SA’s most complete human ancestor — a bone of contention 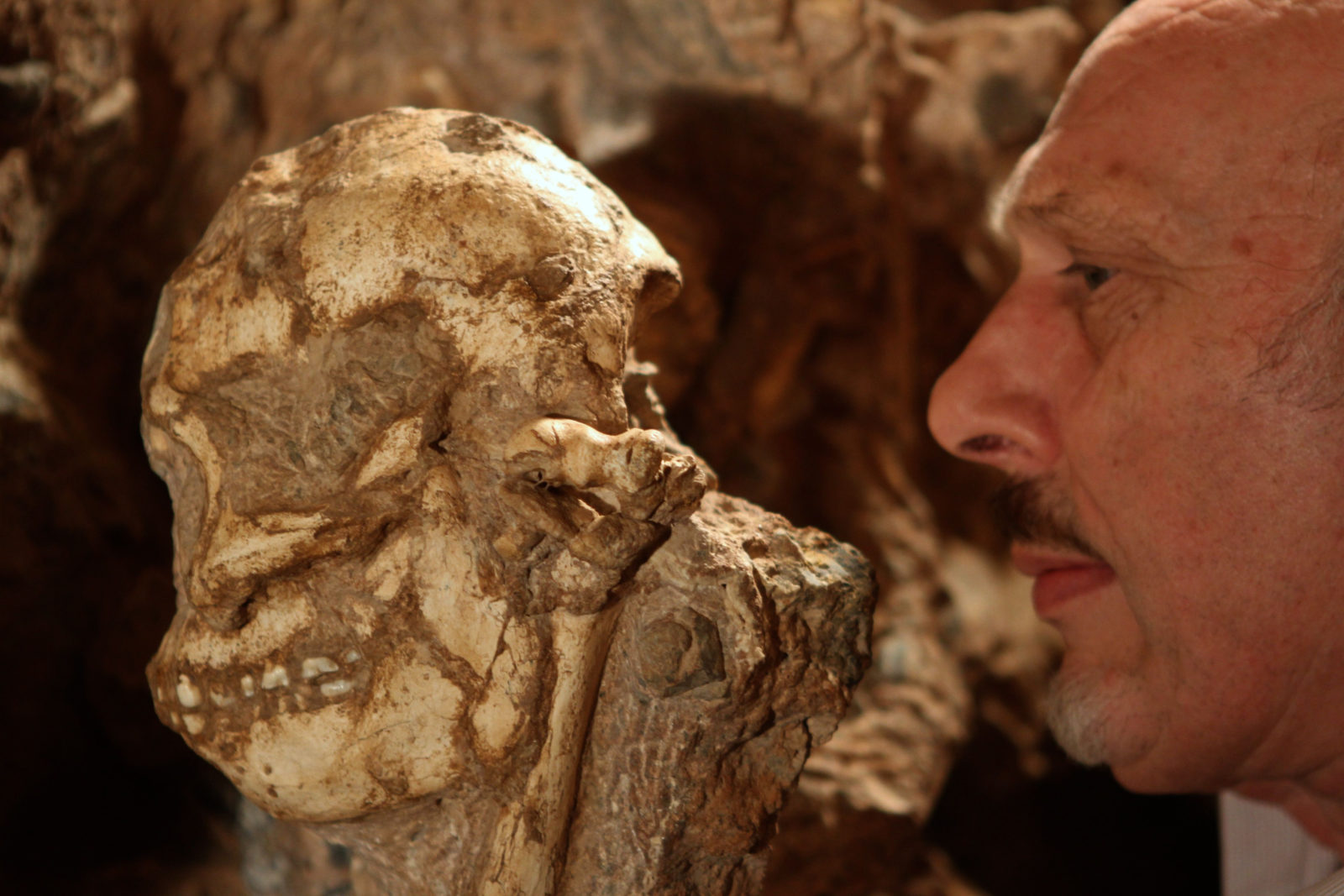 Prof Ron Clarke, with Little Foot, when she was still in the Sterkfontein Caves in the Cradle of Humankind. Photo: University of the Witwatersrand

Little Foot has literally been a bone of contention in the palaeontology community for years. Experts do not agree on the age, and therefore possibly the species.

The remarkable story of Little Foot, the most complete fossil of a human ancestor older than 1.5 million years yet found, was recently described after excavation of 14 years.

In 1994 and 1997, Professor Ron Clarke, from the Evolutionary Studies Institute at the University of the Witwatersrand (Wits), identified 12 foot and lower leg bones of an Australopithecus individual previously misidentified as animal fossils. The bones were stored at Sterkfontein and at Wits.

Clarke and his assistants, Stephen Motsumi and Nkwane Molefe, then looked for and located the very spot where the bones had been blasted out by lime miners decades earlier in a deep, dark part of the Sterkfontein Caves, called the Silberberg Grotto, a large cavern within the cave system in the Cradle of Humankind.

The fossil was given the nickname Little Foot based on Clarke’s initial discovery of four small foot bones.

The history of the work on this 3.67-million-year-old has been described recently for the first time by Clarke in the Journal of Human Evolution.

The 14-year-long excavation and six-year cleaning and reconstruction process of this Australopithecus prometheus fossil has revealed much about the individual: What happened to her after death, as well as how the skeleton was preserved.

However, the age and species of Little Foot, as described by Clarke, has led to much debate for years among other top palaeontologists. They disagree about the age and the species.

It is by far the most complete skeleton of a human ancestor older than 1.5 million years yet found. It is also the oldest fossil hominid in southern Africa, according to Clarke and his paper.

It was the first time that a nearly complete Australopithecus fossil has been excavated in situ in a South African cave. It has revealed that after falling into a deep cave, she was mummified during dry conditions. This left the bone “soft” and flaky.

This was followed by slight displacement of some skeletal parts through slippage on the rock-strewn talus slope in the cave, crushing and breaking some of the bones through rockfall and pressure. Calcification after a change to wet conditions took place, and then a slight downward collapse of part of the cave infill.

This partial collapse left voids that were later filled with stalagmitic flowstone that encased breaks through the femurs.

Clarke told Daily Maverick that Little Foot fell into the cave through a shaft as an intact body. Therefore she was not the remains of a carnivore kill.

“We cannot say for sure why or how she fell into the cave, but I do point out there are many carnivores and monkeys that fell into this natural death trap by accident. It was unlikely that she fell in in the same manner, but it was possible that she was trying to collect fruit from trees around the cave and that she got into an altercation with a large male monkey and both of them fell in.

“We found the fossil remains of such a very large monkey associated with her bones. There are of course other possible explanations, but we will probably never know the real cause. All we can say is that she was the only Australopithecus individual among hundreds of fossils of monkeys and carnivores.”

After the foot bones were found years ago two broken-through shin bones were found in a concrete-like cave infill, and this started the excavation process. First using a hammer and chisel to remove the overburden, before turning to the painstaking process of locating and exposing the bones with an air-scribe (a thick vibrating needle).

Clarke said she has “heavily worn anterior teeth”. What was her diet like? According to Clarke, her teeth suggest she “was concentrating more on vegetation as a food source rather like a gorilla, and using her canines and incisors to strip vegetation and to open hard fruit and/or bulbs. Australopithecus africanus was more omnivorous and probably eating some meat as well as fruits and vegetation, like the chimpanzee. Her teeth being so heavily worn anteriorly, support the above interpretation.”

She would probably have walked upright, more than she would have lived in trees, because her legs are relatively long, compared with her arms. She was 1.30m tall. Clarke said that there are more papers in production, review or revision on the eco-morphology, on the limb bones, hand and stratigraphy.

“Our work will be ongoing beyond these papers as there are still many aspects of the anatomy, external and internal, that need to be pursued.”

The first ever endocast reconstruction of the nearly complete brain of Little Foot reveals a small brain combining ape-like and human-like features, and is published in the Journal of Human Evolution.

The scans reveal impressions left on the skull by the brain and the vessels that feed it, along with the shape of the brain. This research was done by Dr Amélie Beaudet.

While the brain features structures similar to modern humans — such as an asymmetrical structure and pattern of middle meningeal vessels — some of its critical areas such as an expanded visual cortex and reduced parietal association cortex points to a condition that is distinct from humans.

The study has also shown that the vascular system in Australopithecus was more complex than previously thought, which raises new questions on the metabolism of the brain at this time. This might be consistent with a previous hypothesis suggesting that the endocranial vascular system in Australopithecus was closer to modern humans than it was in the geologically younger Paranthropus genus.

“This would mean that even if Little Foot’s brain was different from us, the vascular system that allows for blood flow (which brings oxygen) and may control the temperature in the brain — both essential aspects for evolving a large and complex brain — were possibly already present at that time,” says Beaudet.

The brain is about one-third of that of modern humans.

Criticism: Not all agree — bone of contention

But, not everybody agrees with the analysis of Clarke and others. Little Foot has literally been a bone of contention in the palaeontology community for years. Other experts do not agree on the age, and therefore possibly the species.

Professor John Hawks, the Vilas-Borghesi Distinguished Professor from the Department of Anthropology at the University of Wisconsin-Madison in the US, is currently studying Little Foot, and could not comment on the scientific conclusions. But he was asked to explain Australopithecus Prometheus in the historical context.

“Au. prometheus was a species named by Raymond Dart back in 1948. Dart was a great scientist, but he also had some strange ideas. One of his obsessions was the idea that Australopithecus was a kind of “killer ape”, hunting animals, bashing their skulls and breaking up their bones, and cooking them in fires.

“Makapansgat — where Dart found a partial skull — was a site with blackened and broken bones of many kinds of animals, a huge bone bed. Dart thought that that the blackened and broken bones were evidence for his concept, and so he came up with the name, “prometheus” for the first Australopithecus fossil he found there. There were no stone tools, so he decided that some of the broken animal bones were the weapons and tools of Australopithecus.

“Science since 1960 has shown this was all nonsense. The bones were broken by natural processes, and blackened by manganese within the cave, not fire.

“There are no features that distinguish Au. prometheus. Dart wrote a lot about prometheus, but he based the species upon a single skull fragment. Professor Lee Berger and I published a paper last month that documents how Dart failed to distinguish prometheus from Au. africanus, (such as Mrs Ples) except by his ideas about fire and hunting. Dart himself totally repudiated prometheus in his later work, and the whole field forgot about it.”

But Clarke remains convinced and said he identified many more Au. prometheus in recent years, and that many of their features differentiate them from A. africanus.

“I am not concerned about what others ‘think.’ It is I who have worked for 20 years on extracting, cleaning and reconstructing the specimen and thus I understand it better than they do.”

Little Foot may well turn out to become one of the most interesting debates in science for years to come. She is exceptionally well preserved, very complete and yet again a beautiful example from South Africa’s rich fossil heritage. DM