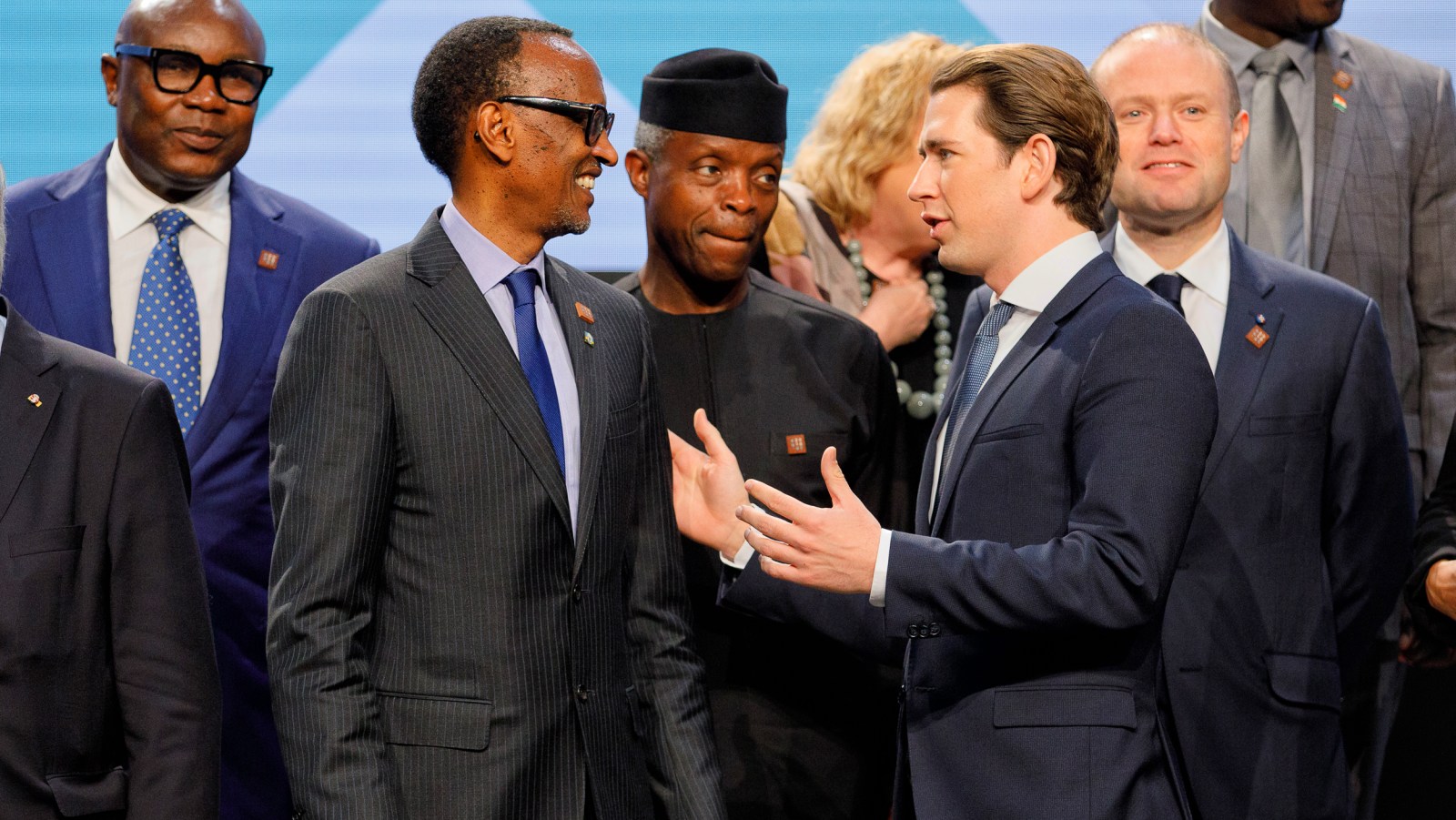 Rwanda's President and African Union (AU) chairman Paul Kagame (front, L) and Austrian Chancellor Sebastian Kurz (front, R) chat during a group photo opportunity at the High-Level Forum Africa-Europe at the Austria Center Vienna (ACV) in Vienna, Austria, 18 December 2018. The forum is an event to provide a space for European and African leaders, together with CEOs of major global companies, innovation champions, start-ups and other stakeholders, to reflect and act on what needs to be done to secure prosperity and competitiveness on both continents as well as to deepen the relationship in all its aspects with a specific focus on taking our cooperation to the digital age. EPA-EFE/FLORIAN WIESER EPA-EFE/FLORIAN WIESER

Austrian chancellor Sebastian Kurz convened a high-level forum between African and European leaders to talk about business partnerships through the digital economy, but the subtext really was migration. Many leaders are, however, still sore about his far-right government’s position on this topic.

It was so cold in Vienna after the first snow of the season that icy remains still lay freezing on the pavements two days after the actual storm. It seemed even colder at the Austria Centre Vienna, about three kilometres outside the city centre, on the eastern side of the Danube River, where the one-day Africa Europe High Level Forum on digitisation took place on Tuesday, 18 December 2018. Even though it wasn’t a formal African Union / European Union summit – like the one that happened just over a year ago in Abidjan – it was high level enough to matter, with African Union Commission chairperson Moussa Faki Mahamat, President of the European Commission Jean-Claude Juncker, in attendance, as well with the obligatory Austrian federal chancellor Sebastian Kurz, who organised the forum, as well as his counterpart, African Union chairperson Paul Kagame, who acted as co-host.

Kurz is a controversial figure, and there’s been much unease about his presidency of the Council of the European Union in the past six months. This forum was supposed to be the highlight. After all, the presidency only comes to each country around once a decade. A 32-year-old, Kurz has even more youthful, boyish looks than his French counterpart, Emmanuel Macron, or his Canadian peer, Justin Trudeau. But his youth – he’s one of the youngest leaders in the world – isn’t what is making leaders of many European countries uneasy. The conservative Austrian People’s Party (ÖVP) that he’s heading, is in a coalition government with the far-right populist Freedom Party (FPÖ), and that is what worries European leaders, even as many of them are trying to contain extremist forces within their own borders.

Austria has made itself some more enemies by leading a charge from within Europe against the global migration pact in Marrakesh earlier in December. Hungary, Poland, Slovakia, the Czech Republic, Latvia, and Italy added their voices to that of Austria from the European side to reject the Global Compact for Safe, Orderly and Regular Migration. The United States and Austria also pulled out of the process. The pact is about a framework for international cooperation aiming to reduce illegal migrants, help integrate migrants, or repatriate them to their original countries. It would make migration a little safer.

“Austria’s view really is opposed to that of the European Union,” an official who attended the high-level forum said. “There has been a lot of discomfort with its presidency.”

Mahamat seriously side-eyed Austria at Tuesday’s summit when he said during the opening session:

“I was recently in Marrakech where many EU states didn’t sign the global compact on migration, even though it’s not binding. We must not let political difference divide us. Initiatives such as promoting the digital economy can in itself provide solutions.”

He also said what was needed was a “situation where we can provide training and young people can develop”. It was not about “charity and handouts for the African ‘problem’”, but speaking to societies about reaching their potential.

There were reports that this discomfort with Austria led countries like France and Germany to snub the forum by sending lower-level delegates. According to the official list, Germany sent the Personal Representative of the German Chancellor for Africa, Günter Nooke and France sent the Secretary of State from the Ministry for Europe and Foreign Affairs, Jean-Baptiste Lemoyne, as opposed to Hungary, Poland, Slovakia and the Czech Republic, who all sent their prime ministers.

According to South African officials, President Cyril Ramaphosa decided to give the summit a miss, sending Communications Minister Stella Ndabeni-Abrahams instead. Ramaphosa has gone to great lengths in the past months to attract investment to South Africa, but cosying up with Kurz was possibly a bridge too far. From the African side, Egypt, Mauritius, Kenya, Rwanda and Ghana sent their heads of state, while Ethiopian president Sahle-Work Zewde was also there. The summit plenary became very empty towards the afternoon as it ran over its schedule, prompting Auma Obama, from the Sauti Kuu foundation, to lament that she had come all this way to be heard, and there was almost nobody left in the hall to hear her. The same was true for Ndabeni-Abrahams, who was up a few minutes after her, but who didn’t mention the deserted hall as she read off her pre-prepared speech, littered with policy jargon.

The summit was touted as talks between the two continents on how to leverage off the digital economy in order to develop a relationship as equals, but the subtext was that this would stop migration. In a September report about the planning of the forum (then punted as an EU-Africa summit), the migration issue was an important reason why European leaders wanted to see more development in Africa – ostensibly so young Africans could find more reasons to stay in the continent.

In his opening speech, Kurz said:

“We now have to change the way we look at Africa. We must not think exclusively of poverty, the threat of migration and a lack of respect for human rights. What is required now are encounters of an honest partnership.”

Kagame, however, warned that the success of business cooperation shouldn’t be measured “solely in terms of migration statistics”. He added: “A much better yardstick is how creating high-quality digital jobs in Africa will also boost job growth in Europe.”

While the AU-EU summit in Abidjan a year ago focused mostly on how to tackle the migration problem – it happened to the backdrop of reports on refugees being forced into modern slavery by traffickers in Libya – Mahamat said the high-level forum was “an opportunity for us to share thoughts with the private sector”. Responding to a question at the lunchtime press conference on how migration was discussed at the forum, Mahamat said migration tended to take over meetings of this kind, “but we must avoid being fixated on it”. He further said migration existed, but needed to be managed effectively. “Young people in Africa don’t want to leave Africa to come to Europe, but they come to Europe because of war and conflict, and they should be treated humanely.” He said, however, migration needed to be dealt with “at an earlier stage” by creating jobs, opportunity and peace on the African continent.

Unlike formal summits, the forum didn’t produce resolutions or a communiqué. Juncker did, however, reiterate the EU’s commitments towards development in Africa, such as the €44 billion committed earlier this year for its external investment plan. Two agreements were signed about the support of small and medium-sized enterprises by means of guarantees, an investment of €75 million for 800,000 jobs, and €50 million to support the Africa Continental Free Trade Agreement. Outside of this, the forum was in effect a talk shop and an opportunity to get a taste of what Vienna feels like in winter. DM

(The Austrian Chancellery paid the air travel and hotel accommodation to enable attendance of the summit.)