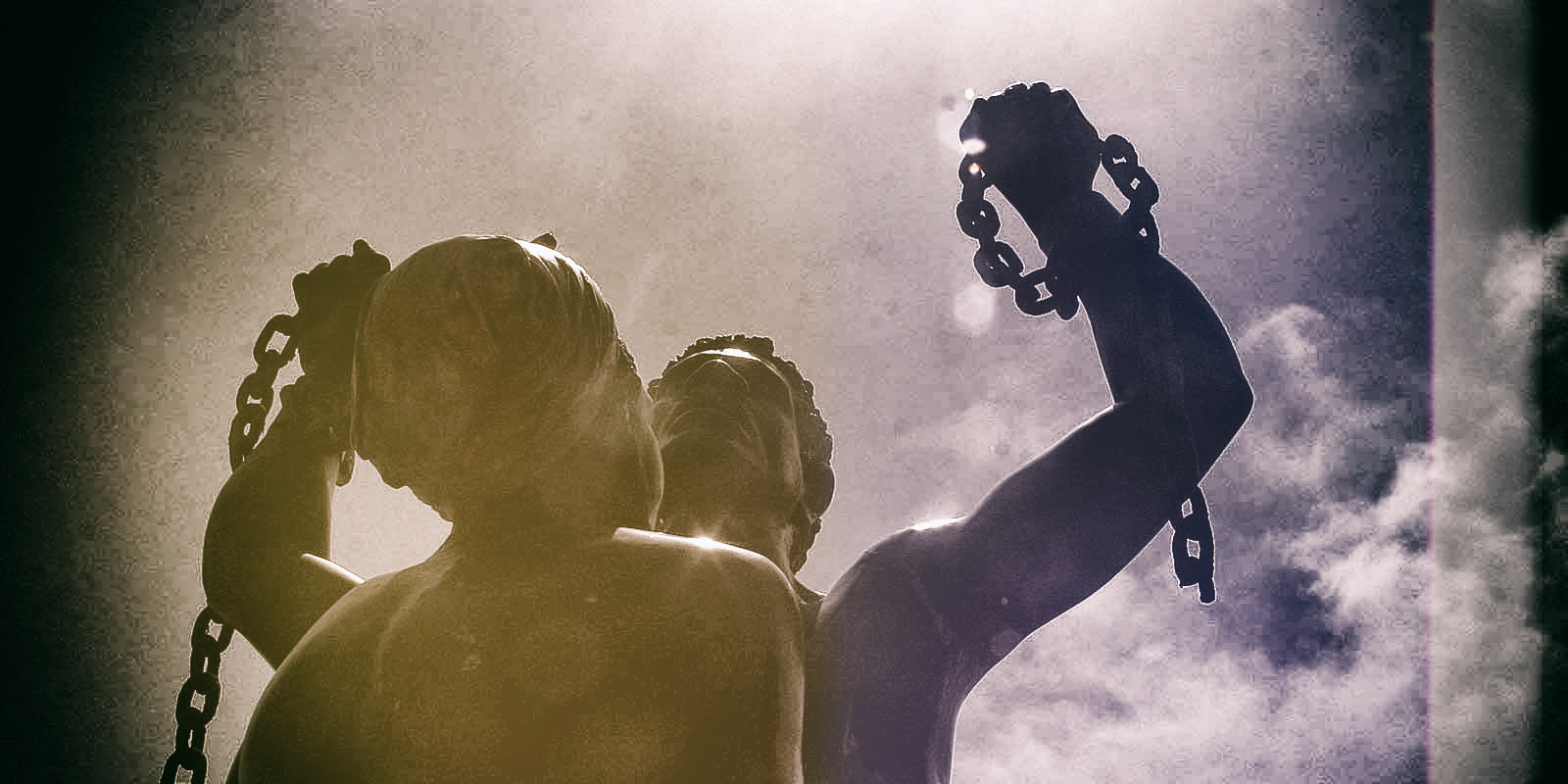 Statue celebrating the abolition of slavery on Goree Island, off Dakar, Senegal, Tuesday 09 May 2006. EPA/PIERRE HOLTZ

Racial pessimism lies at the heart of the liberal democratic system, with racism embedded in the very order of what is presumed to be freedom.

In his closing keynote address to a conference examining the reverberations of history at Stellenbosch University, historian, political scientist and public intellectual Professor Achille Mbembe addressed the topic: The Trauma of the World, and the World as Trauma.

Introducing his audience to the notion of an African and diasporic archive of history and thinking, Professor Mbembe said the archive, for the most part, was a meditation on trauma… on what it is to live with trauma and how to return to life after trauma. In modern thought, trauma was also “the lens through which struggles for the universal have taken on very specific meaning”.

The question of historical trauma-focused on the human, the body and psyche, but what constitutes humanity was often left uninterrogated.

“The human in question has always been a bit less than human,” he proposed.

Political histories of trauma were not simply about humans, but also about objects, things and commodities. Professor Mbembe said, with regard to capitalism, the African and diasporic archive essentially exhibited two characteristics: An economic system of capture and extraction; the capture of bodies and extraction of labour. It also exhibited “a certain mode of production and distribution of things”, categorising, separating and creating equivalences between persons and things.

Capitalism had to do with making certain classes of people, who are removed from being regarded as part of humanity and assigned other roles. It sought to separate usefulness from waste.

Human-hood as the antithesis to thing-hood was central to a modern understanding of emancipation, justice, restitution, reparation and therapy, he said.

The question of “Care and Repair” saturated the African and African diasporic archive; how to fix that which has been broken saturated literature, theology, poetry and music.

Invoking the example of slavery in the United States, Professor Mbembe said slavery wasn’t simply a matter of social death. Work on rituals, language, memory and the substance of life never stopped.

Making sense of this aspect of the African and diasporic archive required a new voice. The archive was incomplete. Writing about trauma and healing required embracing the fact of its incompleteness while opening up the possibility of speaking with a voice as full as possible. A supplement was necessary, the professor suggested, “framed out of the debris and remains and trauma left behind by those who passed before us”.

“The voice must shift because it is dealing with washed lives led by people who did not have choices, but had to create some kind of life in the brutal conditions in which they found themselves… How do we retrieve these people?”

In order to rupture with terrible histories, violence that opened up the possibility of another way of seeing the world may be absolutely necessary. Caribbean psychiatrist and post-colonial theorist Frantz Fanon was an important exponent of this theory, though he was aware that violent processes were difficult to control or predict.

Professor Mbembe appealed to students of history to read Fanon carefully. Fanon did not believe that all forms of violence were therapeutic. He made an important distinction between violence with liberatory potential — which interrupted the system and introduced the possibility of companionship, of re-inventing the human and creating “a new species of man” — and violence that was mostly self-inflicted or against people of similarly low status.

Professor Mbembe warned that humans were entering a new age of capitalism characterised, at least partly, by technological escalation, which in itself was presiding over the emergence of an entirely new figure of a human that was wired and irreversibly tied to one or other form of device or object.

The emergence of the human-cum-device is an event the magnitude of which we have not yet appraised as we should, he said. It seemed that the biggest dilemma today (of course, besides exploitation) was not to be exploited at all.

Referring to the number of people who had rung his doorbell in Johannesburg looking for any type of work, Professor Mbembe said:

“More and more people have become superfluous. More and more, it is not about being exploited, but about not being in any position to be exploited any more.”

Questioned by a member of the audience (it was a public lecture) on whether he thought transitional South Africa had over-emphasised reconciliation, above “reparation and physical apology”, Professor Mbembe said reconciliation meant little without justice.

“We cannot be talking rhetorically about reconciliation if we are not talking about justice… actual acts of justice, of caring and repairing that which has been broken…”

Justice required repairs to “all infrastructures of life”, from addressing the environment rendered toxic to creating mechanisms to share scarce resources and develop economic policies that leave no one behind. DM

Professor Mbembe is attached to Wits University. He was addressing the Recognition, Reparation, Reconciliation – The Light and Shadow of Historical Trauma conference, that brought some of the world’s leading postcolonial theorists and researchers to Stellenbosch. The conference was chaired by Professor Pumla Gobodo-Madikizela, Professor of Historical Trauma and Transformation at Stellenbosch University and former commissioner of South Africa’s TRC. The writer reported on the conference for its organising committee.