Mercedes-Benz A250 Sport: A class act 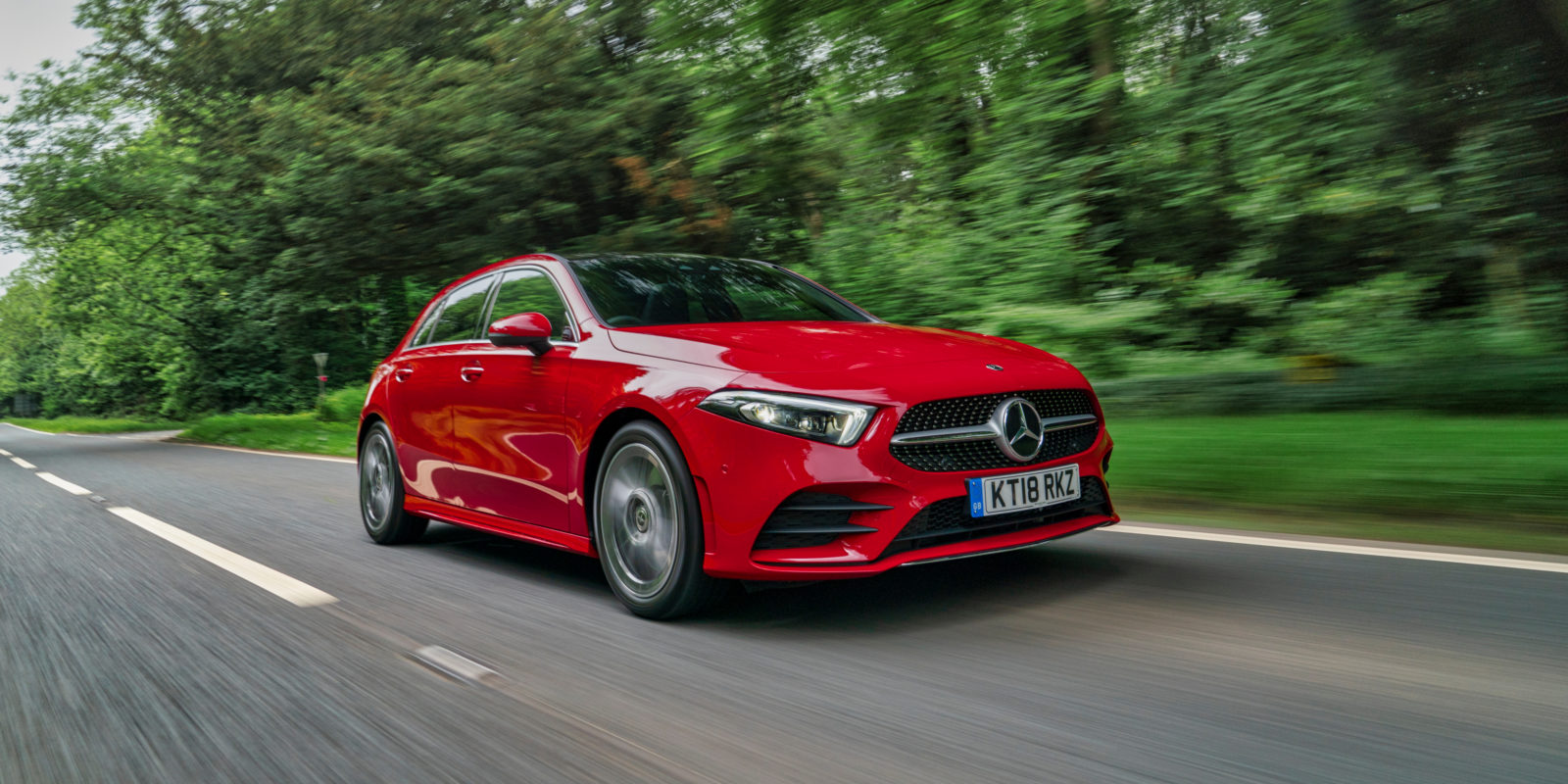 With an innovative cockpit and hi-tech user interface, nimble dynamics and plenty of kit, the fourth-generation A-Class finally has what it takes to tackle its rivals from Audi and BMW. But does it have the character to go with the class?

The A-Class story didn’t start auspiciously. Admittedly, the first-ever small Mercedes-Benz was both daring and innovative, but its driving dynamics let it down. 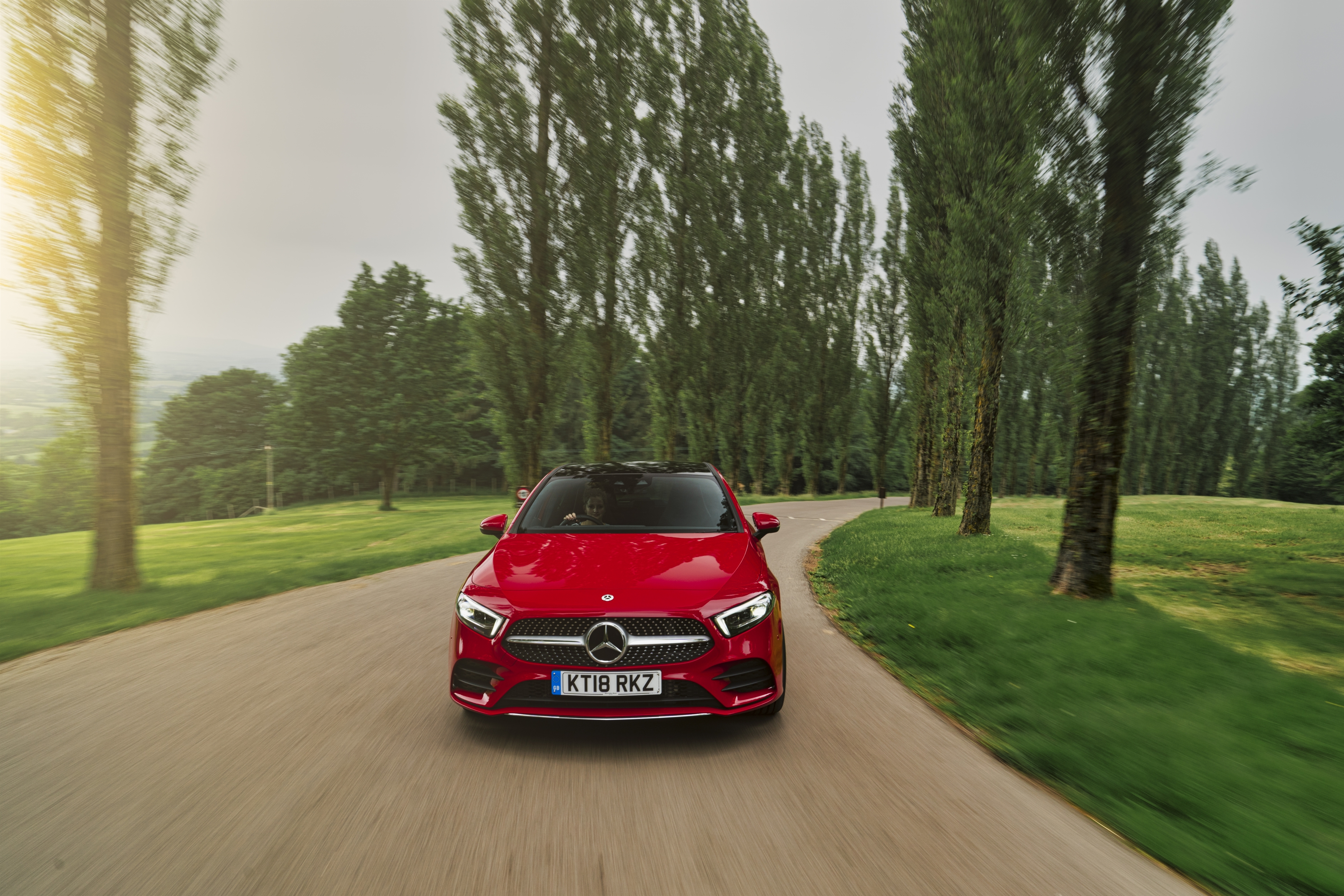 The tall shape and elevated stance predicted a trend favouring small form factor compact SUVs long before they became fashionable. And the double-floored chassis represented a unique and innovative approach.

However, when the tall (and ungainly) A-Class infamously rolled its way out of the so-called elk test – a handling test emulating a sudden evasion manoeuvre – the car’s fortunes took a tumble for the worse. That was 21 years ago.

After the elk test disaster, you’d have been forgiven for believing that the marque’s small car aspirations were all but thwarted. 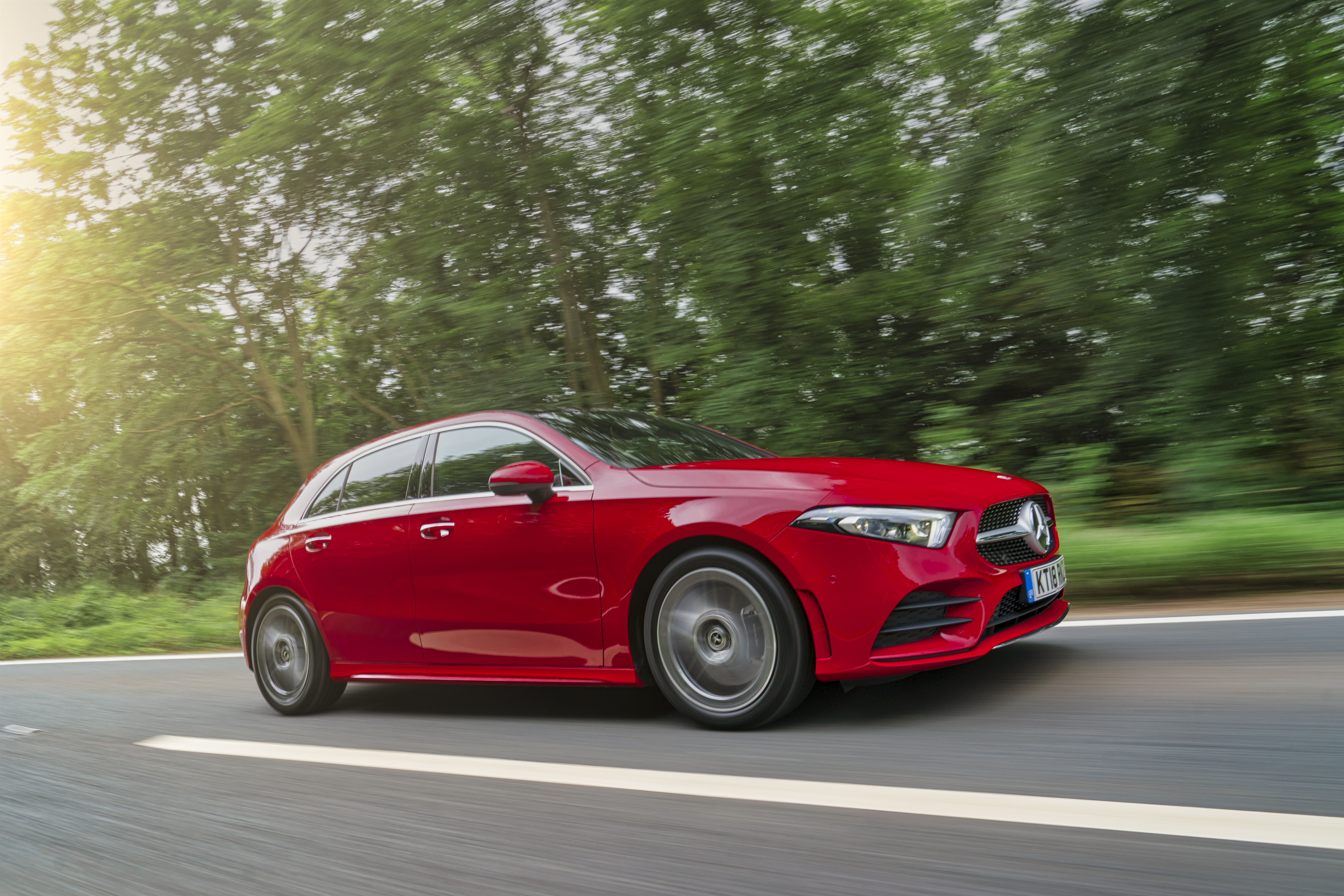 But the handling maladies were addressed soon enough, and owners of that first-generation A-Class and its similarly shaped and configured successor remain among the Three-Pointed Star’s most loyal customers.

A more conventional, hatchback-shaped A-Class arrived in 2013, bringing it more closely in line with its direct BMW 1-Series and Audi A3 rivals. By the end of 2017, the total A-Class sales tally across three generations exceeded 3-million units, proving that the elk test didn’t dampen buyer enthusiasm that much, after all! 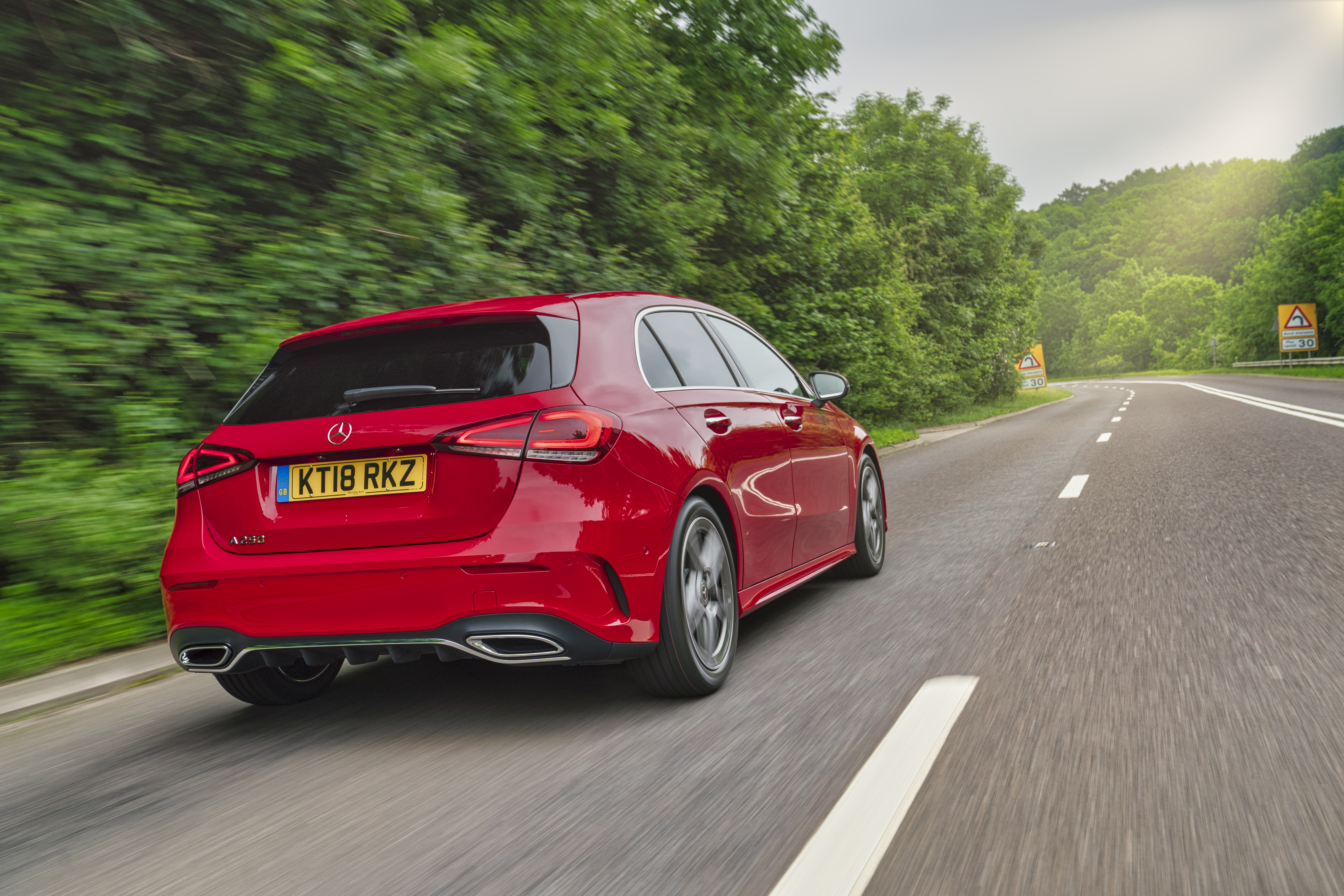 Which brings us to the latest, Gen4 A-Class, a car that may not look radically different from its immediate predecessor, but is both larger and more streamlined. It also encompasses an entirely new engine range.

But what really sets this new A apart from its forebears is the innovative way it interacts with the driver. Dubbed MBUX (for Mercedes-Benz User Experience) it employs a mix of tactile, visual and voice-driven interfaces to allow intuitive access to the car’s multimedia functions. 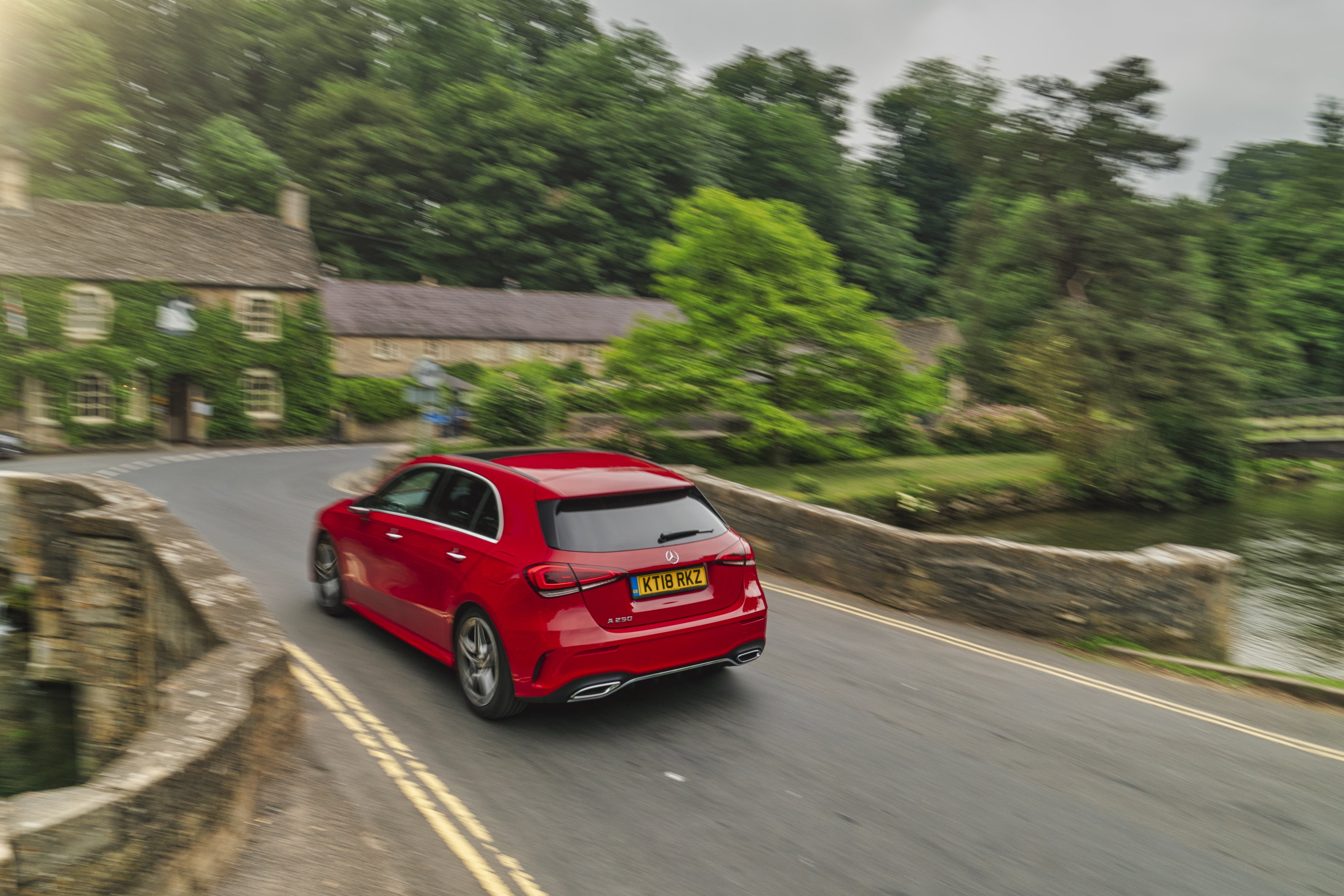 Voice control, although nothing new in the motoring world, achieves a new level of convenience. Taking a leaf out of Apple’s Siri book, it allows natural phrasing of questions and commands, while artificial intelligence lets the car adapt to its owner’s needs and preferences.

The more you use MBUX, the better it gets. Soon, it knows which radio stations you prefer, what temperature the air-con should be set to, and what your favourite destinations are. All it takes is saying “Hey Mercedes” out loud, followed by your instruction. 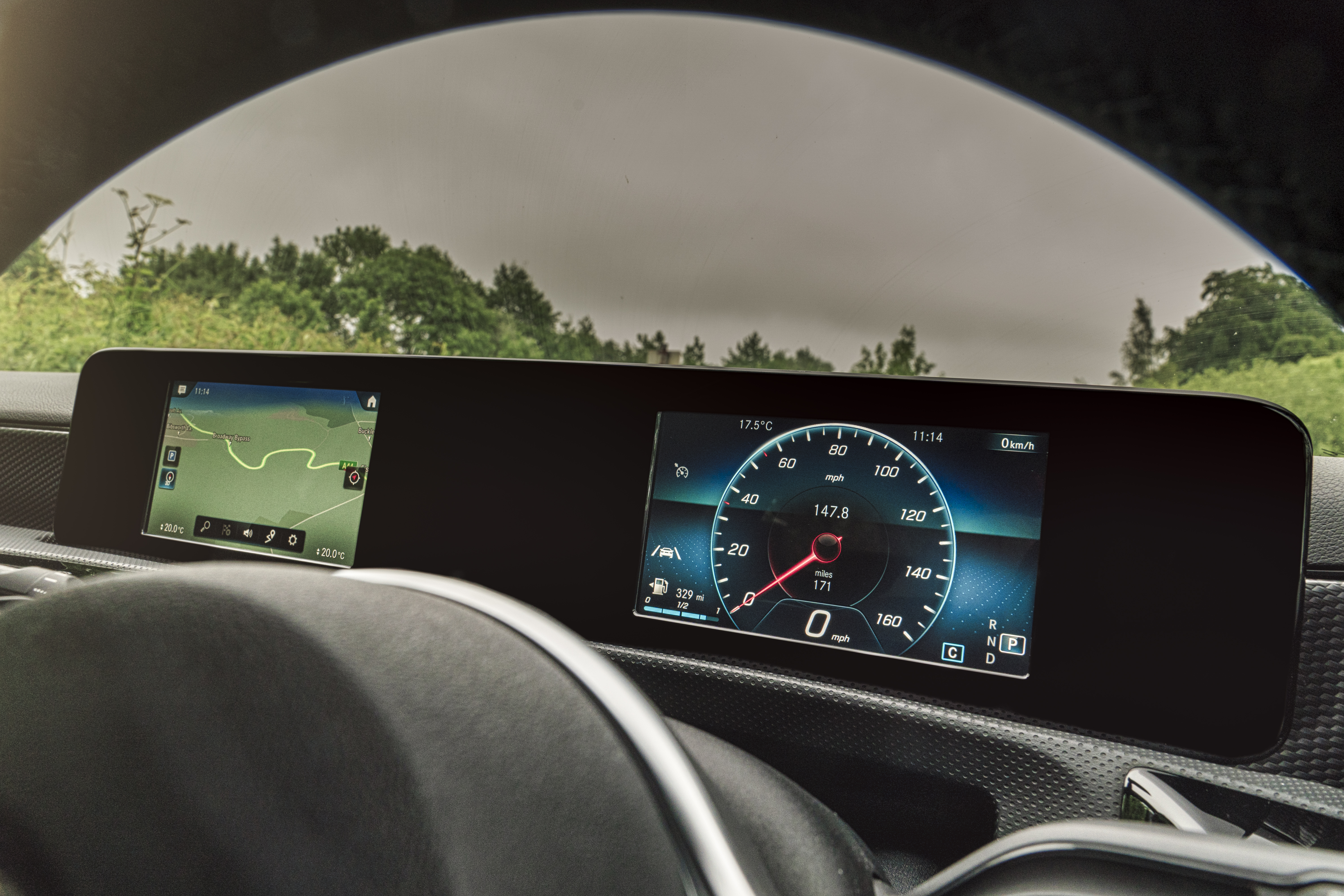 Visual confirmation of the innovation encapsulated in the A-Class comes in the form of a dashboard that is unashamedly futuristic and unlike anything else in this segment.

Instead of a conventionally arranged instrument cluster and separate touchscreen, the fascia is home to a prominent, almost cabin-wide expanse of dark glass. It encapsulates dual screens offering virtual instruments ahead of the driver, and a centrally positioned touchscreen for the infotainment system.

The touchscreen is partnered by a generously dimensioned touchpad in the centre console, while small touch-sensitive controls on the multifunction steering wheel act as a further, tactile gateway to the system’s features and functions.

The arrangement also makes for less clutter – a shortcoming of the previous A – and a much higher level of user-friendliness, despite the complexity of the system and its extensive features list.

Because the new A-Class is bigger, and the cockpit less cluttered, the interior feels more inviting and more spacious, with high-tech materials and finishes adding to the futuristic theme. 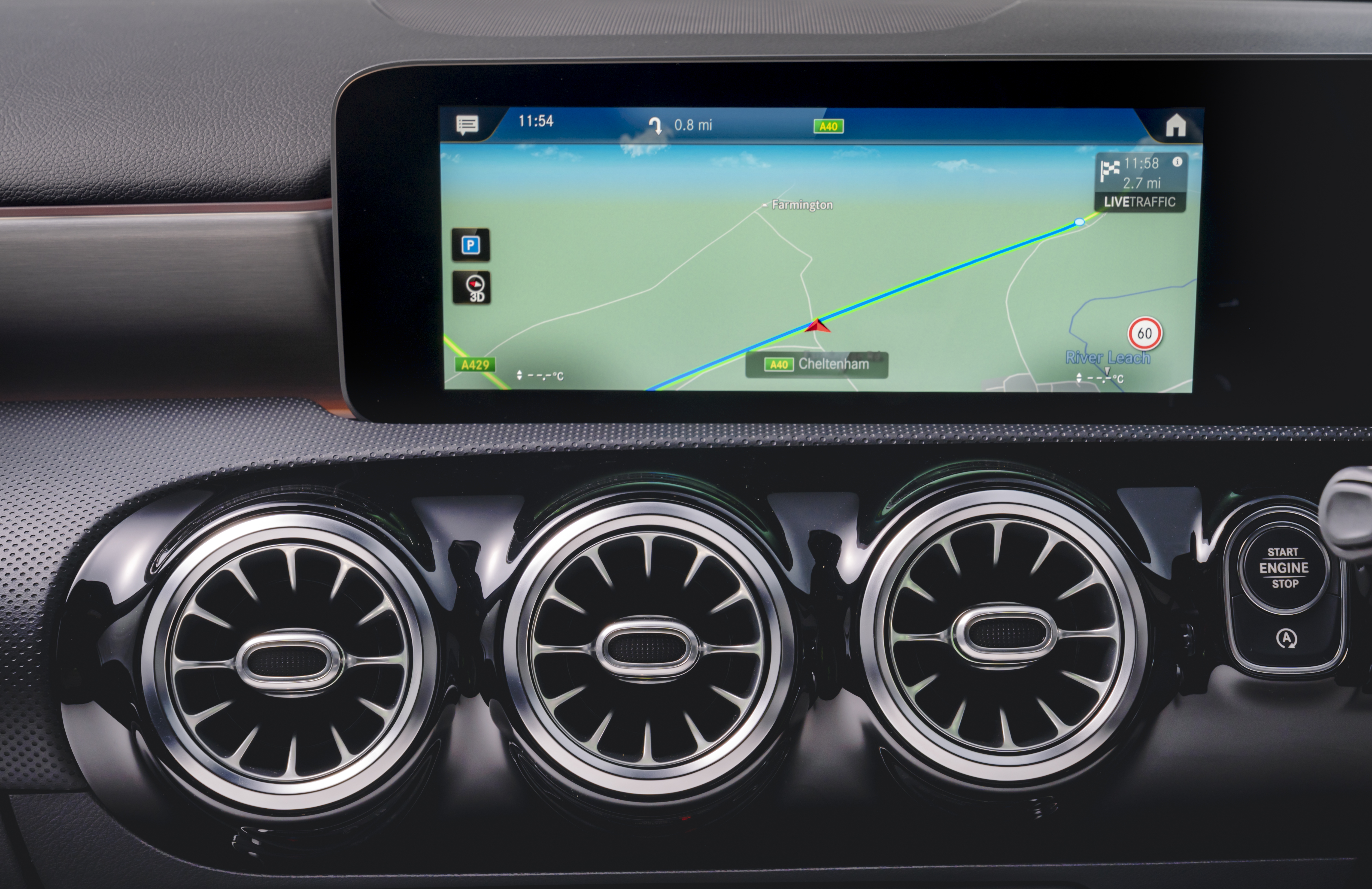 My test car was the current, range-topping A250 AMG-Line, which comes with suede-like upholstery for the high-backed front seats and the sculpted rear bench. Contrasting stitching, pleasantly textured and visually appealing surfaces, and metallic accents contribute to a young and even adventurous ambience.

There’s significantly more cabin space, too, especially at the rear, where shoulder, elbow and headroom have been upped by 22mm, 36mm and 8mm respectively. That doesn’t sound like much, but the improvements are very real in practice.

The boot has gained an extra 29 litres of luggage space, bringing the total to a useful, if not exactly generous, 370 litres. Plus, you have to make do with a space-saver spare wheel … 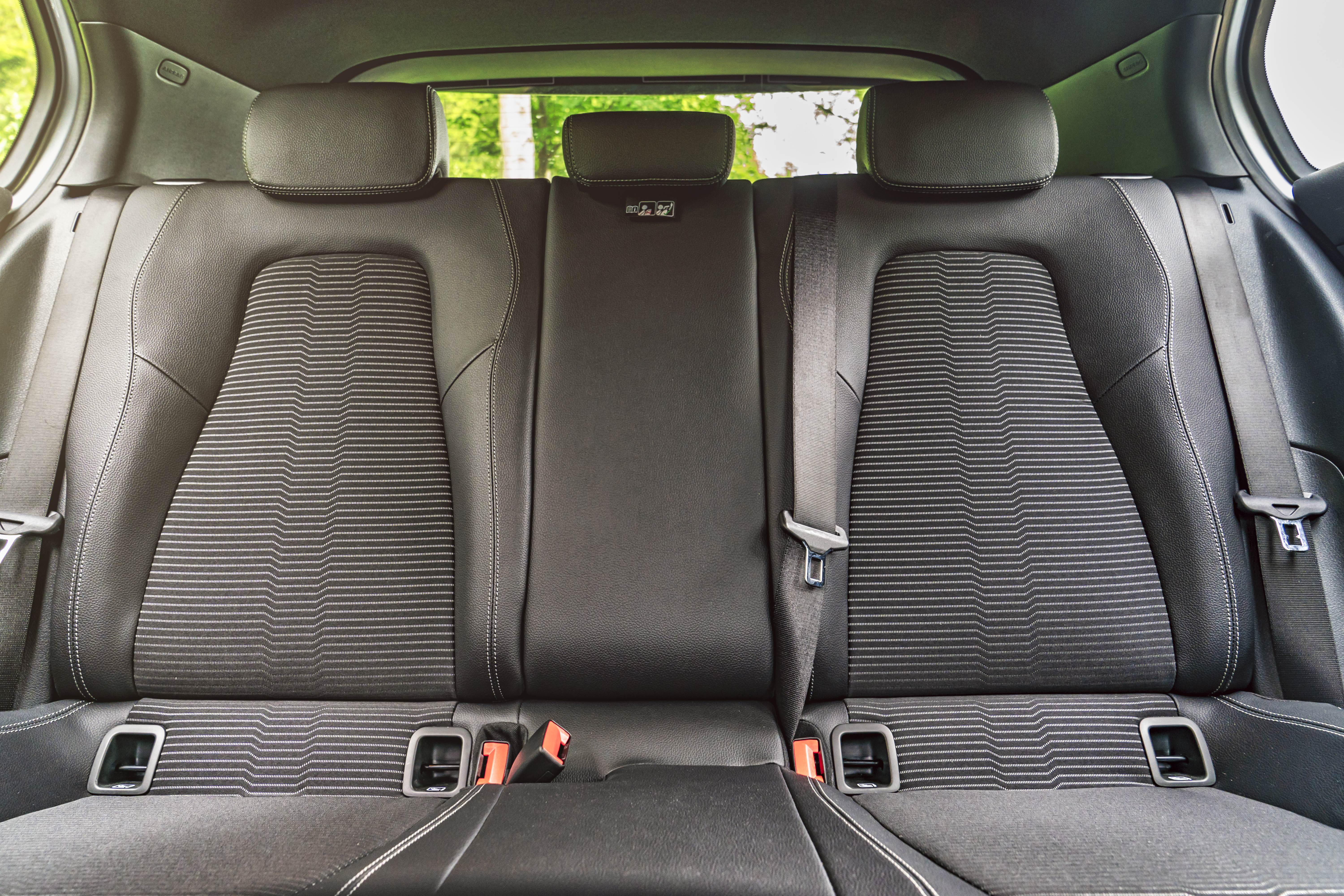 The extra roominess is due to the A-Class growing substantially. It’s 120mm longer and 16mm wider, while the wheelbase has increased by 30mm. Even so, it weighs 20kg less, which bodes well for both performance and efficiency.

Visually, the newcomer looks similar but more muscular than the previous model. The extended nose has been retained, now culminating in the more upright, more aggressive grille treatment currently favoured by Mercedes-Benz.

The rear highlights twin chromed exhausts set in a stylised diffuser with chrome trimmings, and a tailgate that opens wide, intersecting the LED taillight clusters in the process. 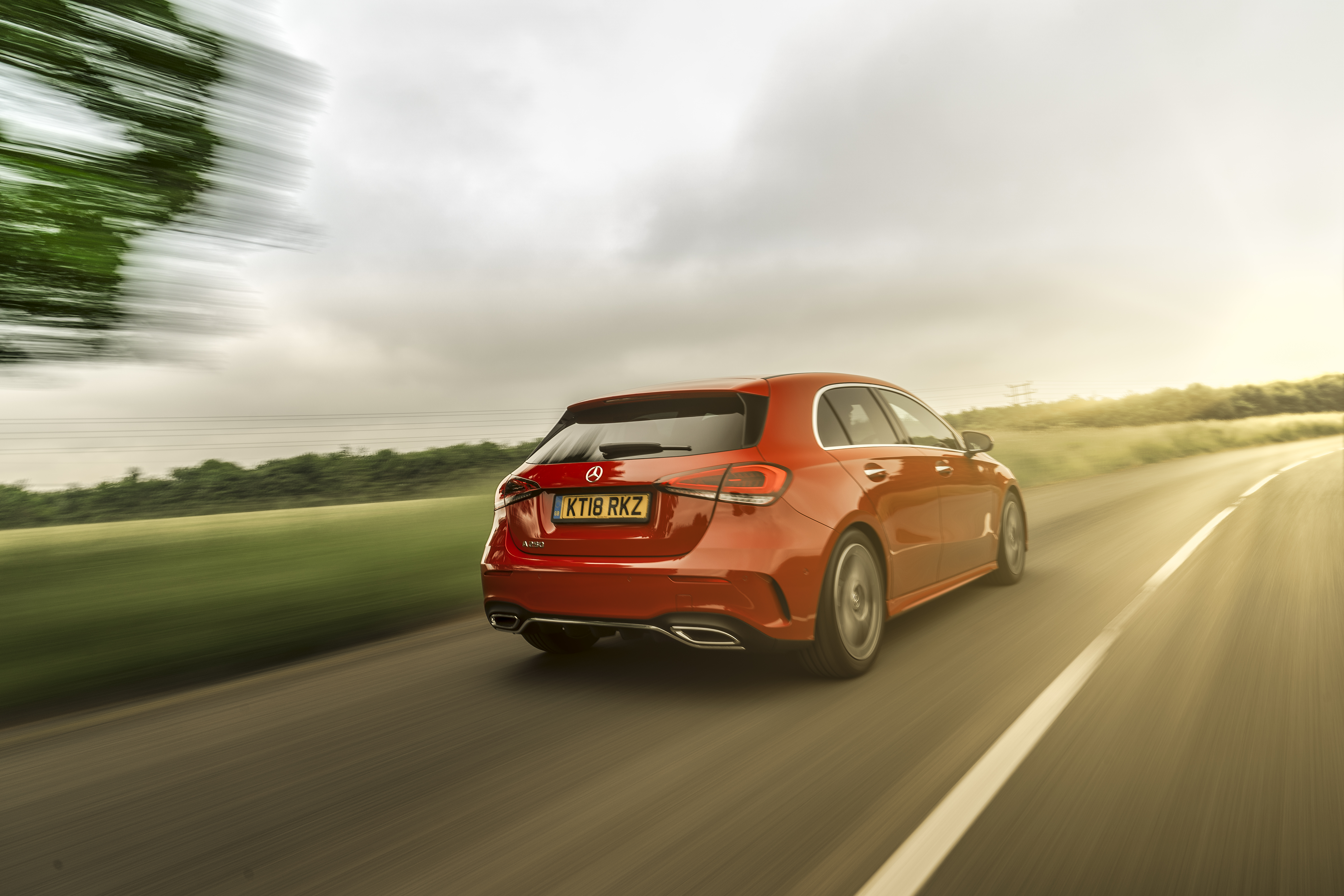 The A250 gains a new turbo petrol engine. The four-pot, 2.0-litre mill links 165kW to a generous 350Nm, the latter already on the song from 1,800rpm. Drive is to the front wheels via a seven-speed dual-clutch gearbox which can be used in full auto mode, or operated manually via shift paddles behind the steering wheel.

The dynamic promise created by the A250’s sporty appearance isn’t an empty one: if anything, the new A feels livelier and more spirited than expected. It’s not a superhatch, but there’s enough motive heat to get the pulse racing.

A drive mode selector allows the A250’s road manners to be tailored to suit personal preference and prevailing conditions. It allows parameters such as steering, gear shifts and throttle response to be sharpened, adding further driver appeal.

The A250 offers a dynamically cohesive experience. The hatch feels planted and composed, with a suspension that’s stiffer and more communicative than expected, but qualified by a vital refinement on bumpier terrain.

The steering is sharp and accurate, but can’t quite deliver the tactile heft and loading when driving with intent. Even so, the chassis is communicative enough to ensure driver engagement – and the harder you drive, the better it gets. 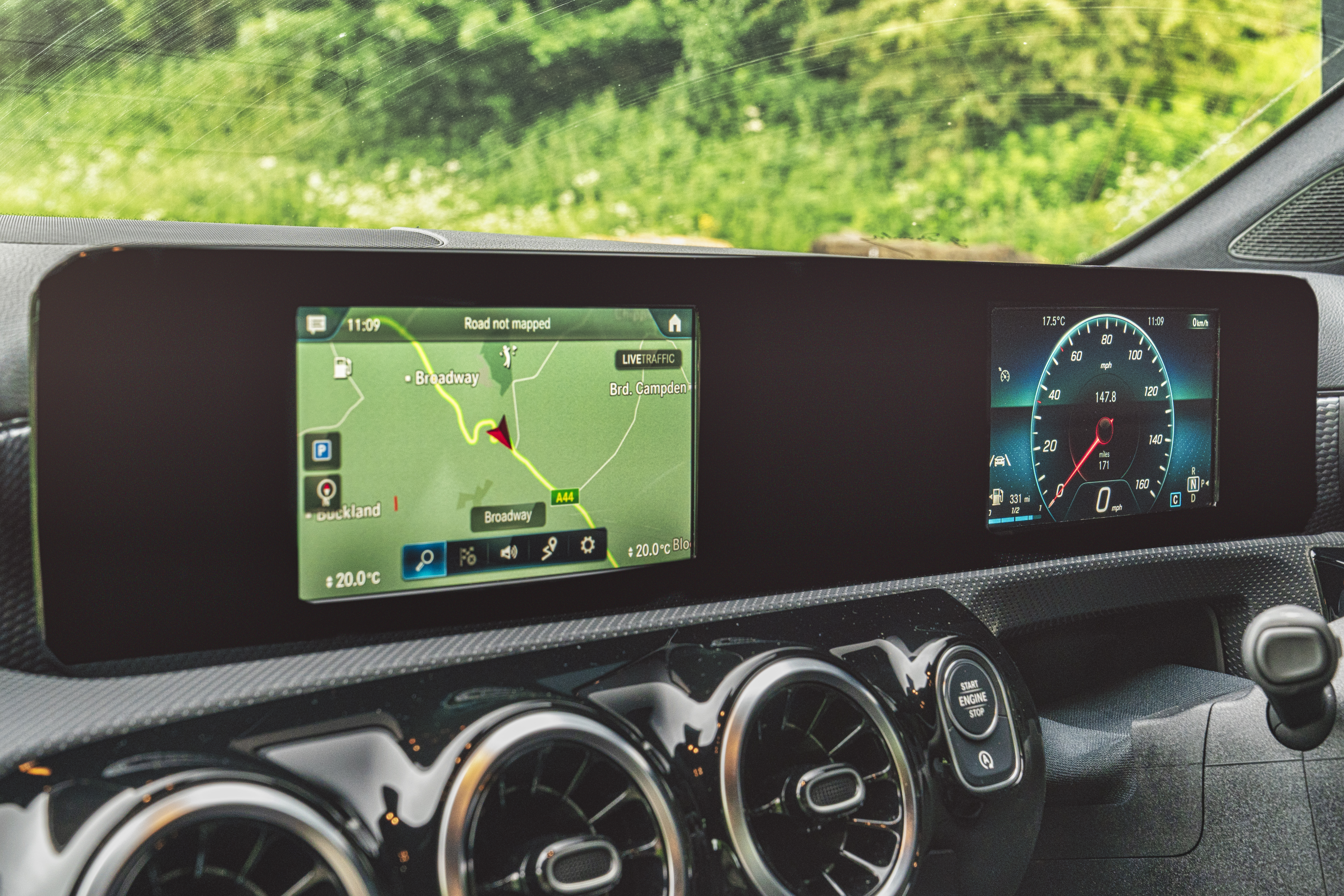 The Merc tucks into the tight with assertive intent, and won’t easily succumb to nose-wide understeer, even at enthusiastic entry speeds. There’s an overriding sense of precision that boosts confidence, and contributes to an enjoyable driving experience.

Compared to its predecessor, this A is a more engaging, more entertaining and more satisfying car to pilot, and while it doesn’t deliver the hell-for-leather thrills promised by the upcoming A35 performance hatch, let alone the A45 ultrahatch, it’s certainly swift enough for daily driving.

Most drivers will find the acceleration more than ample, confirmed by a claimed 0-100km/h dash in the low 6sec bracket, and a wholly academic 250km/h top speed. 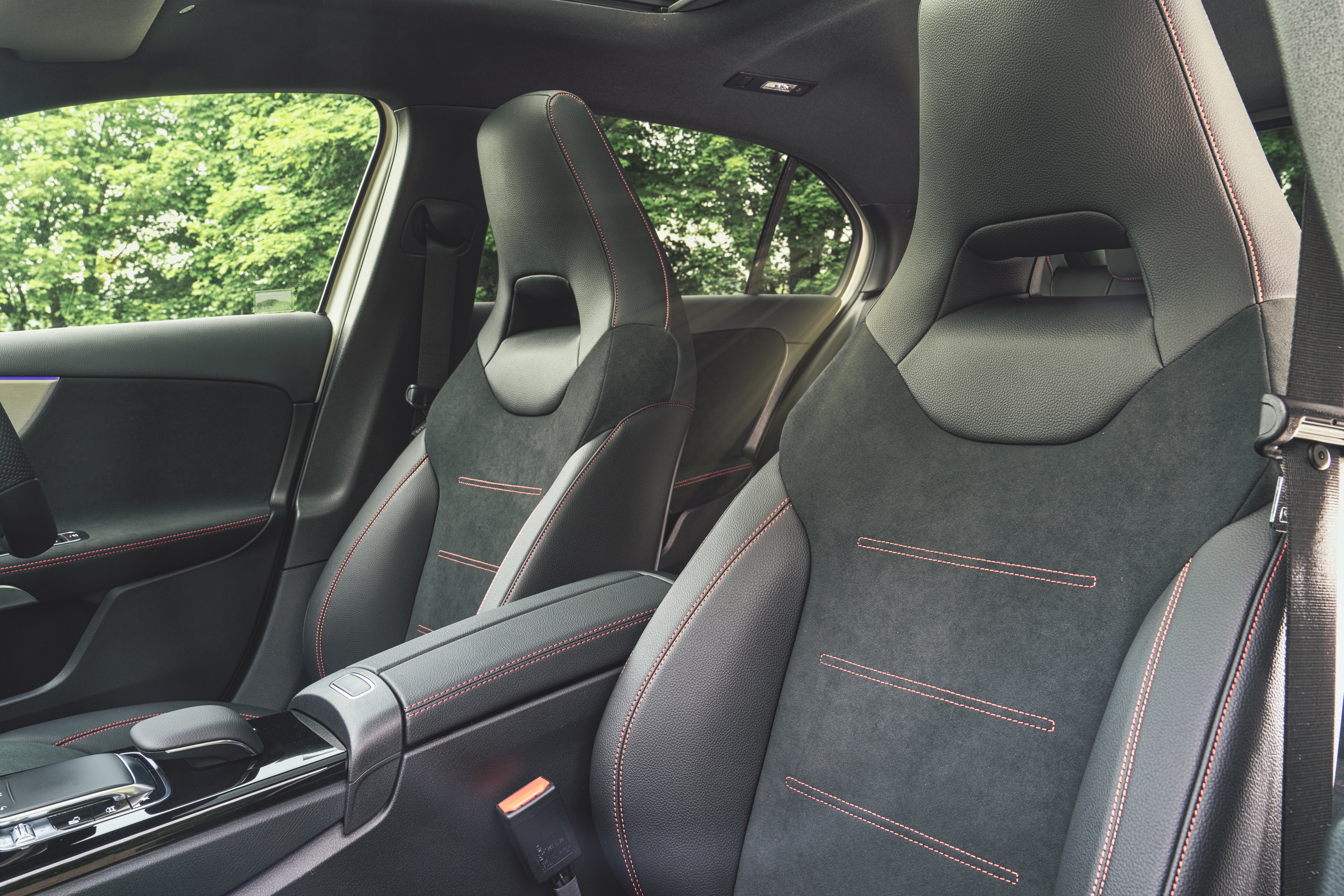 All that emphasis on aerodynamics, drivetrain efficiency and reduced mass should translate into more frugal fuel consumption – and it does if you have a disciplined right foot.

Driven responsibly, the A250 should get close to the claimed 6.5 litres/100km combined-cycle consumption claim.

However, those who want to relish the Mercedes compact’s dynamic capabilities will find the car becoming commensurately thirstier: my test average was in the high 8 litres/100km bracket, but it was worth it.

And that’s really the bottom line here: the A250 is not only a better, more sophisticated and certainly more advanced expression of the A-Class formula, but also a much more engaging one that encourages full use of its dynamic talents.

The VW Golf GTI has always been the benchmark in that department, but for around R50k more before extras, the A250 offers a very competitive, more upmarket and certainly more innovative alternative. Admittedly, the upcoming Golf 8 might change that. 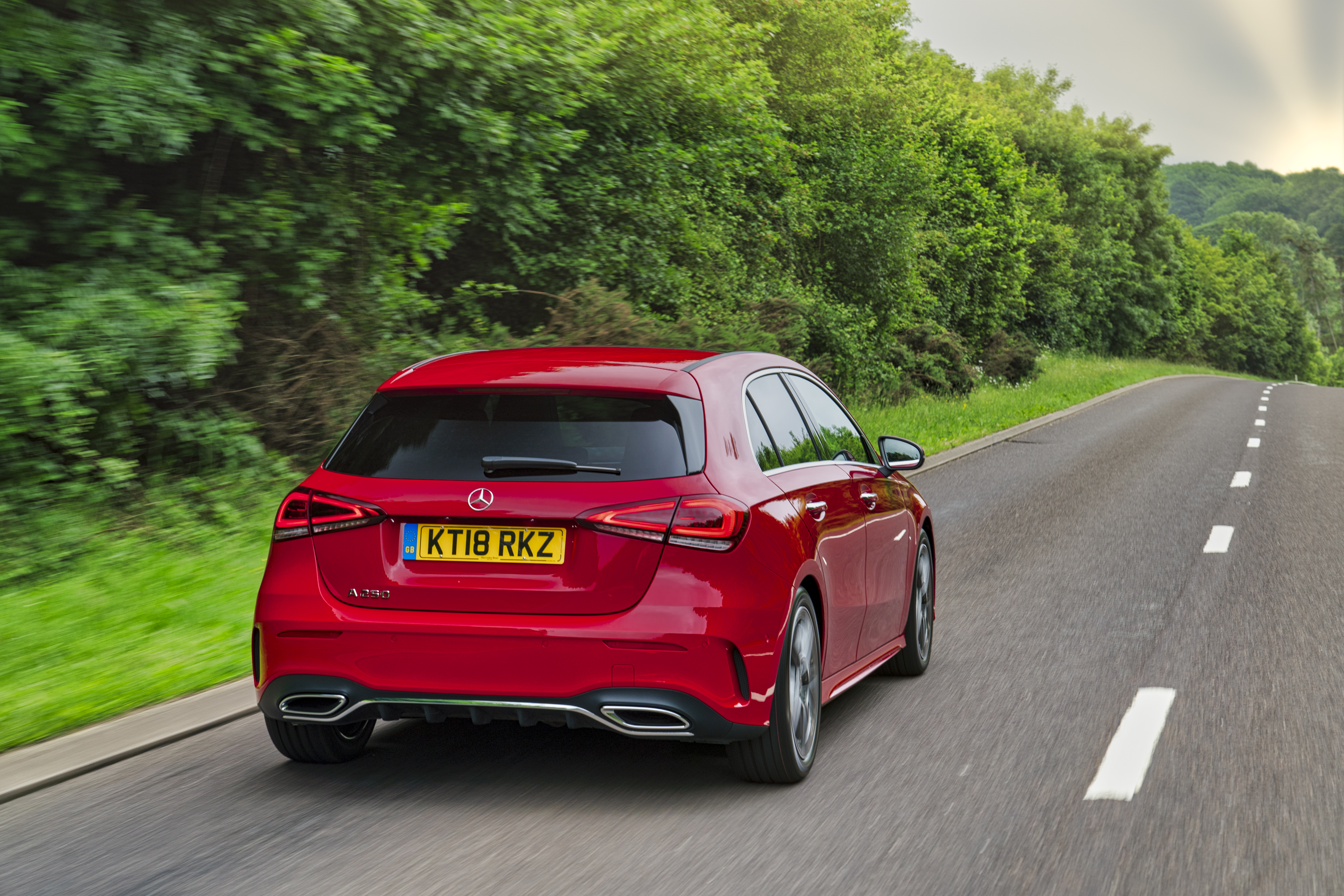 As for its more traditional Audi A3 Sportback and BMW 1-Series rivals, none offer a direct competitor to the A250 AMG-Line, further opening the door of opportunity for the Stuttgart express.

Add the high-tech appeal (and intuitive capability) of the MBUX system, and the new Mercedes-Benz A250 emerges as a compelling and unexpectedly characterful player in the premium hatchback space. Audi and BMW have some work to do … DM

Extras can be expensive.