How the EFF dominates the disinformation market 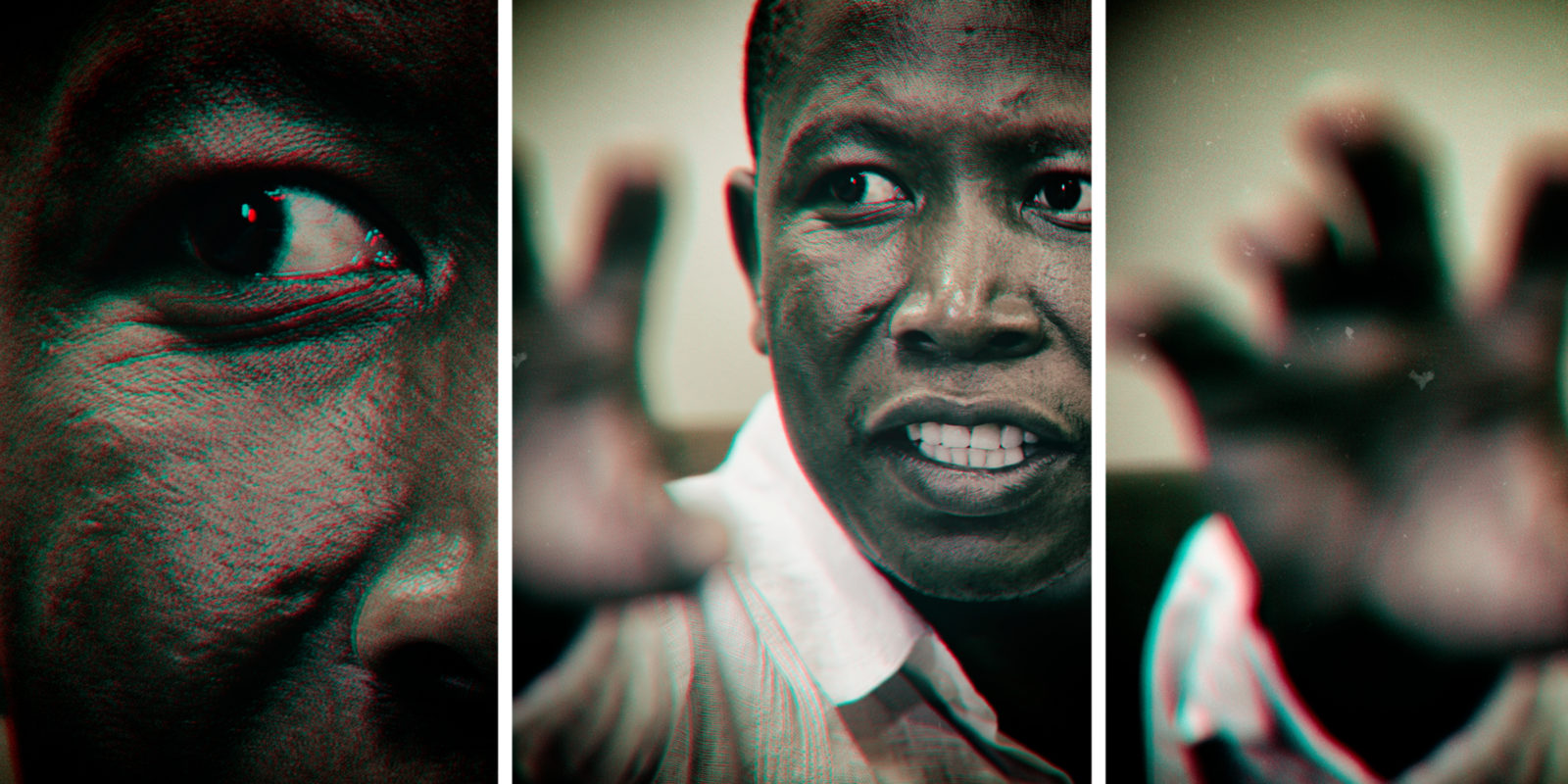 In the past six months, the EFF has emerged as the key merchants of political disinformation campaigns in South Africa as they peddle false information as a weapon in every arena where there is a war to take out State Capture networks.

At both Eskom and Transnet, the epicentres of investigations and a clean-out of the patronage groups which milked them dry, the party has taken up arms, deploying a race narrative that Minister of Public Enterprises Pravin Gordhan is exorcising black executives.

The effectiveness of the EFF campaigns has, in 2018, ushered South Africa into an era of disinformation where social media is weaponised to spread campaigns often built on falsehood.

Bird uses the European Commission’s definition of disinformation as:

“All forms of false, inaccurate, or misleading information designed, presented and promoted to intentionally cause public harm or for profit.”

“Disinformation is generally used to refer to deliberate (often orchestrated) attempts to confuse or manipulate people through delivering dishonest information to them.”

Since June 2018, the EFF has sown four impactful but false narratives into the national news agenda and migrated them from social media disinformation to the top of the mainstream news media’s agenda where they were given serious and prominent airing.

This campaign is now known to have been a protection front for VBS Mutual Bank which funnelled fees to the EFF and to the family of its president Julius Malema and deputy president Floyd Shivambu. The party successfully embedded the idea that a black bank was under attack until the inquiry into the VBS Mutual Bank revealed how R2-billion had been looted from the Limpopo-based community bank.

The party is also floating new disinformation campaigns which are gaining traction. The first is one against the new management of Eskom and which mimics the position of coal interests who are fighting the independent power producers (IPPs) sector which is bringing renewable energy to the national electricity grid. Here, the party is beginning to use social media to spread disinformation about the costs of renewables and linking these to the season of blackouts. Numerous energy experts have discounted this as false and misleading.

The second is a fight against the clean-up at Transnet, notably by joining the campaign against the axing the former CEO Siyabonga Gama.

How does it work? An anatomy of disinformation campaigns

Daily Maverick has worked with researcher Kyle Findlay of the data blog, Superlinear, to track how the EFF engages disinformation campaigns. Findlay has studied how the party creates narratives. He studied a network of 72,277 tweets related to Gordhan between 9 September and 28 November 2018 to show how both the EFF social media network as well as that linked to Andile Mngxitama’s Black Land First movement built a sizeable public narrative against Gordhan.

“What is immediately clear is that there are three main groups (representing 67% of all users in this data) generating most of the discussions around Pravin Gordhan: the EFF, the Black Land First/capture networks and then everyone else (individual journalists, mainstream media and prominent social media accounts).

“The EFF and the BLF/capture networks have a vested interest in discrediting (Gordhan) and are generating a huge amount of conversation around (him),” says Findlay.

What the EFF and, to a lesser extent, the BLF and pro-State Capture communities did is to put the anti-corruption narrative on the defensive. Gordhan’s testimony to the Zondo Commission of Inquiry was drowned out by this campaign.

The hashtags #PravinMustGo and #PravinMustFall trended and this “laid the groundwork for Gordhan’s vilification in the court of public opinion”, says Findlay.

Instead, the story became about the charges which the EFF laid against him and the countercharges the minister laid against the party. In his testimony before the Zondo commission, Gordhan referred to the social media campaign repeatedly. 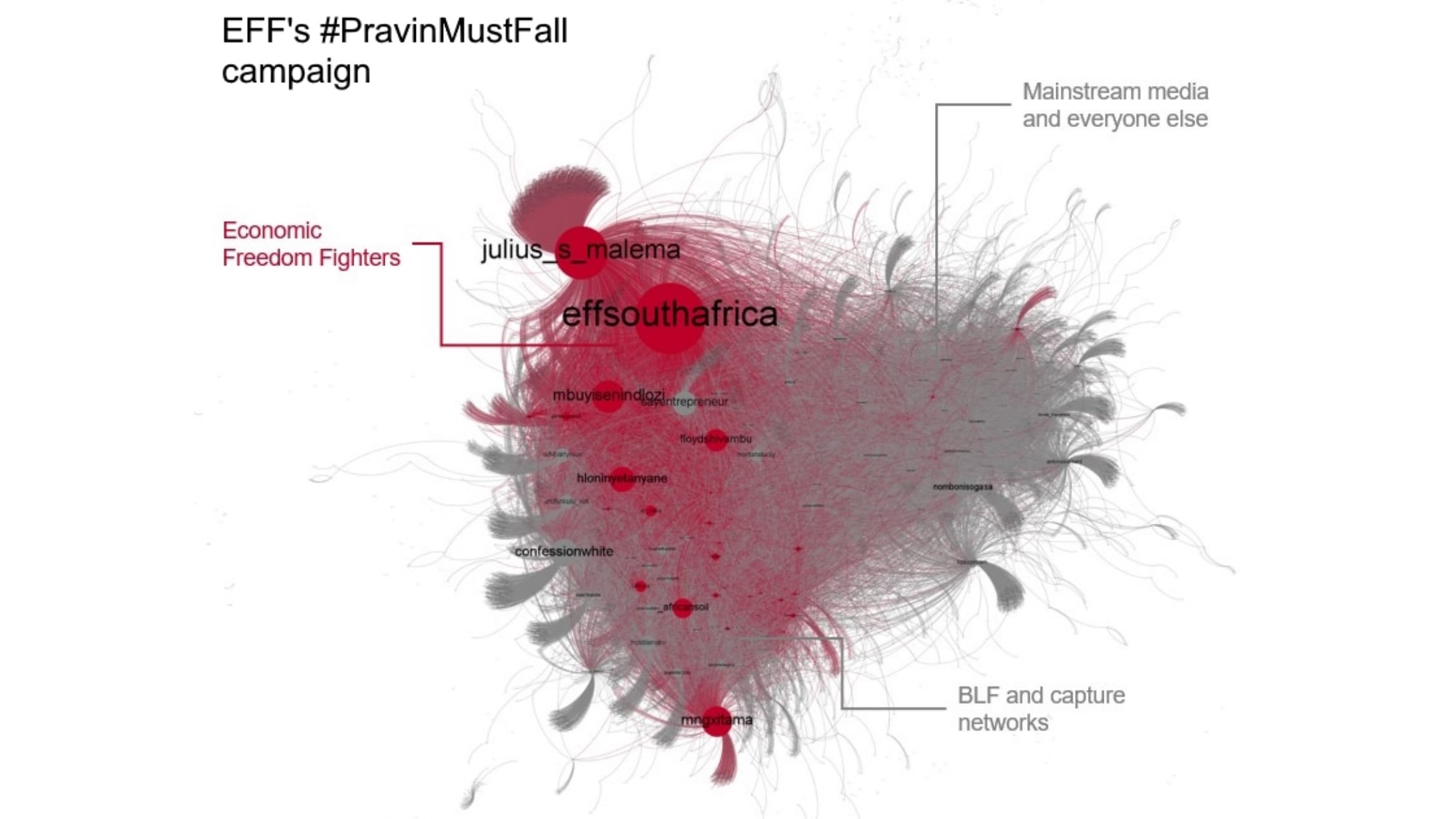 The “Indian Cabal” narrative, which started in June 2018, is also interesting. In this one, you can see how the EFF and its most prominent leaders including Malema, Shivambu and the national spokesperson Mbuyiseni Ndlozi reinforced the idea that the Treasury and parts of the media were run by an “Indian cabal” symbolised by Ismail Momoniat, the Treasury deputy director-general who had been instrumental in securing inquiries into the VBS Mutual Bank’s looting as well as into declining tax administration at SARS under Tom Moyane.

What the image of the social media network below shows, says Findlay, is that the disinformation campaign migrated from social media to mass media and so gained traction.

“By picking up on all narratives and treating them as equally worthy of political debate regardless of provenance, the mainstream media unwittingly gives those narratives social credibility in the eyes of partisan supporters. This arms purveyors of alternative narratives with a counterargument that allows their followers to continue believing what they choose to believe.”

Findlay points out that disinformation campaigns usually have a grain of truth in them: in the case of the “Indian Cabal”, the United Democratic Front in the 1980s had race divisions and the idea of Indian domination was a critique the movement faced. 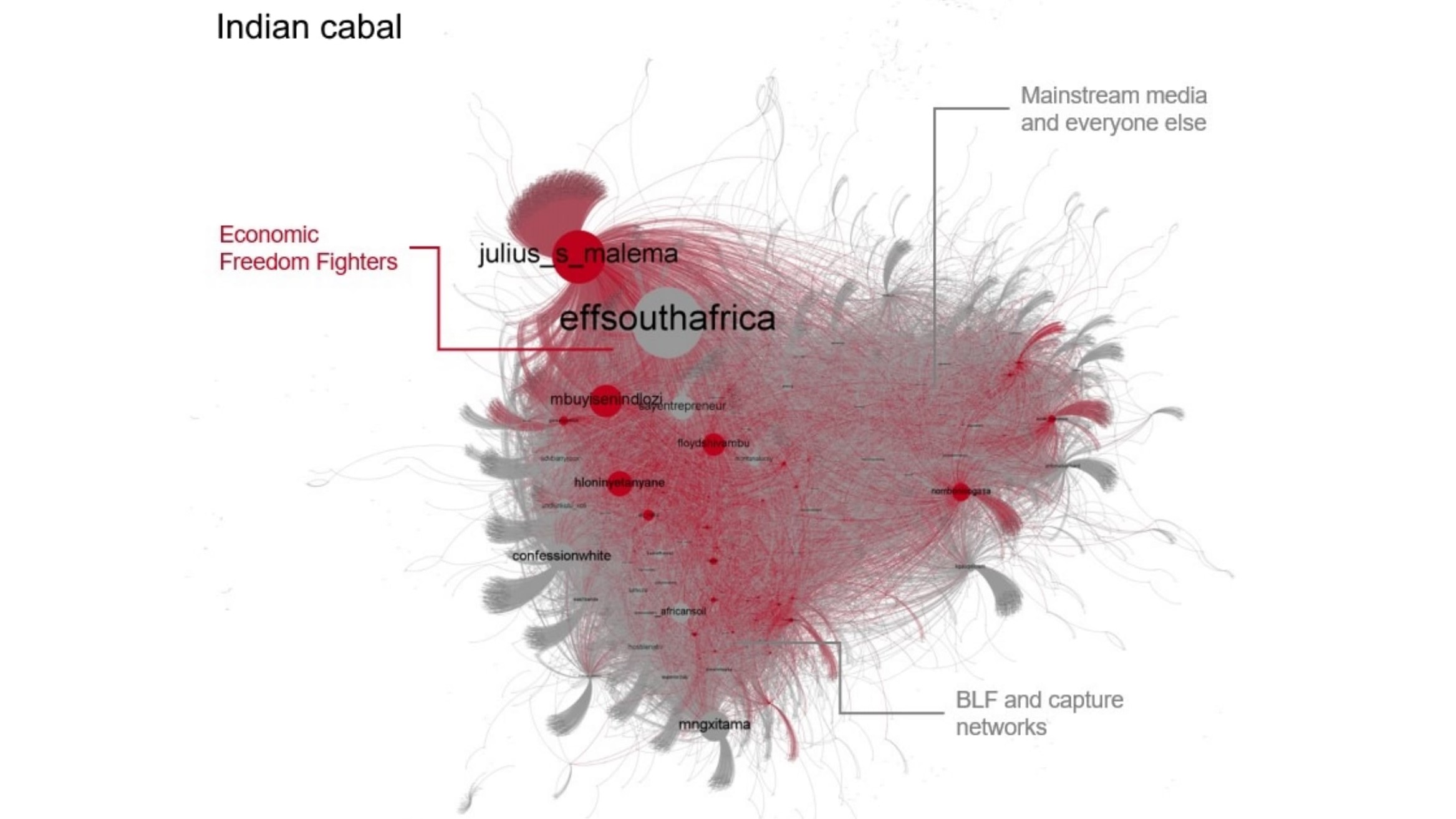 The idea that a rogue unit operated at SARS has been disputed again and again. The Nugent Commission of Inquiry has heard evidence that it was a straw man narrative built to capture SARS and clear out executives who were investigating powerful smuggling and political networks; KPMG has withdrawn and apologised for its investigation which found that a rogue unit existed; the Sunday Times, which ran a series of over 30 articles on the alleged rogue unit, and which gave it prominence in the public eye, has withdrawn and apologised for the entire series.

Yet, in the past three months, the EFF has taken the exact disinformation which led to the original articles in the Sunday Times and repackaged it into a campaign it is running across social media as part of its protection of Moyane. And it is working again. Findlay’s image below shows how the rogue unit narrative is being re-threaded into the public domain, threatening the rebuilding of a disinformation campaign to counter the clean-out at SARS. Findlay points out that the campaign is often refuted in mainstream media. 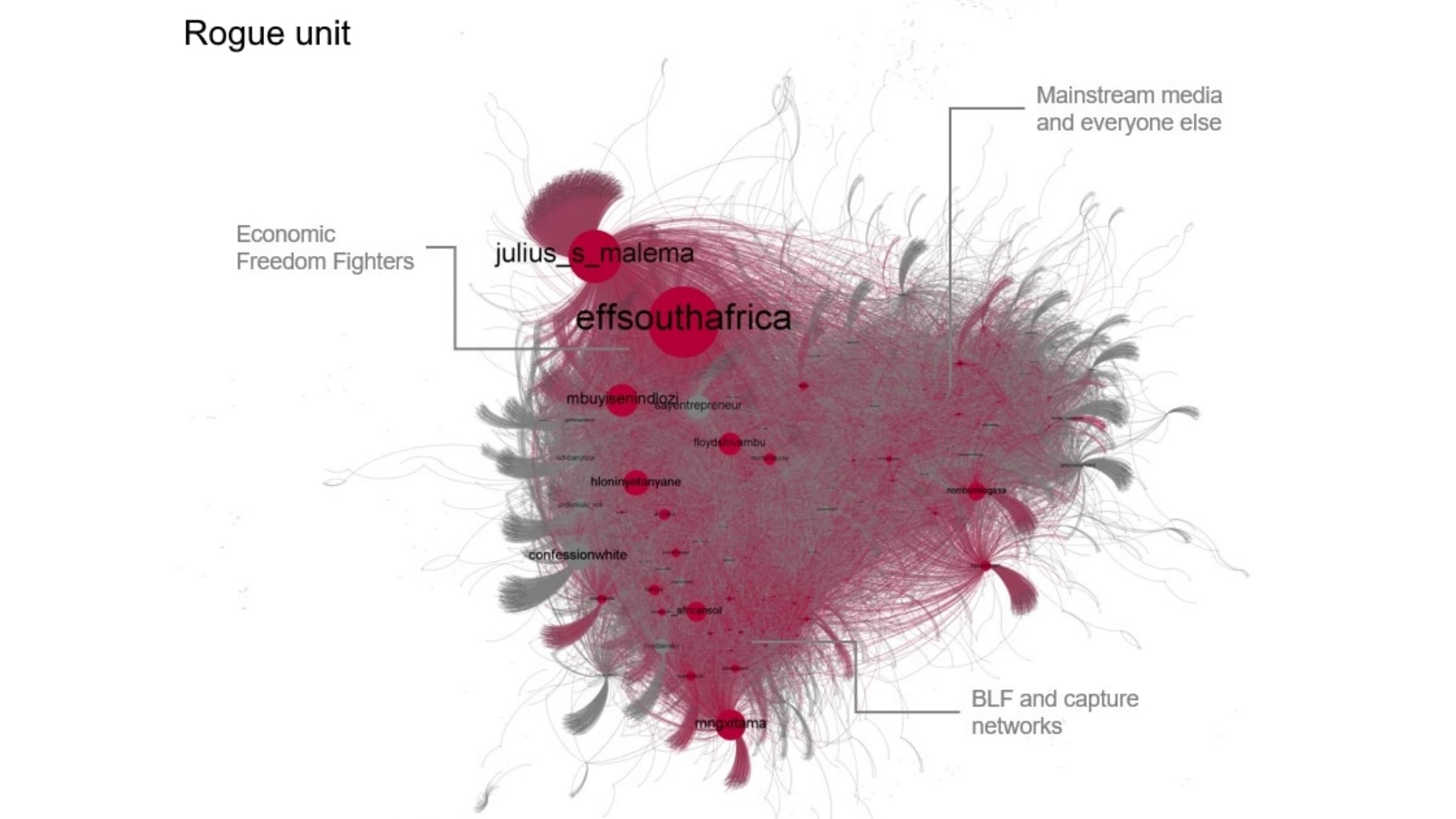 Social media is now the most powerful form of media in South Africa and is often the only source of news, especially for young people.

Disinformation campaigns are easily spread virally on social media and the EFF have shown themselves to be the master merchants of disinformation. DM