Normalisation of SA-Rwanda relations has been suspended after insults to Sisulu, sources say 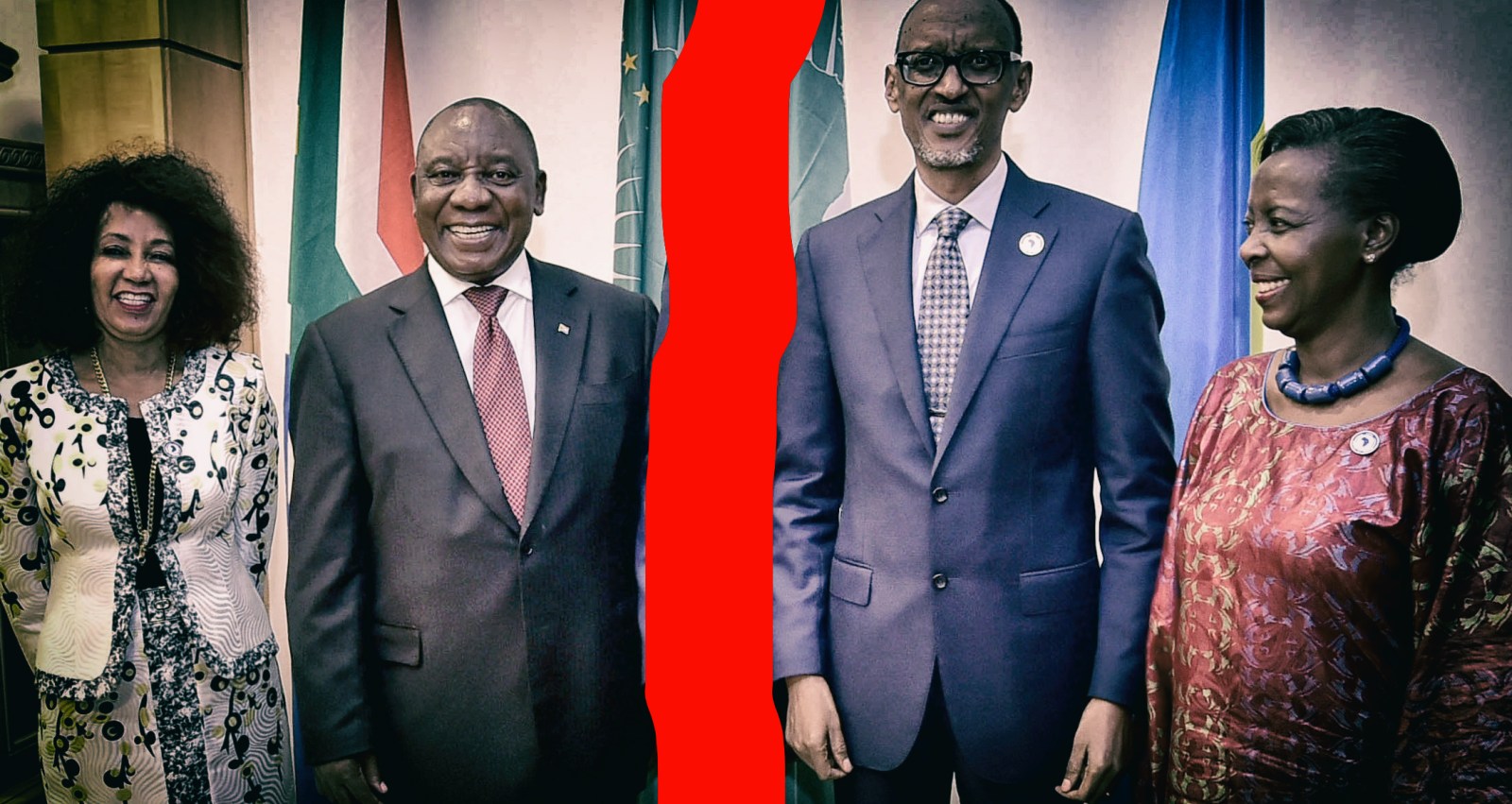 ( Presidents weere accompanyied by their DIRCO and Foreign Affairs Minister) President Cyril Ramaphosa paid a courtesy call on President Paul Kagame at the State house in Kiigali ahead of the 10th Extraordinary Summit of the AU Heads of State and Government 21st March in Kigali, Republic of Rwanda.20/03/2018 Kopano Tlape GCIS

Pretoria has officially protested to Kigali and recalled its envoy from Rwanda for consultations.

The website Rushyashya, which Rwandan exiles say is run by Rwanda’s military intelligence, went as far as calling her a prostitute. The story was quickly deleted from the site. Rwandan deputy foreign minister Olivier Nduhungirehe has also tweeted several messages which Pretoria has found offensive.

Sisulu suspended the normalisation of relations after the “prostitute” insult, according to some government sources. Her spokesperson, Ndibhuwo Mabaya, denied however that the process of normalising relations – ordered in March by both President Cyril Ramaphosa and Rwandan President Paul Kagame – had been suspended.

Mabaya also confirmed that Twala had then been ordered back to Pretoria for consultations with his government about relations with Rwanda.

“That process requires that we must have reviews and assessments. And yes we are not happy with the social media insults from the Deputy Minister and we have expressed that to the Rwandan High Commissioner in South Africa last week. We called him in.

“Our High Commissioner also met with the authorities in Kigali before he came back for consultations. He indicated that we are very unhappy with the tone of the social media posts and that we want them to stop immediately. They are undiplomatic and foreign to our relationship.”

Asked if this all meant that the normalisation of relations had been suspended, as some sources put it, Mabaya said:

”No, not at all, we are busy with it, but we cannot be busy with processes to normalise the relations and on the other side we are also busy insulting each other on social media and other platforms.

“The Minister has started the process to normalise and to consult all stakeholders in Government to make sure we are able to finalise this, and the insults and social media posts do not assist.

“When the High Commissioner Twala met with authorities in Kigali, we were promised that the insults will stop and the Deputy Minister will be talked to. We are unable to work and focus whilst being insulted.”

The spat between the two governments was sparked by Sisulu’s disclosure at a press conference last month that she had met former Rwandan army chief General Faustin Nyamwasa Kayumba in South Africa.

Kayumba fell out with his former close ally Rwandan President Paul Kagame in 2010 and subsequently fled to South Africa. In June that year, he was shot outside his home in Johannesburg but survived. A military court in Kigali tried him in absentia for trying to overthrow the Rwandan government by force and sentenced him to 24 years in jail.

He has since survived at least two more attempts on his life in South Africa. After what is believed to have been the third attempt, in 2014, South Africa expelled three diplomats from the Rwandan embassy in Pretoria and one from the Burundian embassy, all suspected of complicity in the attempts on Kayumba’s life. Rwanda retaliated by expelling six South African diplomats.

Since then, relations have thawed slightly but have not returned to normal. Ramaphosa met Kagame in Kigali in March on the margins of an African Union summit and they agreed to task their foreign ministers with normalising relations.

At her press conference last month, Sisulu said she had met Kayumba because his situation would probably figure in negotiations to normalise relations. Kayumba helped establish an opposition party, the Rwanda National Congress, which operates from South Africa and other countries outside Rwanda.

Although Kigali would like South Africa to return Kayumba to Rwanda to serve his jail term, it is likely to demand at least that Pretoria curb Kayumba’s political activities.

Sisulu said when she met Kayumba she had been “pleasantly surprised” to discover that he was prepared to negotiate a reconciliation with the Rwandan government.

“If any SA official wishes to negotiate w/a convicted criminal hiding in #SouthAfrica and leading a subversive movement operating in our region, he/she is free to do so, on his/her own and for him/herself.

“But he/she should never think about involving #Rwanda into this ‘negotiation.’”

The official Rwandan government Twitter account tweeted Rwandan foreign minister Richard Sezibera as saying “There have been no discussions so far apart from the meeting of two Heads of State. My counterpart and I were tasked to discuss ways of restoring our relations. This has nothing to do with suspected criminals.”

And the official Rwanda Today Twitter account went further, reporting Sezibera as saying that “Rwanda has not had any discussions with South Africa on talks with dissident Kayumba Nyamwasa“.

It continued that Sezibera had said that when the two ministers did meet “they will focus on discussing bilateral ties, not the fate of Nyamwasa & others.”

However, it was the website Rushyashya which most offended Sisulu, according to Pretoria sources. The Website headed its story about the row with the line:

“Kayumba’s prostitute Lindiwe Sisulu is attempting to organize a meeting between him and President Kagame.”

Some sources within the Department of International Relations and Cooperation are saying that’s when Sisulu called off the normalisation process indefinitely. They added that Sisulu had yet to meet Ramaphosa to explain to him why her efforts to carry out his instructions had not made progress.

The sources were unclear whether Ramaphosa would sympathise with her and agree she had good cause to suspend the normalisation of relations in the circumstances – or would insist she swallow her pride and patch up the quarrel in the broader interests of better relations between the two nations. DM