‘I have not done anything wrong, I have not acted as a political influencer’ 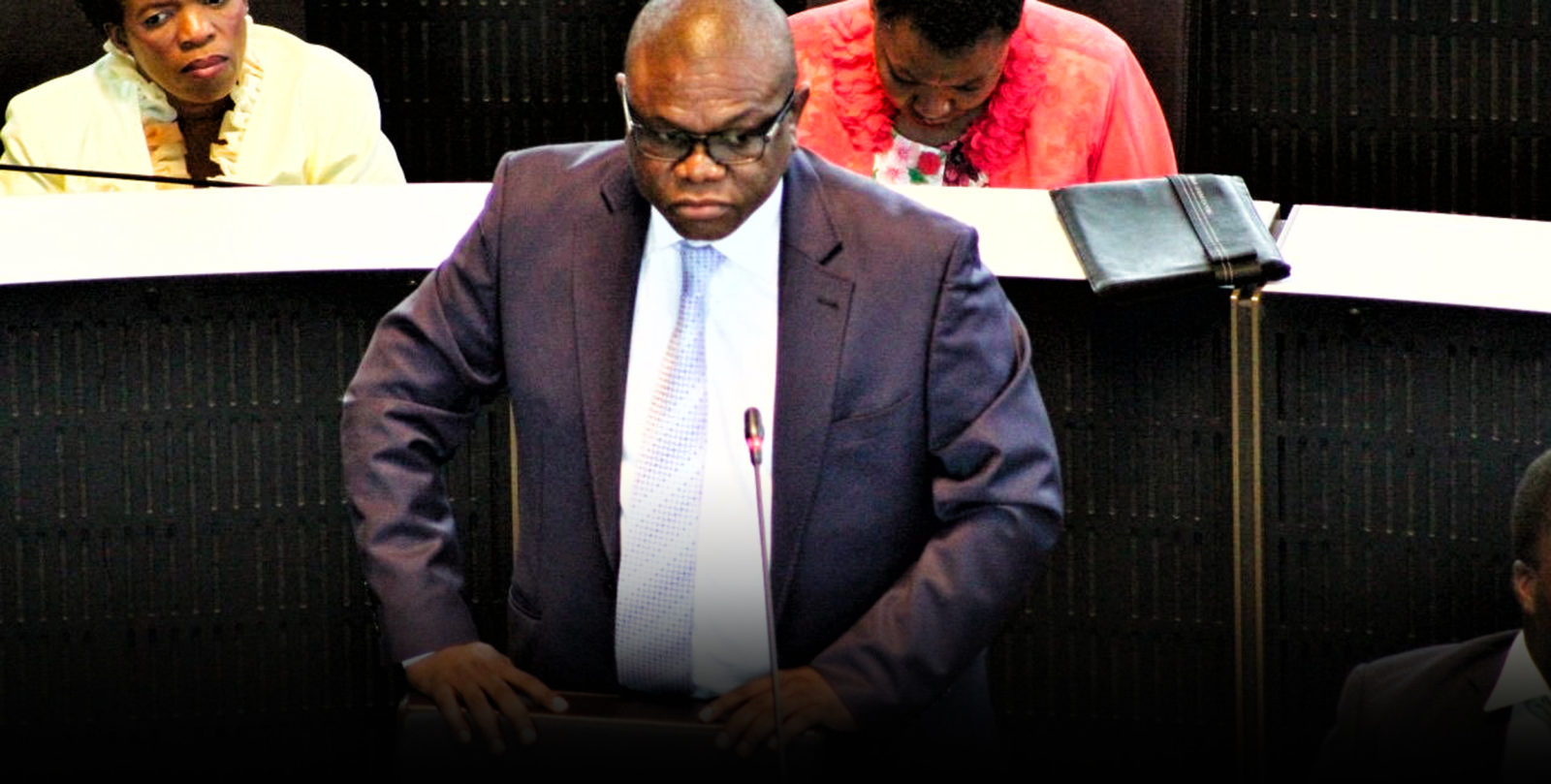 In as far as obtaining a cheat sheet, I had never come across such a document until amaBhungane asked me about it, and I don’t recall ever receiving such from anybody. I do not even know what a cheat sheet is.

This is a right of reply to the following article: Geoff Makhubo, Jo’burg ANC leader, scored millions from City contract

It’s an unfortunate place we find ourselves in South Africa, where one is perceived guilty until proven otherwise in the court of public opinion.

This is often with dire consequences for those who are tried and convicted in the forum where the normal rules of hearing the other side of the story and interrogating the versions of the accusers — if they are known — is not available to the accused.

This is often done on basis of innuendo, indifference to context and purely on allegations by aggrieved parties, who often feel that they alone are entitled to certain outcomes.

It is further concerning when what is supposed to be a respectable media organisation picks and chooses which responses to publish and how to frame these.

This is certainly the case with amaBhungane’s story with regards to my alleged role as a political influencer.

Prior to me being elected a councillor, taking up the role of the Member of the Mayoral Committee for Finance at the City of Johannesburg, I was an accounting and finance professional. I hold a commerce degree obtained from the University of Witwatersrand.

I then served Articles of Clerkship with one of the then Big Eight (now Big Five) auditing firms. At the dawn of democracy, I worked for an SOE in internal audit and then worked in rural development specialising in financial and economic models. At the time one was confronted with harsh realities of rural poverty and had to work with others to better the lives of rural communities, largely women, since the advent of the migrant labour system was still prevalent. This work was in some areas of the Eastern Cape and the then Northern Transvaal.

In September 1998 went into business when I joined my family in a newly registered firm, Molelwane Consulting, which offered accounting, tax consulting, advisory and financial services.

Over the years the business managed to build a skills base, ranging from accounting, finance and tax to business process re-engineering, consulting and ICT. We achieved this through partnerships with other, larger finance, auditing, consulting and ICT firms. During this time, we had a wide range of clients in the non-government, public and private sector — this included companies that operated in financial services, asset management, pension administration, energy, petroleum and ICT.

Thus, getting into a partnership with Regiments Capital in 2005 was nothing out of the ordinary, as this had always been our model, to work on our own or in partnerships. This relationship with Regiments was an agreement to work together and explore business opportunities in mutual areas of interest. A request for proposal for the City of Johannesburg’s sinking fund was one such opportunity to realise the objectives we had set out.

So, when the tender was advertised in 2005, Regiments and Molelwane agreed to jointly respond. Regiments submitted the bid as we agreed to enter into a sub-contracting agreement rather than be joint principal contractors. This we thought, as Molelwane, was the best way to commercially contract, given the risk-based fee structure. During this time Molelwane had other clients as well and continued providing quality value-adding services to all our clients. In 2002 I, with partners, started a financial software and business consulting company. From there on I shared my time between this company and Molelwane.

I have been an activist since my student days. I continued to be a member and leader of the ANC Youth League and member leader of the ANC. I have been assigned various tasks by the ANC including leading local elections structures, participating in fund-raising activities, and so on. As members and leaders, we are expected to participate in fund-raising efforts so that the organisation can run its programmes successfully.

Where possible individual members contribute their own funds into organisational affairs. It, therefore, puzzles me when there is a suggestion that there is something untoward about this as it’s not a new phenomenon. All political parties around the world depend on donations to run their affairs and yes, these donations largely come from the private sector. Again, to assume that this type of action is automatically corrupt is misleading.

Regiments Capital was awarded the tender to set up, design and manage a sinking fund in 2005, with implementation beginning in 2006 — this is when our contract with them would have kicked in, which was a five-year contract to end in January 2011. In 2010 the City began a process to find a service provider to manage the sinking, as the Regiments term was due to end in 2011. Regiments decided to respond to the bid for the second sinking fund contract in 2010. However, Molelwane Consulting took a decision not to be part of this bid or participate in the second sinking fund.

I understand that the adjudication process was not completed, because as mentioned in the article, the MEC of Co-operative Governance put a moratorium on all big tenders. That meant that the first sinking fund contract was extended on the same terms and conditions for a period until some months after elections. The Molelwane contract with Regiments continued on the same terms as well.

The supply chain process for the second sinking fund was restarted in late 2011, but before the award could be made in early 2012, one of the bidders, Colourfields, interdicted the City and stopped the award from being made by going to court to challenge the outcome of the evaluation process.

The litigation by Colourfields went on for just less than two years, which meant that the existing contract with Regiments from 2005 continued on a month-to-month basis, while these legal issues were being resolved. This meant that Molelwane would continue to work with Regiments, as our agreement and arrangement had been in place since inception. When they bid for the new contract Molelwane did not bid nor participate. The extension was necessitated by the need to keep the sinking fund operative and not leave a gap. Due to litigation, a new service provider could not be appointed.

To insist that there was a conflict of interest is again misleading, because when Regiments won the bid in 2005, I was a full-time employee and CEO of Molelwane Consulting and I was an ordinary ANC member participating in the branch and zone. I contested for and was elected ANC Joburg Region Treasurer in 2008 while I was full-time at Molelwane Consulting, and three years after Regiments had won their first contract. During the time I was Regional Treasurer of ANC I did not influence anyone in the City in any way.

In 2011, before local government elections, I accepted the nomination from branches of the ANC to serve as a city councillor. After the elections, I was sworn in as a councillor and was subsequently appointed as Member of the Mayoral Committee for Finance. I took office at the beginning of June 2011 and resigned as CEO of Molelwane Consulting and all my executive responsibilities.

This was done to focus on the mammoth task assigned to me and to comply with the law that as a full-time councillor I may not hold any other employment. I declared all my business interests when I joined in line with the commitment to the ANC and to the mayor to resign my directorships and wind up my interests; I proceeded to resign from all companies I was involved in November 2011 and began a process of unwinding all my business interests, including those in Molelwane Consulting.

When the second round of declarations in the register of interests came about in the City I was made aware that not all resignations and amendments were effected at CIPRO/CIPC. I then took a decision to declare all my companies once more. This continued into subsequent years as I took a view to err on the side of caution. I have seen, in legislatures and Parliament, members get into trouble with ethics committees by not declaring their companies, thinking that they have resigned, or the company is dormant, or it’s been deregistered while CIPRO had not updated

An unwinding of a business meant finalising financials, dealing with creditors, valuing the business and appointing specialists to deal with all contractual obligations. The decision was to complete all running contracts, settle all liabilities and finally close down the operations of the company. All this was carried out in my absence. I, however, am aware that Molelwane continued with normal business operations and serviced its contracts until dissolution. I do not consider myself conflicted in any way during that time of transition as nothing I did favoured Molelwane or any of its associates.

To suggest that I had an influence on the awarding of any contract in the City is pure speculation and nothing could be further from the truth.

To also suggest that while a member of the mayoral committee I pushed for Regiments to win the second sinking contract, which is still running, is again an allegation with no basis and made by unnamed sources who evidently either felt entitled to the contract, or sought to score cheap political points at the expense of the truth.

It is also worth noting that the amaBhungane story itself says that the Browde and subsequent Deloitte reports found that the City’s contract with Regiment “appears to have been above board”.

In as far as obtaining a cheat sheet, I had never come across such a document until amaBhungane asked me about it, and I don’t recall ever receiving such from anybody. I do not even know what a cheat sheet is.

There are also questions around an email in which I would have asked about urgent payments — again there is nothing wrong in credit control as I was managing cash flow by asking for payments legally due to Molelwane.

In closing, I would like to emphasise that I have not done anything wrong, I have not acted as a political influencer, neither have I influenced anyone to unduly favour any business. I have always acted ethically when conducting business and anyone who thinks to the contrary, let them go to the authorities. When I joined the City I took steps to resign my directorships and unwind the business.

In the interim, I reserve my rights to engage with lawful and regulatory bodies including, but not limited to the press ombudsman, to ensure that there is no further unfair and malicious maligning of my person and reputation.

I have asked the Public Protector in writing to investigate all allegations made against me by amaBhungane. DM

Geoff Makhubo is chair of the ANC’s Johannesburg region.