Unwrapping the security blanket of incumbency 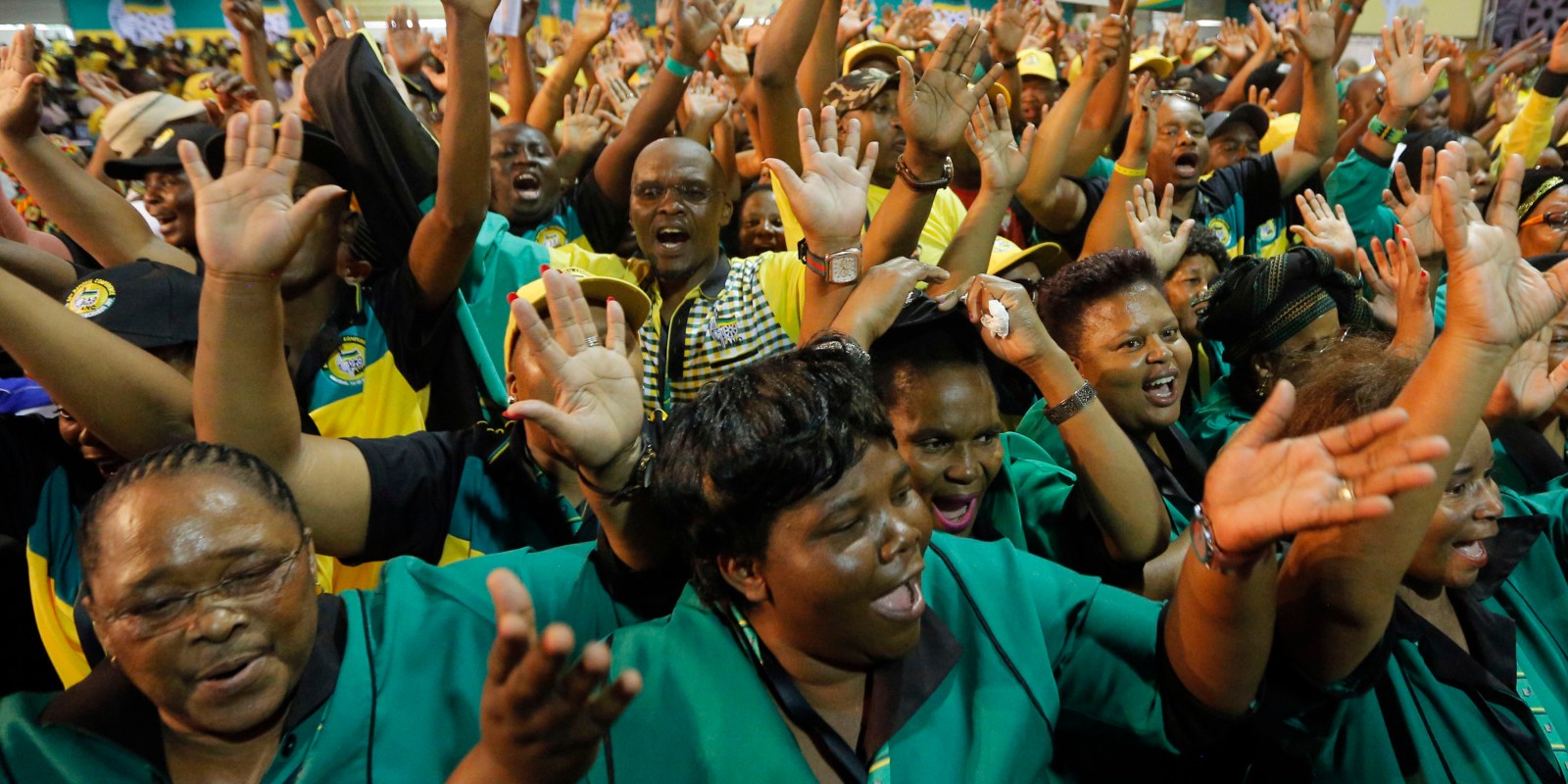 Incumbents generally have quite distinct privileges during elections. The most important among these are recognition, access to campaign finance, resources of the state used (indirectly) to strengthen visibility and voice, and experience or institutional memory. Together these amount to a structural advantage that incumbents have over challengers.

Going into the 2019 election, the ANC has the security blanket of incumbency. Actually, that’s not quite correct. The ANC should have the benefit of incumbency. However, given the rapid decline of the trust in the state and of governance, increasing evidence of maladministration, corruption, incompetence and willful destruction of public entities since 2009, the ANC may turn out to be its own worst enemy in the upcoming election.

For most of the democratic era, the ANC elided the difference between the party and the state, and tied the destiny of the country to that of the liberation movement. Most recently, former president Jacob Zuma insisted that the ANC had “fought for” the country and therefore everyone had to vote for the movement in 2019.

“Everybody must vote for the ANC,” he said, or the country would be “taken away”. What we have, then, are firm links between the ANC, the state, and the country. If the ANC fails, so will the country. Here we approach the ANC’s biggest problem in the next election, notwithstanding its incumbency.

Let us discuss some general issues around the power and advantage of incumbency.

Incumbency as a safety blanket

Incumbents generally have quite distinct privileges during elections. The most important among these are recognition, access to campaign finance, resources of the state used (indirectly) to strengthen visibility and voice, and experience or institutional memory. Together, these amount to a structural advantage that incumbents have over challengers. The numbers provide some support. Evidence from the United States shows that re-election of incumbents can be as high as 98% and rarely falls below 90%.

One of the greatest advantages incumbents have is ready access to information about voters and district voting patterns. This often opens up opportunities for “vote buying” — by any of a range of inducements. Vote-buying is especially pervasive in a decentralised political environment, where electoral mobilisation is driven by pre-election service delivery.

These patterns of vote-buying are evident across the world, where otherwise well-intentioned politicians — who have to rely on weak bureaucracies or a culture of under-performance in service delivery — may readily intervene with governance interventions to sway elections.

This is a perverse type of “clientelism” — the provision of targeted benefits from state resources in exchange for political support. In some cases, notably in India, clientelism is given effect through identity-based political networks. What this means is that a national or provincial leader may identify “their own” people as the first base of distributing largesse for electoral support. Incumbency provides, therefore, a kind of security blanket.

The ANC as an incumbent, and the cost of ruling

Incumbency can also be a burden. In a liberal capitalist democracy — especially in the highly developed countries of the European world — the electorate can tire easily of a leader after they have been in office for more than one or two terms. We should probably not extrapolate this to Africa willy-nilly. In Ethiopia, Haile Selassie was in power for 44 years, Muammar Gaddafi ruled Libya for nearly 42 years until his death in 2011 and Gabon’s Omar Bongo Ondimba ruled for more than 42 years until his death in 2009.

South Africa is different from most African countries in that it has had five successful, fairly free elections, with the ANC in power with a democratic mandate for more than two decades. This extended period, where the South African president was always also the leader of the ruling party, has come at a high price. Given the nexus between the state, the party and the country — described above — the public service and state-owned enterprises and state agencies were staffed mainly by the ruling party.

Under these conditions, when a member of the public encounters a public official who is unprofessional or incompetent, there may be a resentment towards the ruling party. The public, as the electorate, will often, not incorrectly, see no difference between civil servants and the ruling party, which becomes an incumbency disadvantage. It does not help that over the past 10 years, in particular, the almost authoritarian Zuma administration preferred loyal bureaucrats over capable ones, in the way that, say, Sukarno built a loyal bureaucracy around him that controlled the Indonesian state, and policed access to resources. In this way, the security blanket of incumbency becomes frayed at the edges and thin in the middle.

The problem for the ANC as the incumbent is that the evidence of maladministration, incompetence, graft and non-performance is overwhelming, and continues to pile up like the mountains of mail in the storage facilities of the Post Office — waiting to be delivered. As explained in this space previously, perceptions matter during elections.

Let us consider some of the factors that add to the cost of incumbency.

Now, without directly blaming the incumbent — that is the easy part — what is it that feeds public perception and adds to the cost of incumbency? Let us look at four high-profile cases of maladministration. There are many more cases than those discussed, below.

At the moment of writing, the country is experiencing electricity shutdowns, load shedding. There is a different explanation for this load shedding every week, but this is nought for the comfort of users. The state-party nexus effectively controls Eskom, the electricity generator and supplier.

The country’s national carrier, South African Airways, also owned and managed by the state-party nexus is in debt and “technically bankrupt” with an estimated R15-billion in debt.

The public broadcaster, the SABC, has been in desperate decline for most of the past decade. The SABC is running out of money. By one account it has incurred R570-million in irregular expenditure during the 2017-18 financial year, bringing its total irregular expenditure to R4.9-billion. In October 2018 Auditor-General Kimi Makwetu reported that the SABC incurred a loss of R622-million during the year ending March 31, 2018.

The Passenger Rail Association of South Africa (Prasa) has become a poster-child for maladministration. While the agency continues to limp along, the AG reported that in 2016 Prasa incurred R4.1-billion in irregular expenditure, a further R9.8-billion relating to previous years, and advance payments of R1.9-billion for locomotives — the contracts for which, Makwetu also revealed, had been awarded to companies that did not meet contractual requirements — and that there was evidence of unauthorised credit card use.

The ruling party is burdened further by high-profile members who have engaged in rather dubious activities, who have been accused, and some prosecuted, for criminal offences. Others have publicly displayed crass signs of opulence, avarice and gross negligence (Bathabile Dlamini is the outstanding example of this) and dereliction of duty. Many have been associated with State Capture, and the hollowing out of the state.

The Gupta family involvement in many questionable dealings has been widely reported, and the Judicial Commission of Inquiry into Allegations of State Capture, Corruption and Fraud in the Public Sector including Organs of State (the Zondo Commission) almost daily uncovers misdeeds on the part of some government official, politician or “connected” private individual.

These matters — of maladministration, corruption, abuse of funds, the virtual collapse of state-owned enterprises and the odiousness of party members — all place a high cost on the incumbency of the ANC, on its leaders, and on President Cyril Ramaphosa. For them, the traditional security blanket of incumbency is starting to unravel. In this case, the cost of incumbency is higher than the benefits.

The benefits, in the case of the ANC, are experience, recognition, access to finance, state resources such as information on voters and a renewed impetus to clean up the rot of the past decade. Ramaphosa is leading this clean-up. There are also exceptional people across the public service, and in institutions such as the Reserve Bank. The problem for all these people is the perception that the incumbent (the ANC) carries a heavy cost burden.

What we may get, then, is a typical anti-incumbency vote, never mind what the evidence (from the US) suggests. In India, the largest democracy in the world, evidence from the period 1977 to 2005 showed increased anti-incumbency voting over the past three decades.

The Indian example is telling. India too will go to the polls in 2019. The governing Bharatiya Janata Party (BJP), which dominates much of the country, is finding that incumbency is a liability. The conditions that gave the BJP a historic mandate in 2014, when they swept the Indian National Congress (INC) from office, will probably not work in their favour in 2019. For the BJP, incumbency is considered to be more of a curse than a blessing.

The ANC seems lost without the security blanket of incumbency. Its Indian counterpart headed government for 49 years — and was swept from office in 2014. DM