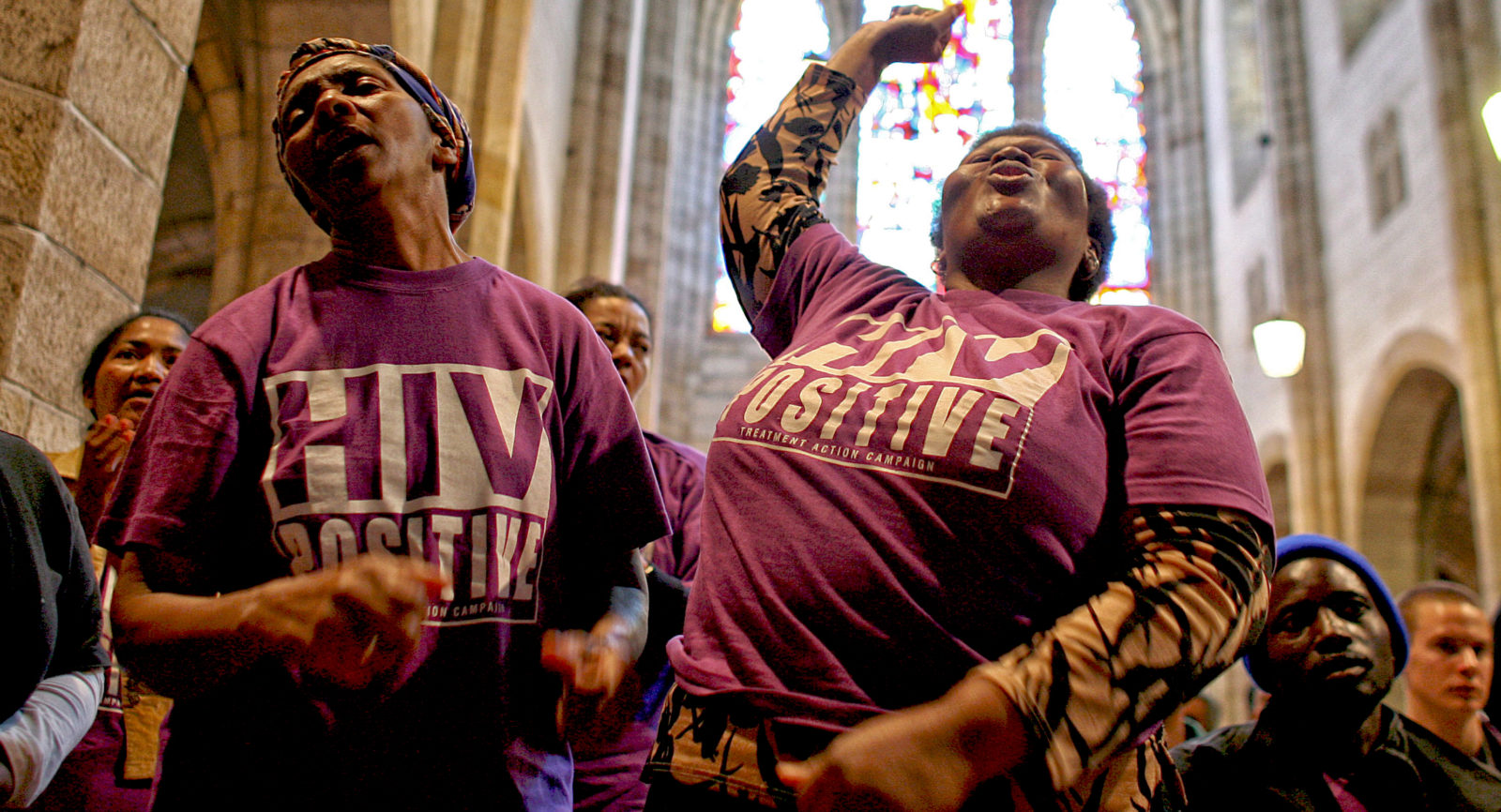 The Treatment Action Campaign remains as relevant in 2018 as it was 20 years ago, when it was formed to become a thorn in government’s side and a symbol of hope for people dying from HIV/Aids.

The dying had started. Traffic jams at cemeteries would become the weekend norm, likewise daily newspaper obituaries, column upon column of people felled in their prime. This was HIV/Aids — but no one was saying so.

Ten people on the steps of St George’s Cathedral on 10 December 1998 however, were shouting loudly about HIV/Aids. They were going to show their faces and make demands for the right of everyone to receive treatment.

This was the birth of the Treatment Action Campaign (TAC) that on Monday marks its 20th anniversary. It’s the story of how a T-shirt with the slogan “HIV-positive” came to be a thorn in government’s side, a symbol of hope for people dying from HIV/Aids and an icon of activism still needed in an age of democracy.

TAC co-founder Zackie Achmat had spoken at the funeral of Aids activist Simon Nkoli days before the protest on 30 November 1998. He vowed to fight for access to treatment, knowing from his own experience that if the right medicines were affordable and accessible people would not be dying.

Four days after that protest action, activist Gugu Dlamini, who had disclosed her HIV status publicly, speaking on radio in Zulu on World Aids Day, was beaten to death in KwaMashu.

“Those two events created the anger and passion that would become the momentum for organising and mobilising,” says co-founder Mark Heywood. As one more person put on an “HIV-positive” T-shirt and stood to challenge HIV stigma, more people joined. Recruitment and empowerment came through a strong treatment literacy programme rooted in spreading the word from neighbour to neighbour, patient to patient. This patient-driven, community activism would become a hallmark of the movement.

It meant that people could see the power and the purpose in marching to the opening of Parliament each year, taking part in in civil disobedience campaigns and joining rallies for AZT for pregnant women and pushing big pharmaceutical companies to make drugs available.

Heywood remembers the many milestones, like the day he got the call from Dr Nono Simelala, who headed the government’s HIV programme at the time.

“I was driving around Fourways when I got the call and she said it wasn’t news yet, but Cabinet had in principle agreed to provide ARVs. She was weeping and I nearly crashed my car,” he remembers.

There have been hard-won victories, also challenges, and challenges that still lie ahead for a TAC that must stay relevant and be adaptive, says Heywood.

“Sometimes we were the lone voice and we had to be unapologetic when we disagreed with unions, health ministers or other campaign groups — and it seems we are in that same position again,” says Heywood.

TAC tells the bad news story — be it from taking on government over intellectual property rights and patent laws, medical aids’ exclusionary policies, pharmaceutical companies’ high prices, failings in the NHI, calling for #Zuma Must Fall or holding to account those who signed off to allow the Life Esidimeni tragedy to play out.

For national chairperson Sibongile Tshabalala the next focus for TAC is building layers of strong leadership, especially of women leaders, from branches, through to provincial and national structures.

Tshabalala says to be a TAC activist is choosing to stand and to fight even when there are families at home that need to be taken care of, even if you’re a woman in a man’s world and you’re a single parent. She joined the organisation in 2009. Having being diagnosed with HIV in 2000 and only receiving treatment in 2006, she had a lot of questions and not many answers. A doctor connected her with her local Vosloorus branch of TAC activists.

“I got all my questions answered through the treatment literacy programme and I understood my rights and I could live positively,” she says. That year she became branch co-ordinator and rose through the ranks to be national chairperson.

Tshabalala today sees another generation of people living with HIV/Aids don the HIV-positive T-shirt for the first time and find answers, comfort and strength that they do belong and they have a right to demand better treatment.

The T-shirt is a kind of armour, says TAC secretary-general Anele Yawa.

“When I wear that T-shirt I am a soldier going into military combat to fight cadre deployment, political patronage and fighting for the struggle of the poor,” says Yawa.

He joins 8,000 paid members and thousands of others in 253 branches in seven provinces. Yawa recognises that the TAC’s strength is that it is founded on the principles of equality, humanity and serving the most vulnerable. It’s also apolitical, but he says they will take on every relevant political fight — no excuses.

“The TAC will live on forever — even when we are gone, because we have come from a long journey but there are still struggles that we need to fight,” Yawa says.

Yawa lost his brother Andile Cushe to HIV/Aids in 2004. HIV/Aids still claims lives today, but inequality, poverty, even apathy and power gone rogue also claim their indirect casualties. It’s what Yawa says gives him reason to keep up the fight.

Dr Mandisa Mbali, from the Department of Historical Studies at UCT, has researched and written widely about the history of activism and of the TAC. Mbali says TAC power has been to be able to bring people along to fights that have transcended an initial agenda of fighting for HIV/Aids treatment for all.

She says it is from an effective treatment literacy that they have been able to add value, providing information and knowledge especially in a time of Aids denialism. Its legitimacy comes from a decentralised organisational structure and leaning on an anti-apartheid lineage.

Added to this Mbali says it’s been able to connect grassroots-level activism with the expertise of lawyers and doctors and to access the courts on a range of justice issues.

“The TAC successfully used Aids activism to catalyse activism on issues from cancer treatment to TB and to challenging the need for wider consultation on the NHI.

“The TAC has also shown that it can relate to a cross-section of society. The challenge now is for people to support HIV/Aids activism, not as something that they can afford to have fatigue over, or to falsely believe that the sector is well funded or too political to get behind,” she says.

For Sharon Ekambaram, who was one of the original leaders of the movement, it’s why the TAC is in her blood, a place that is her home, she says.

Ekambaram knows this to be true for thousands of others, women activists especially, whose lives have been transformed by the TAC, but in turn, and against enormous odds, have become part of an ecosystem of activists and leaders who have advanced an organisation that has become a force both in South Africa and globally.

Ekambaram doesn’t take lightly that decent health care is still denied to millions who rely on a dysfunctional public health service — it’s why the TAC must survive and thrive.

“Today I am lucky to be a mother of two beautiful boys, Ciaran and Aidan Heywood. I am lucky because I can say categorically that they were born alive only because we managed to get jobs that contributed to private medical aid. This cannot be said for more than 40 million people who do not have the privilege of that choice,” she says.

She knows the DNA of the TAC, knows its evolution, its strengths and its vulnerabilities. With its imperfections, also its unique muscle, she says it’s the best chance to heal fractures in society, to stand as a beacon for civil society organisations and to face head on the multiple challenges facing South Africans today.

“We are in an era of toxic opportunism led by political parties who are ‘othering’ at every level,” says Ekambaram.

The TAC is an antidote, she believes, and she’s not alone. Twenty years of the TAC is one part of the journey for thousands of people, and they’re still standing up to be counted. DM