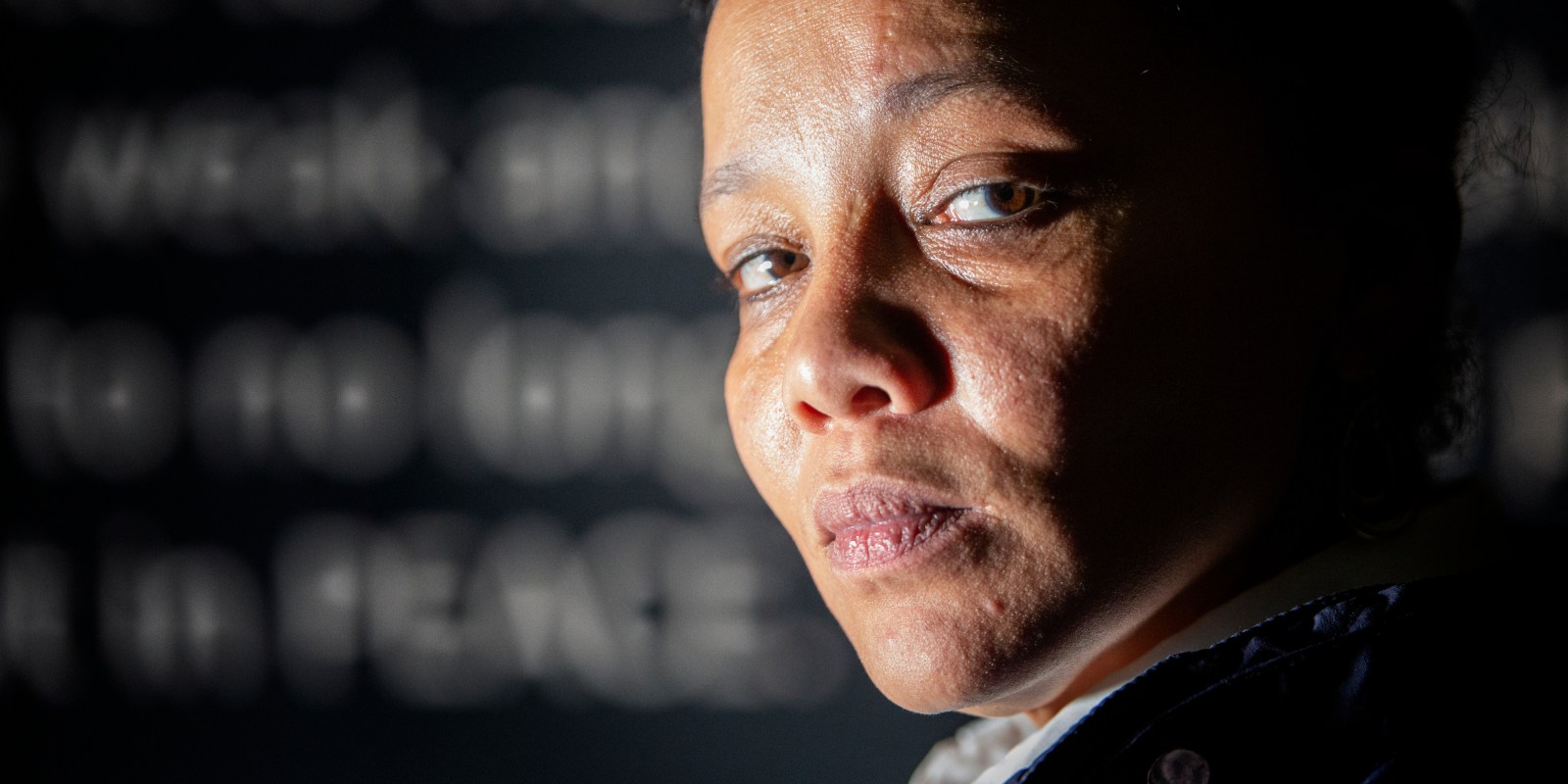 Annelize Kotze, the curator for the exhibition, Interesting Times, at the Castle in Cape Town, 5 December 2018. Photo: Leila Dougan

History has not been kind to museums since they were built on exploiting cultures and objectifying the other. As a curator and woman of colour, Annelize Kotze is at the fore of attempting to change that image and ‘Inter-RESTING Times’ represents that attempt at transformation.

The room is draped in dark curtains, and the boxes are open a sliver, arranged to follow the curve of the room. The boxes are part of an exhibition that was inspired by the repatriation of the remains of Sarah Baartman – of whom renowned poet Diana Ferrus wrote in 1998, “I’ve come to take you home – home, remember the veld?”

Annelize Kotze, the curator of Inter-RESTING Times, which is on display at the Cape of Good Hope Castle as part of the Iziko museum, says that for her, the significance of the exhibition was a personal journey.
According to Kotze, Inter-RESTING Times came about due to growing awareness among the public that museums house human remains obtained under dubious circumstances. Iziko’s Archaeology collection records cases of South African remains which were stolen and taken overseas. It is this information which provides the basis for the Inter-RESTING Times exhibition.

The exhibition consists of empty boxes, representing the storage places for the remains of indigenous South Africans kept in museums abroad or pored over by foreign researchers.

Unlike Sarah Baartman, the women and children commemorated by the exhibition do not have names. They are simply numbers, assigned for research purposes, forever unnamed.

The process of regaining personhood for the remains of South Africans kept in foreign museums starts with being “de-accessioned”, which means permission has been obtained for the remains to be taken out of the collection.

“Once you are de-accessioned it means no one can come and study you, because now is the time for the remains to be returned home,” says Kotze.

Dr Wendy Black, curator of pre-colonial archaeology at Iziko, explains that records for the purpose of repatriation in possession of museums are not always comprehensive.

“Unfortunately, many of the records held by a number of institutions are insufficient for repatriation purposes. At Iziko Museums of South Africa, records of remains are vague and provide little information on provenance, locality or cultural association. When possible, research continues to uncover further information that may assist in repatriation efforts but due to staff and resource scarcity, this process is very slow,” says Black.

Kotze sees it as her duty as a woman of colour to ensure that women like Baartman are laid to rest and that the process of their burial is done thoroughly and with dignity.

Although not part of the exhibition, another well-known case of repatriated remains is that of Klaas and Trooi Pienaar. The remains of the Pienaar couple were taken from the Northern Cape to Austria in 1909 and studied by Dr Rudolph Poch, often referred to as the father of the Institute for Anthropology and Ethnography at the University of Vienna.

In 2012, then-Minister of Arts and Culture Paul Mashatile said of the arrival home of the remains of the Pienaars:

“We saw the removal of our people, taken to far-away lands for research purposes as part of colonial oppression – it is part of how our people were disrespected. We have triumphed over that evil.”

These repatriation efforts are part of the government’s attempts at restoring dignity to victims of colonialism and racism.

The Inter-RESTING Times exhibition is especially relevant during the 16 Days of Activism against Gender-Based Violence, and in light of a recent report commissioned by French president Emmanuel Macron and conducted by French art historian Bénédicte Savoy and Senegalese writer and economist Felwine Sarr. Savoy and Sarr determined that African artefacts belong to Africa.

“I feel that this is a positive step in the repatriation direction. For too long have European (and other) countries claimed dominance and ownership over African treasures with little regard for the original custodians of such objects, culture and sacred spirituality,” says Iziko’s Black.

It took eight years for the remains of Sarah Baartman to be repatriated and for her to be buried on 9 August 2002 in Hankey in the Eastern Cape.

French legislation has long prevented African countries making demands for the repatriation of remains and other objects taken during colonialism. As President Macron’s recent gestures suggest, however, there are indications that the approach of French authorities is shifting in this regard.

France is not the only offender: Kotze explains that there are many kinds of human remains in museums across the world. She could only work on the collection with permission from the collections manager, curator, the human remains committee and the advisory board.

“There are still artefacts missing and there are processes in place to return even remains from other parts of the world that we have with us,” says Kotze.

She notes that the process of returning remains is a complicated one. The museum needs to track logs and be sure they are returning the remains to the right tribes.

“It is time that they rest,” says Kotze.

“The problem is, the indigenous people did not write and the only written record of them would be if they committed a crime and if your owner or handler wrote about you. This has made accurate tracking of the whereabouts a mission, but we are firm in our commitment to return the remains to the soil they come from,” Kotze.

“These women were someone’s mother or grandmother and they have no names. Who were they, and what were their stories? We as women of colour need not just to be able to say that we are strong, but to prove that we are strong,” says Kotze.

Kotze describes the exhibition as one that brings to the fore the dark past of museums. As for the people whose remains were taken from their homes: “We want their spirits liberated and their souls laid to rest.” DM

Inter-RESTING Times is on display at the Castle of Good Hope for 25 November to 10 December 2018.