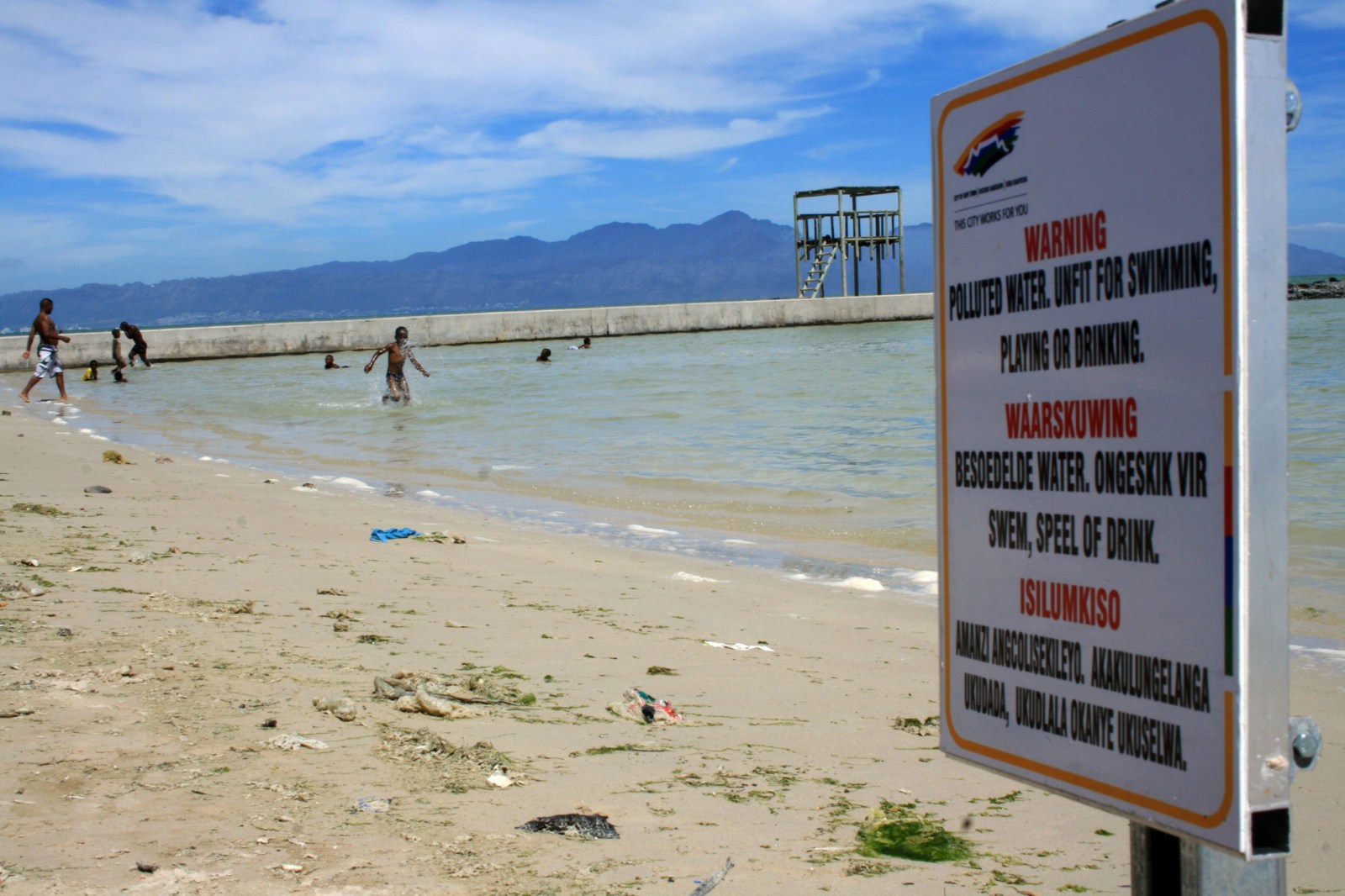 Western Cape. Cape Town. A tidal pool where a sewage leak of a nearby sewage treatment plant contaminated the the pool water. Pictured here are children playing in the contaminated water.

For years, scientists and Capetonians living near the Kuils River have expressed concern that the sewage flowing into the river from a nearby waste water treatment plant is both an environmental and health hazard. Researchers now say that the health consequences of the contamination are growing ever more severe: from people suffering E.coli poisoning of the intestine, to horses born without back legs.

“Apocalyptic” is one word that Professor Lesley Green uses to describe the experiences of people living alongside Cape Town’s Kuils River.

Green, the deputy director of Environmental Humanities South at the University of Cape Town, is deeply concerned about the impact that the decades-old Zandvliet wastewater treatment works is having on the environment around the lower Kuils River.

In an op-ed published on Daily Maverick, Green and four other local and international researchers write that “the citizens of Sandvlei along the Kuils River below the discharge point [from the Zandvliet facility] are suffering an array of medical complaints so severe that they have resulted in surgical interventions (for E.coli poisoning of the intestine or the cardiac system) or the need for shopping-bag quantities of medicines for sinus and respiratory infections”.

In one of the most extreme examples of the potential effects of the contaminated water, the researchers cite the case of a Sandvlei horse which gave birth to a foal without back legs.

Fellow researcher Nikiwe Solomon, who is completing a doctoral dissertation on the Kuils River, told Daily Maverick that she had been shown the medical records of a local woman who had to have part of her colon removed due to high levels of E.coli.

“On Monday I heard from a horse farmer who just lost another horse,” says Solomon. “He has gone from 30 horses to three. He has had a vet come through, and most of the problems have been because of levels of E.coli in the colons and gastric systems.”

Solomon says that water samples from the Kuils River sent to the South African Bureau of Standards for testing on 22 November have revealed E.coli levels of between 200 and 36,000 per 100 mililetres. Acceptable levels are considered to be around 80 per 100ml.

In the past, the City of Cape Town has claimed that the Zandvliet facility only discharges treated effluent. The researchers say, however, that in November they observed the wastewater treatment works discharging “millions of litres of what we observed to be raw, unfiltered sewage into the Kuils River”.

Limberg said, however, that this was the result of “considerable unapproved/unplanned development by residents of the catchment area – which extends northward from Khayelitsha towards Kuils River – which is resulting in the capacity of the plant being stretched and at times exceeded”.

The councillor said that human waste from “illegal settlements” is also contributing to the contamination of the river, as is the misuse of the sewer system in the area by residents flushing substances down toilets which interfere with the free flow of sewage.

The researchers say that the idea that the problem is caused by residents in the area is only valid up to a point.

“Indigent communities and Cape Town’s rapid population growth are contributing [to the problem], but where the City could have done something, they haven’t,” says Professor Leslie Petrik, of the University of the Western Cape’s chemistry department.

“They are relying on old [waste water treatment] plants designed to treat a population which was much smaller. The old plants are designed with technology that was available 20, 30 years ago.”

The researchers point out that that the Zandvliet plant was built before many of the new chemicals which currently flood sewage systems were introduced. As a result, it is incapable of adequately breaking them down. These chemicals are then washed out into the ocean and contaminate marine life.

Petrik and her colleague Cecilia Yejide Ojemaye have conducted research into the contamination of False Bay fish in 2018, with disturbing results.

“We are finding huge levels of ibuprofen in snoek,” Petrik told Daily Maverick.

Pharmaceutical products aren’t the only substances which can’t be adequately treated by plants like Zandvliet. Coffee is another problem: Petrik says they are finding traces of caffeine in sea urchins.

“We are all so in love with chemicals that we use far too much every day. We also need to start asking pharmaceutical companies why they are manufacturing drugs which are so poorly metabolised. The way that we design drugs needs a lot of attention.”

The researchers stress that solutions to the waste treatment problem do exist. Petrik says that plants need to add advanced oxidation systems at the end of the process to deal with effluent properly.

“There are so many innovations developed in South Africa to deal with wastewater and water management, but the uptake is quite low,” says Solomon.

Meanwhile, the City denies that its handling of sewage is negligent.

Limberg told Daily Maverick: “In general, the treatment effluent discharged from the City’s WWTPs [waste water treatment plants] complies more than 80% with the standards required by the regulator.”

It’s not an answer that satisfies Petrik.

“They are right – in the sense that the regulator’s regulations are very out of date and don’t specify how to deal with [modern] compounds,” Petrik says.

“But they are also blatantly lying because a third of the City’s sewage goes into the ocean untreated except for being filtered through a 3mm sieve. Sewage from Salt River all the way to Hout Bay, including the Atlantic Seaboard, is not being treated. They want to keep the city pristine to attract tourists, but if they keep dumping sewage into the ocean nobody will want to be here.”

Green stresses the point that discharging sewage into bodies of water does not only contaminate the water in question. In the case of the Kuils River, for instance, mud cakes at the side and blows off, contaminating the air as well.

“What’s the impact on the Khayelitsha community when the dust blows?” Green asks.

Forcing the low-income communities around the river to bear the brunt of inadequate sewage disposal, she says, is an example of “environmental racism”.

The City has been planning to upgrade the Zandvliet facility for some time, but there have been delays due to problems with the tender process. Limberg says that the commissioning of a R1.5-billion upgrade to the plant “is anticipated by December 2023”.

Water from the Kuils River is now being sampled on a weekly basis by the City, and signage has been re-erected to “ensure that all residents are aware that the river is not safe for swimming or drinking”, according to Limberg. The City is also undertaking a health survey to investigate the concerns of the community.

Petrik believes that such actions are a step in the right direction, but long overdue.

“We would love to help the City, but the City has been so disrespectful of our science and so obdurate that I don’t know how to any more,” she says.

“I have given seminars on several occasions to the City and been accused of spreading alarmist nonsense. If they disrespect hard science, what are they going to respect?”

The residents of the area around the Zandvliet facility, meanwhile, have described themselves to Solomon as “the City’s waste”.