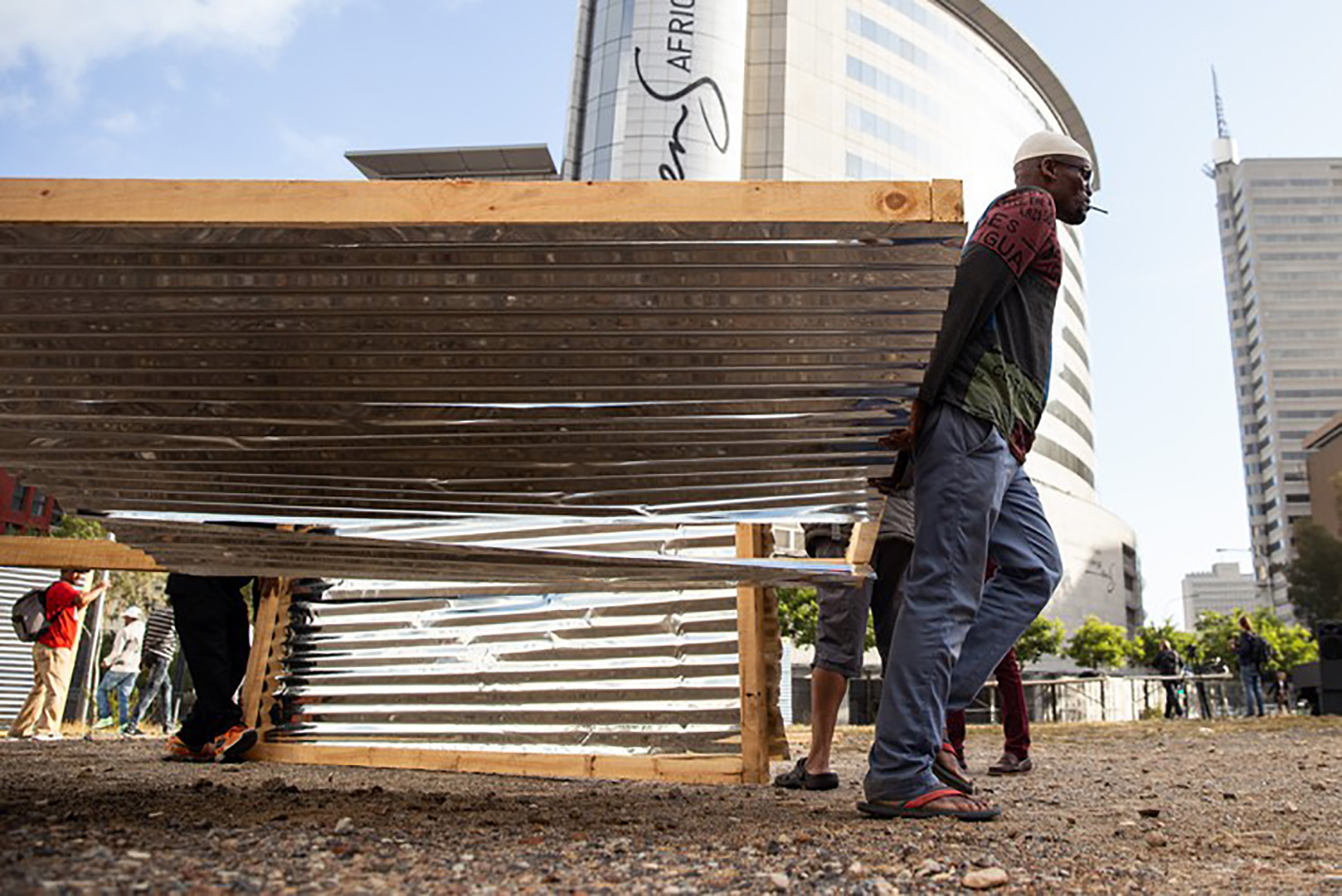 “We are serious about decent and well-located affordable housing,” say protesters. By Aidan Jones

About 100 housing activists built shacks on a vacant piece of privately-owned land in Cape Town’s city centre at sunrise on Tuesday.

Protesters arrived with zinc sheets and wooden frames in tow and within half an hour seven shacks stood along the border of the site, dwarfed by the surrounding high-rises.

The land in question is Site B in the Foreshore. It was auctioned by the City to Growthpoint Properties in 2016 for R86.5 million, far less than market value for the proposed 46,000m2 development.

Reclaim The City led the protest with the support of civil society organisations #UniteBehind and the Social Justice Coalition. Nkosikhona Swartbooi, a Reclaim the City supporter, said the shacks formed part of a “symbolic protest” and that no permanent occupation was intended.

“We are here today to say to government that we need decent and well-located affordable housing. We are serious about this,” said Swartbooi. “We want a Cape Town that is more inclusive. Inclusivity for us means poor and rich people living side by side.”

He said that the location and clear visibility of the protest presented “a chance for Capetonians to think about the kind of Cape Town we want … Are we satisfied that one half lives differently from the other?”

“It’s been 24 years since we’ve been a democracy and the fact that we don’t have any affordable housing in the inner city is unacceptable, it is absurd,” said Zukiswa Vuka, an organiser at #UniteBehind. “Especially considering the fact that we have a constitution and a history of people who were dispossessed of land.”

Vuka said the combination of urban sprawl and a dysfunctional transport system is “a mess” and perpetuates inequality.

Axolile Notywala, general secretary at the Social Justice Coalition, said, “Many of our members live in informal settlements, in unsafe areas, undignified areas, while we have such pieces of land in the City of Cape Town.”

Notywala said it would be easy for the City to build social and affordable housing in the city centre. “But that has not been their priority,” he said.

Mandy Louw, one of the protestors, stood among the others holding her child with tears in her eyes. She said she had been born and had grown up in Sea Point, but had to move out, to Delft and Manenberg, but had left because of gang violence.

For a year she has been part of the unlawful occupation at Helen Bowden Nurses Home with her five children. “It’s safer here and there’s more access to schooling for the kids.”

After about an hour law enforcement arrived and spoke to a legal representative for the protesters.

Nadine Kuzmanich, head of communication at Growthpoint, told GroundUp that the company had approached lawyers. “There is nothing more we want to say at this stage.”

Questions around the sale of Foreshore property

“Site B was auctioned [to Growthpoint Properties] for R86 million, which is significantly less than it is actually worth. The City lost up to R140 million that could have been spent on affordable housing and informal settlement upgrading,” said Nick Budlender, a researcher at Ndifuna Ukwazi. GroundUp reported on this (see here and here).

“We still need the terms of reference of that inquiry,” said Swartbooi. “We won’t let this get away, we need government to respond and say how they are going to get back that R140 million that we lost.”

Notywala said, “we are not necessarily saying that some [city-owned] land shouldn’t be sold, but if it is being sold there must be value for that particular sale. Then the City can use that money to subsidise and build elsewhere.”

Bevil Lucas, who has been part of the unlawful occupation of Woodstock Hospital since September 2017, said land was not the issue.

“Your parents lived in a shack, you also live in a shack. From a shack to a shack … Land is available, land is not the issue, it’s the political will,” said Lucas.

Alderman James Vos, the City’s Mayoral Committee Member for Assets and Facilities Management, said the City’s investigation into the sale was underway “and it is being treated as a priority matter”.

“The City cannot commit to time lines as it could hamper the investigation. Growthpoint’s application for development rights is being processed and due process will be followed.” 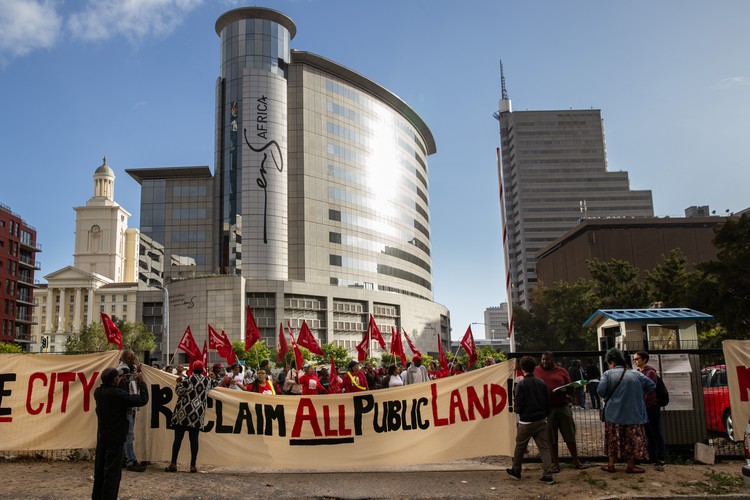 According to Ndifuna Ukwazi, the property was sold for R140 million below market value. 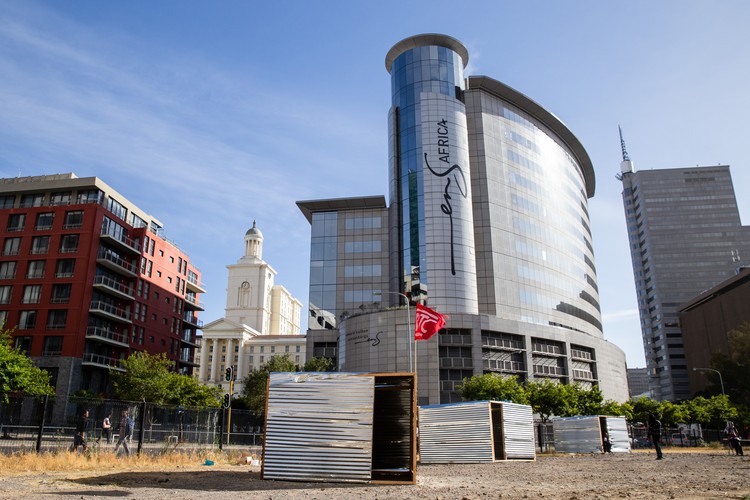 Seven shacks were erected. Protesters said that they were planning to stay on the site for a week. 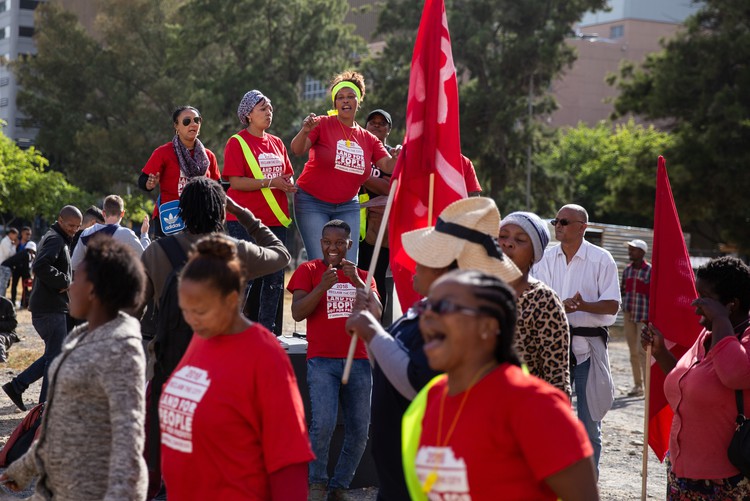 The protest was led by Reclaim The City and supported by #UniteBehind and the Social Justice Coalition.