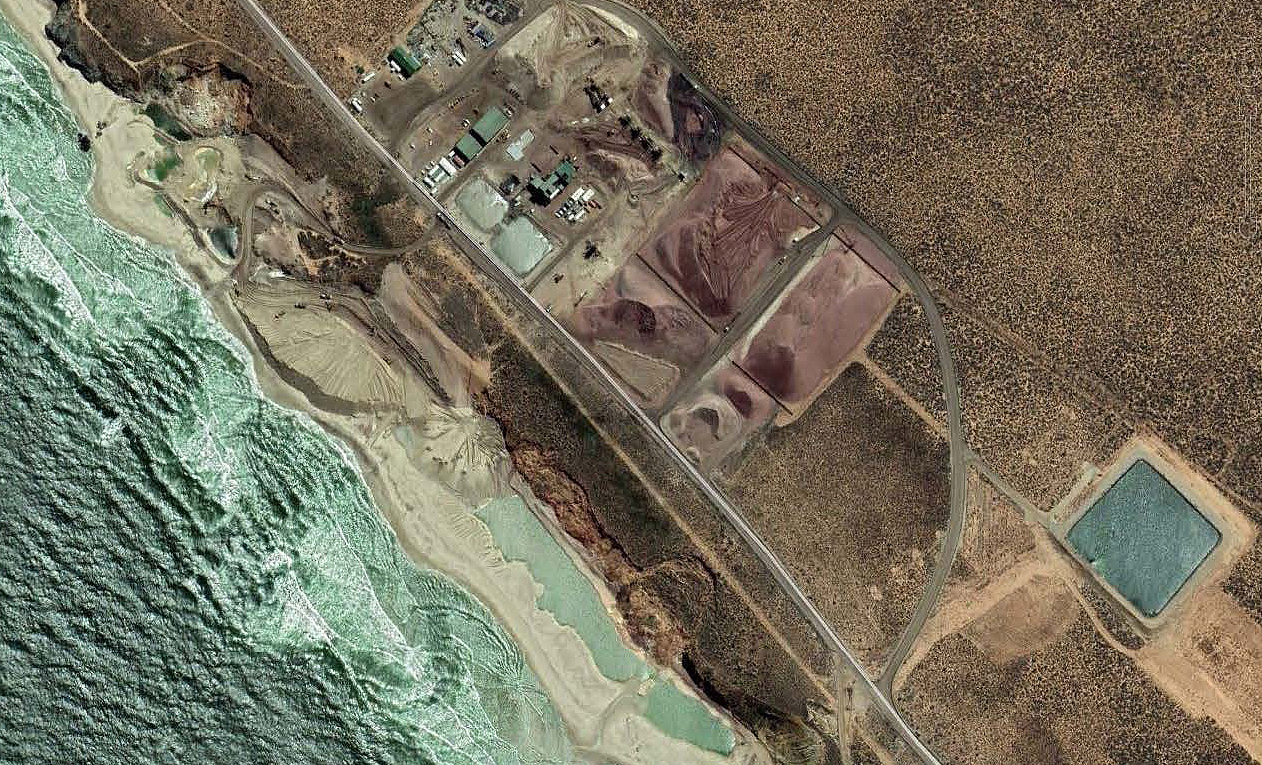 This Google Earth image, dated 15 March 2018, shows four collapses of the sea cliff in front of the Tormin mine processing plant.Photo: Supplied by Allen Lyons

The coastal sea cliff overlooking West Coast beaches being mined by an Australian-owned company has collapsed in four more places. This follows the catastrophic 2015 collapse directly in front of the mine’s processing infrastructure.

Three of these new landslips are within a few hundred metres of the 2015 collapse at the Tormin mine, near Lutzville some 400 kilometres north of Cape Town. It is here that mining company Mineral Sands Resources (MSR) is excavating valuable heavy minerals such as ilmenite, leucoxene and rutile (titanium oxide minerals), zircon and garnets from several beaches.

The new cliff collapses were spotted on Google Earth images by Allen Lyons, secretary of the Strandfontein ratepayers’ association, a popular coastal holiday village on the southern bank of Olifants River estuary, south of Tormin.

Lyons, a retired geologist, said he had started compiling mining data from satellite images in an attempt to understand the collapses on the cliff that stands between 30 and 50 metres above the sea.

“From my satellite image interpretation it appears that there have been four other cliff failures since the original collapse of 2015, and most of the new collapses are as big or bigger than the 2015 collapse,” said Lyons. “My preliminary findings indicate that the new collapses are occurring in areas where the beach has been mined more than once and where mining benches have advanced to within 10 metres of the toe of the cliff.” (A mining bench is a narrow strip of land cut into the side of an open-pit mine.)

Many environmentalists and critics of the mine are convinced that the mine’s operations caused the 2015 cliff collapse. This was denied by MSR, who pointed to “documented specialist studies on the cliff face [that] suggest the cliff failure in part is due to high wave energy and tidal action as well as climatic conditions and storm water run-off”.

Lyons said it appears that Tormin has attempted to rehabilitate the 2015 collapsed area with sand tailings from the mine’s processing plant. He estimates that between 500,000 and 600,000 tons of sand has been borrowed from other beaches to “prop up” the 2015 collapse.

“If that is so, it means that sand from other vulnerable beaches is being used, increasing the likelihood of other cliff collapses within Tormin’s licence area,” said Lyons. “It’s clear to me that the rock mechanics issues associated with Tormin’s beach mining have not been resolved. It’s critical that these issues get resolved, particularly now that Tormin (MSR) is planning on expanding its mining footprint.”

But recent documentation by MSR consulting company SRK states that “there is no specialist or technical basis to support the contention that the non-return of mining sand to the beach has contributed to the cliff failures”.

According to SRK’s environmental impact assessment report for Tormin’s expansion plans, the geotechnical impact of beach mining on the sea cliffs and dunes was assessed and found to be of “very low” significance, both before and after mitigation measures.

SRK recommends enforcing a 10-metre buffer zone from the toe of the sand dunes and cliffs towards the sea in which no mining or disturbance may take place. But several critics say there is already a 10-metre exclusion zone in place that has been ignored by MSR.

In 2017 MSR applied for a massive extension of its existing mining right at Tormin that includes ten additional beaches north of the mine. The application was made through a Section 102 application under the Mineral and Petroleum Resources Development Act. An environmental impact assessment report about this application has just been submitted to the Department of Mineral Resources (DMR).

However, the proposal is facing strong opposition, including from the Western Cape’s Department of Environmental Affairs and Development Planning (DEADP) department. DEADP is highly critical of MSR’s mining record at Tormin, and is one of several other “interested and affected parties” arguing that Section 102 is not applicable and that MSR should be applying for an entirely new mining right.

In the summary of comments by interested and affected parties in SRK’s environmental impact assessment report, DEADP is quoted as stating: “This Department recommends that any future application by MSR not be considered until such time that the matter relating to the unlawfulness of Tormin Mine has been resolved and compliance with all conditions of the environmental authorisation has been presented.”

MSR is currently facing sanction by the DMR for two specific violations of environmental conditions in its existing mining right. It was forced to submit Section 24G applications in terms of national environmental management regulations for “rectification of unlawful commencement of the listed activities” – in effect, the retrospective legalising of unlawful acts. This came after an independent audit uncovered unlawful clearing of an additional 3.9-hectare area adjacent to the processing facilities, used for stockpiling, and construction of a 2.2-hectare dam.

The DMR told GroundUp that no decision on the Section 24G application would be taken until it had decided on the amount of a fine to be levied on the mining company for these two environmental violations. The rectification application would only be finalised “after the fine is determined and paid”.

The Department also emphasised that MSR’s two applications – the Section 24G rectification and Section 102 extension applications – were separate “and are treated as such”.

The DMR received MSR’s final environmental impact assessment report and an environmental management programme for the proposed extension on 14 November. In terms of the National Environmental Management Act the department had 107 days to consider and take a decision, giving it until early March 2019.

MSR did not respond to a request for comment. DM