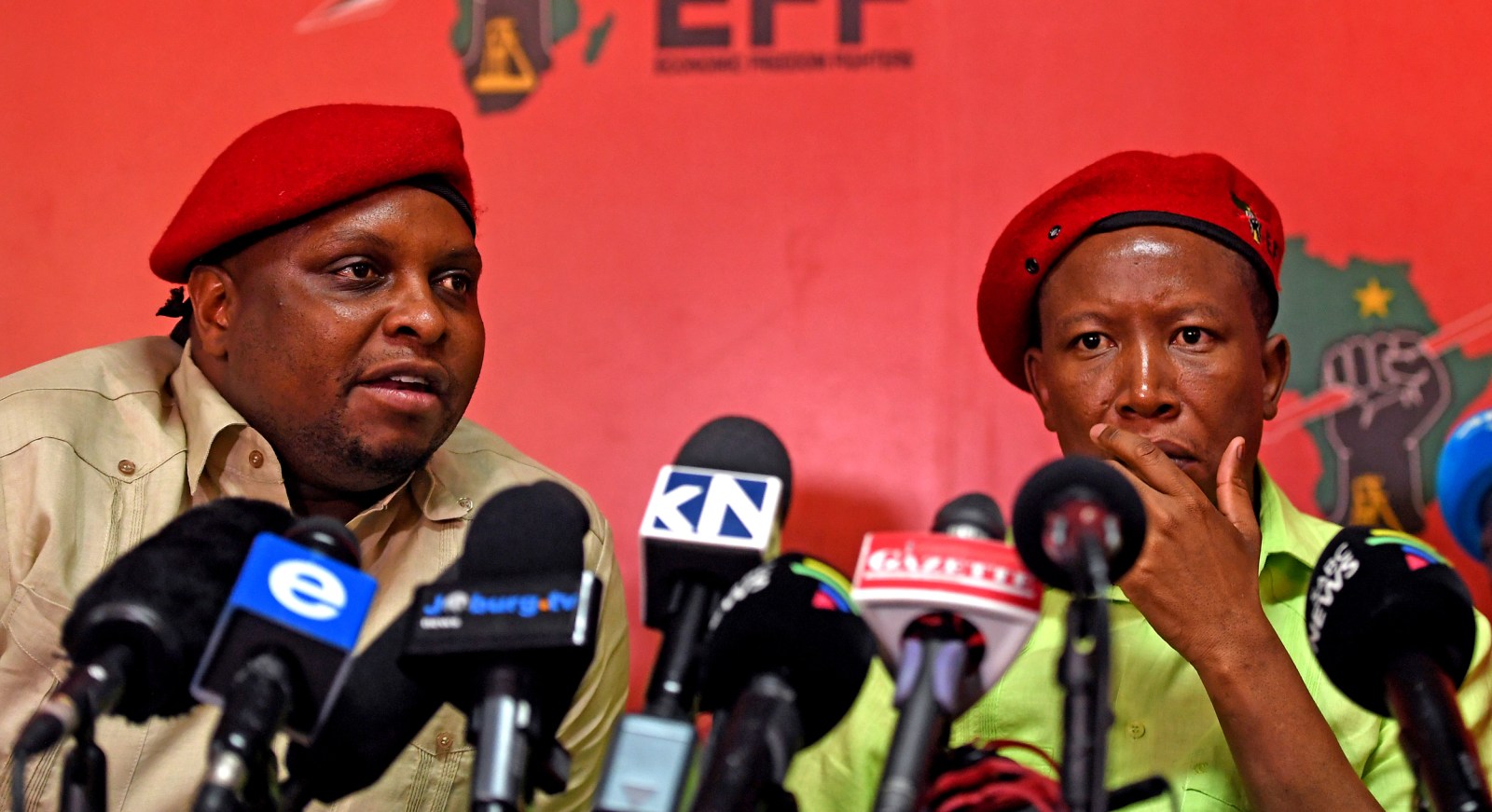 The domination by the Economic Freedom Fighters of our national political discussion appears to show no signs of abating. The tone has now changed in a very important way, in that the party no longer appears to be able to dictate the agenda. Instead of reporting merely on the attacks launched by the party on various other political figures, several media outlets now appear to be concentrating on exposing the party leadership as corrupt. By virtue of being unable to respond to claims from these reports, the EFF is losing the ability to control the national debate. It is now becoming important to ask what hard limits there may be to the party’s leaders so publicly not practising what they preach.

To glance through what is still called the “mainstream” media over the last few days is to notice how often EFF leaders’ expensive lifestyles are featured. The Mail & Guardian reported on Friday how the party’s deputy leader, Floyd Shivambu, lived in a flat in Fourways Johannesburg, allegedly paid for by money that originally came from VBS. On Monday, EWN reported how EFF leader Julius Malema’s family was living in a property owned by the cigarette-smuggler Adriano Mazzotti. At the same time, as if to explain where the money comes from, the amaBhungane Centre for Investigative Journalism suggests the EFF is determining tenders in the City of Joburg, and then receiving kickbacks from the firms which receive the tenders.

While the EFF often responds to such reports with a claim that the media is “policing black wealth”, the journalists are simply doing their job by putting facts together and revealing hard evidence of the EFF’s leadership’s alleged corruption. The reason for this is obvious, and is the same reason journalists focus on certain politicians everywhere. Apart from an obvious illegality, it is also about an eye-popping hypocrisy. The EFF has based its entire political being in the opposition to corruption. Much of its campaign against former president Jacob Zuma was about exactly this issue, particularly on issues like Nkandla.

Now, from what can be publicly seen, the EFF appears to be guilty of the same behaviour as their hitherto nemesis, Jacob Zuma. That could be an existential threat to the “anti-corruption” fighters.

In a way, this is exactly the same as it has happened countless times in other democracies, often around issues of personal morality. Time and time again a politician has campaigned on platforms of moral probity and commitment to justice, only to be found to have indulged in behaviour they had previously condemned – corruption, extramarital affairs, etc. It is this aspect that gives the exposés about the EFF’s leadership the extra sting they are feeling at the moment.

One of the EFF’s main lines of attack is to claim that they are the victim of some kind of media onslaught, mainly on a racial basis. So far, they have presented no evidence of any conspiracy against them, and no evidence either to show that media organisations are working together. What is much more likely is that because of their own behaviour, there are plenty of people who have information that bolsters the claims of corruption, especially against Malema and Shivambu. These are former neighbours, people who claim to have noticed certain things, others who were perhaps the victim of broken promises. Others might well be political enemies who have sat on information for some time, but now see a tsunami reaching the EFF’s shores. Journalists also know that one report of corruption against a public figure will lead to more claims, and more tip-offs coming through.

While the EFF may still claim that it is the victim of an unholy political campaign, the SA public is still awaiting any proof showing the claims against them are bogus. No information presented as fact by media organisations has been refuted. While it could claim that it does not have the time, or has more important things to do, the media claims out in the public domain are still the best obtainable truth.

These latest reports also suggest that the threats made by the EFF’s leaders against certain journalists did not have the effect of muzzling the media. Instead, the reports keep coming. In the last few weeks it became painfully obvious that the EFF does not have the power to shape the narrative any more.

All of these issues, taken together, pose questions that may well determine the future course of our politics in the longer term. One of those questions has to be how voters react to the EFF’s travails, and their impact on the 2019 electoral dial.

Generally speaking, it is presumed that most voters dislike hypocrisy and bullying, and that poor people will not vote for someone who is known to be rich, while claiming to “be just like them”. There of course many examples of where this is not true. Donald Trump is hugely rich and yet millions of poor white Americans voted for him. However, he was careful never to claim that he had the moral high ground in any way, thus he was not a hypocrite in the fashion that some may now claim the EFF to be, and with a good reason.

Then, as always in most democracies, there is the complicated issue of identity. Malema’s brand is designed to appeal to those who have not experienced the end of economic apartheid. They tend to be young, and feel that some brashness is needed to upset the current order. For them, there may be no other option, particularly if they believe that the “establishment” is not really going to do anything for them. This inevitably translates into a core group of people who will always vote for the EFF, no matter what. It is simply because it is the closest thing they have to any kind of radical change.

However, there may also be important limits to how big that group is. The repeated reports of corruption, which are not fully denied, or at all, may well have an important impact on whether the EFF is able to grow. The EFF uses Twitter as perhaps its main communication tool. This suggests that it believes its constituency is on Twitter, and uses the medium often. These people are then both online and informed, and thus would be aware of the repeated corruption exposés against the party’s leadership.

In other words, these voters are not unaware.

This appears to put the EFF in a difficult position. Some of its leaders simply lash out. Over the weekend a group of EFF members disrupted the operations of a Vodacom store in Polokwane, saying they were angry at the display of an image of Malema and Shivambu with the caption “Abusers of Democracy”. The image (which was created by Daily Maverick) had been shown at the annual Vodacom Journalist of the Year event during a speech by Corruption Watch Chair Mavuso Msimang. While this kind of action may grab headlines (the EFF has now formally denied that it arranged the protest), it does nothing to quiet the corruption claims faced by the party’s leaders.

Malema and Shivambu now face a choice. They can continue to be subject to these reports, and hope that the Christmas season comes in time for voters to lose interest. Or they can try to gain the initiative by launching yet another attack on either the media, or a politician. But that risks losing whatever credibility they may still have with potential voters. Not the best choice to make, just in time for national elections. DM