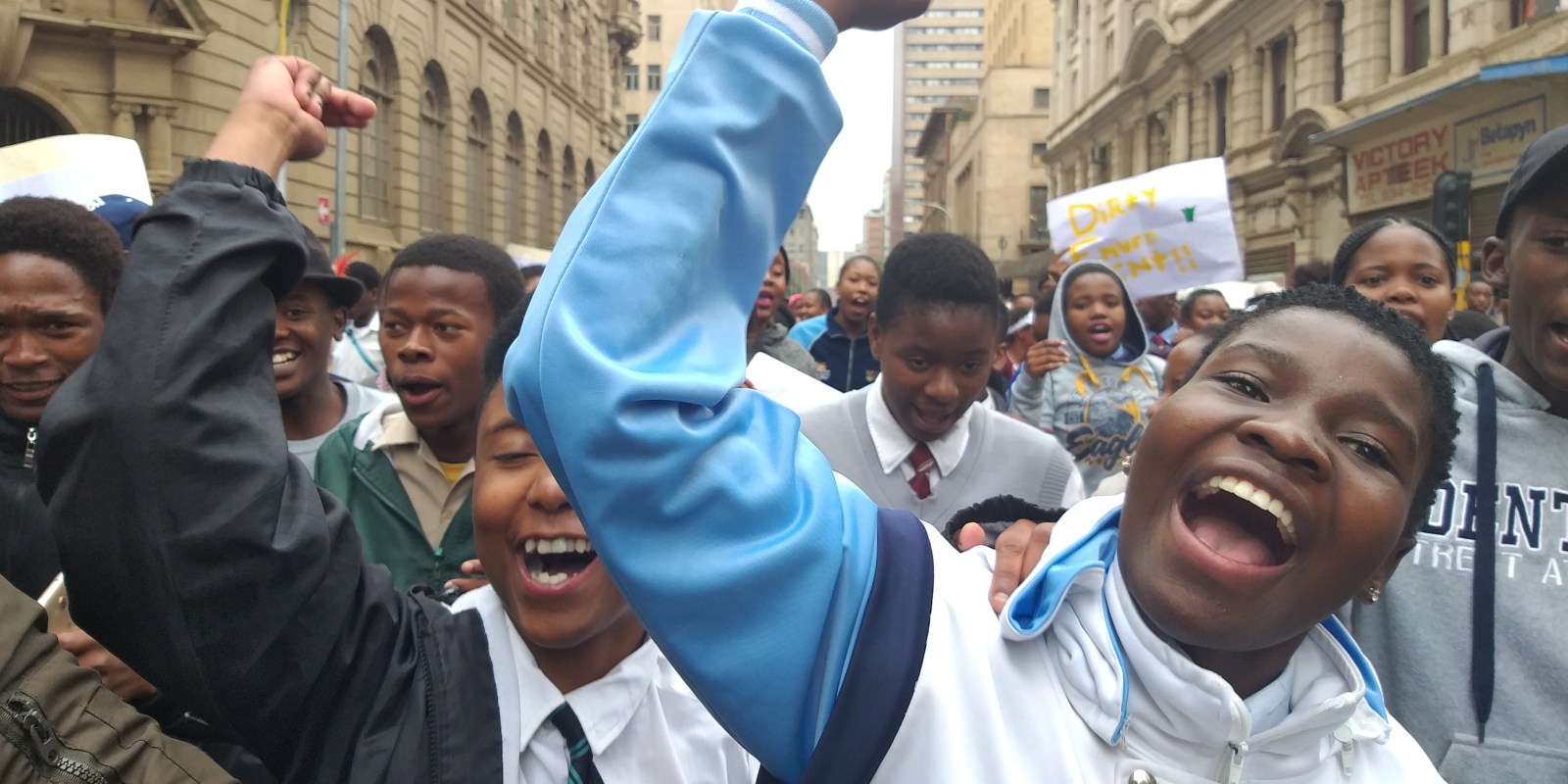 Learners from Gauteng schools take part in an Equal Education march to the provincial department of education on Thursday, 29 November 2018. Photo: Bheki Simelane

The Gauteng Department of Education may have ensured that public schools in the province have access to some form of sanitation, but it still does not escape the watchful eye of rights group Equal Education. On Thursday 29 November the organisation marched to the department to demand it meet more than just the minimum requirements for schools.

In one Gauteng school, 221 pupils share one working toilet. This was revealed in the latest Equal Education Gauteng schools sanitation report handed to the department on Thursday.

The report, which includes the result of a survey of the sanitation conditions of 38 of the 50 worst public schools in the province, highlights that while the norms and standards for schools are to ensure that minimum infrastructure and sanitation standards are upheld in schools, “they cannot be the end goal”.

“Provincial education departments — especially the wealthy and historically privileged ones such as the Gauteng Department of Education — should strive to deliver more than just the bare minimum to stay out of court,” it reads.

The report called on the department to eradicate the high learner/toilet ratios, set standards for maintenance staff, publish figures on sanitation spending specifically, for schools to have maintenance committees and maintenance plans and for greater transparency throughout the procurement process.

Sanitation at schools is a hot-button topic across the country after the deaths of several children who fell into pit latrines at school.

Jennifer Ngobeni, 23, an Equal Education facilitator who took part in Thursday’s march, said her motivation to join Equal Education stemmed from her desire to see learners and teachers succeeding under safe and healthy conditions in schools across the country.

“In the audited schools, we discovered that there was no soap, no sanitary bins, broken down toilet taps and doors and that many of the toilets were dysfunctional… The health of pupils is under serious threat in schools,” she said.

Ngobeni said the challenges were not limited to the provincial education department but extended across the country’s nine provinces.

Equal Education Gauteng members began advocating for improved sanitation after a survey of 11 schools in Tembisa in 2013 revealed the deplorable state of toilets for learners.

In September 2014, thousands of EE members marched to the offices of the Gauteng Health Department to demand decent sanitation.

Gauteng MEC for education Panyaza Lesufi responded with a promise of R15-million to spend on sanitary upgrades in all schools in Tembisa and a further R150-million on sanitation in the province.

The Gauteng Department of Education also promised to fix sanitation in the 50 worst schools in the region. The 38 schools surveyed in the latest report were part of those 50 schools.

Kamogelo Makhema, 18, another Equal Education facilitator who completed matric in 2017, said he joined organisation to help ensure the safety of children.

“It’s important that school sanitary infrastructure is restored to retain the dignity of all pupils in our schools,” Makhema said.

BB Myataza Secondary School pupil Marvin Sibande,17, from Daveyton said if the education department was serious about pupils’ academic progress, they would have long since fixed issues relating to sanitation because this impacted negatively on pupils’ health.

“If the department cared they would have long sorted such. Our health is affected and so is learning and teaching,” he said.

Fourteen-year-old Katlego Nzimande, a grade 9 pupil at JB Matabane Secondary School, said he was also inspired to take part in the march because of the dire sanitary situation at his own school.

“There is absolutely zero privacy. You have a full clear view of the person going about their business in nearby toilets and they can also clearly see you because the toilets’ doors are broken,” he said.

Nzimande said when one flushes the toilet, water leaks out from the bottom of the toilet bowl, and that it had become normal to go to class smelling because your shoes were wet from the sewage leak. DM