The List: Explosive spy thriller from a man who lived t...

The List: Explosive spy thriller from a man who lived the life 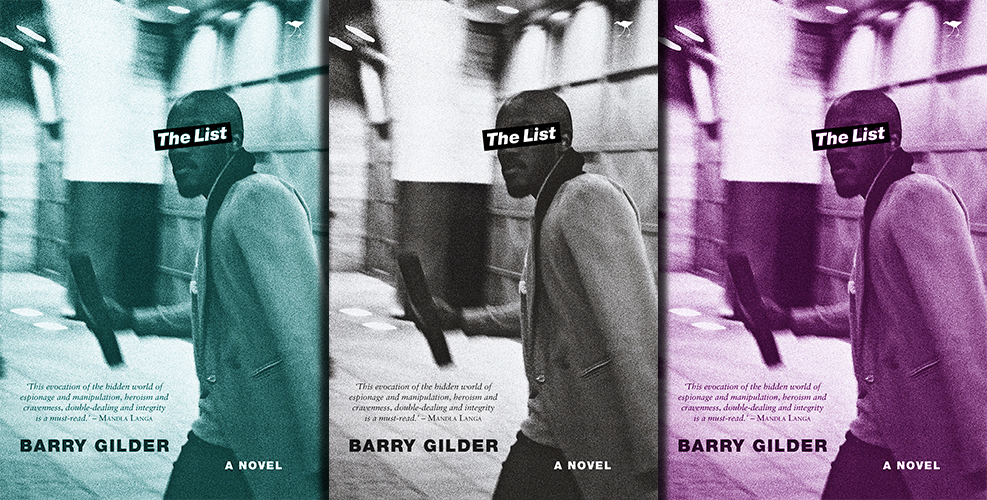 One of the more intriguing aspects of Barry Gilder’s gripping spy novel comes in the Author’s Note. In Songs & Secrets, his non-fiction account of his life in exile, from where he returned to senior positions in government, he was ‘invariably asked: Why are there not more secrets’ in the book. The ‘Songs’ reflect another part of Gilder’s identity as an accomplished musician.

While he was working on the novel, The List, a friend told Barry Gilder “no one will believe that a novel that comes from you is not factual”.

“Be that as it may,” he writes, “this is a work of fiction… any resemblances to actual persons, living or dead, or actual events is purely coincidental.”

Perhaps. But for any who have lived in the South Africa of yesterday and today, the lanes between fiction and reality veer closely together in this book. Gilder, who went into exile in 1976, joined the ANC and worked in its intelligence division, returned to South Africa in 1991. He was appointed deputy director-general of the SA Secret Service and later the National Intelligence Agency, before serving as DG of Home Affairs. He is now a member of High Level Review Panel on the State Security Agency, appointed by President Cyril Ramaphosa.

So The List is steeped in history and knowledge and is both prescient and eerie. It spans 40 years – from the late 1970s to 2020.

Although it’s a thriller, it’s no spoiler to mention that at the opening of a new Parliamentary session in April 2020, the newly elected president is assassinated by “a man who rose from the benches in the centre of the house and stabbed (him) eleven times with a blade concealed in a mobile phone.” This is because this act, reminiscent of the stabbing of apartheid leader, Hendrik Verwoerd, is on page two.

It’s a shocking start to a story that then goes back to 1979 to introduce us to some of the main characters whose lives he tracks over four decades.

It starts with a tense and bizarre scene set in what was then the Eastern Transvaal. Much of the story revolves around shadowy events – and characters – in the area, later to become Mpumalanga. It transverses through time to 2020, when a group of trusted ANC intelligence agents are secretly tasked by a new Intelligence Minister to trace surviving double agents in the ANC to protect the new administration. Their names are apparently on a list handed to Nelson Mandela around the time of the transition and since kept in a secret location. The key members of this group are Vladimir Masilela and Jerry Whitehead, both retired from government. They are men steeped in the struggles of exile, bound by a common past of hardship, comradeship, fear and hope. Because Gilder has lived that past, he evokes it in granular detail – the camps in Angola, the offices in Lusaka, Maputo and London, the return into positions of power in South Africa.

The contemporaneous part of the story is set against a backdrop of an ANC that has emerged out of fractious, recent past, with a former president during whose time the party sank into corruption and lost support. At a 2019 gathering of a new – and much smaller – National Executive Committee, the new president, Moloi, promises “to cleanse the ANC. To rid ourselves of factions and slates and the buying of votes.”

“We’ve been given a second chance,” he says referring to the 2019 elections which the party has scraped through. “Perhaps a last chance.”

Interestingly, Gilder wrote the book after the 2016 municipal elections in which the ANC lost three major metros, in addition to Cape Town, but before the 2017 ANC conference which saw the election of a new president and the proclamation of a “New Dawn”.

The issue of spies – double agents – surviving from apartheid to democracy is not new, nor is the way various forces have spread disinformation about their identity. Mandla Langa, whose commendation of Gilder’s book is on the inside cover, writes “what we have not addressed will certainly rise up to menace us..”

Langa’s own novel, The Texture of Shadows, broadly parallels his own family’s tragedy in which his brother, falsely accused of being a spy, was assassinated by his own comrades.

In 2004, shortly after the first allegations of wrongdoing were made against Jacob Zuma by the then head of the National Director of Prosecutions, Bulelani Ngcuka, the latter was accused of having being an apartheid spy by some of Zuma’s (then) allies. In response, president Thabo Mbeki set up a judicial commission of inquiry. The agent number – falsely associated with Ngcuka – was established to have belonged to a white woman. The unanswered question is whether Ngcuka’s accusers knew that from the start.

And then there is the still outstanding question of why those apartheid perpetrators who either did not apply or were refused amnesty by the Truth and Reconciliation Commission were not prosecuted. Where there have been prosecutions, the families themselves have brought private cases.

In 2015, the former head of the NPA, Vusi Pikoli, deposed an affidavit in support of the family of Nokuthula Simelane, an ANC courier who had been kidnapped, tortured and killed. Her family wanted those who had been refused amnesty for her killing to be prosecuted. Pikoli said senior politicians had deliberately obstructed him from pursuing such cases. Whether this is because they feared tearing the fragile post-apartheid social cohesion, or because they felt it would embarrass some senior people in power is not clear.

In Gilder’s The List, the ANC grapples with a country, even in 2020, not yet, they complain, in its “control” in spite of its political power.

The new president promises a deeper transformation after a period when the country has been mired in misgovernance and corruption. It’s a familiar story.

But the reader is jolted by the narrator, whose voice is interspersed throughout the narrative like a Greek chorus. His tone is reflective, lyrical.

“I tell this story now,” he begins, “in the knowledge – sound I’m sure – that the telling is too late….we knew how it began; we knew how it unfolded; and we thought we knew how it ended.” He is speaking in 2020 from a new exile.

There is a subtlety and to the narrative. The “agents”, revealed to the reader as gradually as an onion is peeled, are not necessarily simple traitors. Betrayal has many faces, most of them more nuanced than a simple binary allows. Some were driven by ideology, others used it to mask ambition and self-interest.

I thought, when reading it, of the as yet unrepudiated story that Zuma, when he was asked to step down from the Presidency, had seriously considered declaring a state of emergency.

The story’s end is explosive, both figuratively and literally. More jolting is the identity of the key double agent, how powerful he is, and who he may become.

No spoilers here but for readers looking for a parallel in our contemporary South Africa, the location of much of the story – Mpumalanga –is revealing.

But then, as Gilder assures us, this is a work of fiction. DM