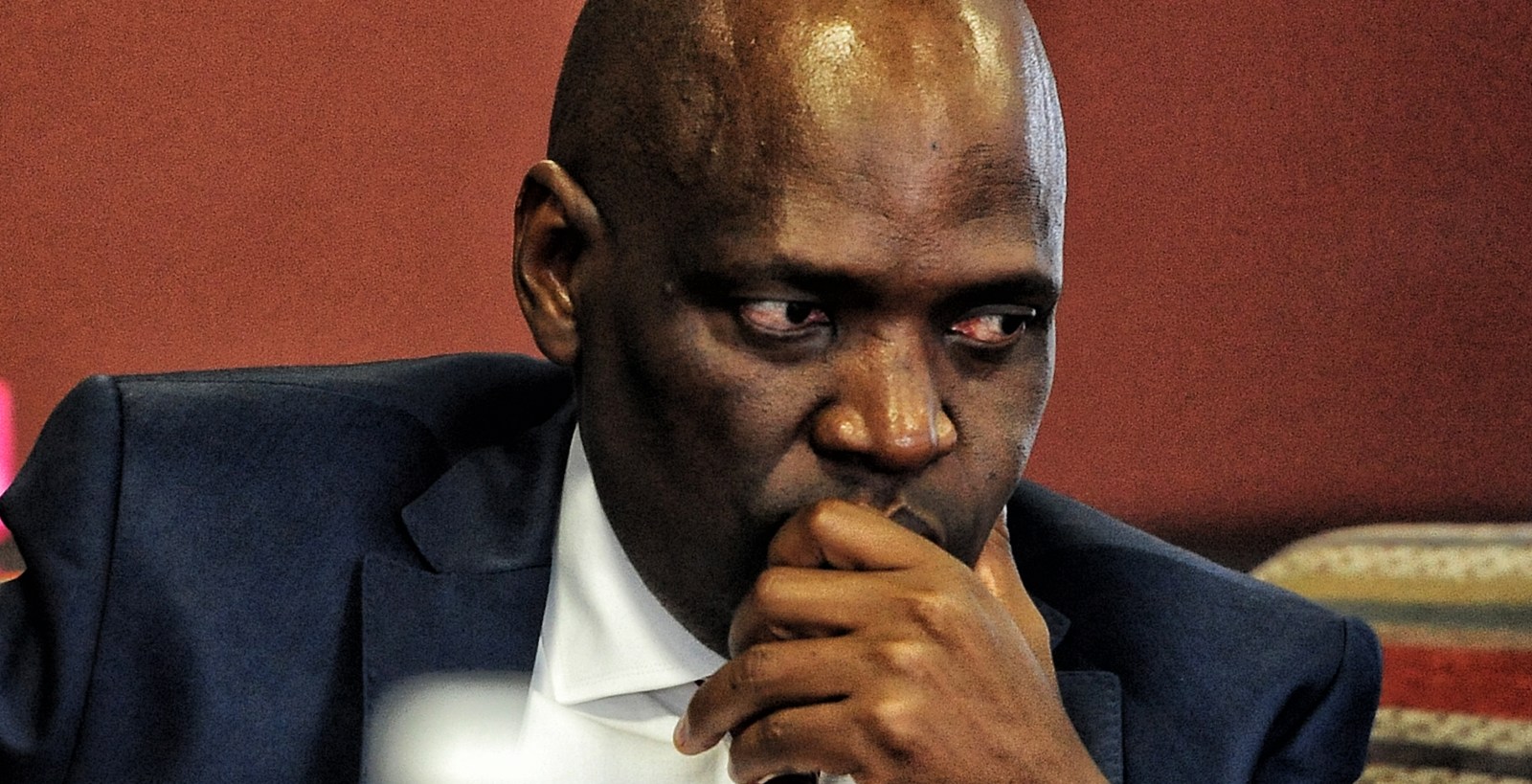 An investigation by the SIU into the almost bankrupt public broadcaster has produced enough evidence to initiate civil litigation in five High Court matters and totalling R166-million, and also three confidential matters totalling R200-million. The SIU is also seeking to declare former SABC Board members ‘delinquent directors’ and to place them under an order of probation ‘for failing to act in the best interests of the SABC’.

On Tuesday the SIU confirmed the Public Protector’s 2014 finding that former COO Hlaudi Motsoeneng had irregularly received an R11-million “success fee” on what has become known as the Multichoice “archives” deal.

It doesn’t end there of course. Not by a small measure.

Not when it comes to Hlaudi Motsoeneng and a coterie of individuals who flourished and irregularly climbed the corporate ladder on his watch, while public funds haemorrhaged from all levels at the SABC.

New Minister of Communications, Stella Ndabeni-Abrahams, only two days in the hot seat, attended Tuesday’s follow-up presentation by the SIU to Parliament’s communication committee. Also present were representatives of the NPA as well as the new SABC board.

In 2017, then President Jacob Zuma signed a proclamation authorising the SIU to investigate maladministration at the SABC. The ambit included possible improper conduct of SABC board members, officials or employees, the unlawful “appropriation or expenditure of public money or property”, the “intentional or negligent loss of public money or damage to public property” as well as various other matters relating to wide-scale allegations of corruption.

Later, the mandate was extended to an investigation into a 2017 lucrative R185-million security tender, also irregularly awarded.

On Tuesday the SIU’s Advocate Jan Mothibi informed the committee that evidence collected supported 23 disciplinary referrals and implicated 14 SABC officials – who have all been charged. This total (14) included six SABC executives and eight officials.

At least one, former SABC group risk management executive, Sully Miranda Motsweni, has been charged with fraud and corruption in relation to fake travel claims for herself and her family as well as for approving two contracts worth R18-million which had not been budgeted for by the SABC.

Motsweni was arrested at her home earlier in 2018. She had been appointed in 2011 by Motsoeneng as general manager of compliance, operation and stakeholder relations before being promoted to acting group executive in risk and governance the following year. Motsweni has also been fingered for the irregular awarding of an SABC Foundation Bursary.

Apart from Motsoeneng’s appointment of Motsweni, that of staffer Thobekile Khumalo and CFO Guga Duda had also been irregular, the SIU found. So too subsequent salary increases Motsoeneng had signed off during his tumultuous and destructive tenure.

Mothibi told the committee that cases referred to counsel for future litigation include Motsoeneng’s, which totals R21,744,002.32; the Sekela Xabiso CA Incorporated matter which amounts to R9,816,023.52 and also a R50-million contract, irregularly awarded by Motsoeneng in 2016 to Vision View to refurbish SABC studios.

The Lornavision contract for R62,733,556.61 for the collection of TV licence fees – awarded by former SABC CFO, James Aguma – is also being prepared for litigation, said Mothibi.

In December 2017, the then board authorised an up-front payment of R5.1-million to Infonomix to redesign the SABC’s websites on a five-year contract.

It was former SABC acting chief financial officer, Audrey Raphela, as well as group executive for commercial enterprises, Tshifhiwa Mulaudzi, who had rushed through the contracts. This while Infonomix had, at the time, had no bank verification or tax clearance certificate.

Mothibi on Tuesday said that Raphela had resigned in July 2018 rather than face disciplinary action. Meanwhile her pension fund benefits had been frozen.

Kubendhran Padayachee, SABC’s Acting Group Executive Technology, also resigned (in May) rather than face a disciplinary hearing. He is allegedly implicated in the Vision View R50-million refurbishment tender. Also linked to the Vision View contract is Bessie Tugwana who left the SABC in March 2018 when her contract expired.

Former head of Procurement, Simon Molaudzi, was dismissed in October 2018, for his links to the Vision View, SekelaXabiso and Gekkonomix contracts but has appealed the dismissal.

Anand Moodliar, group secretary, was found guilty with regard to the Vision View contract and was issued with a final written warning in September 2018, the SIU said.

Group Executive Financial Enterprises, Tshifhiwa Mulaudzi, implicated in the Gekkonomix matter, was found guilty earlier in 2018 and had resigned, the committee heard.

In May 2018 the High Court set aside Aguma’s contract with Lorna Vision for the collection of TV Licence fees. A civil recovery claim against Lornavision and Aguma to recover the over R62-million has since been initiated.

In April 2018 the SABC applied to have the contract with Vision View set aside. The SABC had already forked out over R34-million of the R52-million contract. In November the High Court set aside the Vision View contract.

The SIU and the SABC, said Mothibi, had jointly issued summons on 5 February 2018 in the High Court against Motsoeneng for the recovery of a R11,508,549.12 “success fee” he was paid and also for the recovery of R10,235,453.20 for the irregular appointments and salary increments, suspensions and unlawful terminations of employment which occurred during his tenure. The SIU said it was expected that “more claims will be added to this main claim”.

Motsoeneng, the SIU noted, had said he intended to defend the matter.

Evidence, said Mothibi, in the matter involving Motsweni and fraudulent travel claims amounting to around R45,000 had been referred to the NPA.

With regard to the SABC’s contract with Multichoice, the SIU said that its investigation was focusing on the legality of the original agreement (and subsequent amendments) which ended in July 2018 and whether provisions of the Broadcasting, Electronic Communications or Prevention and Combating of Corrupt Activities Acts had been violated.

It would also be looking at “the roles played by individuals involved in the process and whether any of them benefited unduly”, whether agreements were viable and in the best interests of the SABC and whether the SABC had received all due payments.

An additional issue identified by the SIU was whether “MultiChoice and/or the SABC’s own delegates/negotiation team” had fraudulently “induced the SABC Board into the approval of the agreement by means of failure to disclose information of material significance to them”.

Phase two of the SIU investigation which is still to be completed includes The New Age Breakfast arrangement with the SABC, a security tender, the irregular payment of bonuses, 13th cheques to senior staff as well as R31-million paid for a R10,000 bonus to 3,124 staff.

Also to be investigated is further irregular expenditure including a R5-million SARS penalty and the validity of a sample of Tax Clearance Certificates.

Legends payments of R2.4-million to 53 artists will be probed, the R27-million bill for the SABC Heritage/Thank you Concert, a contract with Rapid Blue for Season 1 of X-Factor, the irregular payment of Motsoeneng’s R1.2-million legal fees, various allegations at the North West SABC Office including the appointments of the Provincial General Manager and the Provincial News Editor.

The overall SIU investigation as well as the evidence and findings of all the individual investigations are in the process of being collated with a view “to the SIU and SABC, bringing an application under section 162 of the Companies Act of 2008, to declare the former SABC Board members delinquent directors and to have them placed under an order of probation for failing to act in the best interests of the SABC”.

The SIU is also investigating “possible contraventions of The Prevention and Combating of Corrupt Activities Act at all levels within the SABC including the Boards” and was also “considering remedial action against individuals where governance failures have occurred and reporting requirements have not been complied with”. DM