From Our Archives: Weak but Vicious – EFF Edition 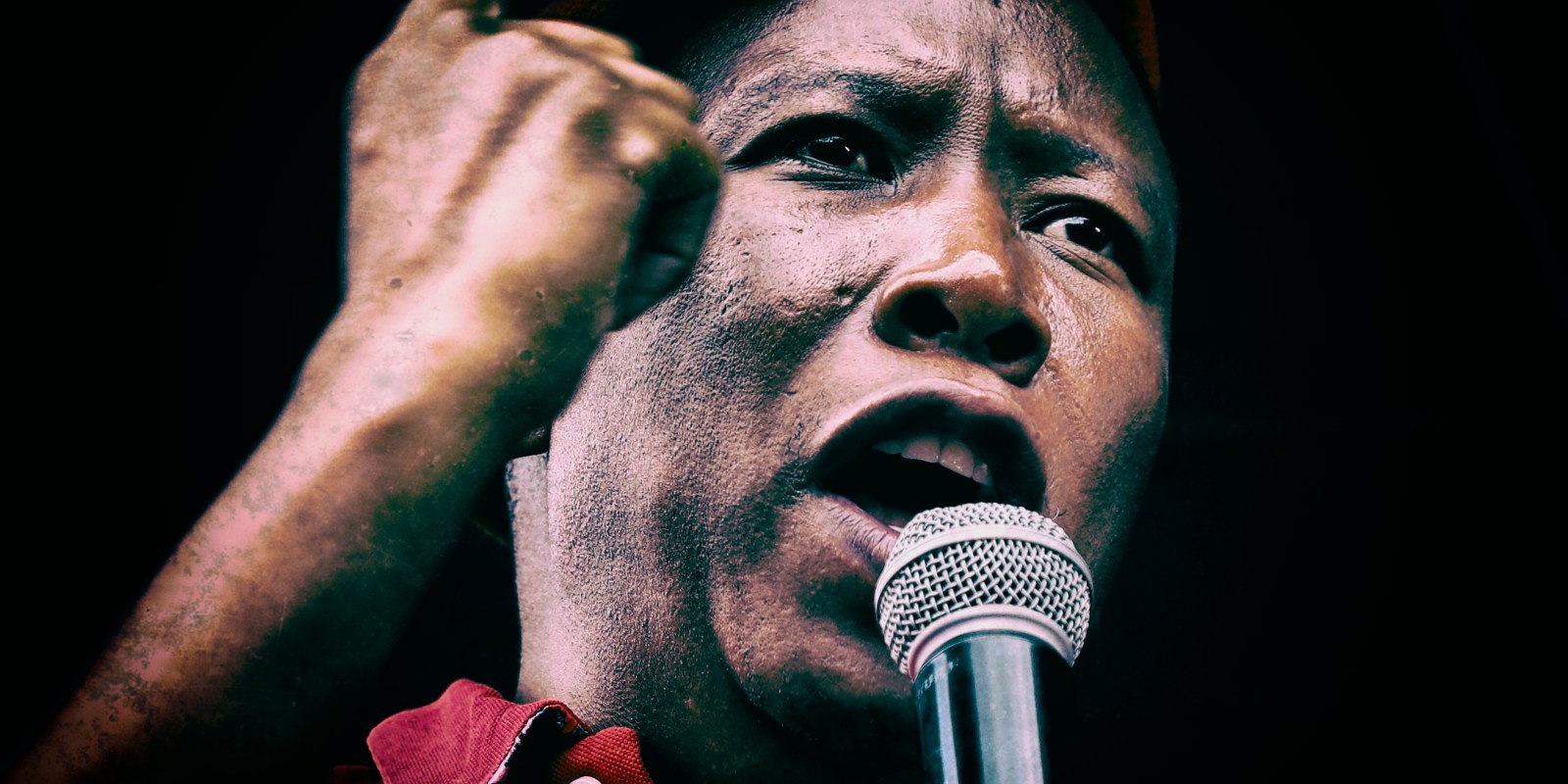 EFF leader Julius Malema addresses party supporters outside the venue of the commission of inquiry into state capture on November 20, 2018 in Johannesburg, South Africa. The EFF is accusing Pravin Gordhan of lying under oath about meeting with the Guptas and are calling for his removal. (Photo by Gallo Images / Sowetan / Thulani Mbele)

It takes extraordinary cowardice to verbally attack female journalists just for doing their job in a society that is plagued with violence against women. That cowardice, however, is taken to a Trumpian level when the suppression of free media, racism and violence against women are wrapped in one continuous vicious attack that has just enough legal caveat – should something horrible happen to the targets of their attack – to claim innocence and throw one's own supporters under the legal bus instead.

Politics by insult is nothing new under the sun. The crazier the situation the country is in, the more detached its politics is from truth, or basic humanity. South Africa has been a country in turmoil for many years, and its politics reflects it well.

The 2019 national elections were always going to get the political blood boiling, the stakes are that high. But the EFF’s leadership is already attempting to incinerate that political blood. The causes of their apparent fever are not difficult to understand – the VBS scandal and the continuous work of the investigative journalists cuts into the core of their message to voters. Their leader, Julius Malema, could well end up back in court again soon on corruption charges in connection with OnPoint Engineering – but on the opposite side would be an NPA with a new boss.

At the same time, by attempting to disrupt the Zondo commission and by supporting Zuma’s helpers, like former SARS boss Tom Moyane, in their legal attempts to keep their jobs, they are actively working on weakening the ANC in time for the 2019 elections, so they can emerge as kingmakers.

In that, the EFF’s leadership is playing a dangerous game of actively graduating turmoil into chaos. Their war-like statements, cheap peddling of conspiracies, screaming in gatherings and on social media, reveal a party that is both in panic and rage. Pushing their supporters into violence but denying responsibility in advance shows the party leadership’s true passive/aggressive nature.

In other words, weak, but vicious.

It was the US president Donald Trump and his press secretary Sarah Huckabee Sanders who reacted with righteous indignation when their continuous hateful rhetoric against the US media groups and Trump’s political opponents was seen by many as the probable incitement that pushed Cesar Altieri Sayoc to send at least a dozen letter bombs in October, just a few weeks before the US mid-term elections.

How dare you say it was President Trump’s fault, Huckabee Saunders hissed at the White House reporters. He was not the one sending the bombs!

For a brief, and unique, moment in her career, Huckabee Sanders was truthful. It was definitely not Donald J Trump, a grand scale con-artist who sailed on the wave of history into the White House and the leadership of the greatest power of all times, who physically assembled and sent the letters filled with explosives to his opponents.

But, inversely, it was not Cesar Altieri Sayoc, a small time Florida-man, who woke up one day in a pure vacuum and decided it was a good time to bomb the people he had never heard of until a few years before, before Trump’s escalator descent into casual evil. Hillary Clinton? Yeah, he’d probably heard of her. Joe Biden? Possibly. George Soros? John Brennan? Kamala Harris?Give me a break.

Trump may have weaseled his way out, mostly by injecting yet more madness into the news stream, but everyone knew it was his words, and his alt right echo chamber, which eventually translated into Sayoc’s action.

He’s not alone, of course. Headlined by a man who would not accept responsibility for anything under the sun, little Trumps of the world stoke fires of anger and violence in their supporters, most of them forgotten people who lost life’s lottery and were further let down by the decades or rampant neoliberalism that didn’t care about the common man.

The truth is, these “mighty” populist leaders are personality profiles in cowardice.

Which brings me back to the EFF.

Its mighty, brave leadership enjoys too all the benefits of starting the fire against the news media, but then courageously runs away from any responsibility.

In their increasingly panicky, shrill tweets and social statements, they bend the truth, spew nonsense and purvey fantasy. They call their supporters into war against anyone who crosses them, and yet pull back at the end just enough to create space for good old plausible deniability. They also see media clearly as their biggest threat, with the NPA and the Hawks still recovering after years of capture.

Like Trump, should somebody get hurt, they will bravely and responsibly claim they have nothing to do with it. And even if no one gets hurt, the logic goes that journalists and members of the prosecuting authority and judiciary will think twice before doing their jobs in face of the verbal onslaught.

The EFF national chairman Dali Mpofu, an Advocate, thinks that improbable feat of logic, like comparing an opportunity to respond to investigative journalists’ legitimate questions, within a more than reasonable 48 hours, can be compared to the treatment of black people during apartheid and that more than just a few diehard EFF members and Twitter bots will accept that argument?

So does that give you licence to publish blue LIES and fantasy about me?

I have not seen any questions from you..You never called me!

Like you I work for a living.I’m NOT your garden boy who must jump at the exact same time that you feel like doing YOUR day job..VERSTAAN JY?? https://t.co/ft22ktoreB

For one only too brief moment, the EFF could have been somebody, they could have been a contender. In the late Zuma years they fought for freedom of expression and media, they took a stand against corruption and even participated in a standing ovation in Parliament in support of Pravin Gordhan when he was one of the last holdouts against Zuma’s machine. When media reported with indignation the physical abuse that was meted against them on many occasions in Parliament, they supported the journalists too. When the #GuptaLeaks broke, they were there to demand accountability from the corrupt.

But they could shapeshift only for so long.

It is remarkable how reminiscent their new strategies are of the Bell Pottinger-fuelled Gupta moves:

Malema says this in a speech and then EFF media turns it into a tweet which goes viral. We get attacked by EFF trolling army. It happens every day. Once marked like this, it’s open season by the digital army. @RanjeniM is threatened and attacked every day. This must end. https://t.co/gYZ48hrftx

Now that they are caught in scandals of their own, the very same media is part of Stratcom, the journalists are either white racists or black servants of the same racists. Abusing mostly female journalists on social media? Check. (Call a particular journalist a Satan? Check-Check) Calling investigator a bastard? Check. Name-calling Deputy Chief Justice? Check. Like in the old days when Malema and Shivambu’s Youth Leaguers merrily wrecked downtown Johannesburg while they watched from the top of Luthuli House, the EFF are now a force of chaos. Remember when Malema kicked out the BBC journalist out of the press conference, screaming “Bastard!” and “You bloody Agent”? Same thing.

But the EFF are wrong if they think that is to their long term advantage. South African democracy was fought over too hard to be hijacked again. It didn’t happen when the Guptas controlled their own marionette, it won’t happen through screams and incitement of violence against SA’s institutions of democracy that saved the country when everything else was captured.

Judges, investigators, journalists, civil society, will not be scared. Some may pause, some may even check out, but the people who confronted Zuma will continue confronting anybody attempting to pull South Africa back into the time of unaccountability, calls for violence against them notwithstanding.

Leaders’ true nature emerges when they are tested under pressure. The EFF leadership has failed that test. No country should be led by the weak and vicious. DM

Note: Passive/Aggressive was first described as ‘weak but vicious’ in the timeless Canadian comedy The Newsroom from 1996. You could do yourself a favour and watch it.