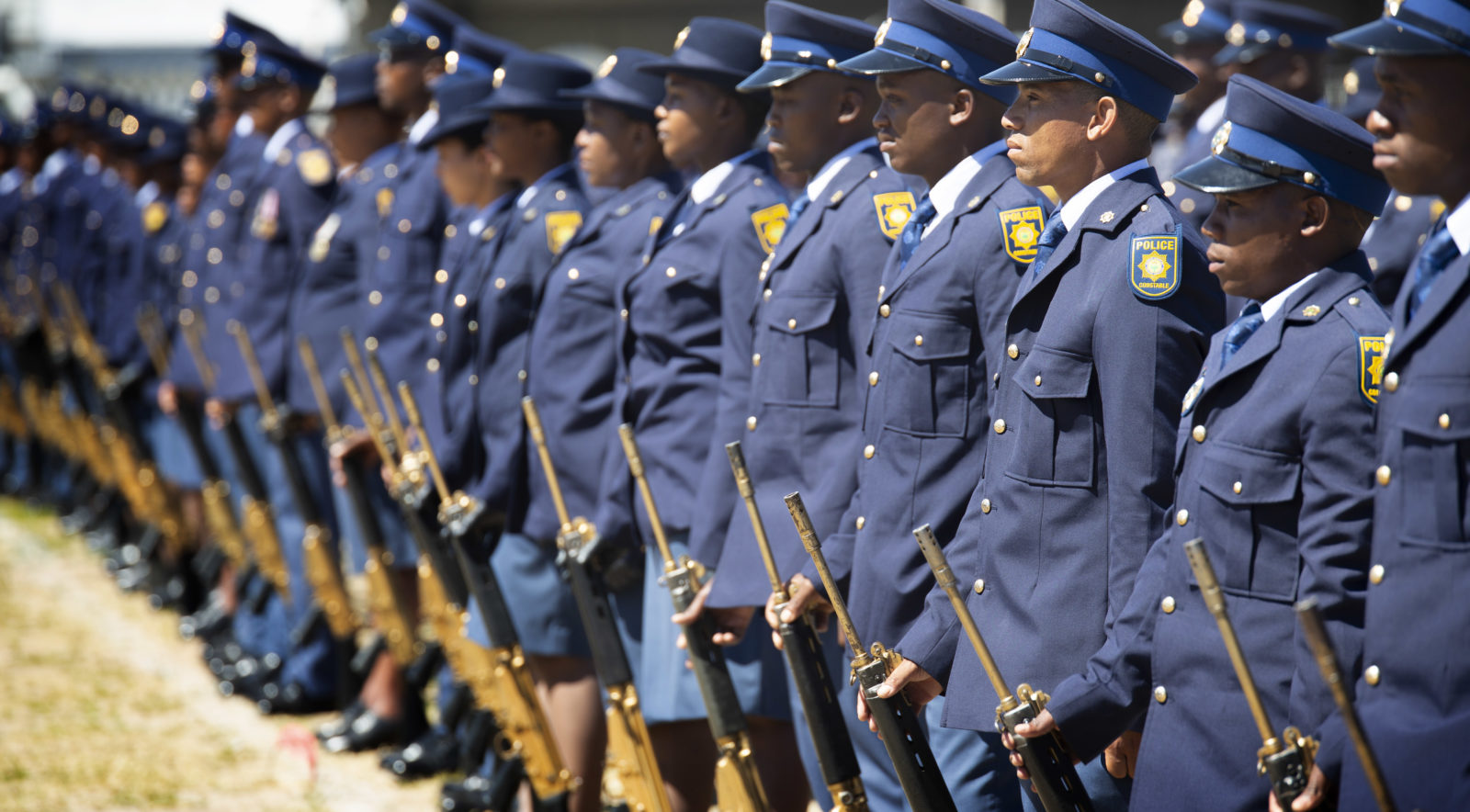 Members of the South African Police Services at the launch of the anti-gang unit in Haover Park, Cape Town, 2 November 2018. Photo: Leila Dougan

The much-lauded SAPS anti-gang unit deployed in affected communities in Cape Town could be shut down if a police trade union has its way. The move has angered residents, who say the unit is making a positive impact in curbing gangsterism.

The South African Police Union (Sapu)has gone to the Labour Court to reverse the deployment of the anti-gang unit in some of the crime-ridden areas of the Cape Flats, saying it had not been informed of the decision to establish such a unit.

In an urgent application filed at the Labour Court in Johannesburg, Sapu claims that the SAPS had established the unit without consulting the police union, as it had done with the establishment of the Railway Police and the public order policing protection unit.

“A unit is a formal establishment within SAPS and forms part of its organisational structure. It is a fixed establishment and its establishment must be preceded by proper work studies as it has been resourced by people, funds and logistics,” the urgent interdict reads.

In the interdict, acting general secretary of Sapu Tumelo Mogodiseng said he found out through the media that Police Minister Bheki Cele had launched the unit earlier this month.

Sapu effectively wants to interdict the police ministry and Police Commissioner General Khehla Sithole to stop the present implementation and any plans for future implementation of  the gang unit.

Sapu’s application has come under fire from residents in Hanover Park, one of seven areas the where the unit has been deployed.

SAPS has until Friday to indicate whether it intends opposing the application. Attempts for comment from the police on Thursday were unsuccessful.

Avril Andrews, from Moms Move for Justice based in Hanover Park, told Daily Maverick that even though the unit was new, “it’s the start of hope” for mothers affected by gangsterism. Andrews runs a non-profit organisation as a support group for mothers whose children have died in gang-related shootings.

Andrews said residents, especially mothers in Hanover Park, had reacted quite positively to the anti-gang unit. She said there was a case where a mother had told members of the unit that her son’s alleged killer was “walking up and down” in the community. Because of the intervention by the unit, that mother’s case was now “moving.”

“I can’t understand why they would want to close it,” said Andrews.

Reactions by politicians in the Western Cape to the Labour Court application has been one of blame.

“We are thus deeply concerned at reports that Sapu, with the collusion of the DA, intend to interdict the establishment of the anti-gang unit. This is clearly an attempt to undermine both the minister of police as well as the president.”

In the ANC’s lengthy statement, Rasool said “sadly the provincial and city government run by the Democratic Alliance have neither been fulsome in appreciating the AGU (anti-gang unit) nor forthcoming in unconditional support. That is why we are not surprised at the DA’s collusion with Sapu to now try and interdict the AGU.”

But the Western Cape DA described Rasool’s statement as “outrageous and misleading”.

DA provincial leader Bonginkosi Madikizela said on Wednesday that, “a few months before the elections it is perhaps expected of politicians to be economical with the truth, but Rasool and the ANC have stooped very low on such an important issue”.

Madikizela said the “deliberate manufacturing and spreading of false information which states that the South African Police Union and the DA interdicted the South African Police Service to stop the newly established anti-gang unit is a desperate attempt at propaganda by the ANC to score cheap political points using the vulnerability of our people.”

“I’m very disturbed they are considering politics over the people. What happened to the humanity? What will happen to the people?” asked Andrews. DM