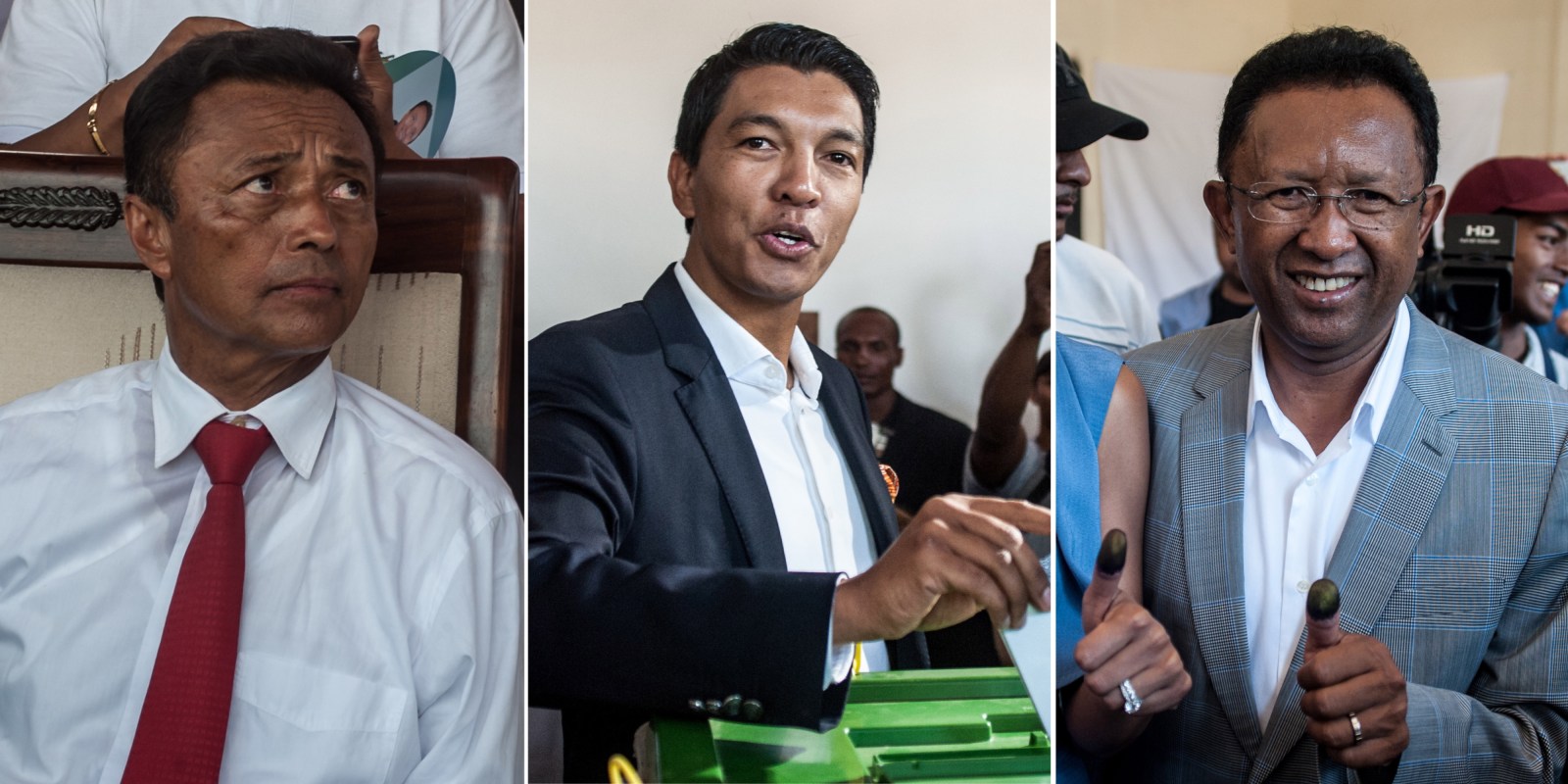 A threefold composite image made of file pictures shows (L-R) Marc Ravalomanana, Andry Rajoelina and Henry Rajaonarimampianina, the three ex-presidents and front-runners in the presidential elections in Antananarivo, Madagascar (issued 07 November 2018). Voters in Madagascar on 07 November headed to the polls to elect a new president in a bid to end a decade-long political crisis on the African island. A total of 36 candidates are vying for the office, but three candidates, all former presidents, were the favorites. EPA-EFE/HENITSOA RAFALIA

The results of the first round of Madagascar’s presidential elections are in and awaiting finalisation by the courts, but the two biggest candidates, Marc Ravalomanana and Andry Rajoelina, as well as the biggest loser, the most recent president Hery Rajaonarimampianina, are united in their complaints about the outcome.

A strange thing happened soon after the results of the Madagascar elections were announced on Saturday— all three of the biggest candidates, winners and losers alike, filed complaints. Former president Marc Ravalomanana, who had the second-most votes by only a few percentage points, with 35.29% of the vote, first filed 208 objections to the Constitutional High Court about the outcome, but on Wednesday withdrew them.

“He wants to bring peace,” a member of his campaign team said, “and does not want to be complicit in the possible cancellation of the elections.” One complaint might not be able to nullify an entire election, but there are fears that if too many candidates complain, Madagascar’s Independent National Electoral Commission (CENI) would cancel the entire election and call for a rerun.

As things stand, Ravalomanana and the former president who toppled him, initially by unconstitutional means in 2009, Andry Rajoelina, will be squaring off in the second round of the presidential elections, on December 19. All is therefore not lost for Ravalomanana at this point. The complaints, however, could be a strategy to iron out problems ahead of this second and final round. It’s a way of firing legal warning shots to opponents to let them know that election corruption would be picked up and reported, and that there could be consequences.

Rajoelina led the first round of Madagascar’s 7 November presidential elections with 39.19% of the vote. His representatives, however were not present when CENI announced the first-round results. Rajoelina’s representatives withdrew from CENI – all candidates are legally entitled to have representatives on the body – the week before because of, according to his campaign team, a lack of transparency by the electoral body.

His team accused CENI of not allowing him representation during all steps of the electoral process, as is their right. The withdrawal has prompted fears that Rajoelina would not accept the final results. However, Rajoelina welcomed the results, but this didn’t stop his team from lodging an application with the Constitutional High Court complaining about alleged fraud in the vote counting. Even though he came out tops, this could be a strategy on his part, too, of securing an outcome in his favour in the second round.

On Tuesday he tweeted a statement reflecting a speech he gave to a meeting of supporters the day before, saying his team asked the court for an audit of the CENI computer software, a re-count of the first round votes, as well as for light to be shed on the number of spoilt ballots, which his team said was up to 7.3% from 6.2% in previous elections. He said some of the votes considered spoilt were meant to be tallied with his votes, meaning he should have got over 40%. He also said the votes recorded on the results sheets did not add up to the number of votes cast.

“No one can divert the choice of the Malagasy and hinder their aspirations for a transparent, democratic election!” he tweeted. “This election is crucial to our homeland.” He tweeted that the “lack of professionalism of CENI is unacceptable and shameful”.

At the same time, however, Ravalomanana’s team has highlighted complaints against Rajoelina’s use of cash in the elections campaign. The amount of money spent by campaigners, with Rajoelina being the top spender, has been a cause of concern for observer teams from the EU as well as the Southern African Development Community and NGOs such as Transparency International.

Ravalomanana was toppled by Rajoelina in 2009 in an unconstitutional change of power described by the international community as a coup. Ravalomanana’s team pointed out allegations in the report by the European Union’s elections observer mission, noting that a distribution of money – a euphemism for vote-buying – was observed during the campaign. Fingers pointed especially to Rajoelina, and to payments made for rally attendance (ostensibly to cover transport costs), but Rajoelina’s team, in a letter copied to all the other observer teams, has accused some of the EU observers of bias.

Ravalomanana said the observers’ report “raises serious allegations of cheating, which cannot be ignored by CENI, the High Constitutional Court or the government”. He called for sanctions on “anyone caught cheating”, but said the elections should still go ahead.

“The Malagasy people have suffered too much since the 2009 coup d’etat and need the democratic opportunity to express their will in free and fair elections,” he said. He also vowed to restart the economy, which had a growth rate of 7% and higher under him, and which floundered after international sanctions following his ousting in 2009. His team has repeatedly painted him as the “good” over Rajoelina’s “evil”.

Madagascar’s most recent president, Hery Rajaonarimampianina, who is running for a second term, was third with 8.84% of the vote. Only six of the 36 candidates managed to get more than 1% of the vote. Rajaonarimampianina has also alleged electoral irregularities, claiming that the voter’s register used was invalid, and that there were delays in the opening of polls in some places, intimidation, and ballot-stuffing. Rajaonarimampianina’s complaint is the least surprising, because he’s out of the race altogether and it’s expected from candidates to object to an outcome that doesn’t favour them.

The EU observer chief Cristian Preda said soon after the vote, however, that there were not enough irregularities to affect the outcome of the election or to call it into question. “The disputes are part of the democratic game,” he said, “it’s normal, it’s human”.

Even though the first round of elections went off without any excessive violence, it is always the second round that was going to carry the most risk Rajaonarimampianina,for violence and cheating. The court is set to announce the final results next week.

Even with the challenges, it seems unlikely that one of the candidates will emerge with more than 50% of the vote, which means the top two will be in the run-off on December 19. If the current emotions are a measure, the real test for Madagascar’s democracy will be in the weeks running up to this date. DM