Blue Economy: Mariculture is not the panacea some belie...

Blue Economy: Mariculture is not the panacea some believe it to be 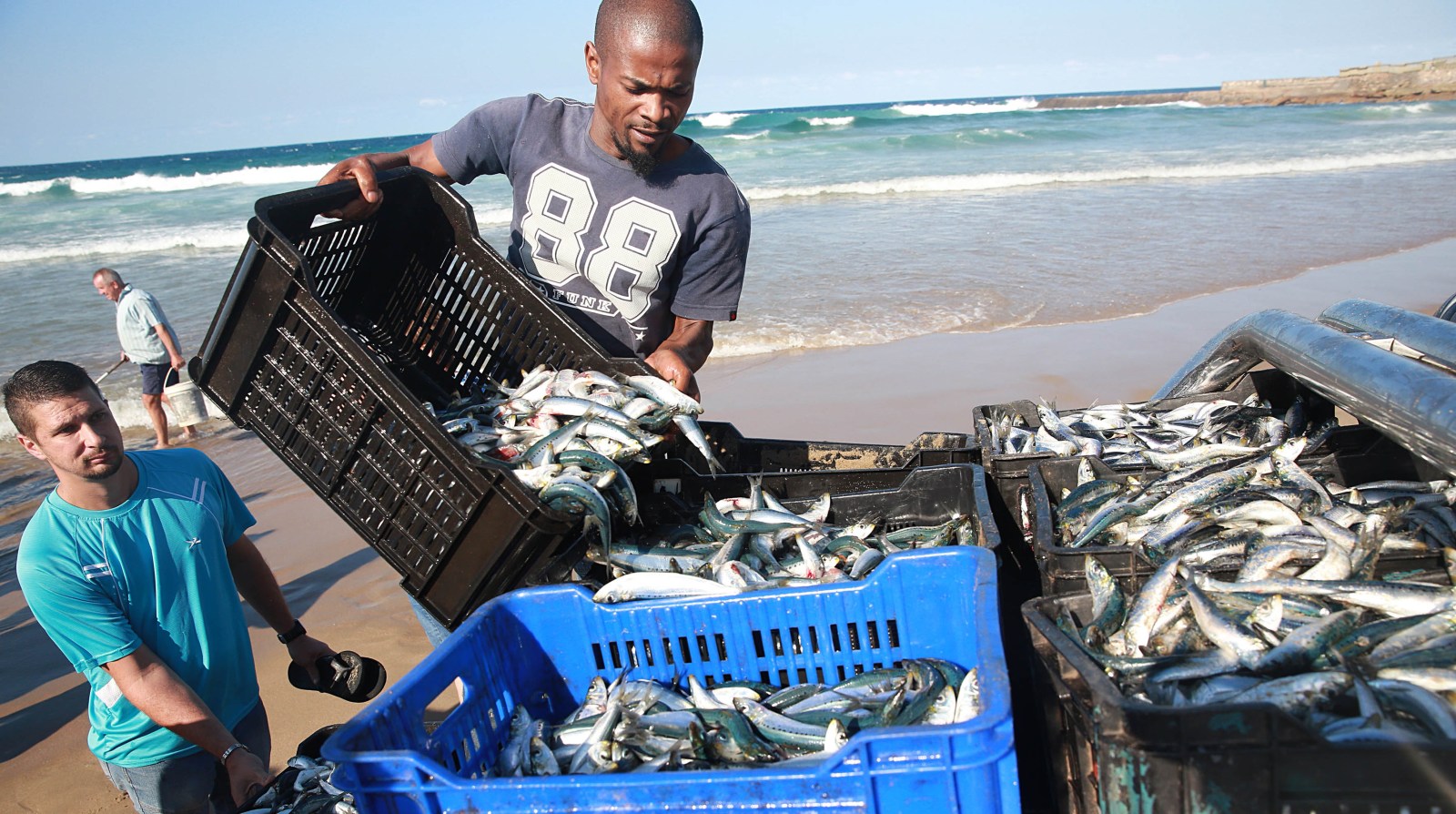 A man packages sardines at St Michael’s Beach on July 24, 2017 in KwaZulu-Natal, South Africa. The KZN South Coast was the scene of frenzied activity as people came out to scoop the tiny silver fish. (Photo by Gallo Images / The Times / Thuli Dlamini)

Plans to use fish farming as a way to lift the country out of the economic ghetto took a beating at a recent marine science session.

As a growing number of young South Africans swell the jobless queue, authorities have taken to talking with increasing fervour of the sea and the potential of the “Blue Economy”.

It’s one of those catchy phrases, a bit like “Radical Economic Transformation”, that can mean all things to all people but often adds up to little more than sound and fury.

It is bandied about in official documents or dropped into speeches by ministers and other heavy hitters to describe a multibillion-rand purse just waiting — the public are told — to be prised from the ocean’s clutches.

To make this happen, the government is backing Operation Phakisa, an elaborate planning framework.

In the protection stakes, South Africa has lagged on its international commitments to expand its network of Marine Protected Areas.

Until recently, only 0.4% of the South Africa’s exclusive economic zone was protected.

The issue came under scrutiny at a recent Ocean Stewards Science Session — an initiative launched by Wildlands and Grindrod Bank in recognition of threats facing the oceans.

Before the 2018 science session, Ocean Stewards played a leading role in launching the Only This Much campaign, which called for increased protection of the oceans.

Amid growing public pressure, the Cabinet finally announced, on 24 October, that it would expand protection to at least 5% of South Africa’s marine environment — a move welcomed as long overdue by marine conservationists.

But it was not only the need to protect oceans that came in for scrutiny at the session, hosted at the University of KwaZulu-Natal.

Ambitious plans to grow the aquaculture sector revenue from about R500-million (estimates vary) “to almost R1.4-billion in 2019” were also on the bill.

And it took a pounding from Larry Oellermann, the chief executive of the South African Association of Marine Biological Research.

Aquaculture is of course hardly new. It was familiar to the Romans and other ancients. Today it contributes almost half of the global fish supply, but less than 1% of South Africa’s seafood supply.

The government wants it to play a much bigger part in our economy, believing it offered great potential for rural development, especially for poor coastal communities.

In June 2018, Minister of Agriculture, Forestry and Fisheries Senzeni Zokwana said 35 aquaculture projects around the country had registered with Operation Phakisa and more were in the pipeline.

Since the launch of the initiative, more than R700-million had been invested in the aquaculture sector by the government and private sector, said Zokwana.

“Opportunities in the aquaculture sector are supporting rural economic development for both inland and coastal communities. It has started a cycle of economic activity, employment and consumer demand in these communities,” said Zokwana.

Oellermann, however, was not convinced.

As if sensing the anticipation from the young scientists at the session, Oellermann first set out his credentials: More than 30 years’ experience working in the aquaculture and marine aquaculture (mariculture) field in Namibia and South Africa; as a hatchery manager, researcher, consultant and adviser.

Next, Oellermann fired up a PowerPoint presentation with a series of graphs and tables, drawn from an economic and sectoral study.

It showed there had been limited growth in the marine industry for prawns, oysters and mussels over the past 15 years.

Then came the hook.

The idea that South Africa was going to become a world player in mariculture was far-fetched, said Oellermann.

“We are not naturally a mariculture country. We do not have fjords and the coastal environment to do large-scale mariculture,” he explained.

He said aside from Saldanha Bay, which has a big calm bay conducive for mariculture, the industry in South Africa was largely land-based — and hugely expensive to set up.

“My point about mariculture in South Africa is that, because of the nature of our coastline, it will mostly have to be undertaken in specially created facilities onshore,” said Oellermann.

“Our sea is just too rough, and the coastline too unprotected, for us to be able to farm much in the sea. As soon as you have to pump seawater onto the shore, and build special systems on the shore to keep your animals alive, the operation gets costly, not just in infrastructure terms, but also in terms of meeting the environmental requirements and the regulations involved,” said Oellermann.

He said it took on average of R120-million to start an abalone farm, and typically took six years to reach break-even point.

Oellermann said while the abalone industry generated a blockbuster R600-million in foreign income in 2017, with some farms doubling and even tripling production over the past few years, the overall number of aquaculture enterprises (marine and freshwater) had been gradually declining.

Then Oellermann landed his sucker-punch.

“Yes, it’s a fantastic industry and will be an important component of South Africa’s Blue Economy in the future, but let’s not hang the wrong bells on it. Mariculture is not a panacea to South Africa’s economic problems and unemployment,” said Oellermann.

“But unfortunately, there is this belief going around South Africa at the moment that mariculture will be the solution to providing cheap protein to feed our people, and plenty of jobs.

“This is just not true; onshore mariculture is more industrial than agricultural, and tends to be work intensive rather than extensive. But this — and this is a big but — doesn’t mean mariculture has no value in South Africa.

“What we need to do is see mariculture for what it is. It is expensive to get into, which limits ownership. It produces a low output of high-value (expensive) product, so will not feed the poor; and it doesn’t need a large staff complement, so won’t really alleviate the unemployment problem.”

While “phakisa” means “hurry up” in Sesotho, what Oellermann in a sense was saying to promoters of a big Blue Economy is: Hang on a minute. Let’s think carefully about this. Let’s be realistic.

Tapping the ocean’s economic potential is going to be a tough fight. DM