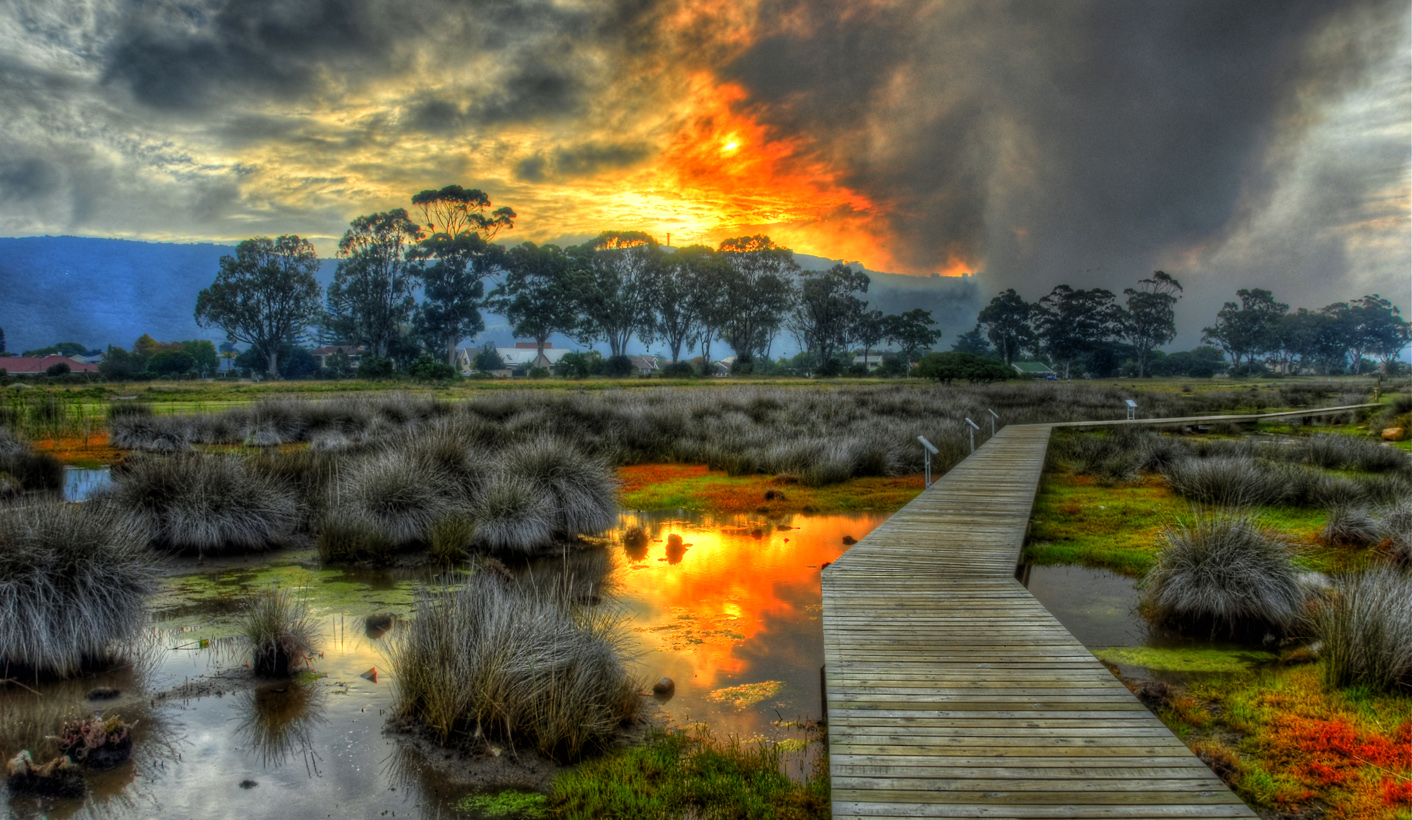 As global warming pushes storms and high pressure systems to the south, more greenhouse gases are released from the deep ocean while less winter rain falls on the Cape. For Pedro Monteiro, one of South Africa’s leading oceanographers, these phenomena were brought home in a drastic way during the Garden Route wildfires.

“It is hard to be on a ship in the Southern Ocean in winter.”

A sentence with the ring of the elegiac to it, like the final line in a sea saga whose hero, after having survived many ordeals — storms, frostbite, and so on — arrives at the only conclusion his overwhelmed mind can still handle. A statement of fact, old as time itself, about man and the elements.

“And yet winter, from a carbon-climate perspective, is arguably the most important season.”

Not poetry, then, but science. And the protagonist is no ancient mariner, he is Dr Pedro Monteiro, chief oceanographer at the Council for Scientific and Industrial Research, whose contributions to the field have included leading the first global deployments of robotics-based carbon dioxide (CO2 ) observations in the Southern Ocean. According to Monteiro, robotics is now doing for the world’s oceans what satellites have done in the past half-century for planetary observation. Technology has altered the homo sapiens-versus-wave-tossed sea equation, as immortalised by storytellers from Homer to Coleridge, and data that was impossible to gather a decade ago is now telling us what we could never have guessed.

For instance, while we have long known that the oceans are the world’s largest “carbon reservoir”, holding more than 95% of the planet’s C02, what we are only beginning to measure is how much of that stored gas is likely to remain in the depths.

This is important for the following reason: at some point, if the rate of anthropogenic carbon emissions continues on its current apocalyptic track, the natural feedback loops between the oceanic carbon cycle and the climate will unravel and warp, accelerating heating and devastation on levels that not even the Intergovernmental Panel on Climate Change is comfortable talking about.

As a contributing author on a pair of IPCC reports yet to be released, and therefore a signatory to the organisation’s stringent non-disclosure terms, Monteiro was understandably restrained in his explanation of the phenomenon.

“It’s important to grasp,” he informed Daily Maverick, “that there’s not only something called anthropogenic C02, there’s also natural C02. The thing to keep in mind is that the ocean stores 50 times more C02 than the atmosphere, and this is mainly stored at ocean depths below a 1,000m. The only part of the ocean where those deep waters come to the surface is the Southern Ocean. What we’re looking at is a scenario where, as the storms move southwards because of global warming, there’s an increase in the rate at which the natural C02 is brought to the surface.

“So here we have a situation where we are starting to impact the way the natural system works. And that’s the real concern. Our research is really focused on understanding these feedbacks.”

In other words, the core of the problem is as terrifying as it is simple. As humans with agency, according to Monteiro, we can reduce emissions, at least in theory. But once the natural system starts to change, it takes hundreds of thousands of years for it to readjust. Meeting the 1.5°C global warming target, the upper limit suggested by the IPCC, could therefore become the most important milestone our species has ever reached.

“We do not want to allow the natural system to change in a way that we lose control of the rate at which C02 and heat accumulate in the atmosphere,” said Monteiro.

“Which could happen if we go above 1.5°C. So a big part of our work is about providing sufficient understanding of how the natural feedbacks function, because these systems are big enough, basically, to upset our mitigations.”

By “our work”, Monteiro was not referring to the IPCC but to South Africa’s own Southern Ocean Carbon & Climate Observatory, based at the CSIR and staffed by eight full-time scientists and 12 post-doc and PhD students.

By “mitigations”, on the other hand, he was referring to the IPCC — specifically, the bits in October’s world-shaking special report that spoke about the urgency of an accelerated transition to renewables in the energy sector, drastic reductions in nitrous oxide and methane emissions in the agriculture and waste sectors, and transformation of land and urban planning practices wherever there is modern human civilisation.

Again, if the ocean’s ancient carbon feedback cycles are knocked out of whack before these mitigations take effect — and that’s assuming we can muster the collective will to get there in the first place, an if so big some of our foremost climate scientists have already given up hope — our efforts will have been for naught.

And yet for Monteiro, who recently had a personal encounter with the havoc that unhinged weather patterns can wreak, none of this is an excuse for fatalism.

On Sunday 21 October, the hamlet of Vermaaklikheid was overcome by the same wildfire that visited extensive damage upon forests, farmlands and properties throughout the Southern Cape. The buildings on Monteiro’s land were saved by helicopter action and what he termed a “fantastic community effort”, but the farm itself was 90% burnt.

“The fire really brought home, so to speak, the experience of being in the front line of a changing climate,” he said.

As for the causes of the fire, Monteiro’s assessment was that they were three-fold, with the first and last directly related to his regional (as opposed to global) work at CSIR. Putting aside the prevalence of alien vegetation in the Southern Cape, which tends to burn very hot, the low winter rainfall over the last few years, the heatwave conditions that enhanced the dryness already present from the multi-year drought, and the abnormally strong winds all combined to render conditions ideal for such an outcome.

“One of the elements that’s linking climate change to shifting weather patterns in the Southern Cape,” said Monteiro, “is that the intensification of the South Atlantic High is not only increasing the pressure gradient between it and the low pressure over land, which drives what we know as the “south-easter”, but it’s now also starting to push the high pressure to ridge around the southern tip of Africa. And that increases the strength of the wind and its easterly component, which is also what’s drying the wind.”

The wildfire, in layman’s terms, was the perfect storm. A three-year-below-normal winter rainfall period, a mean temperature for the month of October 2018 that was 4°C to 6°C higher than the 30-year mean for the region, and exceptionally strong winds for a 10-day stretch.

According to Monteiro, these conditions are likely to become more prevalent. What they demonstrate is that weather systems don’t function in isolation. With global warming pushing cold fronts away from Cape Town, and with Cape Town at the equivalent latitude of Casablanca in Morocco, the danger is that even our southernmost coast has a high propensity for aridity. As Daily Maverick pointed out in a recent interview with Monteiro’s IPCC and CSIR colleague Francois Engelbrecht, when a hot and dry climate gets hotter and drier it leaves very little room for manoeuvre.

So what to do?

It’s a question that’s been occupying more international conferences and media real estate than ever before: While the current UN biodiversity meeting in Egypt grapples with the intractable intersection between the demand for biofuels and the dearth of available land for bioenergy crops, Extinction Rebellion in the UK is filling column inches with its combustible attacks on the Tory government (more than 85 were arrested on the weekend for shutting down London’s bridges).

What this new brand of climate activist seems to get is the urgency in the message of scientists like Monteiro, particularly those areas of emerging research that focus on feedback loops. Writing about the London protests, environmental columnist George Monbiot could well have been paraphrasing Monteiro:

“Public figures talk and act as if environmental change will be linear and gradual. But the Earth’s systems are highly complex, and complex systems do not respond to pressure in linear ways. When these systems interact (because the world’s atmosphere, oceans, land surface and life forms do not sit placidly within the boxes that make study more convenient), their reactions to change become highly unpredictable. Small perturbations can ramify wildly. Tipping points are likely to remain invisible until we have passed them. We could see changes of state so abrupt and profound that no continuity can be safely assumed.”

As for Monteiro himself, comfort is found in the fact that South Africa is delivering a great deal of clarity on these nascent phenomena.

“Our climate science community punches above its weight globally,” he said. DM

Jessica Bezuidenhout for Scorpio • 24 hours ago