With Mandela on his shoulder, Ramaphosa calls on European Parliament to ‘stand by South Africa’ 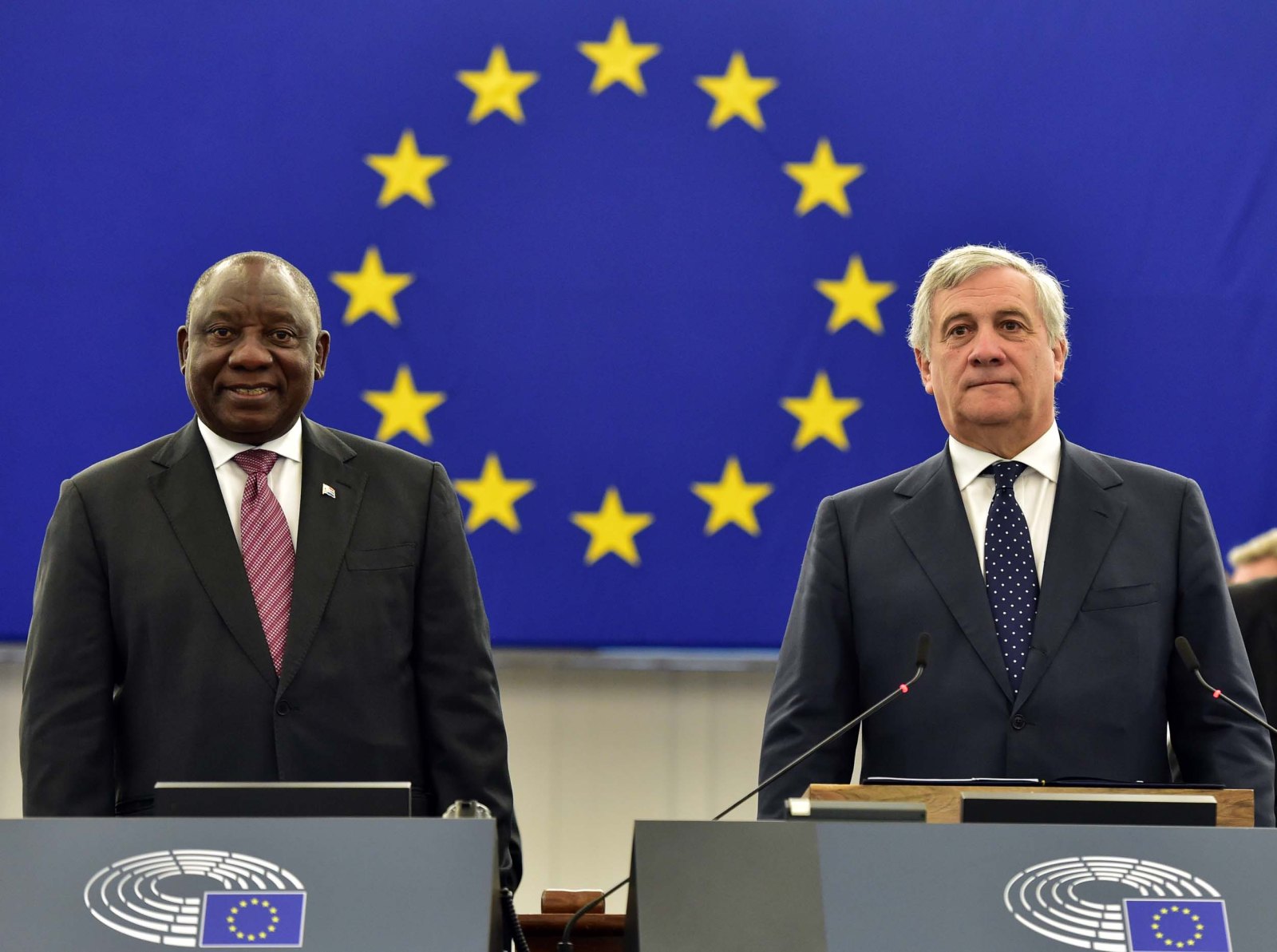 President Cyril Ramaphosa and his investment-seeking charm sped through the European Parliament in Strasbourg faster than a TGV high-speed train on Wednesday, where his call for a partnership characterised by economic diplomacy traded heavily on the Mandela legacy.

On the ground floor of the Louise Weiss Building that constitutes the European Parliament’s ambitious headquarters in Strasbourg, at the end of the red carpet-lined corridor that is the press area, is a board. It displays a map of the world dotted with pictures of recipients of the institution’s Sakhorov Prize for “freedom of thought”.

In 1988 South Africa had a turn when the prize was awarded to Nelson Mandela, a political prisoner at the time. In 2011, other recipients more to the north of Africa received the award for their role in the Arab Spring.

President Cyril Ramaphosa made ample reference to Mandela when he stood in front of the 785 seats in the vast, semi-circular parliamentary chamber, enclosed with a large wooden shell like an egg, inside one of the biggest buildings in town. The building is supposed to be transparent and airy, but at the same time it’s complicated and very difficult to navigate.

About two-third of the seats were empty, Brussels being the more popular choice of venue for European officials – and also Ramaphosa’s next stop (after meeting Belgium’s King Phillipe).

It’s his first visit as president to the European Parliament chamber, and the only mention made of his immediate predecessor was to say that South Africa was putting this rather “difficult period” behind it.

Former president Jacob Zuma, during his visit to the European Parliament in 2010, made headlines by calling on European countries to call off sanctions against Zimbabwe.

Ramaphosa, who looked very much at home, told MEPs the democratic values of Olof Palme, assassinated Swedish Prime Minister, a “great statesman, and friend of the anti-apartheid cause”, resonated with former president Nelson Mandela’s “vision of a global community of nations that affirms the centrality of human dignity”.

When Mandela addressed the European Parliament in 1990, four months after his release, he thanked the leaders and people of Europe for their contribution to the liberation of South Africa, Ramaphosa said. Going off-script, he said that during the dark days of apartheid, Mandela called on the nations of Europe to continue standing by South Africa to rebuild it post-apartheid.

“We are here to confirm that indeed the nations of Europe answered the call of Mandela with conviction and generosity,” Ramaphosa said. He, too, asked the nations of Europe to “continue to stand by South Africa as we sought to rebuild our country” so that, eventually “we can enjoy the progress that you as Europeans have achieved”.

Ramaphosa’s visit to Europe came three days after a historic centenary commemoration of Armistice Day in Paris, attended by about 60 world leaders (including a number of African colleagues like Senegal’s Macky Sall, Nigeria’s Muhammadu Buhari and Kenya’s Uhuru Kenyatta), and just one day after the end of French President Emmanuel Macron’s Paris Peace Summit, a club in support of multilateralism and all things patriotic. Ramaphosa didn’t attend these events, perhaps because he had bigger things in the shape of former minister Malusi Gigaba to deal with.

His sentiments, however, echoed those expressed by Macron and German Chancellor Angela Merkel. Ramaphosa denounced “the resurgence of racism and xenophobia cloaked in the mantle of nationalism” (of United States President Donald Trump’s “Make America Great Again” brand).

“Unilateralism is on the rise and threatens to undermine our collective commitment to democratic values and respect for human rights,” he said.

“Now, more than ever, we turn to our great leaders for strength and inspiration as we seek to resolve the most pressing challenges of the present.”

Ramaphosa said Mandela would have applauded the European Union’s partnership with the African Union to establish peace on the continent. Lasting peace, however, depended on economic development.

“Without opportunity, without investment, without thriving economies that enable us all to enjoy our place in the sun, we cannot hope to have political and social stability on the African continent,” Ramaphosa said, welcoming the European Union’s development initiatives such as the European External Investment Plan, the Economic Partnership Agreement and the new Africa-European Alliance for Sustainable Investment and Jobs. These initiatives should also support the establishment of the Africa Continental Free Trade Area and Africa’s overall industrialisation, infrastructure development and economic transformation, he said.

“Right now our country is in the process of reforming and transforming itself,” he said.

Nothing about land was included in his prepared speech, but perhaps a journalist’s barbed question on the issue at a press brief right before his address (she said Ramaphosa was betraying Mandela’s legacy by embarking on a “Marxist” redistribution programme on land) inspired him to add five minutes off the cuff.

He said South Africa was now in the stage where “we are engaging in an over-arching dialogue among the people of South Africa, those who own land and those who do not, to see how this important resource can be utilised to develop our country”.

He promised to resolve the problem “on an inclusive basis” and with mutual respect, “making sure, like we did when we resolved the apartheid problem, that we resolve it with a view to rebuild a nation from the ashes of apartheid. This we shall do because that is what Nelson Mandela taught us,” he said to applause by MEPs.

European Parliament President Antonio Tajani during the press briefing was much, much briefer than Ramaphosa about the land issue, either because he didn’t have much to say or because Ramaphosa’s long explanation to the journalist made them run late.

“It must be a legal and democratically transparent process,” Tajani said, “that does not affect economic growth, agricultural production and food security.”

He said Ramaphosa was “convincing” and that his land reform comments were good.

“You can safely say [his appeal was] very well across the political spectrum. He had a follow-up afterwards with socialist groups, but also liberals.”

On Twitter, Sinn Fein MEP Martina Anderson posted a selfie with Ramaphosa (who was among those who exported South Africa’s reconciliation to the conflict in Northern Ireland), and Tajani and various other European officials tweeted official pictures.

Ramaphosa seems to have a cross-spectrum appeal, much like Mandela. He could, however, run the risk of disappointing should he become everything to everybody. DM