Back to the future in Madagascar 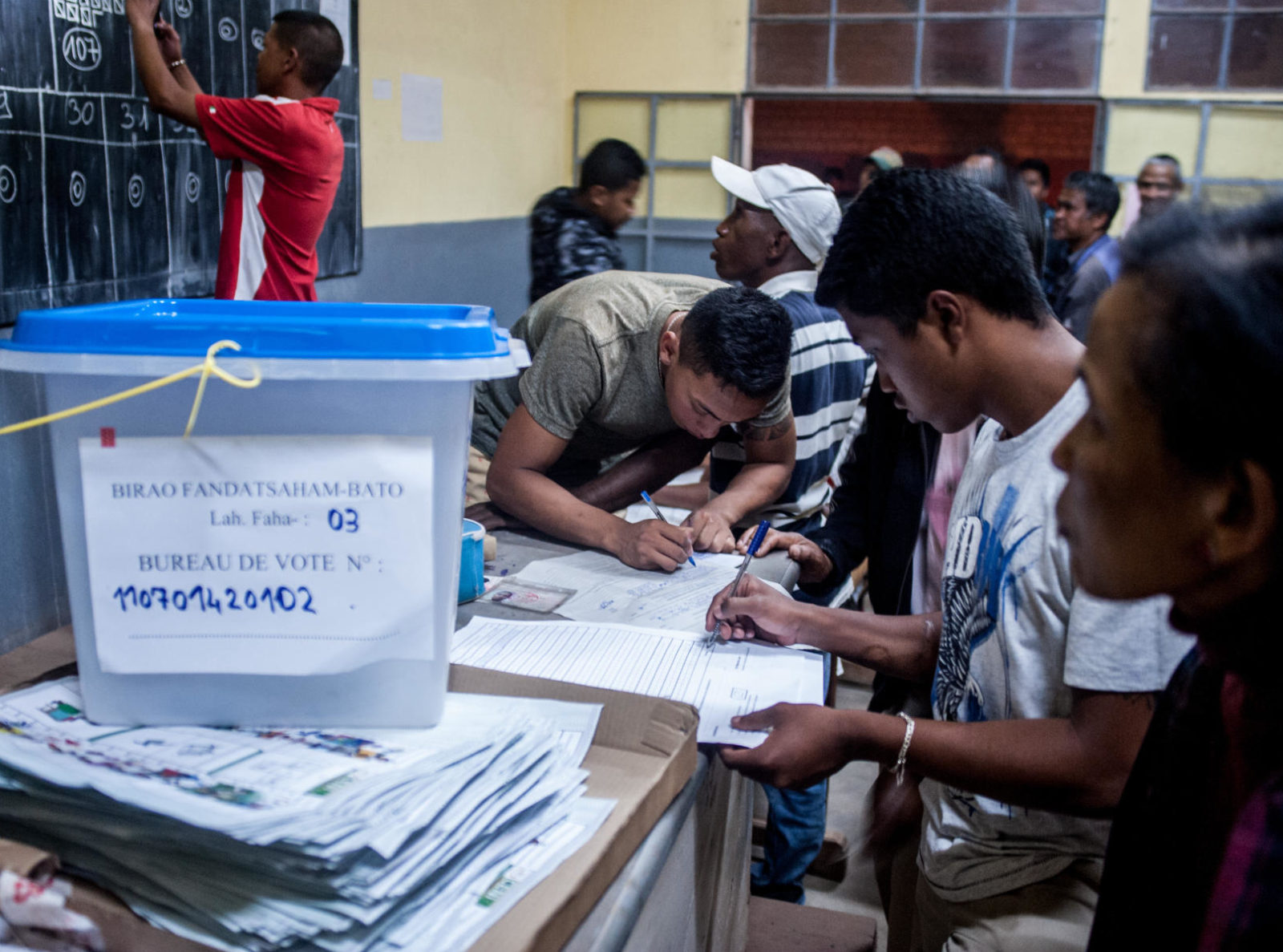 Vote counting takes place after the last votes have been cast during the presidential elections in the capital Antananarivo, Madagascar, 07 November 2018. EPA-EFE/HENITSOA RAFALIA

The international community might need to intervene once again after the run-off elections on 19 December. By Liesl Louw-Vaudran

Whoever becomes president in Madagascar is likely to have an axe to grind. Both frontrunners, who will be facing off in a second round next month, are former presidents. Both were excluded from participating in the 2013 elections through intervention by the international community. This was seen by mediators of the Southern African Development Community (SADC) as a compromise solution following the 2009 coup.

According to the latest figures, after 57% of the votes have been counted, Andry Rajoelina got 38.95% in last Wednesday’s poll. His main rival, Marc Ravalomanana, had a tally of 36.8% and Hery Rajaonarimampianina, who served as president until September this year, secured only 7.7%.

According to the National Independent Electoral Commission, voter turnout was 57%. This is close to the 61% in the first round of presidential elections in 2013. Save any major last-minute surprises, a second round between Rajoelina, who was president from 2009-13, and Ravalomanana, who lead the country from 2002-9, will take place on 19 December.

Rajoelina, a former disc jockey, deposed Ravalomanana in a coup in March 2009. Ravalomanana fled to South Africa and fought for years to get himself reinstated as Madagascar’s legitimate leader.

SADC and other actors led negotiations to get Ravalomanana back to Madagascar, where he had been condemned for crimes emanating from the 2009 stand-off with Rajoelina. A compromise was reached and SADC convinced the Malagasy to have a new election without Rajoelina or Ravalomanana. The option to exclude both main players became known as the “ni-ni” option: not Rajoelina, not Ravalomanana.

In return for not running, Rajoelina and Ravalomanana would have, in theory, obtained amnesty for everything that happened during their turbulent regime change in 2009. The agreement was however never fully implemented, and many in Madagascar felt the ni-ni option was undemocratic.

Rajaonarimampianina, a relatively unknown finance minister, was elected president in December 2013, supported by Rajoelina. Many expected him to dance to the former DJ’s tune, but he was more or less his own man as president, albeit not very successfully. He also didn’t get much international support – SADC having moved on. to other things.

The results of last week’s poll show that Rajoelina and Ravalomanana remain by far the most popular politicians in the country – and if not popular, the ones with the most money to campaign and the strongest campaign networks countrywide. The huge amounts spent by both on their campaigns have shocked many observers, especially given Madagascar’s dire poverty.

Rumours abound about foreign governments supporting some of the candidates, but there appears to be no enforceable ceiling on what candidates are allowed to spend during their campaigns in Madagascar.

Does this mean the SADC plan to stabilise politics in Madagascar following years of upheaval was a failure? If the same actors simply step back into the ring and shove aside all others, is the country back to square one?

SADC got involved at a time when there was a stalemate in Madagascar. Former Mozambican president Joaquim Chissano led shuttle diplomacy for months to come up with a solution. The African Union (AU), the United Nations, the International Organisation of the Francophonie, France, South Africa and others played a role in the run-up to the 2013 poll.

The fact that elections did take place that year meant Madagascar could fully integrate into the international community through the lifting of AU sanctions in January 2014. A roadmap that included reconciliation between the parties was also part of the SADC plan. Although a reconciliation commission is in place, little progress has been made.

Earlier this year Rajaonarimampianina wanted to adjust the electoral laws in a bid to get Ravalomanana and Rajoelina excluded from last week’s poll. The same actors, this time with South Africa’s President Cyril Ramaphosa as SADC chairperson and AU special envoy Ramtane Lamamra, intervened to stabilise the situation and pave the way for inclusive elections.

The 7 November elections were said to be largely free and fair, despite complaints about the voters roll and the lack of transparency concerning campaign financing.

The SADC election observer mission led by Zambia’s foreign minister Joseph Malanji said the elections were peaceful, orderly and in line with the country’s laws. European Union observers said the few “minor irregularities” wouldn’t influence the outcome of the poll.

Already though, there are rumblings of discontent and accusations of election rigging, especially from the Ravolamanana camp, as there often is during such a close race. Madagascar’s politics is fickle and dominated by a few relatively young politicians who are bound to be on the scene for some time.

For Rajoelina and Ravalomanana, much is at stake. Rajoelina has to improve his reputation of being merely a young DJ who stole the presidency from his predecessor. Some say he is bitter about the fact that Rajaonarimampianina didn’t toe the line after receiving Rajoelina’s backing for the presidency.

Ravalomanana on the other hand feels he was cheated out of another term at the helm of Madagascar – first through the coup and then through the decision not to let him run in 2013. He is also a wealthy businessman who wants to recover what he lost while in exile and under house arrest after his rather mysterious return to the country in 2014.

The role of SADC in the 2009-13 transition in Madagascar was clearly controversial. Yet the good offices of the region and the continent might be needed again to make sure peace prevails once the results of the second round are announced, regardless of who wins. DM

Elon Musk has specifically written into their spacesuit designers' contract that they "must look badass".