From #WhatwouldMagufuliDo to #Magufoolishness: What will John Magufuli do next? 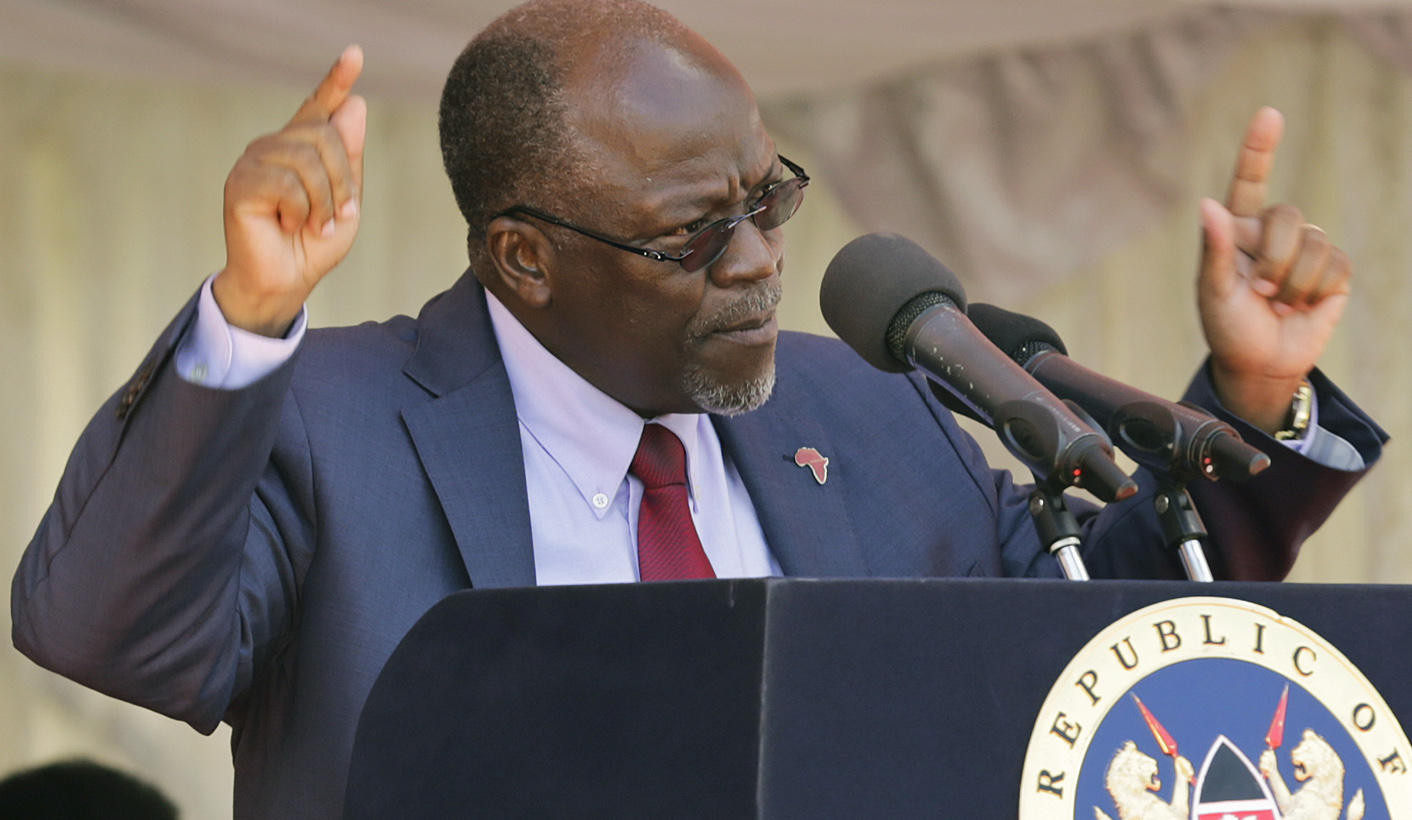 Tanzania’s John Magufuli has gone the way of other ‘new’ African presidents who once raised great hope, like Uganda’s Yoweri Museveni or Rwanda’s Paul Kagame. And that’s the way of authoritarianism. Magufuli is still bulldozing through red tape and graft. But he is just as aggressively bulldozing through political freedoms and human rights.

Tanzanian President John Magufuli took office three years ago, full of promise. Known as the bulldozer in his previous life as minister of works, transport, and communication — because of his habit of bludgeoning through bureaucracy and pole-axing corruption to get things done – he brought the same blunt style to the presidency.

Magufuli did things like walking into public hospitals to discover for himself whether they were delivering the public services they promised. Within days of becoming president he discovered that Dar es Salaam’s main hospital lacked beds. So he cancelled the upcoming independence celebrations and diverted the money to buying more beds.

This sort of no-nonsense approach to governance soon spawned its own hashtag; #WhatwouldMagufuliDo. All over the continent, envious non-Tanzanians tweeted about all the good things Magufuli might do if he applied himself to their problems.

Three years later, most of that euphoria looks with hindsight like #Magufoolishness. The original hashtag has taken on a deeply ironic flavour as former fans wonder with growing concern what the next thing Magufuli might do to stamp out freedom. He has gone the way of other “new” African presidents who once raised great hope, like Uganda’s Yoweri Museveni or Rwanda’s Paul Kagame. And that’s the way of authoritarianism. Magufuli is still bulldozing through red tape and graft. But he is just as aggressively bulldozing through political freedoms and human rights.

This week South African journalist and media advocate Angela Quintal and her Kenyan journalist colleague Muthoki Mumo got a hint of the darker side of the Magufuli administration when they were arrested at their hotel in Dar es Salaam by Tanzanian immigration officials and taken off to be interrogated for some five hours. Eventually, after the intervention of South Africa’s High Commissioner Thami Mseleku, they were released and later given back their confiscated passports. Both of them got out of the country as quickly as possible.

An immigration department spokesman said once the department had “educated” the two about their error, they were free to go. Clearly though, the considerable clout of Pretoria had been decisive. The ties between the ruling ANC and Tanzania’s ruling Chama cha Mapinduzi (CCM) go back into the Struggle days when the ANC had training camps in Tanzania. The two parties are still members of the so-called “FLM” – the former liberation movements, now in government, who meet every year for a huddle to share ideas on how to stay in power.

Whether or not Quintal and Mumo infringed Tanzania’s immigration rules is unclear. But one cannot escape the suspicion that the real reason the authorities picked them up was that they were evidently investigating the mysterious disappearance of Tanzanian investigative journalist Azory Gwanda almost a year ago, on 21 November 2017. He had been investigating political murders in Kibiti, about 136 kms southwest of Dar es Salaam, when he went off on a trip and never came back. Nothing has been heard of him since.

Quintal, former editor of the Mail & Guardian, Mercury and Witness, is now Africa programme director and Mumo is sub-Saharan Africa representative at the New York-based Committee to Protect Journalists (CPJ). Their job, as their organisation’s name makes very clear, is to protect journalists. And journalists are undoubtedly under growing threat in Tanzania. Even before Magufuli took office, the government had been pretty cavalier about shutting down newspapers which offended then President Jakaya Kikwete.

Under Magufuli, freedom of expression and of the press have become much more constrained.

Freedom House recently noted that Magufuli now “presides over a government responsible for arrests of opposition politicians, abductions of activists and journalists, and rising levels of media censorship”.

The US-based institution, which monitors freedom in all countries around the world, speculated that with the restrictive measures he has already adopted, “Magufuli may be testing the waters before instituting more systematic repression.”

Freedom House cited several measures which have recently been introduced to curtail freedom of expression and media. One is the Cybercimes Act, which criminalised a range of online activities – and under which several people have since been arrested under the act for offences such as “insulting” the president in WhatsApp messages or Facebook posts.

“In just the last year, the Tanzanian government has used the law to ban the publication of four newspapers,” Freedom House said.

Recently introduced online regulations require bloggers to pay $480 for a three-year licence and a $440 annual fee, and to report the anticipated content of their blogs.

It said older laws were also being enforced more aggressively in Tanzania. In January 2018, five television stations were found guilty and fined for contravening the 2005 Broadcasting Services (Content) Regulations.

The result of the crackdown has been widespread self-censorship, Freedom House said. This was apparent “in the conspicuous lack of local coverage of scores of bodies washing up on the beaches of Dar es Salaam, the reported disappearance of over a thousand children in the Kibiti area, and the extrajudicial killings of young men by watu wasiojulikana (unknown persons).”

Freedom House also mentioned the disappearance of Azory Gwanda as a case journalists were now too scared to probe thoroughly.

However, Bahame Nyanduga, chair of Human Rights and Good Governance, was recently quoted in the local press about Gwanda’s disappearance.

“There have been so many incidents of this kind that they are becoming normal. So, we request the Police Force to speed up investigations,” he said.

In August 2018, Quintal and Mumo’s organisation, the CPJ, joined 29 other civil society groups around the world, including South Africa, in writing to the member and observer states of the United Nations Human Rights Council “urging them to address the deteriorating situation for human rights, including freedom of the press, in Tanzania.

“Since 2015, journalists and bloggers in Tanzania, as well as human rights defenders and members of the political opposition, have been targeted with draconian legislation and both legal and extra-legal measures by the government. Under these conditions, freedoms of expression, peaceful assembly, and association have been deeply eroded.”

The statement from the human rights defenders cited six laws enacted since 2015 which it said had contributed to “a rapid shrinking of its civic space over the last three years”.

The Electronic and Postal Communications Act (2010) and Online Content Regulations (2018), the Statistics Act (2015), the Cybercrimes Act (2015), the Media Services Act (2016), and the Access to Information Act (2016) “provide authorities with overbroad powers to restrict, with little judicial oversight and inadequate legal safeguards, citizens’ exercise of their human rights”.

Human rights defenders, NGO members, journalists, bloggers and other independent or critical voices had been charged with vaguely-worded offences, they said.

“Political opposition has also come under attack, with new restrictions, such as a blanket ban on political rallies, significantly hampering its ability to function effectively and promote its platform.

“Since the start of 2018, political opposition members and parliamentarians have been violently attacked and even killed, including Mr Godfrey Luena, an MP for main opposition party Chama Cha Demokrasia Na Maendeleo (CHADEMA), and Mr Daniel John, a CHADEMA official in Dar es Salaam.

“Civil society actors have also suffered harassment, stigmatisation and unlawful restrictions to their rights to express themselves, peacefully assemble, and associate.

“A number of independent media outlets have been banned, suspended or sentenced to hefty fines, resulting from, and in increased, censorship and self-censorship.

“Between June and October 2017, the Tanzanian Government banned four newspapers for periods of between 90 days and 24 months on specious allegations.

“In January 2018, the Tanzania Communications Regulatory Authority imposed hefty fines on five television stations, accusing them of unbalanced reporting in connection to their coverage of allegations of human rights abuses.

“Freedom of expression online has been threatened by March 2018 regulations that force bloggers to comply with draconian regulations and pay high registration fees.”

The appeal to the members of the UN Human Rights Council had no visible effect on the Magufuli administration’s clampdown on freedom of the media or civil society in general.

The African Editors Forum (TAEF) condemned, in the strongest possible terms, the detention by the Tanzanian authorities of Quintal and Mumo. TAEF chairperson Jovial Rantao called it “intimidation and an assault on media freedom”.

International Relations and Co-operation Minister Lindiwe Sisulu said she had asked her High Commissioner in Tanzania, Mseleku, to report to her fully on the incident.

It’s probable, though, given the warm fraternal relations between the ANC and CCM, that Pretoria will accept Tanzania’s explanation that it acted purely because Quintal and Mumo had infringed visa regulations.

It’s unlikely that South Africa would condemn their detention as an attack on the media. So Magufuli will continue to stomp on the media, unrestrained.

#WhatMightMagufuliDoNext is now the question Tanzanians and many others are asking themselves. DM