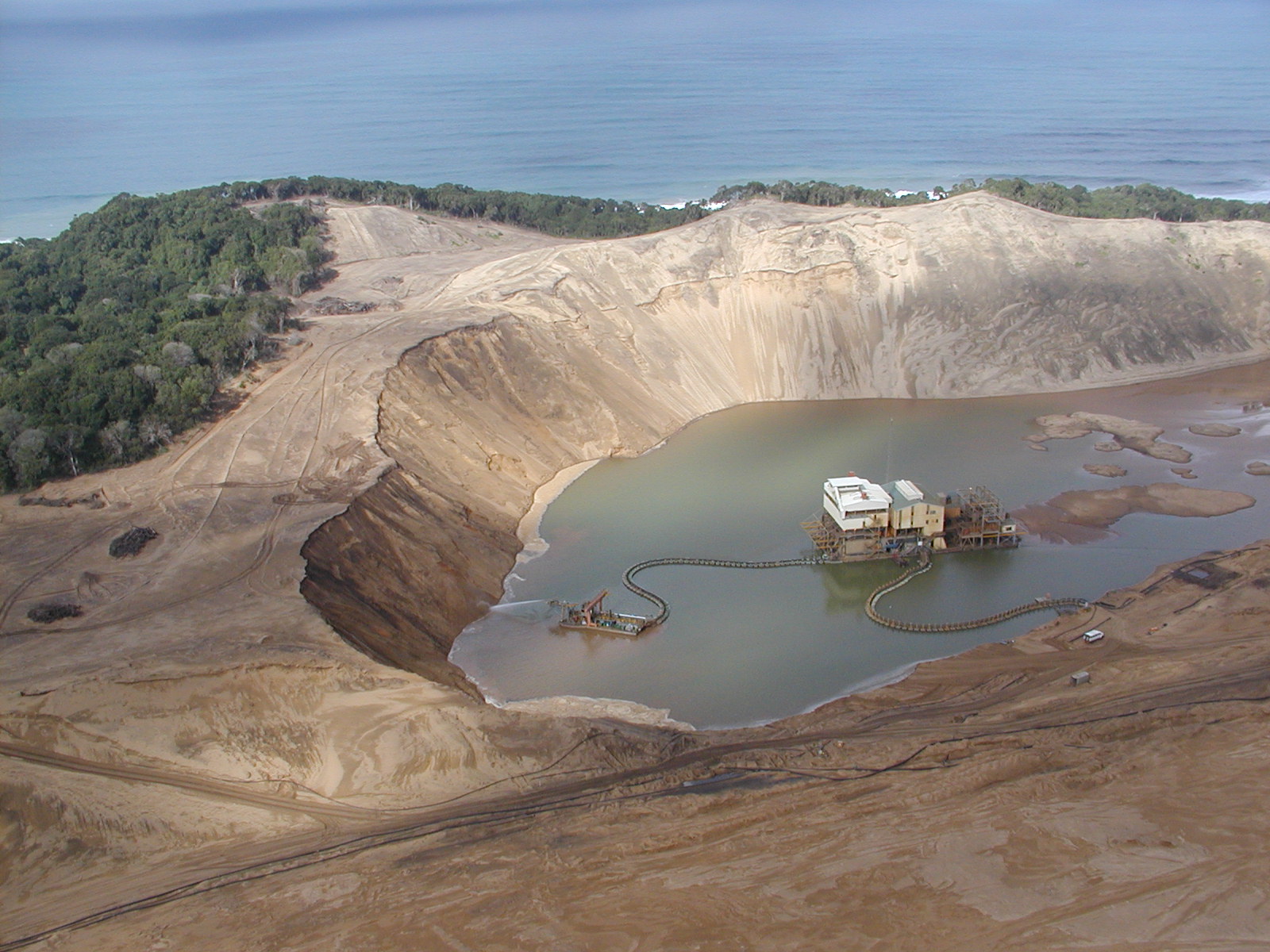 A floating dredger sucks heavy minerals from coastal sand dunes north of Richards Bay. A new company has set its sights on similar mining operations in a protected natural forest on the southern boundary of the iSimangaliso World Heritage Site.

Eight years ago, Richards Bay Minerals abandoned separate plans to mine on the periphery of the reserve – exactly the same piece of land that has now been targeted for heavy minerals exploration.

Zaloumis departed his leadership position prematurely just over a year ago after clashing with property developers and sugar farmers while trying to reverse ecological damage to one of Africa’s oldest game reserves and largest estuarine lakes.

Zaloumis, now director of the Wild Equity Foundation, said there was no doubt that prospecting or mining directly on the boundary of a World Heritage Site “flies in the face of our constitutional responsibility to exercise a duty of care for the environment”.

The prospecting rights application has been made by Eyamakhosi Resources (Pty) Ltd, a hitherto unknown company owned by former Richard Bay Minerals (RBM) employee Sicebi Mthethwa, which has no track record in mining or rehabilitating environmental impacts from mining.

Mthethwa’s proposed venture has aroused concern that he may be acting as a proxy for the Rio Tinto controlled RBM mining company which was forced to abandon its ambitions to mine inside the reserve more than 20 years ago during one of the country’s most heated environmental debates.

Mthethwa has previously declined to comment on these suggestions, while RBM said it would not discuss the activities of other mining companies or “internal discussions”.

Eight years ago, RBM also abandoned separate plans to mine on the periphery of the reserve – exactly the same piece of land that Mthethwa has now targeted for heavy minerals exploration.

Significantly, however, an independent consultant who was asked to assess the ecological impacts has pulled out from any further participation in the EIA project, after AtEnksosi apparently failed to provide him with information that he considered to be “fundamental to the process of assessing potential impacts”.

Reacting to the draft EIA report, Zaloumis complained in a written submission to Mthethwa and AtEnkosi that the draft EIA report was “grossly non-compliant” with the government regulations and should be rejected by the Department of Mineral Resources.

Zaloumis also stated that the report does not consider the specific impacts of prospecting or mining in the buffer zone of a World Heritage Site and also failed to recognise that it was classified as a protected indigenous state forest.

Several other groups have also lodged objections to the report, including the Wildlife and Environment Society of SA (Wessa), the Game Rangers Association of SA, the iSimangaliso Action Group and the Botanical Society of South Africa’s KZN Coastal Branch

Bryan Ashe, co-ordinator of the iSimangaliso Action Group, complained that no public consultation had been held by AtEnkosi, apart from meeting with traditional authorities in the area.

The group, made up of several former members of the Campaign for St Lucia, noted that the proposed prospecting and mining area contained two of the highest coastal sand dunes in the country as well as endangered dune forest.

The Wildlife and Environment Society said the location of the project on the boundary of a Unesco World Heritage Site elevated the issue to a matter of national conservation and environmental concern.

“We have reviewed the (draft EIA report) and submit, with the greatest of respect, that it is deficient in a number of respects and in our view fatally non-compliant with the EIA Regulations,” the society said.

AtEnksosi claimed that during the prospecting phase there would be no “mass clearing of vegetation” and that there was no need to create new access roads into the dune forest.

However, aerial photographs of similar drilling exploration work by RBM in the area reveals evidence of an extensive road network that is still visible 14 years later.

AtEnksosi and Mthethwa were asked whether they wished to respond to the criticisms made by the environmental coalition and other critics of the plan, but no response was received.

They also failed to respond to queries on the reasons why ecological consultant Peter le Roux has withdrawn from the EIA process. DM