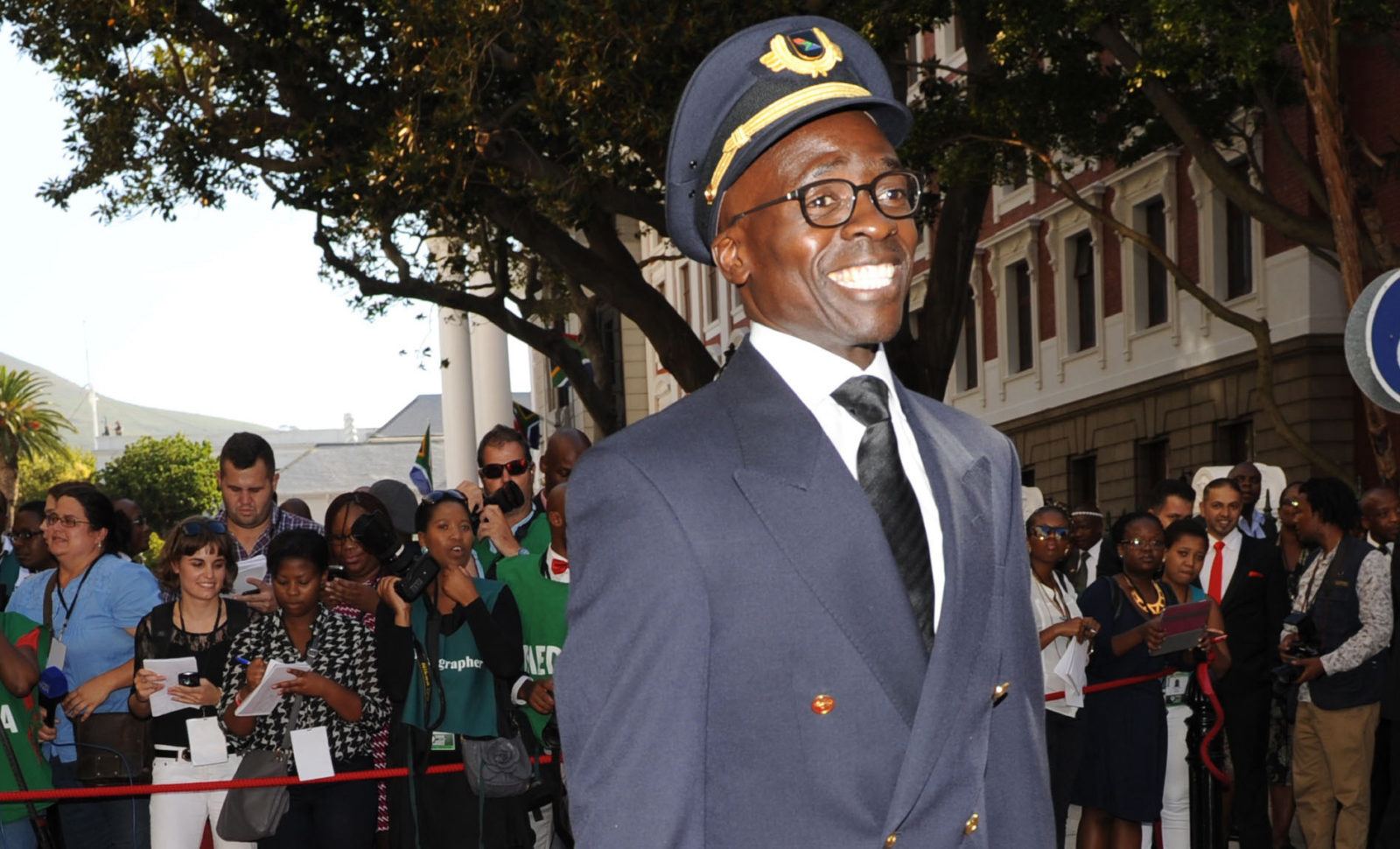 Minister of Public Enterprises Malusi Gigaba arrives on the red carpet ahead of the opening of Parliament and the State of the Nation Address by President Jacob Zuma on February 13, 2014 in Cape Town, South Africa. (Photo by Gallo Images / Foto24 / Leanne Stander)

Despite all the sophistry of his fightback and spin campaign this week, the pilot has crashed. And Home Affairs Minister Malusi Gigaba, the pilot, is in an unseemly fight for his political life as the master chameleon of South African politics appears to be out of runway and of a meaningful political costume in a new era.

Shortly after he was appointed Public Enterprises minister in 2010, Malusi Gigaba wore a pilot’s uniform to Parliament’s opening ceremony. It was a mark of power over SAA and also a symbol of Gigaba’s style and method at state enterprises: he would run them actively and as a political enterprise. He was in charge, the uniform said. Today, SAA is skidding wildly and South Africa is engaged in a massive debate about the airline’s future as it sucks up another R5-billion in public funds that could go to development and social justice.

And Gigaba, the pilot, is in an unseemly fight for his political life as the master chameleon of South African politics appears to be out of runway and a of a meaningful political costume in a new era. This week’s bare-knuckle controversy about whether or not he granted approval to the Oppenheimer family to run Fireblade, the private VVIP facility at OR Tambo, is a symbol of his capture by what is known as the Gupta-Zuma network.

Daily Maverick has requested interviews with Gigaba – who is now Home Affairs Minister – since 1 October. He repeatedly promised to answer our questions and failed to deliver on a final deadline of 09:00 on Wednesday.

Two courts have agreed that on 28 January 2016 Gigaba provisionally approved the Fireblade aviation facility’s request for customs and immigration facilities.

The Oppenheimers leased the land and property for Fireblade from Denel in 2013. Gigaba was an instrumental figure because the private airport needed customs and immigration facilities to make the facility meaningful for the executives and other business people with private jets to get in and out of South Africa seamlessly.

But after the January 2016 agreement, Gigaba rapidly changed his mind and stalled on the approval, before rescinding it. Just over a week after approving, Gigaba wrote an internal memo:

“Anglo must be made aware forthwith that the approval we granted them is also suspended until further notice, pending Denel’s investigations and their conclusions,” and, “Therefore, the Fireblade must not proceed with this …”

What had happened? To understand, it’s worth turning to another document for an explanation.

“In February 2016, the Guptas emerged as beneficiaries in a deal with state-owned arms manufacturer Denel. This deal was another demonstration of how the Guptas access and control key board positions to personally gain from state resources,” according to a report on State Capture called Betrayal edited by academics Ivor Chipkin and Mark Swilling.

“Denel had recently announced the formation of a joint venture company called Denel Asia, but did not identify the Gupta family as shareholders. According to media reports, the joint venture was concluded in the absence of Denel’s permanent CEO, chief financial officer and company secretary, all three of whom were on suspension. At the time, it was speculated that the three were removed to clear the way for the deal.”

Denel had been captured and the Oppenheimer family later claimed that the Guptas wanted to strong-arm the Fireblade facility from them. Gigaba clearly chose sides in this battle – by this time, in early 2016, the public record shows that he had worked with different parts of the Gupta network at various public enterprises.

While there is no proof that Gigaba benefited from his closeness to the Gupta family, either through trips to Dubai or that he directly facilitated deals for them as former Mineral Resources Mosebenzi Zwane did, the Home Affairs minister has admitted to regular visits with the family. In addition, Parliament is probing whether or not he used his power as Home Affairs minister to give residential or citizenship rights to various members of the family. Gigaba has denied this and has alleged that he faces a plot by political enemies.

While Gigaba has belatedly sought political and legal explanations for his flip-flops on Fireblade, the various judgments which have criticised his role suggest it was another minister who took costs into account.

The Gauteng High Court judgment, which first found that Gigaba had perjured himself in relation to Fireblade, records that:

“On 6 May 2015 (Finance) Minister (Nhlanhla) Nene advised the Minister [Gigaba] that after he engaged with SARS (the South African Revenue Services) about the request for ad hoc custom services at the FOB (fixed based aviation operation) it was his opinion that the costs involved for such a single facility could not be warranted.”

When the Oppenheimers piled on the pressure and offered to absorb some of the costs of placing customs officers at Fireblade, Nene approved the agreement, but with caveats. He is shown to be the only Cabinet minister who raised national interest concerns about Fireblade.

“I hereby confirm that I concur with this request; however, I would like you (Gigaba) to note that the South African Revenue Service (SARS) has expressed a concern regarding a private entity funding operations at the VVIP facility at ORTIA. Therefore, I would like to recommend that we review this arrangement on an annual basis for the next three years to ensure that there is no breach of national security. If any challenges are experienced with this arrangement, a decision will have to be made as to whether it is in the national interest to suspend this arrangement,” wrote Nene.

Guptas attempt to smuggle out of Fireblade

There were almost immediate challenges. By April 2016, the Gupta family were caught allegedly trying to smuggle diamonds out of Fireblade, which they used as a customer of the facility. The Oppenheimer family severed business ties with the family, but the incident showed that Nene’s security and national interest concerns were justified.

In three Cabinet roles – Public Enterprises, Home Affairs and in his short stint as Finance Minister – Gigaba has been shown to have used his power and influence to further State Capture networks. Gigaba has denied this, but the evidence is stacking up, as his tough month has shown.

Chipkin and Swilling write that, when appointed Public Enterprises minister, Gigaba stated his intention to use procurement budgets of the state-owned enterprises to build a new generation of black businesses.

At the time, he addressed the Black Management Forum (BMF) and told the audience: “As government, we are committed to the creation of a new generation of black industrialists who are ‘creators’, ‘producers’, ‘strategists’ and ‘decision-makers’.”

“This is more than just an economic imperative but a moral requirement [emphasis added],” concluding that “a strong black industrial class is a prerequisite for robust entrepreneurship and innovation in Africa at large”.

But Gigaba’s subsequent history shows that he allowed the boards of Eskom and Transnet to be stacked with Gupta family cronies, instead of advancing black business.

The jury is out on whether Gigaba achieved the lofty ambitions he outlined to the BMF or whether he enabled significant rent-seeking on behalf of the Gupta network. As Gigaba self-immolated under a weight of scandals and controversies in 2018, it felt like the pilot had crashed his own plane. DM