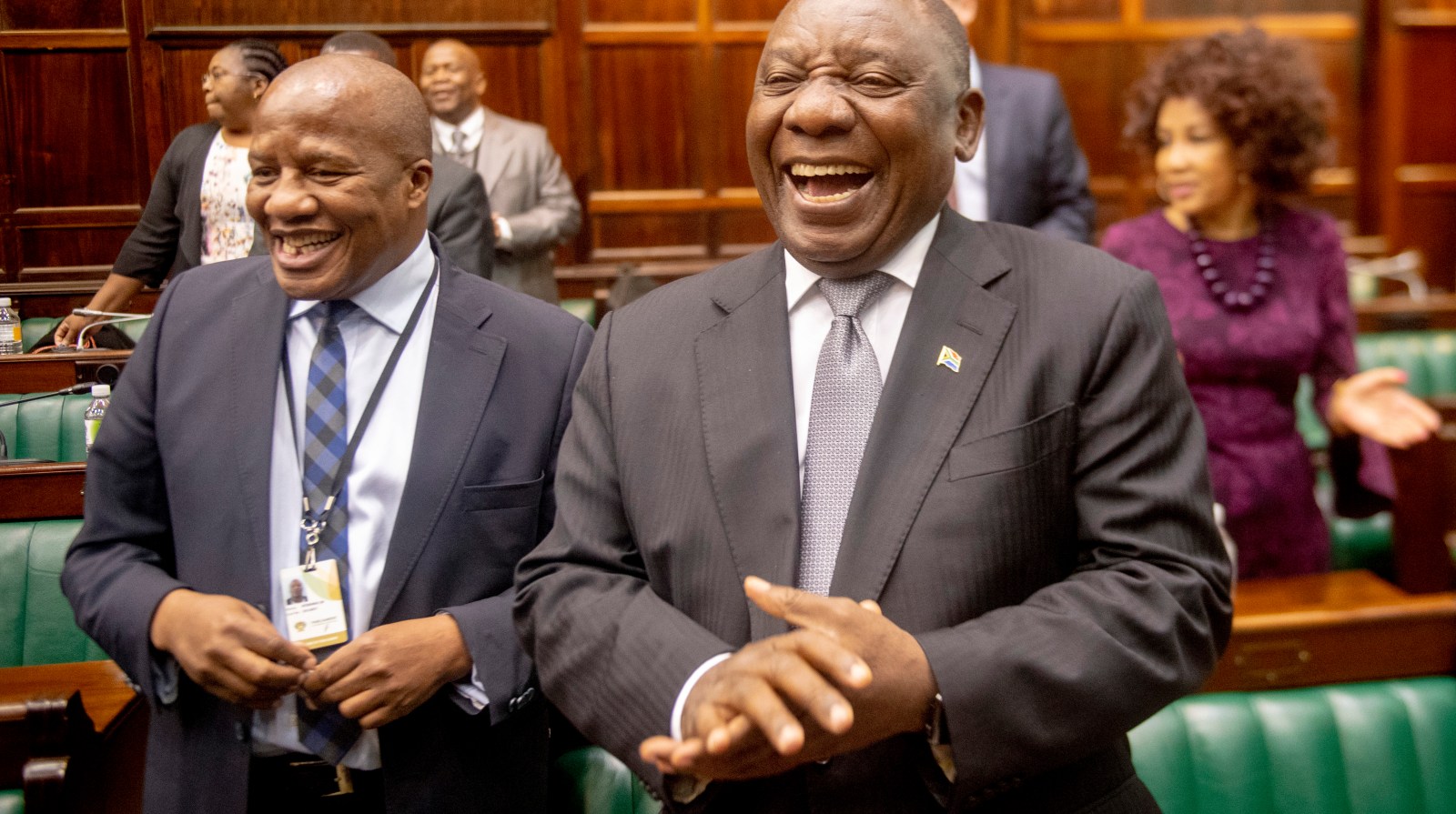 President Cyril Ramaphosa and Jackson Mthembu are seen during the ANC caucus meeting ahead of his question and answer session at the National Assembly on November 06, 2018 in Cape Town, South Africa. (Photo by Gallo Images / Jaco Marais / Netwerk24)

One of the defining questions of the political year that is 2018 so far has revolved around the true extent of power President Cyril Ramaphosa commands right now, and whether he is consolidating his grip on the nation, and on the ANC. It is a complex question, involving determinations around both his apparent support base in the country as a whole, and his political strength within the ANC itself. No analysis, however, should exclude looking ahead, to assess the risks to his power consolidation process. And while, generally speaking, it is probably fair to say that Ramaphosa’s grip on power is increasing, there is also at least one stark risk that could lead to him being significantly weakened.

When trying to evaluate the strength of a current president, it is tempting to ask about the respective strength of other ANC leaders during the same stage in their terms of office – to look at where Thabo Mbeki was at the start of his term as ANC leader, and where Jacob Zuma was at this time 10 years ago.

In both cases, they appeared to have a firm grip on power. Even as Mbeki had been elected unopposed, the problem he had, as Zapiro illustrated so aptly, was the size of the shoes of the person who had come before him. Zuma, in 2008, was the man who mattered, even though Mbeki was still State President. Zuma had won by a large majority at Polokwane, and Cope was not yet still-born.

Ramaphosa, of course, commands far less political power than Mbeki and Zuma had at this stage, mainly because of the way he was elected. His path to power involved the most damaging leadership battle yet in the ANC, and he won by an incredibly slim margin. Also, Zuma had won through using the slate system, while Ramaphosa is in office with people from different factions to his himself. This makes his positioning much more difficult to stabilise.

However, there is one dynamic that may well help him significantly in all of this. During the Nelson Mandela years, it may well have been the case that despite the strong popularity of the ANC, Madiba’s personal popularity was still higher. Then, when Mbeki took over, his brand was probably less popular than that of the ANC. The same was obviously true during the Zuma period, when the ANC was consistently seen as more popular than its leader. This has now, for the first time in nearly 20 years, been reversed. This is an important dynamic, because it reveals that not only is Ramaphosa an electoral strength for the ANC, but that he can always use the A-bomb option, which is to govern the country almost despite the ANC. This matters, because he doesn’t have to actually do that, but it is still an option he has available.

However, there are important risks that may stalk his future.

It is now apparent that one of those risks may not be about the election and its result, but about the mechanics and intricacies of one of the ANC’s internal processes. Before an election, the party’s branches, regions and provinces hold list conferences, meeting to decide who they want to nominate to the National Assembly, the National Council of Provinces, and to the provincial legislatures. These are the people who, depending on how well the party does, end up being deployed to those bodies. Once people are in the National Assembly, they are of course then eligible to be appointed to Cabinet.

And this is where the problem lies. If there is one thing that Zuma has shown himself adroit at over the years, it is the use of ANC internal mechanisms to achieve his ends. Ramaphosa’s problem may be that he is unable to properly control this process. To manage it requires a high level of organisation and resolve, along with resources. But key to it, really, is the presence of the right people to appoint. In other words, Ramaphosa needs people who are both competent, and who support him. And, crucially, who don’t have smallanyana skeletons in their own cupboards. Zuma and Magashule, and others, may well try to reduce the number of those people present in the National Assembly caucus.

The importance of this should not be underestimated. It was Jackson Mthembu’s control of the ANC caucus as Chief Whip during the final months of Zuma’s reign that often proved important. He was able to use that control to institute inquiries into the SABC and Eskom, and so push back Zuma’s minions, and started a narrative that led to the final result at Nasrec. It would be very difficult for Ramaphosa should the same tactic now be used against him.

There is another aspect to this that would affect governance in a very specific way. Because of the nature of the ANC, its broad ideological church, the variety of provincial, linguistic and alliance constituencies and gender and age balances, appointing a Cabinet is incredibly difficult, perhaps one of the most difficult balancing acts a President performs in our system. One could imagine a situation in which Ramaphosa is presented with few people from which to choose. This would obviously weaken him tremendously, in that it would make running the country more difficult for him.

The problem of skeletons is also becoming an important one for Ramaphosa. Strangely, it does not appear that he has to worry about any personal skeletons in his closet, should they exist. First, if they did exist, and if they could be used against him, it is likely that Zuma and his allies would have used them just before Nasrec, as that was the result that really mattered. Second, such is the cynicism around Zuma that it may still hold that, oddly, the release of any skeletons against Ramaphosa may be seen more as enemy action against him. This will not last for ever, but could still be a present dynamic.

But the real issue is the presence of skeletons among those who support him. So deep is the damage wrought by State Capture, and so heavy is the baggage of nearly 25 years in power, that it may be that many ANC leaders have things they would like to keep hidden. This makes each selection a little bit of a risk for Ramaphosa, and could seriously frustrated his agenda.

Meanwhile, the result of the 2019 election itself is of course important for Ramaphosa. If he is able to translate his own personal popularity into a political win, he could consolidate power in an important way. But this is based not necessarily on an absolute number (whether that be 55%, or 60% or 65%) but on the expectation beforehand.

If the expectation is the ANC will get 55% and he gets 58%, he could be in a powerful position; if the expectation is 60% and he gets 59%, it could lead to trouble. That means the recent polls that put the ANC at 48% and 52% could be very useful for him. He may then start to deliberately lower expectations for the ANC’s final figure. In fact, the best guide to the election results may be to see what figures he claims to expect in public (based on the ANC’s own polling) and then increase the percentage slightly to get the true figure.

When trying to examine Ramaphosa’s track record so far, it is also important to remember that being the leader of a party can sometimes mean you can select the timing of major battles. So far, it appears, he has not lost a battle that he has selected the timing of. This means that progress is slow, but effective. But it is also important to notice what may be missing. After Nasrec, there was a common idea that people who were in the middle of the ANC or who supported Zuma to an extent would move across towards Ramaphosa. This is of course most important in the national executive committee. So far, in the NEC at least, there appears to be no public evidence that this is in fact happening. This could be important going forward, as it limits Ramaphosa’s power in the party.

It is obvious that our politics is becoming increasingly fractured. Tuesday’s fracas in Parliament where the EFF appeared to attack first Agang and then the DA is proof of a politics of identity that is fast becoming the norm. Julius Malema tweeted on Wednesday that he thought it would be time to “punish the DA” by taking a metro from them. Again, the same dynamic holds, as our politics becomes more fractured, so the internal politics of political parties becomes more fractured too. Which makes Ramaphosa’s future even harder to predict. DM