Urban development must be for all, demands SA Federation of the Urban Poor 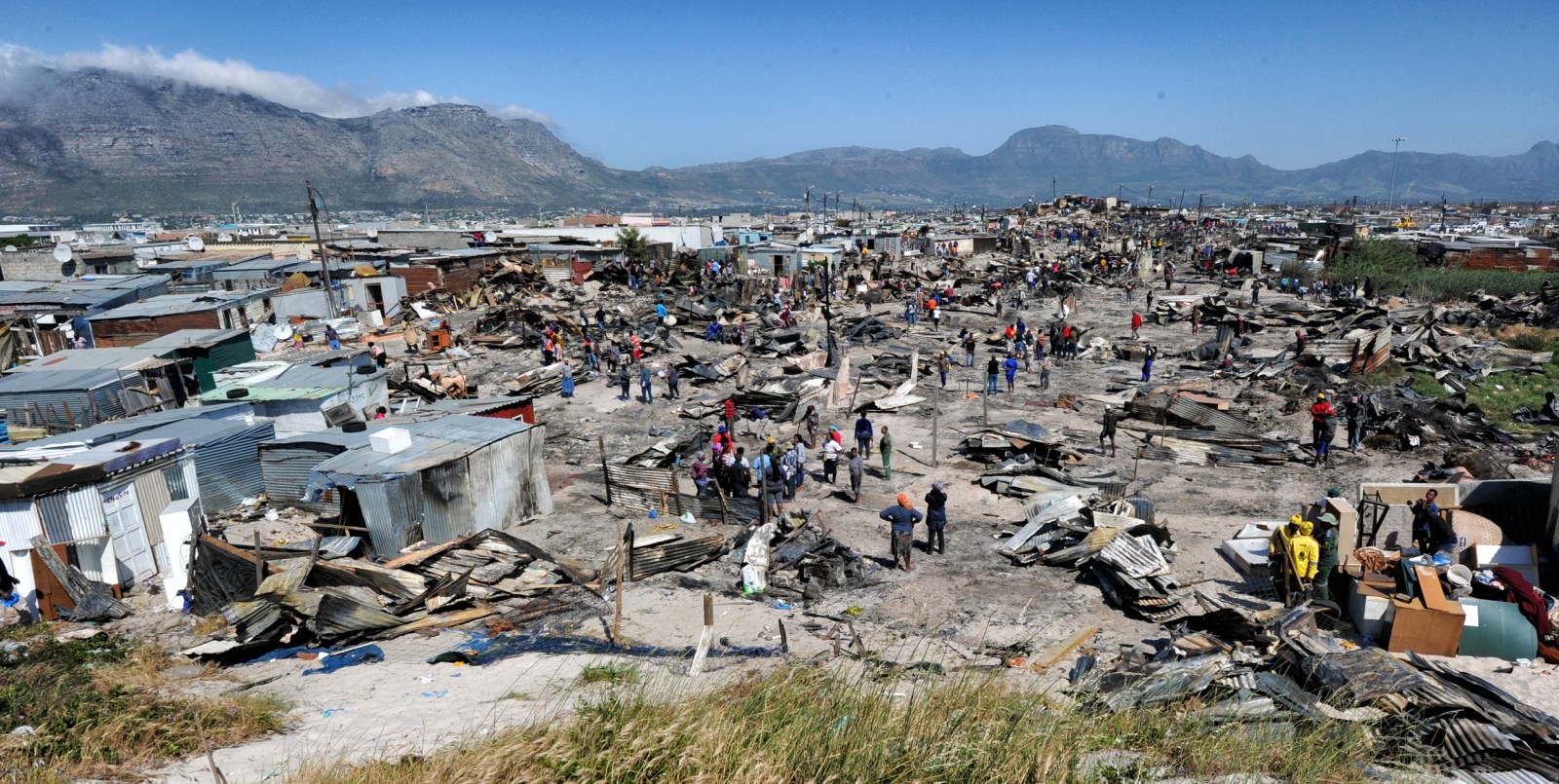 Burnt down homes at Overcome Heights, Capricorn after raging fires ripped through the area on October 26, 2018 in Muizenberg, South Africa. Several people were left homeless after more than 500 homes were gutted down by fire that started in the late hours of Thursday. (Photo by Gallo Images / Brenton Geach)

Earlier this week, the panellists at the South African Urban Conference 2018 — set up to debate the Integrated Urban Development Framework — advised government, NGOs and business to break the cycle of making urban spatial planning for the poor, without involving the poor.

Development is happening in cities, not in the places where most people are suffering. Conferences always include the “haves” and exclude people who are protesting for land, said Rose Molokoane, co-ordinator of SA Federation of the Urban Poor (Fedup).

Molokoane spoke after the Deputy Minister of the Department of Co-operative Governance and Traditional Affairs, Andries Nel, introduced the theme of the South African Urban Conference 2018 as “Activating an all-of-society approach to implementing the urban agenda”.

The Johannesburg conference was hosted by the South African Cities Network in partnership with the department.

The inaugural conference in 2017 introduced the Integrated Urban Development Framework as the primary instrument to drive the urban agenda. The 2018 conference seeks to highlight the key roles of all sectors of government, business and labour and “recommit all key urban actors”, said City of Tshwane councillor Mare-Lise Fourie, a member of the South African Cities Network.

For Molokoane, who says she has attended many such conferences over the years, the fundamental mistake was to discuss a societal problem when those directly affected were not invited to the table.

“We must change the approach on how we address these challenges by talking to the people and not about the people,” said Molokoane.

Molokoane said politicians were used to seeing people protest in the streets, yet ignored them as long as they didn’t damage property.

“We come together to draft and make input in policies in conference and after that they go back to the office and put them in files,” said Molokoane.

Minister of Human Settlements Nomaindia Mfeketo read a message from President Cyril Ramaphosa, who was in Buenos Aires for the G20 summit. Ramaphosa reiterated government’s support of the Integrated Urban Development Framework and a need for partnership with business, labour and traditional leaders to forge a social compact to tackle the challenge of spatial planning.

This could be achieved, read the message, by the “rapid release of well-located but under-used land” owned by provincial governments, local municipalities and state-owned enterprises” — and some privately owned land held for speculative reasons.

Nel said Ramaphosa had “urged the department to lead the charge of urban development and dismantle apartheid spatial planning” and to implement “initiatives for an agrarian revolution”. It was only by “strengthening property rights for all” that government could ensure that the poor live next to economic opportunities.

Through the Urban Agenda set out in chapter eight of the National Development Plan “we can realise the president’s vision, where parents return home before their kids go to sleep because they don’t have to commute far”, said Nel.

“Are we looking to fit people into a pre-designed colonial city?” he asked.

Municipalities lacked interest in the work of research students and saw universities only as a place to source engineers to fill slots in already planned projects.

He urged government to see universities not as ivory towers, but as strategic partners. PhD students, many living the life of the urban poor, were conducting research on urban planning.

Panellist and Nedbank investment banker Remo Moyo said there was a huge rising middle class coming through whose needs were not fully understood. Banks needed to know who the ultimate customer was and create bespoke solutions to the demand, Moyo said.

“It seems every year we meet to review the policy again,” said Fedup’s Molokoane.

However, now was the time to act towards sustainable goals of human settlement.

“Our organisation does not want to be beneficiaries, but participants in the development,” she said. DM