Decoding the Platteland – the Social Magic of a South African Dorp 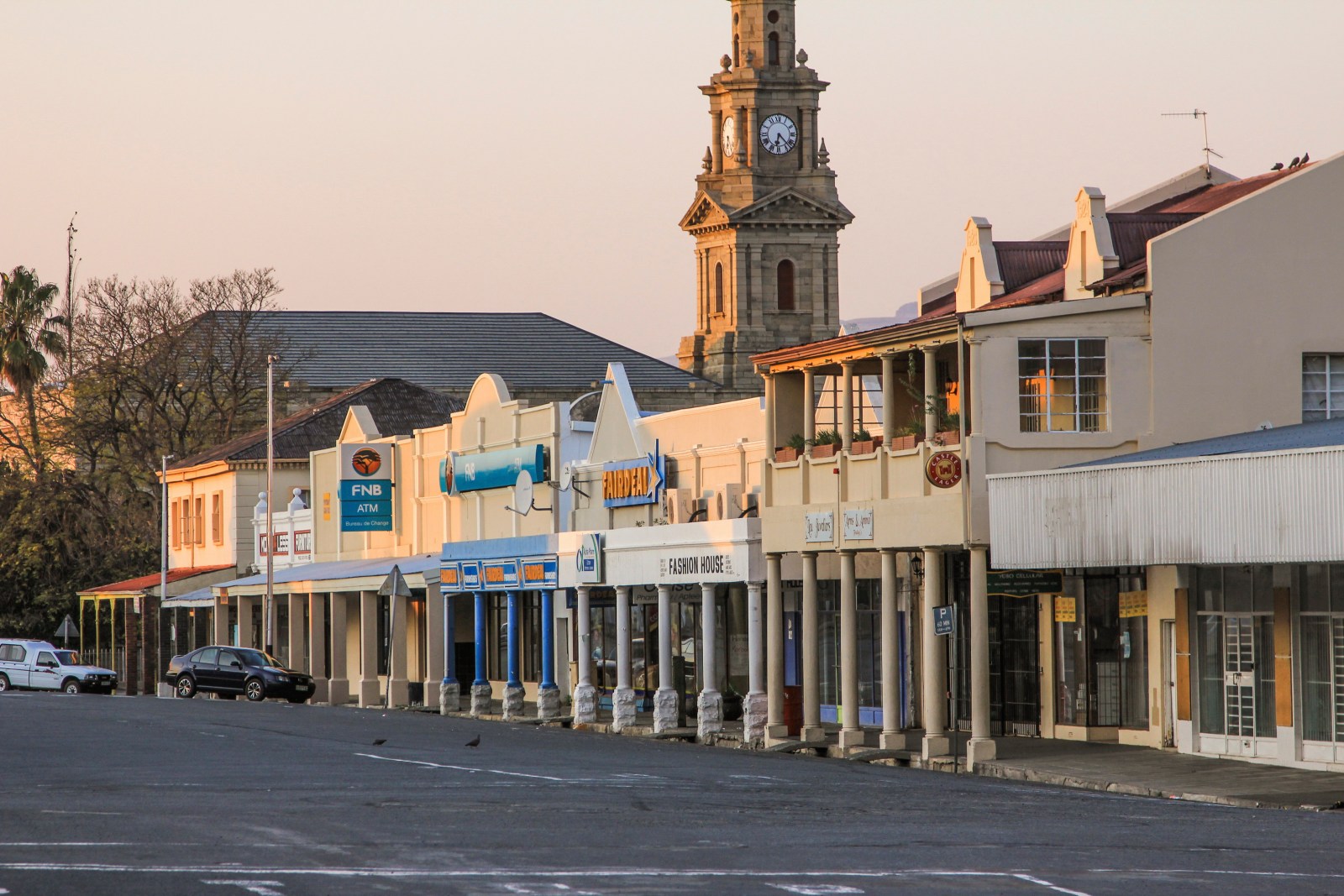 Cradock life: 'It’s because here we can live simple, leaner lives with a large network of people we have come to love, trust, work with and, occasionally, party with,' says the writer. Photos by Chris Marais

In the South African countryside, away from the rowdy cities, there is connection, trust, decency and neighbourliness. Does this mean there is still a place where communities work?

When my husband Chris and I left Joburg and moved to the Eastern Cape Karoo town of Cradock in 2007, our friends and family thought we were stark raving mad.

Many of them still want to know why we packed up our city lives to come to this Karoo river town. Actually, it’s a question that could be asked of any one of a growing tribe of South Africans who have sold up in the city and moved to a dorp in the platteland since the mid-1990s. So why Graaff-Reinet? Why Vanwyksdorp? Why Calvinia, Napier, Lady Grey, Toorwater, Bedford, Botrivier, Prince Albert, Gariep, Riebeek Kasteel, Brandvlei or any one of a thousand other specks on the map?

The biggest part of that answer is that the potential offered by Internet connectivity has been a game-changer for people wanting to downsize and move to the countryside. It means anyone can run a business from a small town and still trade with the world. It means younger families with online jobs can consider semigrating to a safer, more wholesome life.

Anyone wanting a slower-paced, higher-quality life away from traffic gridlock and serious crime is now free to do so and, in many instances, enjoy a city income in a rural environment.

Some perspective might be helpful here. South Africa is one of the fastest urbanising countries in the world, its population heading to cities at rates faster than places like China. Cities offer opportunities, jobs and capital. More than two-thirds of our people now live there.

But there’s a population trickle-back to the rural areas. While researching our latest book, Moving to the Platteland: Life in Small Town South Africa, we were struck by the sheer overwhelming majority of incomers to small towns who swore they would never go back to a city.

For anyone who has ever driven through a ragged little South African settlement and wondered how the locals survive, here is one simple answer from Tarkastad-based magistrate Jo Els:

“We breathe clean fresh country air every day, eat farm eggs and enjoy prime Karoo meat. We have an abundance of doringhout for our fireplaces and braai fires. The people of Tarkastad rely on each other and buy locally where they can. That keeps the town alive.”

The last two sentences are the most telling. Apart from a sense of community and proximity to Nature, trust and reliance on one another are generally the greatest assets of a dorp. Small towns can be dirt-poor on the surface, but super-rich on the inside. Not with money, but in the currency of social capital.

One of the greatest social differences between the city and the platteland is how fiercely interconnected life is here.

People are linked by blood, marriage, school days, working relationships, friendships, shared history and many other bonds that are mostly invisible to freshly-arrived incomers. The bank manager’s cousin may be a cashier at the bottle store. The gardener’s wife’s sister might be auditing your accounts. The kind lady at the pharmacy might be married to the very same truck driver who enrages you by starting up his rumbling vehicle opposite your house at an ungodly hour of the morning.

Anthony Hocking is a writer who moved from Johannesburg to Bethulie in 1983. He owns The Royal in Bethulie, better known as the Book Hotel and explains:

“In the platteland I can see South Africa more clearly. I can see issues develop. I know the people, the kids, who they’re related to.”

This social bond tangibly affects purchasing behaviour and marketing in a dorp. Speak to retailers and they’ll tell you the same thing.

A few years ago, John King moved to Cradock from Port Elizabeth and bought a chicken business. These days he sells six tons of frozen chicken a month, a real success story for a small town like this one.

“Our here, word of mouth is the only way of marketing. People don’t read flyers or adverts. They listen to their friends.”

Senegalese Thiam Miadcke started his trading life on the dusty pavements of Bedford in the Eastern Cape. Now he presides over one of the largest retail spaces in the village, and is a much beloved local character.

“Mutual trust is very important. You must also have a good heart and treat your customers well.”

When Chris and I moved to Cradock, we washed up at the gigantic More4Less emporium, where items of nostalgia are sold.

We bought a table and chairs, and were distraught when our credit card wouldn’t work.

Of course we repaid her trust by coming back the next day, and many days thereafter.

In 1942, The Atlantic ran an essay by Arthur Morgan called The Community – The Seed Bed of Society. In this, and a later book he wrote on the subject, The Small Community: Foundation of Democratic Life, Morgan argued passionately that healthy country towns made for healthy cities and a healthy nation.

“The controlling factors of civilisation are not art, business, science, government. These are its fruits,” he wrote. “The roots of civilization are elemental traits – good will, neighborliness, fair play, courage, tolerance, open-minded inquiry, patience.”

Morgan argued that these traits are best transmitted from one generation to the next in small communities, and then spread throughout entire societies. They were vital threads in the country’s fabric, he said.

“To erode small town culture is to erode the culture of the nation.”

Nobel prize-winning economist Josef Stiglitz also noted the enormous importance and potential of small towns in his 2018 book Globalization and Its Discontents Revisited: Anti-Globalization in the Era of Trump.

He said the greatest wealth of rural areas came in the form of social capital and the most visible product of that is trust. Stiglitz calls trust the “magic fairy dust” of economies.

In big cities all over the world, trust is eroded in various ways and for differing reasons. But Stiglitz points out that trust still exists in many smaller towns where people talk to and watch out for each other. This can be harnessed to transform fortunes.

Are we there yet? No, and in many cases, we are far from it. For a start, local municipalities in South Africa often seem to be actively sabotaging the economic progress of the towns they service.

Yet the influx of intellectual capital from cities is having a visible effect in the most unlikely towns. There is a visible uptick in the fortunes (and numbers of school-goers) in dorps around the country.

There is also a growing social push-back against grass roots corruption and cadre deployment, but that’s a strand to pull on for another day.

Here’s one last case study about how trust and simplicity are the key to happiness in a dorp.

Pieter de Kock arrived in Cradock a decade ago from Pretoria via Ballito and Hofmeyr, and set up a Mediterranean comfort food place called Mila’s. It quickly became popular with locals and visitors.

But one stream of income can never be enough for a country chef with four children in school.

Eventually he closed Mila’s and branched into catering for farm functions, supplying meals to the Cradock business community, running tuck shops at two schools and managing the restaurant at the nearby Mountain Zebra National Park.

Success is due to Pieter’s relationships and local knowledge – social capital, in other words. He knows exactly which grocery store gets the freshest veggies first, who supplies the best value quality cuts of meat.

“I know the most important people – the ones behind the counters. I know who the best blockman is, and who is still learning.”

He has few financial safety nets, and no margins for error. But the city will probably never see Pieter again.

“I still feel like a rich man. In my opinion, the true wealth of the platteland cannot be measured in money terms. It is in the strong relationships with people, the goodwill. It’s the leisure and freedom that you don’t have to pay for, the way you do in the city. It’s the peace of mind, the sight of fish eagles at the reservoir, and learning to live in the present.”

So to answer Why a dorp? Why Cradock? It’s not because the town is perfect. Far from it, in fact. It’s because here we can live simple, leaner lives with a large network of people we have come to love, trust, work with and, occasionally, party with.

Also, the local butcher makes the best biltong in the known Universe. DM

Julienne du Toit and Chris Marais are the co-authors of Moving to the Platteland – Life in Small Town South Africa, available in selected stores and from www.karoospace.co.za in print and Ebook formats.