And here is the (British) news of a South African fuel price drop, and other matters economic 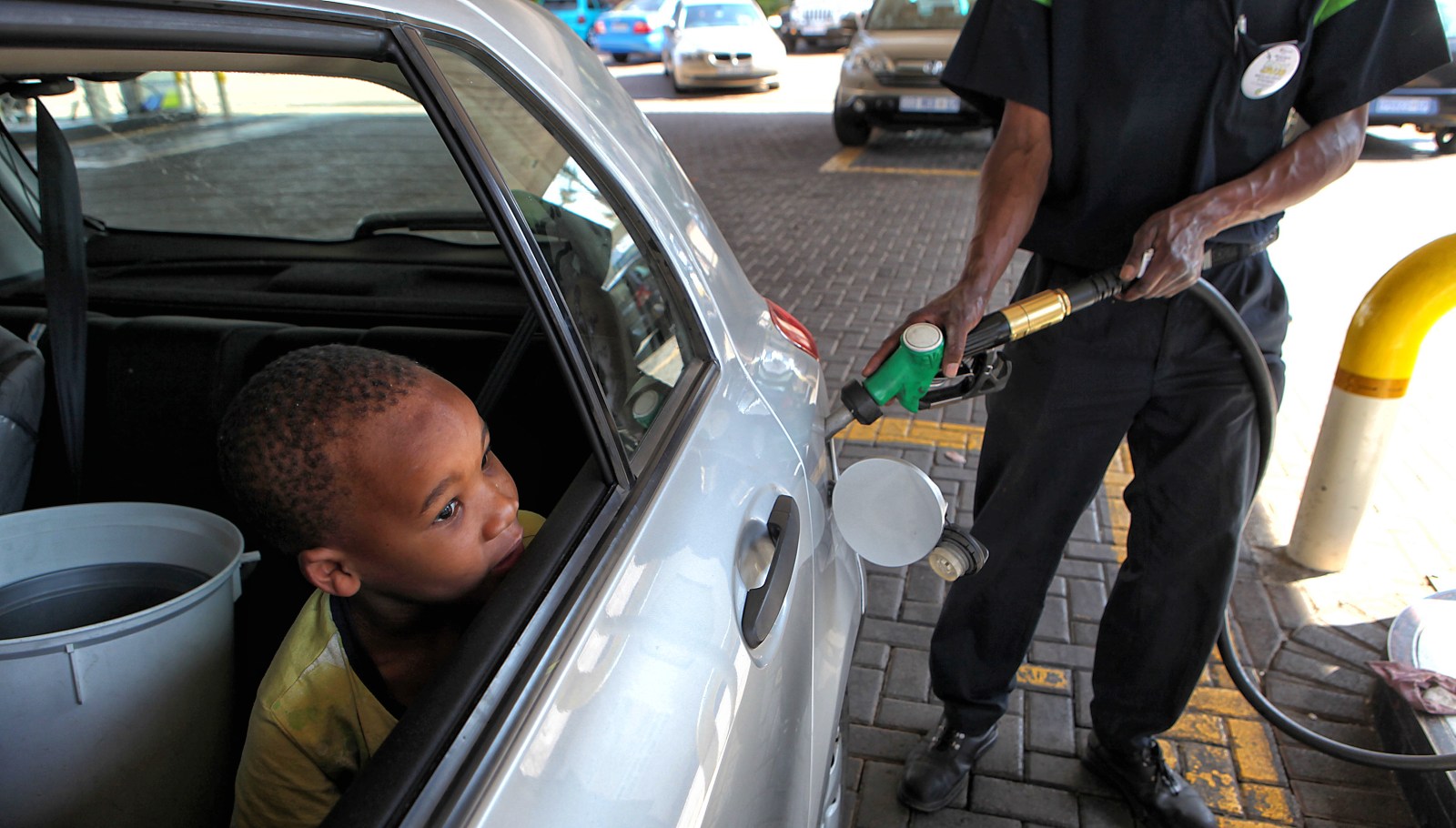 Motorists fill up their tanks before the price of petrol goes up by over 90 cents on September 4, 2012 in Johannesburg, South Africa. (Photo by Gallo Images / The Times / Alon Skuy)

A petrol price decrease is on the cards for November. That was not announced in Parliament during Wednesday’s Q&A of economic portfolio ministers, including Energy Minister Jeff Radebe, but by his deputy Thembisile Majola during an interview with the BBC’s HARDtalk. It’s a curious way of doing governance.

The petrol price has increased repeatedly and consecutively in 2018, pushing up prices to unprecedented levels. There were opposition-supported protests against the petrol price hikes that also triggered taxi fare increases, a hard blow for working-class and poor South Africans who already proportionally spend the most on transport, according to Statistics South Africa as far back as 2015.

In September 2018 Energy Minister Jeff Radebe announced a once-off cap on the increase of petrol to bring relief to consumers, staving of the hike but for a 5 cents per litre increase to accommodate the negotiated salary increases for petrol attendants, cashiers and administrative staff.

A month later, after the Cabinet meeting of 10 October, Radebe accompanied Communications Minister Nomvula Mokonyane to the traditional post-Cabinet meeting media briefing the next day to tell journalists Cabinet had agreed to look into fixing the maximum price for 93 octane unleaded petrol to help shield consumers from escalating prices.

“Government is deeply concerned by the rising cost of petrol in South Africa which is largely caused by the rand/dollar exchange rate, and the price of crude (oil),” said Radebe, adding that a task team of officials from his department and National Treasury was leading consultations with the domestic petroleum industry. None of that was included in the official Cabinet statement on that meeting.

But the publicly announced deadline of 18 October came and went without any further announcement on these discussions and consultations. That is until Wednesday when Radebe told the House consultations would continue until January 2019.

Further consultations were needed with the industry, as well as a socio-economic impact study to avoid any unintended consequences. But government was serious about restructuring how the petrol price is determined – even if South Africa had no oil wells, nor control over the oil price or the exchange rate, and although any proposal would not include the Road Accident Fund (RAF) levy that is included in the per litre petrol price.

That RAF levy would be dealt with separately, Radebe told MPs.

“We are serious, intending to put a cap, especially on 93 (octane),” he said during Wednesday’s ministerial question time in the National Assembly, adding to his earlier comment.

“We are confident that before the end of January 2019, there will be a proposal on the table.”

Not a word on November’s petrol price drop in the House. It would have been a bit of good news in the wake of a further rise in unemployment – to 27.5%, or 37.3% on the expanded definition that includes those who’ve given up looking for work – and a brutally honest Medium-Term Budget Policy Statement (MTBPS) that there’s simply no more easy money available. And 2019 is an election year.

Instead the announcement came from Energy Deputy Minister Thembisile Majola in an interview with HARDtalk around the question: Is the ANC incapable of delivering the change South Africa needs?

“For this month that we are going into now, November, actually we are going to have a decrease, simply because the price of oil has come down and the rand has strengthened,” she told HARDtalk presenter Stephen Sackur, who had asked why South Africa’s government was not putting a cap on the price of petrol in an effort to alleviate pressure, given 27% unemployment and 50% poverty levels.

On a cap to the petrol price, Majola did not answer the direct question, relying instead on pointing out that South Africa, without its own oil, depended on the international oil price over which the country had no control. Not a word on the consultations with industry.

That there could have been a slight decrease emerged from the South African Reserve Bank (SARB) monetary policy review documentation published a day ahead of the monetary policy forum meeting of 30 October in Soweto, Johannesburg. The graph on petrol shows a tiny dip, in an overall steadily increasing line of price increases to over R17.40 per litre towards 2020.

Coincidentally, the petrol price was revised heavily upward in September 2018 from the March projection that saw the price of a litre of petrol around R15.87. Generally, expectations for declines in petrol prices do not look promising, certainly not on the combination of the rand exchange value and anticipated oil prices.

That SARB documentation also shows how investment has flat-lined from 2014, with private sector investment actively dropping and public sector investment also declining, albeit from a much larger base. Such data underscores what many civil society organisations and trade unions have described as the business investment strike involving up to R1.4-trillion by some accounts. According to the World Economic Forum Executive Opinion Survey cited in the SARB documentation, corruption and government instability have been key factors since 2015.

It is this background that will test the impact of the R290-billion pledged at the recent investment conference, described in an official Presidency statement at its conclusion at the weekend as “the beginning of a new narrative on investment in South Africa”.

That new narrative, however, is facing an uphill battle, and not only over the yet-again increased joblessness statistics, but also contestation over controversial issues like the liquidation of VBS Mutual Bank, which the EFF questioned again on Wednesday.

EFF MP Mbuyiseni Ndlozi asked why National Treasury was rushing to liquidate the mutual bank, particularly as there’ve been no arrests or prosecutions of anyone – and it wasn’t unknown who was responsible.

“Why kill a good initiative like VBS? Why shut it down? Is it because it is in the hands of black and rural people?”

Deputy Finance Minister Mondli Gungubele said government would “never take pleasure” if an institution collapsed, particularly one that took “forward one of our strategic goals of financial exclusion. We can’t be happy.”

But there were no detailed specific answers, despite questioning by IFP MP Mkuleko Hlengwa.

The VBS mutual bank liquidation hearing is set down for 13 November 2018 in the Pretoria High Court, according to a statement by the SARB. Court papers filed by Reserve Bank Deputy Governor Kuben Naidoo, who is also the chief executive of the Prudential Authority, show that the curator in place since 10 March 2018 indicated there were no prospects of saving the mutual bank.

“VBS is hopelessly insolvent, for factually and commercially. Against the background of massive frauds and the theft of depositors funds… it is of necessity and in the interest of the creditors of VBS and the public that VBS is wound up as a matter of urgency,” according to Naidoo’s affidavit.

It also emerged from the court papers that only half of the 17,369 new bank accounts opened for retail depositors, banking speak for the individuals who invested often their life’s savings, have activated their accounts. That activation is necessary to access the R100,000 per person the SARB has guaranteed. If a person had deposited more, that money is most likely unrecoverable, as is the R1.5-billion 14 municipalities had invested in contravention of the Municipal Finance Management Act (MFMA).

Earlier on Wednesday, Parliament’s finance and appropriations committee heard public comments on the MTBPS presented by Finance Minister Tito Mboweni, which the national legislature must process, and adopt (or not) by the end of November.

Neither civil society nor trade union federations were particularly pleased with what was described as an “austerity” approach, with the Budget Justice Coalition representing at least 11 organisations calling for the reversal of the value added tax (VAT) hike to 15%, and to seriously look at progressive taxation that would target luxury goods and high earners.

And with both Cosatu and the Federation of Unions of South Africa (Fedusa) before MPs, it was certain the labour federations would comment negatively on criticism of the public sector wage bill that accounts for 35% of Budget.

And Cosatu parliamentary liaison Matthew Parks agreed, pointing to “looting” at State-owned Entities and plain wrong priorities like building five departmental head offices and a consulate in New York at a cost of R12-billion. There should be a “huge slashing of the executive bill” and of ministerial perks.

“It’s not cleaners or security guards who’ve build Nkandla,” said Parks, adding in a clear reference to a parliamentary reply regarding the now Home Affairs Minister Malusi Gigaba: “Our former finance minister spent three-quarters of a million rand to fly with his wife around the world.” DM