Defiant De Lille resigns – but is not going quietly 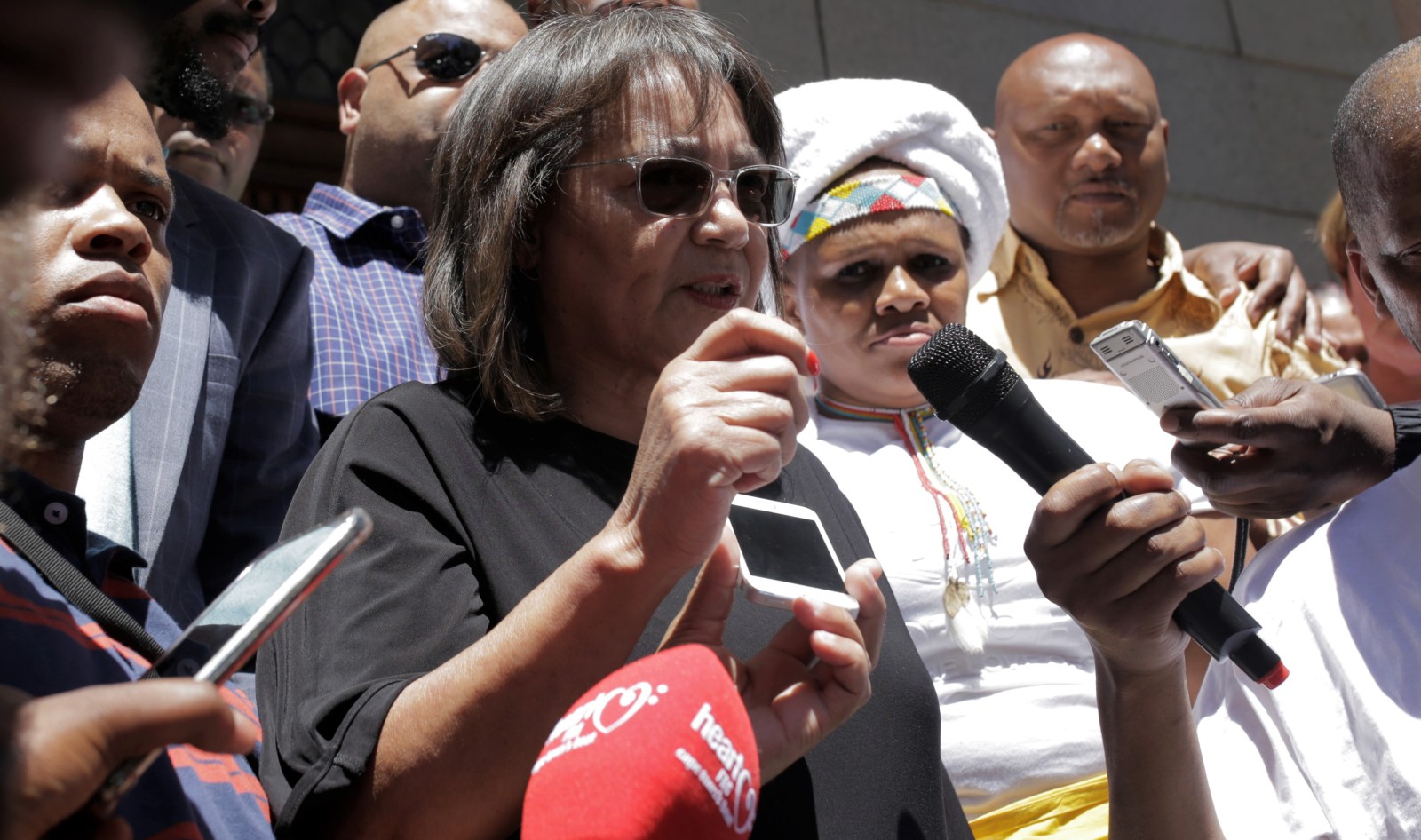 As a defiant Patricia de Lille announced her resignation as Cape Town mayor and member of the Democratic Alliance on Wednesday she also vowed to “those idiots that continued to smear my name in public” that she would clear her name in public. She also described her increasing acrimonious relationship with the DA as “abusive”.

Following a week of guesswork as to whether Patricia de Lille would quit as mayor of Cape Town or not, on Wednesday afternoon on the steps of the Western Cape High Court, she signed her resignation letter.

De Lille, who has been mayor of Cape Town since 2011, will no longer wear the mayoral chain from 7 pm on Wednesday evening.

“I am resigning today, effective 19:00 today,” announced De Lille. Her resignation follows a protracted battle between herself and the Democratic Alliance.

“I am also resigning as a member of the DA. I can no longer stay in this abusive relationship…

“After 18 months, I am free. Free from oppression. Amandla!” De Lille said

On Tuesday there was confusion as to whether or not her resignation letter had been submitted to Council Speaker Dirk Smit.

A journalist from a Cape Town local radio station, HeartFM tweeted that they had confirmation from Smit that De Lille had submitted her resignation letter, which she denied.

However, on Wednesday, De Lille accused Smit of being a liar for stating that she had resigned when he showed the journalist a letter of her resignation addressed to DA leader Mmusi Maimane.

Reading from her resignation letter, De Lille addressed Smit specifically by stating: “You have jumped the gun yesterday.”

De Lille said she would take leave for two weeks to spend with her family, then she would decide what to do “in the next phase of my life” but confirmed that she was in the process of writing her book and that she had received “many offers from civil society”. She then left the briefing to clear out her office ahead of incumbent Dan Plato’s return tomorrow as mayor.

Plato is expected to be inaugurated on Thursday morning.

Following De Lille’s resignation, two other councillors resigned from both the city council and the party. Councillors Philiswa Marman and Jonathan Cupido resigned and De Lille said: “I expect more to come.”

De Lille and the DA have been at loggerheads since the party first wanted to institute corruption charges against her.

On Wednesday, De Lille described the party as the “Dramatic Alliance” saying it could do what it wants as they are “real drama queens”.

Over the past two weeks, tensions between the mayor and the governing party in the City of Cape Town reached fever pitch. During Thursday’s council sitting – where De Lille was due to make her farewell speech, five DA councillors quit as members of both the party and the council, citing racism within the party. One of the councillors who quit was Shaun August, DA chief whip in the city council.

On Tuesday, city council speaker Dirk Smit laid charges at the Cape Town police station against De Lille, Brett Herron, mayoral committee member for Transport and Urban Development and Melissa Whitehead based on recommendations based on the controversial Bowman’s report.

On Wednesday, De Lille questioned the report as “politically motivated” and wants the court to decide which report is valid. There are two Bowman’s reports – one which implicated De Lille, Herron and Whitehead in tender irregularities and recommends charges be brought against De Lille while the other clears De Lille of any wrongdoing.

De Lille approached the Western Cape High Court on Wednesday to seek clarity on the validity of the reports. DM