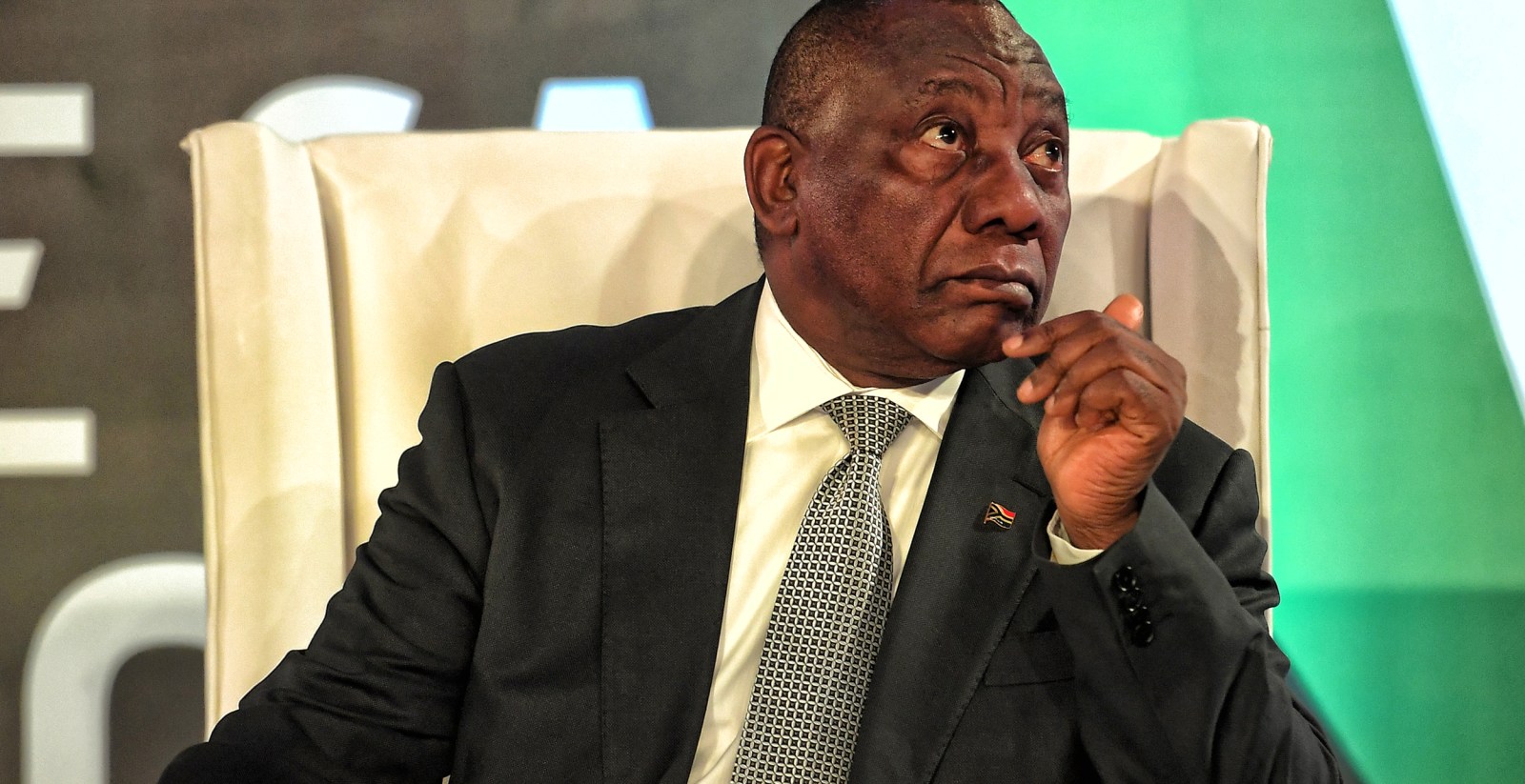 On Monday morning, just as the day’s first Malusi Gigaba news cycle was ending, the ANC’s Integrity Committee issued a statement. It said that it was recommending to the ANC’s national executive committee that those implicated in the VBS Mutual Bank saga should be “directed to step aside from all leadership positions and activities of the ANC”. It also confirmed that none of those implicated had approached the committee as they had been advised to do by the office of the party’s secretary-general. It is now an obvious test for the ANC, and its supposed “New Dawn”, for this to happen. If these party officials do step down, it could mark a sea change to the way corruption is dealt with in the party.

It is well known that one of the biggest problems the ANC has faced in its transition from a liberation movement into a governing party was dealing with corruption within its ranks. Time and time again the party’s own discussion documents, helpfully written by ever-hopeful committees, have lamented this deeply corrosive issue. The party’s actions over the next few weeks and months could be critical to whether or not it is actually changing direction on corruption tolerance.

Should the Integrity Committee succeed in its intention, it would be a boost to President Cyril Ramaphosa and probably would be an energy shot to its election prospects. However, if the committee fails, the ANC’s opponents will claim, probably correctly, that a culture of corruption has become too embedded in the party for it ever to change, especially after the Integrity Committee asked then President Zuma to step down in early April 2017, for obvious reasons, and was ignored by the party’s leadership.

When the (next) history chapter of the ANC is written, there will be one phrase that will stand tall above all others for the damage that it has done to the party. That slogan is “innocent until proven guilty”. While it is a phrase that is legally correct, it was used and used again and again by those supporting Jacob Zuma as the candidate for the party’s leadership in the run-up to 2007 in a brutally ferocious manner. Not to support Zuma almost became a sign that you did not believe his innocence, not that you thought he would not be the correct choice as leader.

Once Zuma was installed at Polokwane in 2007, the same slogan was used to support him many times more, and by anyone who was accused of any wrongdoing. Most of them lost countless court cases and would still cling to “innocent until proven guilty”, in the process augmenting it with the equally shifty “not all appeal options are exhausted”.

These events prevented the installation of another possible political culture, a culture in which party office-bearers accused of wrongdoing would resign until their names were cleared. That is what happens in other, perhaps more established democracies where there is more political contestation between parties. Instead, within the ANC, came a culture in which the party would use politics to move against the criminal justice system. Even now, there are people, such as deputy secretary-general Jessie Duarte, who will question the findings of the courts in important and settled cases, such as that of Tony Yengeni’s corruption.

To make matters worse, others used Zuma’s example to obliterate the accepted norms and drive a truck through what most consider morality and honesty. How else could Jacob Zuma lead the Moral Regeneration effort or Mduduzi Manana, who was found guilty of assaulting a woman, appear on a poster about an event against gender violence?

Such was the brilliance of that approach that the government officials would use our – taxpayers’ – money to exhaust every appeal option open to them; even if convicted in a High Court, they could still hold their office for years until their final chance to complain was scuttled.

The VBS issue, as outrageous and terrifying as it is, now presents a serious test to the ANC’s new approach. It is likely that the real battlefield will be the NEC itself, which is still full of Zuma supporters and dutiful executioners. Because of the slates, money and power, it is likely that those who are implicated will have real support in the NEC. Many of the NEC members themselves will at the very least feel exposed. They will not let them go down without a fight, because they themselves will be weakened. As a result, the battle in the NEC, should it come to a debate, could be difficult and prolonged.

The ANC’s officials will themselves also argue strongly that they have been treated unfairly. On Friday, the Limpopo ANC Treasurer Danny Msiza lodged his court application challenging the report, claiming that he had been unfairly treated as he had not been interviewed before it was published. He was joining others who are also challenging the report’s findings on the grounds of unfairness. They will say that having already been treated unfairly by Advocate Terry Motau, who wrote the report, the NEC would be perpetuating that unfairness by stripping them of their positions in the party. It would be a reprise of the same refrain, “innocent until proven guilty”.

At the same time, it is also not necessarily certain that even if the NEC decides to remove these people, they would actually step down. In the Eastern Cape, Andile Lungisa has defied the NEC by staying on in his position as a Member of the Mayoral Committee despite it instructing him to step down. He is appealing a conviction of assault, after breaking a glass jar over the head of a DA councillor during a fight in the council chamber there.

It would be a profoundly difficult and complicated situation, indeed, should a group of ANC members all refuse to stand down from their positions even if the NEC insists that they must obey the Integrity Committee’s instruction and step down.

It should also be remembered that this is not the only case that is being considered that could change the course of the party. In Gauteng, the provincial integrity committee is due to give a final verdict in the cases around former Health MEC Qedani Mahlangu, and the party’s Gauteng Chief Whip Brian Hlongwa. Mahlangu currently faces no charges but is seen in the public eye, with much justification, as the person responsible for the Esidimeni tragedy. Hlongwa is the subject of a Special Investigating Unit report that found him responsible for looting of the same health department several years ago.

All of these are difficult choices, where the people concerned will argue that they should not be forced out of their positions. But the NEC also has to balance the way the ANC looks at the moment. At the moment it is possible for the opposition parties to continue painting it as a party so mired in corruption as to be unable to escape it. It is possible that the 2019 election could show some evidence that that perception is taking hold, and that it could suffer at the ballot box. Especially as the Zondo Commission of Inquiry into State Capture is likely to produce more evidence of corruption which will damage the party further. As more and more people who see the Struggle as the past – and not the future – start to vote, the so-called “Liberation Dividend” may now be paid out to some extent.

All of this means that there is a very real electoral interest in making changes to the party’s culture. The VBS and Esidimeni scandals would be useful turning points in trying to show how things have changed.

However, getting specific people to stand down from their jobs may in itself not necessarily change very much in the party. It is unlikely that those who step down would lose what political power they have. It is not uncommon in the ANC to find that the person who holds the political power in a province is not actually the leader of the ANC there. In KwaZulu-Natal, Sihle Zikalala is the MEC for Economic Development while Willies Mchunu is the Premier. In the Northern Cape John Block was the leader while Finance MEC, but ensured that Sylvia Lucas was the Premier. If someone is removed from their position, they may still be able to wield influence and power.

The problem the ANC faces is surely a political one.

If it does not take action against these people now, it may never be able to change, with the consequence of losing support at the ballot box. If not in 2019, perhaps in 2024.

But if it does change now, and survives the internal battle that will certainly explode, it may be able to change itself properly, and thus stay in power for a longer period. It is well and truly their choice. DM