Another arrest in Glebelands Hostel killings saga, but complexities keep justice at bay 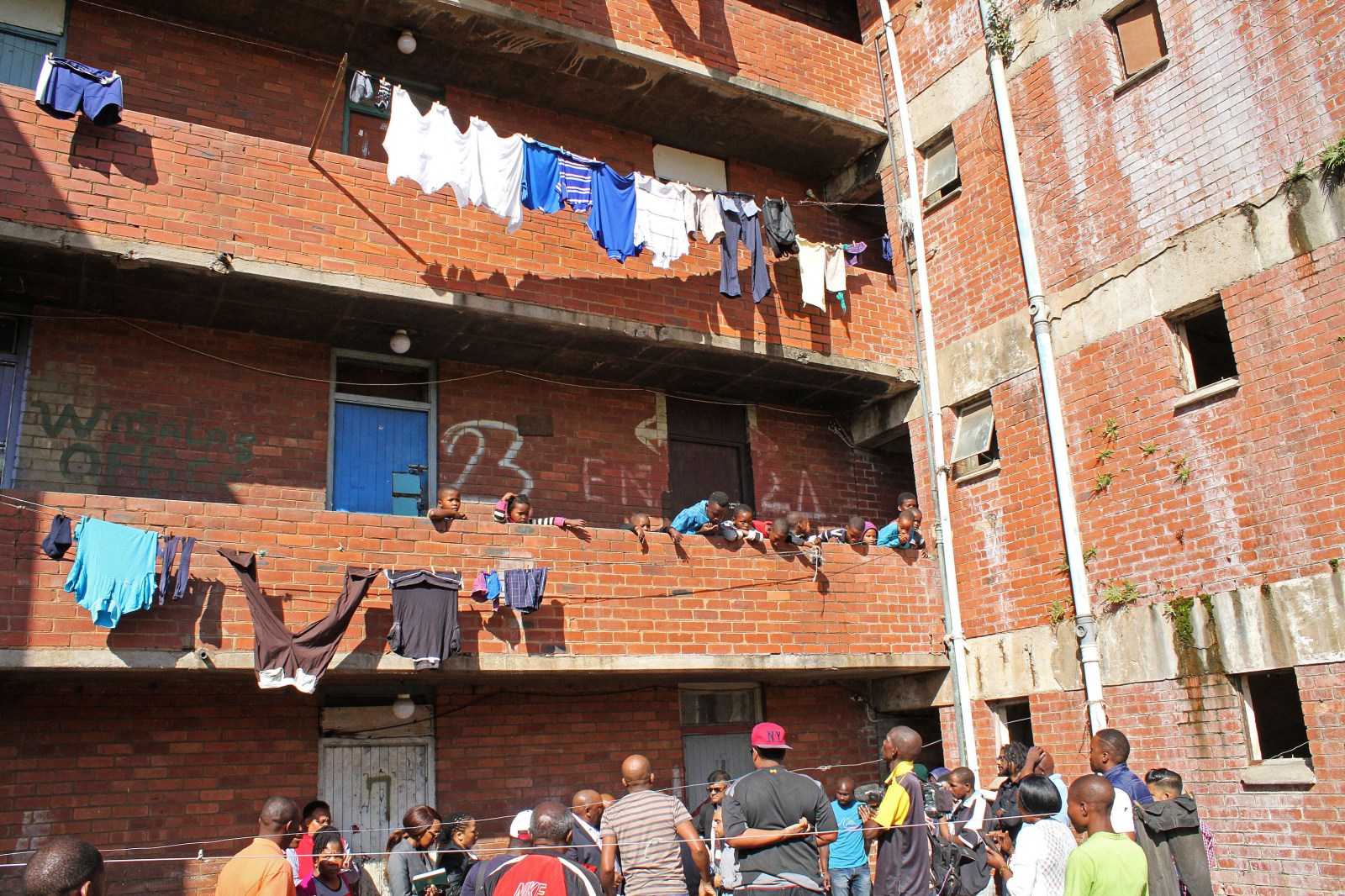 The Moerane Commission of Inquiry visits the Glebelands Hostel in Umlazi to assess and gather evidence on political killings around KwaZulu-Natal on July 21, 2017 in Durban, South Africa. (Photo by Gallo Images / City Press / Siyanda Mayeza)

The number of arrests of hitmen linked to the Glebelands Hostel contract killing syndicate is climbing. Soon, it is hoped, another suspect will join the eight awaiting-trial prisoners whose combined cases will be heard by the Pietermaritzburg High Court on 28 January 2019.

Former Durban Central SAPS detective Bhekukwazi Mdweshu and his seven co-accused are charged under common purpose on 22 counts of murder, attempted murder, racketeering, extortion and possession of a prohibited firearm and ammunition.

On 15 October another Glebelands man was arrested and linked to at least one of the hostel killings. The suspect, who was at the time allegedly driving a stolen vehicle, was found in possession of an unlicensed firearm and 39 rounds of ammunition, and was, according to hostel sources, wearing a police cap. One of the men travelling with the suspect, who escaped, is also believed to be a hitman, originally from KwaMashu Hostel, who has been living at Glebelands and may be involved in other hostel murders.

While this is good news for the community and broader public security, the recent arrest concludes a sad chapter of yet another young man’s life that will be forever shadowed by those he has allegedly killed and the crimes he is thought to have committed.

It did not have to be this way. For a while he had other opportunities. But the venality that gave rise to, facilitated and encouraged the iniquitous state of Glebelands was overwhelmingly against him — and so many young men just like him. Expendable tools in politicians’ hands, their lives are worth less than their victims’.

Headed by Brigadier Tebogo Mbhele of the Provincial Organised Crime Unit, the team of detectives rounding up Glebelands killers has excelled over the past two years. Not only have they given back hope to the community of a more secure existence, but they have proved that not all police are willing to take a bribe to make a docket disappear. And while some cases may not have drawn the same public interest as the Glebelands Eight, a number of other hostel-related matters have been quietly making their way through the courts.

Painstaking, diligent detective work is paying off, despite resource constraints not suffered by the team investigating political killings. The prosecutor, meanwhile, has had to withstand plots against his life emanating from within prison walls. So hats off to the team — we salute you and wish you success.

While considerable progress has been made, much remains to be done to bring stability and peace to Glebelands.

Mdweshu’s handler is yet to be revealed. We are waiting for that.

We are also waiting for broader investigation into the disappearance of large numbers of police firearms from Durban Central police station.

In answer to questions raised in Parliament last year, former police minister Fikile Mbalula revealed that of the 2,270 (yes, 2,270) police firearms “lost or stolen” between 2014 and 2017, most (567) were from KwaZulu-Natal, of which the overwhelming majority was “stolen” from Durban Central SAPS.

This, incidentally, was at the very same time that Mdweshu was deployed at that station and the period correlating precisely with the extreme violence at Glebelands during which there were many reports of state-issue firearms having been used in attacks on residents.

We are also waiting to hear why two (one current, one since retired) deputy provincial commissioners failed to investigate when concerns regarding Mdweshu and the missing firearms were first brought to their attention way back in 2014. And why has there been no response to the requests for an investigation into these particular “failings”, or of alleged perjury before the Moerane Commission of Inquiry into KwaZulu-Natal’s political killings?

We also want to know why investigators from the Durban branch of the Public Protector’s office are so reluctant to visit Glebelands. Why are they not monitoring the implementation of remedial action and precisely why has there been such resistance to investigating hostel contracts?

KwaZulu-Natal’s Independent Police Investigative Directorate also has cases to answer — specifically, does the directorate actually have a Durban branch? The directorate’s resounding silence on Glebelands-related cases over the past four years continues to deafen while torturers and killer cops remain free.

We also want to know why are certain Glebelands cases still being heard at the Umlazi Magistrate’s Court?

Something clearly smells bad at that court and certain magistrates’ apparent reluctance to follow due process is not only cause for concern, but has likely caused further deaths of hostel residents.

Two examples are worth close scrutiny.

In November 2017 a suspect in a Glebelands attempted murder case, who had been positively identified by the complainant and who, at the time, also had four pending murder and attempted murder cases, for one of which a further warrant of arrest had been issued, was released unconditionally, in contravention of a previous court order, while forensic evidence was still outstanding, and without the knowledge or presence in court of the investigating officer who had been given a different court date for the suspect’s next appearance.

Application for reinstatement of the case — made as soon as the magistrate’s conduct was revealed — was delayed over the Christmas period. Meanwhile the suspect, on his release, had simply set about where he left off and was allegedly involved in a further two murders at Glebelands in January 2018. The suspect was rearrested several months later after having wasted considerable police resources, court time and of course, human life. Not that the latter seems to mean much to some Umlazi court magistrates.

Another case involves a female magistrate. On 3 February 2017 a hostel woman, Akhona Ngxokana was shot dead allegedly by a Block 52 man and Secureco Metsu guard, the company contracted by the eThekwini Municipality to provide private security at Glebelands where the suspect was both resident and deployed on patrol duties.

While one witness was murdered a week after Ngxokana’s death, another — the victim’s sister — bravely agreed to testify. As at least six Glebelands murder witnesses have to date been murdered, including one at the entrance to the Umlazi Magistrate’s Court, the woman’s fortitude and courage cannot be underestimated. She had been close to her sister and after the incident had to flee for her safety. Her life had been upended, she had lost her home and her sister and attended court under heavy police guard.

The case finally went to trial in November 2017. During proceedings it was reported that the magistrate repeatedly seemed to show undue bias in favour of the accused. When the sister finally gave evidence a few months ago, the magistrate asked her:

“Why are you accusing such a handsome man like this of killing your sister?” The sister left the court in tears after what appeared to be a blatant attempt to undermine her credibility as a witness and disparage — not only her testimony and character — but also the murder of her sister.

The magistrate’s comment displayed an astounding lack of sensitivity and grasp of the seriousness of the matter. From a gender perspective it is sexist that the testimony of a woman would (in the magistrate’s view, it seems) be swayed by the physical appearance of the accused, notwithstanding the fact he allegedly killed her sister.

The magistrate’s conduct does not encourage other witnesses coming forward, a difficult enough task as it is due to the security risks involved, and sent a powerful message to other Glebelands residents in court at the time — that they will receive little support from the court should they “do the right thing” and assist the state in giving evidence against dangerous killers.

Of further concern regarding this magistrate are reports that she allegedly receives regular visits from recently suspended KwaZulu-Natal regional court president Eric Nzimande, with whom “closed-door” meetings are apparently held, the subject of which other senior court officials remain in the dark.

Nzimande faces a string of charges including sexual harassment, and, according to media reports, for allegedly setting up a network of corrupt acting regional court magistrates across the province from whom he allegedly receives payments, including some allegedly linked to rhino poaching syndicates.

Coincidentally, “collections” were held at Glebelands old blocks shortly before both court debacles during which, it is alleged, large sums of money were illegally extorted from residents by friends and relatives of the Glebelands Eight. We do not know where that money went.

Repeated requests for lifestyle audits to be conducted on Umlazi court magistrates and investigation generally into goings-on at that court, continue to fall on deaf ears.

The most recently arrested Glebelands suspect will appear at the Umlazi Magistrate’s Court on Monday 29 October for a bail application. The Akhona Ngxokana murder case has been remanded to 13 November for judgment.

We must watch closely as the struggle for justice for Glebelands victims is clearly far from over. DM