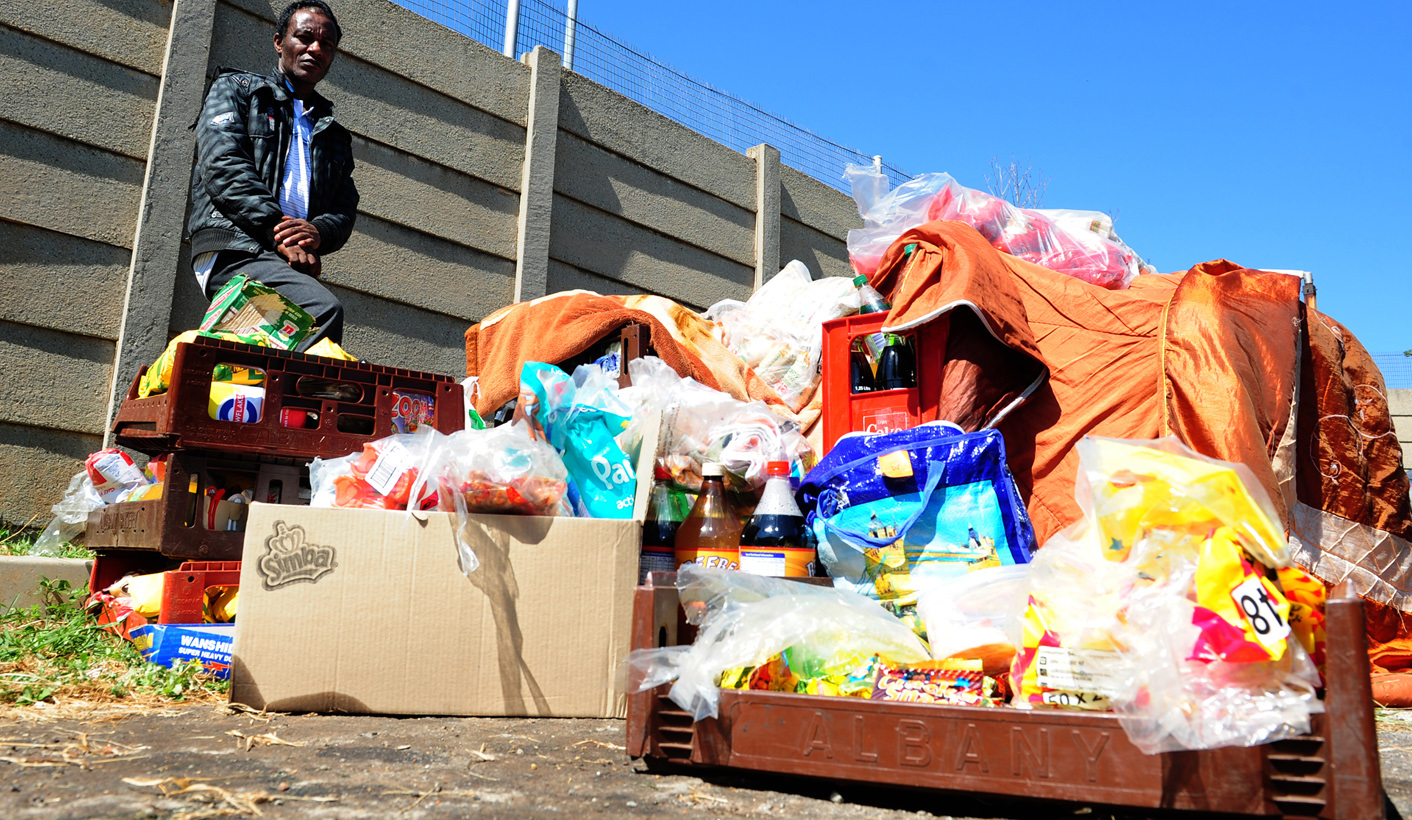 An Ethiopian man waits next to his stock for transport at the Moroka Police Station in Soweto on Friday, 23 January 2015. Picture: Werner Beukes/SAPA

Immigration has not been a key issue in South African elections, but that could change in 2019. The issue is ripe for populist campaigns and there's concern it might fuel the cycle of xenophobic attacks.

Ziyaad Mohammed recently returned to his spaza shop in White City, Soweto, almost two months after he and other foreign store owners fled amid looting and violence.

“I’m holding my breath because I don’t know what they might do next,” said the 26-year-old from Somalia. He fears for his safety but returned to provide for his family.

Three people died in the violent clashes in Soweto in August as locals looted foreign-owned stores after rumours spread that they were selling expired food.

Mohammed has reason to worry. Civil society groups are concerned that the cycle of violence, fuelled by anti-foreigner attitudes, might be amplified as immigration becomes a more prominent issue ahead of the 2019 elections.

Professor Susan Booysen, director of research at the Mapungubwe Institute for Strategic Reflection and a visiting professor at Wits School of Governance, said immigration issues did not feature prominently in previous elections, but that could change heading into 2019.

Immigration is one of five pillars of the Democratic Alliance’s (DA) election campaign and the party recently released its plan on securing the borders and stopping illegal immigration.

There’s little public opinion research on what matters most to voters in South Africa, but Booysen said the DA was likely tapping into a sensitive issue that many citizens care about.

“We know that the DA does election research quite meticulously and quite reliably,” she said.

The African Basic Movement, a new political party registered to contest the elections, wants most foreigners to leave the country. A consortium of civil society organisations has called on the IEC to de-register the party for using language that promotes violence.

“It is clear that politicians from almost every South African party, except to a very large extent the EFF, have upped the ante on migrants,” said Marc Gbaffou, chairperson of the African Diaspora Forum (ADF).

“We have already seen an upsurge in verbal, physical and property attacks on migrants of late, including in such previously untouched areas like Hillbrow, Berea, Yeoville, and Joburg, where what began as a genuine fight against drug peddlers, a fight we also supported as the ADF, has suddenly turned into a wholesale attack on migrants, including innocent tuck shop and bottle store owners of Somali, Ethiopian, Bangladeshi, Nigerian and Pakistani origin,” he added.

“We expect this unwelcome trend to escalate going to the elections next year,” said Gbaffou.

Amir Sheikh, chairperson of the Somali Community Board, claimed elections often come with an increase in xenophobic attacks. He said the DA and other politicians trying to highlight immigration challenges will likely fuel anti-foreigner sentiment ahead of next year’s elections.

The DA has been accused of taking a populist stance to win over voters who blame African migrants for taking jobs and fuelling crime.

The DA’s Johannesburg Mayor Herman Mashaba has regularly blamed poor migrants for the city’s challenges and misrepresented statistics on the number of undocumented foreigners living in the inner-city.

In September, the ANC’s police minister Bheki Cele and SAPS National Commissioner Khehla Sitole claimed 11-million migrants live in South Africa, despite different studies estimating the number to be between 1.6-million and 3.1-million.

The DA’s policy follows Parliament’s approval of the White Paper on International Migration, led by the ANC government, which has been criticised as anti-poor and anti-African.

The country’s economic woes and failure to tackle poverty, inequality and unemployment make clamping down on African migrants a potential vote winner.

A recent study by Didier Ruedin from the University of Neuchâtel on South Africans’ attitudes towards immigration found that: “Individuals in vulnerable economic situations and those lacking community support are more likely to oppose immigration. The subjective feeling that one is vulnerable and finds it hard to make ends meet is associated with negative attitudes.”

Landau told Daily Maverick the issues likely to dominate the election are the same as during the last 20 years: jobs, services and security.

“What we’re seeing is an effort from the political parties to distract us from their inability to deliver on those demands. This is where immigration fits the bill. It is not why people are poor or unsafe but it’s far easier to evoke an external threat than to do the hard work of fixing broken institutions,” said Landau.

He added: “What we are witnessing is a vicious cycle. By capitalising on widespread unease with immigration and diversity, the parties help naturalise divisions between South Africans and their neighbours.

“They are writing a script that absolves politicians of responsibilities. Immigrants now become the source of all social ills. While that is less problematic than blaming a single South African racial group for our problems, it’s a similar scapegoating strategy that does little to take us forward.”

Ncedo Mngqibisa and Azwi Netshikulwe, researchers from the University of Cape Town’s Safety and Violence Initiative, said politicians have no incentive to act on behalf of foreigners who are not eligible to vote and their comments can contribute to attacks.

“Unfounded negative political narratives about African migrants by powerful politicians dominates the public psyche and unfortunately these narratives are sometimes carried out by media without critical examination,” said Mngqibisa and Netshikulwe.

Gbaffou claimed that politicians are not only fuelling xenophobia but capitalising on it. “The attacks are a fertile ground for opportunistic politicians to claim that they’re doing something about migrants (after the same politicians planted the hate), thereby winning them prominence and votes next year.”

Academics and civil society groups agree South Africa has significant immigration challenges that need to be tackled, but they say the issues of unemployment, poverty and crime will remain even if migration issues are solved

“We strongly argue that what is needed in South Africa is not political parties that scrape the bottom of the barrel in their opportunist scramble for votes,” said the Civil Society Co-ordinating Collective in its complaint against the African Basic Movement.

Another store owner in White City, 23-year-old Enrique Riaz, from Bangladesh, recently returned to his shop after it was looted in August.

“Why should I be scared? I haven’t wronged anyone,” he said.

It’s still uncertain whether immigration will become one of the key issues heading into the 2019 election, but the political climate and government’s repeated failure to address the uniformed stereotypes on poor foreigners should give Riaz cause for concern. DM