DAVOS IN THE DESERT 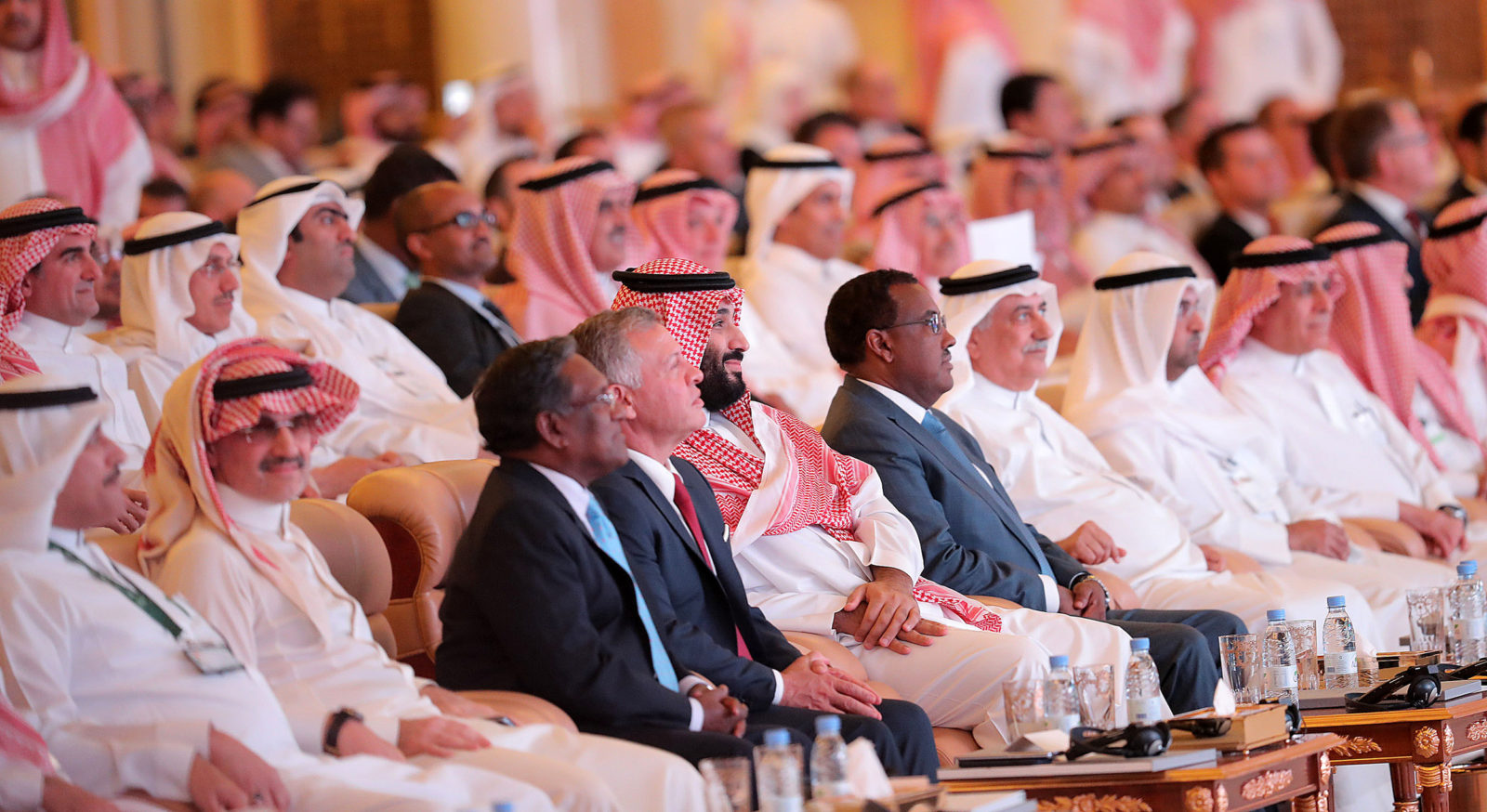 Tuesday saw the opening of Saudi Arabia’s much-touted Future Investment Initiative, dubbed ‘Davos in the desert’, amid an exodus of senior business leaders and politicians following the kingdom’s ongoing diplomatic furore over the murder of journalist Jamal Khashoggi. At least one high-profile South African CEO is reportedly attending, however, while both government and business leaders back home are shying away from the topic of a boycott.

Saudi Arabia’s Future Investment Initiative is billed as a platform for “doing business for good”.

But as the glitzy conference opened in Riyadh on Tuesday, it could not escape the shadow of the row in which Saudi Arabia is embroiled as a result of the murder of dissident Saudi journalist Jamal Khashoggi.

A speaker list of 150 has been reportedly edited down to 120, though details of the conference programme are sketchy – possibly as a result of the conference’s website being hacked on Monday to display criticism relating to Khashoggi’s disappearance.

Saudi media outlets were intent on hailing the conference as a triumphant success, reporting that so-called “mega-deals” totaling $50-billion were inked on the first day alone.

But the conference’s first speaker – Saudi billionaire Lubna Olayan – opted to address the elephant in the room head on, denouncing the Khashoggi scandal as “alien to our culture and DNA”.

At the time of her remarks, Saudi Crown Prince Mohammed bin Salman was not yet in the room. When he arrived later, however, the New York Times reported that he was given a standing ovation.

Information about South Africans attending the event has, perhaps unsurprisingly, been hard to come by.

In past years, a logical guest would have been Saudi Arabia South Africa Business Council chair Iqbal Survé, head of Sekunjalo Investments. Dr Survé told Daily Maverick on Tuesday that he was no longer the council chair, however, although the council’s out-of-date website appears to still be hosted by Sekunjalo.

On the side of government, State Security Minister Dipuo Letstatsi-Dupe was among those supposed to be attending the conference before President Cyril Ramaphosa reportedly pulled the plug on the trip at the last minute.

Letstatsi-Dupe was also scheduled to meet with the head of Saudi crime intelligence, Khalid bin Ali al Humaidan, to discuss “issues of mutual interest”. The Presidency has made no statement on the reason for cancelling her trip.

Department of Trade and Industry spokesperson Sidwell Medupe told Daily Maverick that “nobody from DTI” is attending the conference – but he was at pains to stress that the reason for non-attendance was not connected with the Khashoggi murder.

“We don’t go there because it’s clashing with our conference,” Medupe said, in reference to Ramaphosa’s International Investment Conference which is scheduled to take place in Sandton from Thursday.

Business Unity South Africa took a similar line on the matter when contacted by Daily Maverick.

“BUSA did not plan to send a delegation to this conference given the timing and the fact that it was scheduled to take place during our South African Investment Conference,” BUSA CEO Tanya Cohen said.

“We are not aware of any BUSA leaders attending the conference, but there may be business people that have decided to attend in their independent company capacities.”

One such individual is reportedly Investec co-CEO John Green, who CNN included in a list of international executives still attending “Davos in the Desert” despite boycott calls.

CNN reported that it based its list on “the latest information available from conference organisers and companies”. Investec had not responded to Daily Maverick’s request for comment on Green’s attendance by deadline.

Business Leadership South Africa (BLSA), meanwhile, has been silent on the topic of the conference – despite the fact that the body has previously taken strong stances on other political issues. In January 2018, CEO Bonang Mohale encouraged delegates to Davos to boycott Donald Trump’s address to the forum on the basis of Trump’s remarks about “shithole” countries in Africa.

Seemingly the only South African executive to take a public stand on the Saudi conference thus far has been Sygnia CEO Magda Wierzycka. She tweeted: “Decided not to attend the Saudi Arabian ‘Davos in the Desert conference’. We must support free media even if through small gestures”.

Business between South Africa and Saudi Arabia is booming, with bilateral trade between the two countries reaching R55.4-billion in 2017, according to DTI figures.

And while the Department of International Relations and Co-operation (Dirco) released a tepid statement on 17 October expressing “concern” about the disappearance of Khashoggi, it appears that government is cautious of rocking the Saudi boat too much in the face of a promised $10-billion investment from Riyadh.

Medupe could not confirm how many Saudi delegates were expected to attend the local conference, but he said that it was likely that Saudi investors in South Africa’s energy sector would attend.

“This is not government to government; it’s based on investors,” Medupe insisted.

In Saudi Arabia, however, the distinction between individual investors and government is often hard to discern. The Saudi Arabian Military Industries firm – which is reportedly in talks to buy a chunk of Denel – is an initiative of the Saudi Public Investment Fund, for instance.

Yet if the South African government and private sector are revealing a wariness to step on Saudi toes, the same cannot be said for other spheres of South African society.

Veteran arms deal campaigner Terry Crawford-Browne is one civil society figure who has been vocal in his condemnation of the proposed Denel deal, while individual leaders in the local Muslim community have also come out strongly against Saudi Arabia’s recent actions.

In a khutbah (sermon) delivered at the Claremont Main Road Mosque last week, Imam Rashied Omar called on the public to apply pressure to the South African government to “speak out against human rights violations committed by the Saudi monarchy”, and suggested that local Muslims considering undertaking voluntary pilgrimages to holy sites in Saudi Arabia should be “gently discouraged” from doing so.

“If many people begin to adopt such a protest action of not undertaking voluntary hajj and umrahs as long as the Saudi monarchy continues its war mongering in Yemen and elsewhere in the Middle East, the despotic regime will begin to feel the pressure both financially and morally,” Omar said.

These are sentiments yet to find echo from South African government or business: likely to be as a result of significant financial entanglements with Saudi Arabia.

But those hoping that boycott actions against the kingdom could prompt a greater adherence to human rights from Riyadh may be disappointed.

Thus far, it appears that even the boycott of “Davos in the Desert” by high-profile CEOs may have been more symbolic than authentic. Journalists at the conference on Tuesday reported that many international firms had simply opted to send anonymous mid-level executives instead.

The New York Times reported: “Many bankers kept their name tags obscured behind their ties or decided that this was not the year to speak to news media.” DM