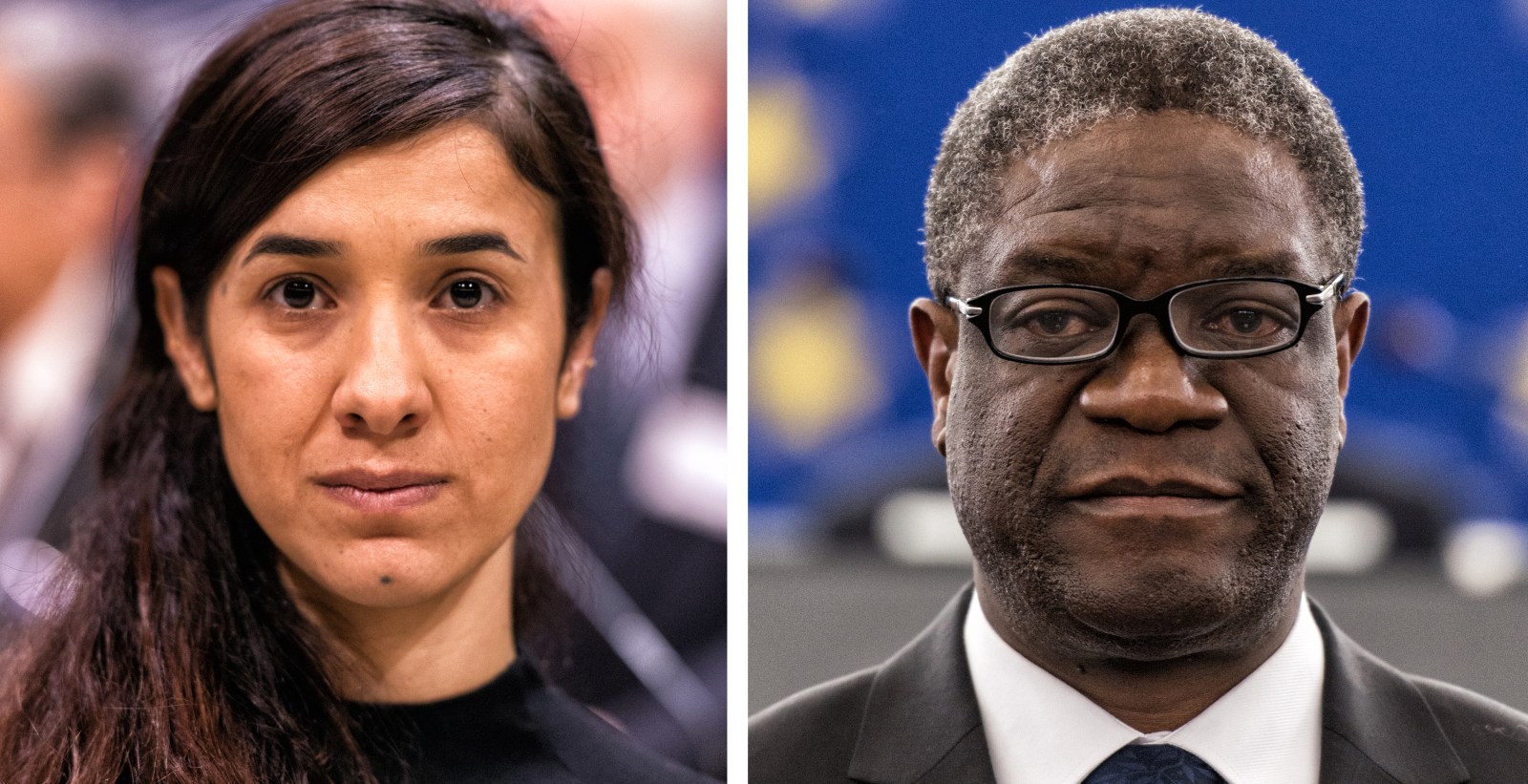 Nadia Murad Basee Taha and Denis Mukwege are this year’s winners of the Nobel Peace Prize. We certainly would like to add our voice to the chorus of women and men, especially those who are engaged in the struggle against violence against women and children, across the globe who have sung the praises of these two activists.

As our country and the world come out to hold perpetrators of violence against women and children accountable, the models that Murad and Mukwege serve as well as their receiving of this illustrious prize indicates a groundswell in support of challenging and changing the patriarchal paradigm.

Nadia Murad, a Yazidi, is a human rights activist and survivor of sexual slavery by the Islamic State. Yazidis are a Kurdish religious minority in northern modern-day Iraq. In particular, Murad is a champion for the rights of her community in Iraq as well as for the rights of women and refugees. She has told her story of how she was captured, enslaved and raped by Isis fighters in Mosul in 2014.

Today she heads an organisation by the name of Nadia’s Initiative which helps women and children victimised by genocide, other mass atrocities and human trafficking to heal and rebuild their lives and communities. When Murad was appointed United Nations Office on Drugs and Crime goodwill ambassador for the dignity of survivors of human trafficking she indicated that when she was captured by Isis more than 6,700 Yazidi women were also taken prisoner that year alone. She was only able to escape her captivity when her captor left the house unlocked. Today she lives in Germany.

In 2015, Murad presented the first ever presentation to the United Nations Security Council on human trafficking. In 2017, through Crown Publishing Group she was able to publish her memoirs “The Last Girl: My Story of Captivity, and My Fight Against the Islamic State”.

The eleventh African to be awarded the Nobel Peace Prize and the first Congolese, Denis Mukengere Mukwege, is a gynaecologist by profession. Having founded Panzi Hospital in Bukavu, he specialises in treating women who have been raped. Mukwege first worked as a paediatrician in the rural Lemera Hospital also in Bukavu and then decided to study gynaecology and obstetrics after identifying the dire need for these services. He is said to be a leading expert in repairing injuries of rape.

It is estimated that nearly 90,000 women have gone through the doors of Panzi Hospital for treatment. Often these women would come to have reconstructive surgery as their rape and genital damaging had been an act of war. As a champion for women’s rights, his UN speech in 2012 condemned both the governments of the Democratic Republic of the Congo as well as other countries for not doing enough to prevent these wide scale atrocities against women.

The citation to the award for these two recipients of this year’s peace prize reads: “…for their efforts to end the use of sexual violence as a weapon of war and armed conflict…”.

In 2014, the prize was awarded to Malala Yousafzai and Kailash Satyarthi for their fight for the rights of children and young people, especially the right to education. But Marud and Mukwege join only a handful of recipients who were awarded the prize for their championing of women’s rights and the first for their fight against sexual violence in particular.

Not again until 2003 was the prize awarded to someone who was championing the rights of women and this time it was to the Iranian Shirin Ebadi, who focused both on the rights of women and children. The last recipients to receive the prize for women rights were Liberians, the former president of Liberia, Ellen Johnson Sirleaf and Leymah Gbowee as well as Tawakkul Karman from Yemen who jointly shared the prize in 2011. Hitherto the prize has been awarded to 104 individuals and only sixteen have been women.

The awarding of the prize has once again come at a very particular time when the plight of women and children has come again to the fore. Women, and some men, are simply just not satisfied with the status quo and, so like Murad and Mukwege, they have dedicated their lives to the cause and upliftment of women.

One may argue that when the peace prize was first awarded to a woman for the championing of woman’s rights in the 1930’s and 1940’s, this had been at a time for a particular phase in the emancipation of women. Women’s suffrage, for example, was only granted in the late nineteenth century in a limited way in a few countries. Yet Finland, the first European country to grant women the right to vote, only did so in 1907. In the US, it was only in 1920 and in the UK only in 1928, for those over 21 years. In other words, it was in particular for political rights during this period.

However, as we see again with the resurgence of the prize going to women for women’s rights in 2011, now is the period where we are particularly addressing the socio-economic rights of women and, as the latest prize exemplifies, the fight against sexual violence. We in South Africa know too well the grievous scourge suffered by our women, young girls and girl children and even sadly babies through their sexual exploitation and violence meted out against them.

Globally and in particular in the United States we have seen the rise of movements such as the #MeToo campaign. Yet the “me too Movement” was started by a Black activist, Tarana Burke, in 2006 already, in poor, African-American and Latino areas in New York. The movement sought to raise awareness and understanding about sexual violence within these communities and today is said to do outreach to schools and provides educators with resources for this type of awareness.

The Left has always had the ability to shake the edifices of the pillars of the ruling class. This is what is needed once again in this paradigm shift against patriarchy. What Tarana Burke was not able to do, because of her race and class, was to catapult her awareness nationally and internationally. Now that the fight has been taken even into the homes, hotels and offices of the ruling class, whether in Washington or in Hollywood, a decade later there is a new feistiness in fighting this fight.

However, where does this leave the Black working class woman and girl child in South Africa? Indeed, the time has come whereby women in spaces of privilege can stand up and take the fight of women and child abuse into the boardroom, the ballroom and the bourgeois bedroom.

Whilst we must never forget the women and children who suffer daily at the hands of perpetuators and who are vulnerable precisely because they are poor, destitute and working class, we must encourage those women who are champions in their industry, in the field and leaders in society to come out and say “me too”.

The Nobel Peace Prize committee has once again shone the spotlight on the global fight against sexual violence against women and children. As South Africans, we must keep focussing on this fight too and not make normal this horrendous situation. As history has taught us, we women have it within our power to claim our rights and to make them a reality! DM