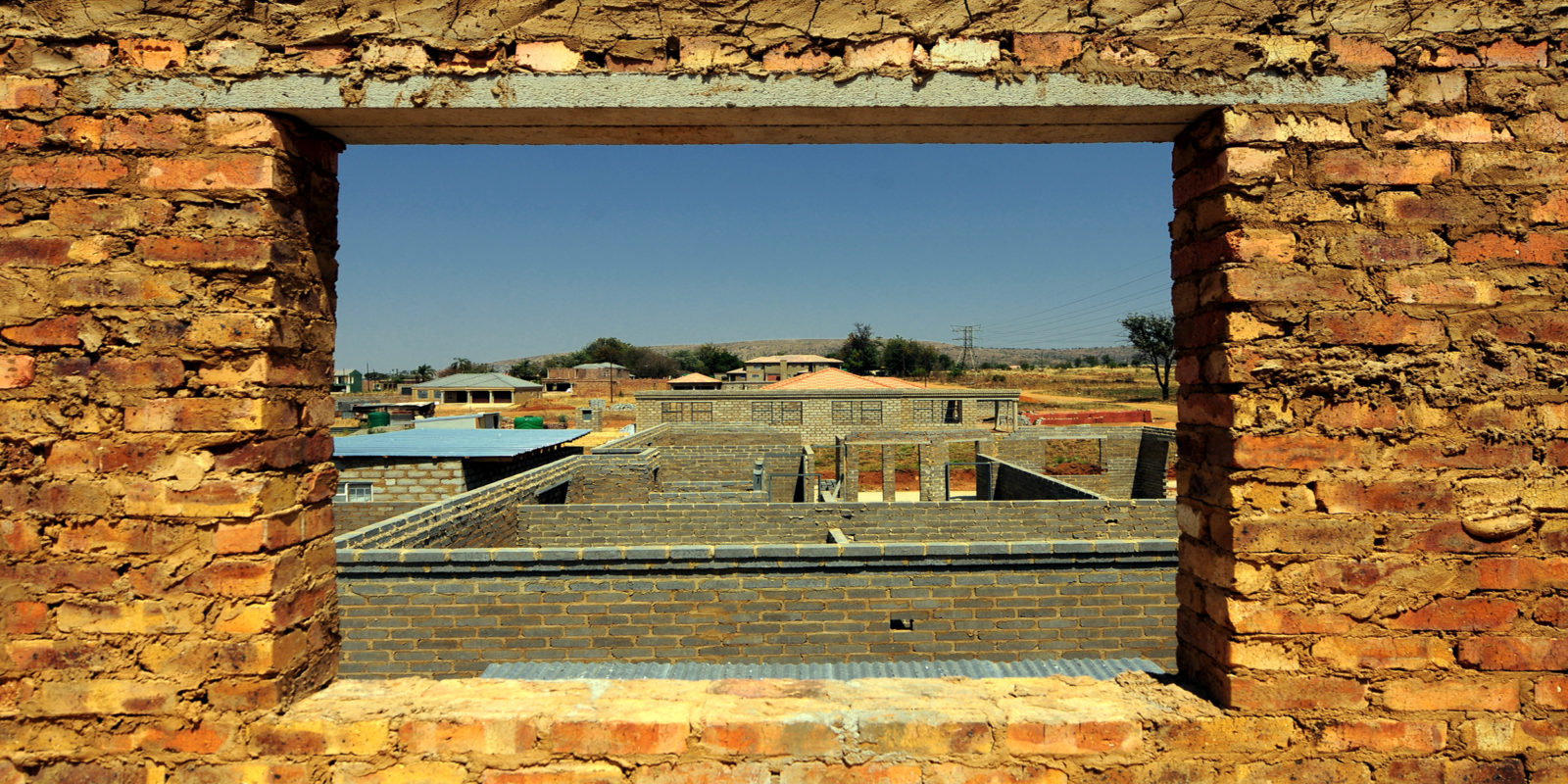 PRETORIA, SOUTH AFRICA – SEPTEMBER 25: The Leeuwfontein Heights housing development, near Mamelodi where residents have been buying stands which have been put up for sale as far back as three years ago on September 25, 2018 in Pretoria, South Africa. Many black families have reportedly been tricked into buying land on a farm only for the stands to be later resold to other people – many times. (Photo by Gallo Images / Sowetan / Sandile Ndlovu)

Those of us who believe that constitutionally entrenched democratic rights and equality under law are an essential part of ensuring racial justice in South Africa need to find better economic answers soon. And land reform for the poor is a good place to start.

The debate about the expropriation of white-owned land without compensation is about much more than the method of land reform.

It is also a debate about the place of the Constitution in our democracy, and what it means to be a South African.

Most importantly, it requires us to think again about how we deal with the legacy of colonialism.

This has become especially clear in the aftermath of the publication of the Mbeki Foundation memorandum about Land Expropriation without Compensation and the responses to it from within the ANC.

Most of the comments in the media have focused on the foundation’s assertion that the ANC appears to have lost touch with its commitment to “non-racial” politics. South African liberals had a field day, relishing what appeared to be the spectacle of the ousted president (if it was indeed he who wrote the memo) chastising the movement that had rejected him.

Mbeki’s opponents within the ANC soon had the opportunity to do some chastising in return. In a riposte published in City Press, for instance, ANC NEC member Malusi Gigaba roundly rejected the Foundation’s “pamphlet”, suggesting that it did not take seriously the economic plight of black people, and that it focused on “minority fears” instead of legitimate “majority grievances”. Instead of the ANC’s vision of radical economic transformation, Gigaba argued, the Mbeki Foundation was suggesting that black people should “merely be content with civil rights”. Furthermore, Gigaba argued, the pamphlet committed the grievous error of confusing mere matters of method with questions of purpose and principle. Expropriation without compensation is merely a tactic in service of what should be the real issue: radical land reform in favour of the black majority.

It seems to me that both Gigaba and the liberals’ reading of the Mbeki Foundation memorandum are incorrect.

The memorandum’s argument is about much more than the legacy of non-racialism. It is an argument about the economic underpinnings of South African democracy. Its argument concerns not only the “racial” character of land reform and nation building, but also what Marxists would call its class character: will it merely be a vehicle for elite enrichment, or can it genuinely serve the needs of the poor and marginalised?

The core of the Mbeki Foundation memo consists of a long and detailed (some would say pedantic) discussion of the connection between the politics of land reform and the nature of the “national democratic revolution”, all couched in the distinctive and highly specialised jargon of Congress discourse. Many of the subtleties would probably be lost on those of us not deeply schooled in the niceties of “colonialism of a special type” and “two stage revolutions”, and the ANC’s supposed historic mission as a revolutionary “parliament of the oppressed. But the central argument is quite clear.

The memo argues that while the need for land reform arises from the injustice of colonial conquest and land dispossession, this injustice needs to be rectified through a progressive process of economic transformation, inclusive development and democratic change.

In a rather pointed passage, the foundation argues that it is, for example, not enough for a liberation movement to kick out the colonial power and replace it with a military dictatorship ruling in the name of the people. Formal independence is not enough. Real freedom depends on a democratic resolution of the national question. Genuine liberation for the formerly colonised requires a democratic, accountable government committed to serving the interests of the people as a whole, and able to create economic policies that will benefit the many, not the few.

According to the view espoused by the Foundation, land reform in service of the interests of the impoverished black majority is indeed important – but only if it is aligned with a democratic approach to “the national question”. Land reform is not an end in itself; rather, it needs to be in service of inclusive, broad-based economic growth.

Consider the contrast with Gigaba’s vision. In terms of his argument, the purpose of land reform is simply the restoration of the status quo ante: putting the land back in the hands of the black majority who were dispossessed under colonialism.

As the Mbeki Foundation memo points out, this approach to the land question carefully skirts any mention of the class dimension. Who should benefit from land reform? The black majority. But who represents this black majority? Who precisely should be targeted, and how? Within the terms of Gigaba’s argument, that is a silly question. Any black person, no matter how rich, is a legitimate beneficiary of land reform. The class content of land reform does not matter.

At the heart of this disagreement are two deeply different approaches to the national question. Both approaches begin with a recognition of the injustice of colonialism and the need to create a just postcolonial order. The question is: what is the nature of this postcolonial society? The ANC’s traditional answer used to be that South Africa belongs to all who live in it. In place of an order based on marks of ethnic, religious, linguistic or racial belonging, a new civil and legal order would to be created based on values of justice and equality. The nation is thus a political community, based on the legal fact of citizenship, a joint commitment to democratic values, and a shared determination to undo the injustices of the past.

In this vision, race and identity clearly still matter. The material and spiritual legacy of apartheid cannot be denied. (This is what sets the Mbeki Foundation’s view apart from orthodox liberalism. It is not an argument for being content with civil liberties. Rather, it is an argument that participation in a rule-based democratic order should be used as a vehicle for equitable change.) Such a vision of South African identity is not colour blind. But your racial or ethnic identity is not the basis of your worth as a citizen.

What is at stake here is the principle of the ultimate entitlement of every citizen — regardless of race, gender, sexual orientation or religious affiliation — to dignity and equal treatment under the law. Although the memorandum does not say it in so many words, one of the things it makes clear is that the really important aspect of Section 25 of our Constitution is not whether or not it allows compensation to be set at zero. Rather, what matters are those three little words just and equitable: the promise that everyone in our country, no matter who or what they are, are entitled to equal and fair treatment under the law.

Gigaba’s vision is very different. While he argues that his view of land reform does not involve a rejection of the Freedom Charter’s inclusive vision, this appears to be lip service. In this picture, the South African nation is not a political community held together by a shared, if painful history, and a commitment to transformation. Rather the real South Africans, the ones who matter, are the black majority, Africans in particular. They are the ones who really belong here. In this view, ensuring “total emancipation” through land reform is seen as the precondition for non-racialism. Give us our land first, this argument goes, and then we can talk about who has which rights.

It is tempting to simply choose sides here. But history shows that this issue is too important for that.

On the one hand, while Gigaba’s arguments may be politically and emotionally appealing, they leave too much out. The track record of nationalist regimes in the postcolonial world is a sorry one. All too often, the Gigabas and Shivambus of the world have enriched themselves at the expense of the poor, and used their contempt for “mere civil liberties” to trample the democratic rights of the people in whose name they govern. The unfolding saga of the State Capture enquiry shows just how easy it is for opportunistic politicians to dress like revolutionaries and eat like capitalists.

But, if truth be told, the track record of liberal democracy in the last 30 years has not been much better. The proponents of the Third Way at home and abroad have suggested that we could make markets work for the poor, enlisting free-market policy frameworks in service of goals of broad-based development. Today, living in the aftershock of the 2008 meltdown, with austerity biting down everywhere while the world’s richest people just get richer, that doesn’t sound very convincing either.

Those of us who believe that Constitutionally entrenched democratic rights and equality under law are an essential part of ensuring racial justice in South Africa need to find better economic answers soon.

Andries du Toit is director at the Institute for Poverty, Land and Agrarian Studies, UWC