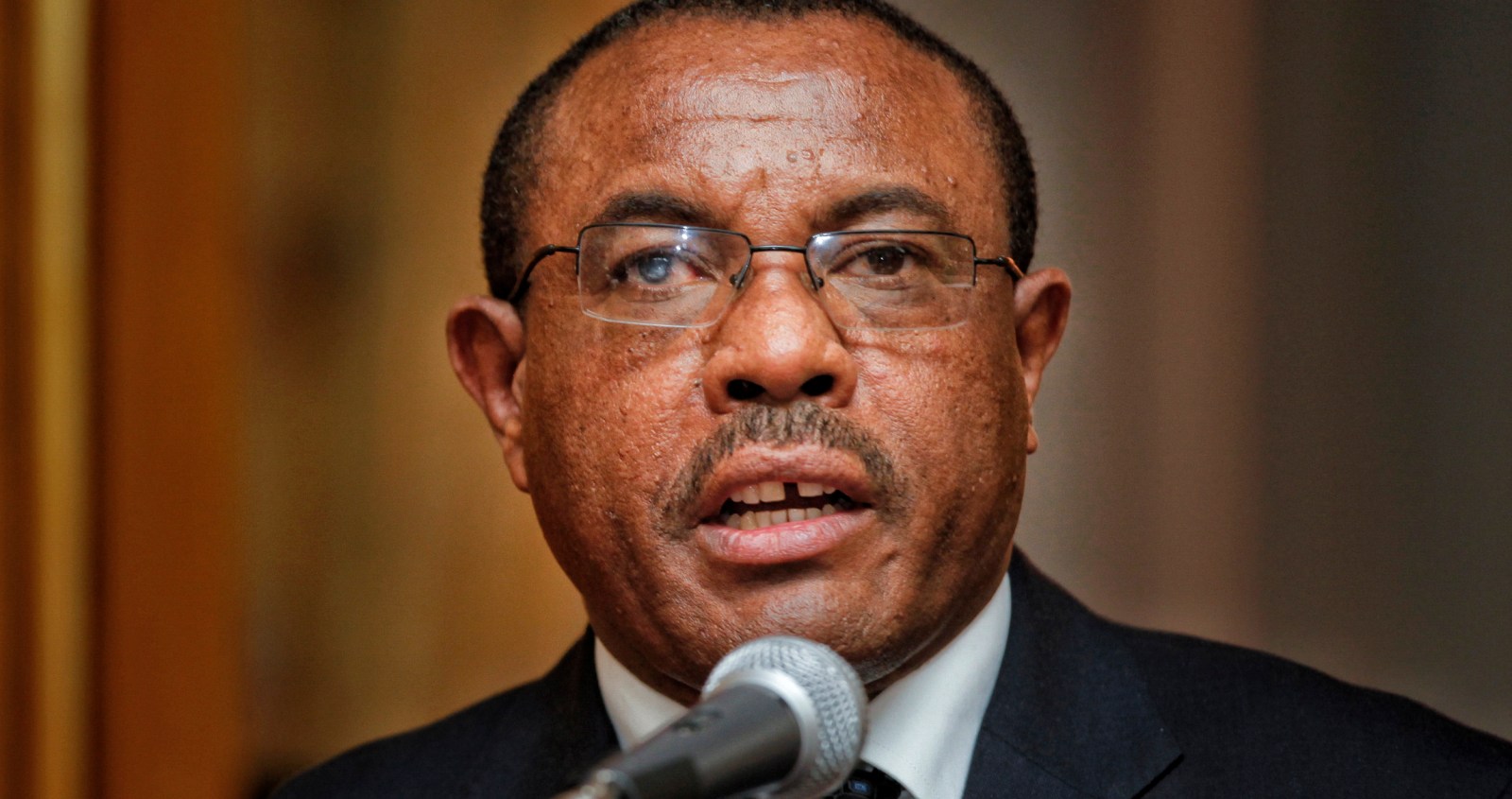 epa06528195 (FILE) - Hailemariam Desalegn, the Prime Minister of Ethiopia, speaks during a joint press conference with Japanese Prime Minister Shinzo Abe (not seen) after their meeting at the Presidential Palace in Addis Ababa, Ethiopia, 13 January 2014 (reissued 15 February 2018). Local media report said on 15 February 2018 that Desalegn has tendered his resignation from his post and the chairmanship of Ethiopian People's Revolutionary Democratic Front (EPRDF) party. EPA-EFE/DAI KUROKAWA

There is a myth that political leaders must weigh up the importance of protecting our planet against the immediate short-term needs of our citizens. We must expel this idea that these two are mutually exclusive. We now know it is not only possible to achieve the short-term needs of a country’s citizens without sacrificing long-term environmental protection measures, but in fact by tackling the environmental challenges facing us we can also increase living standards both now and in the future.

Since stepping down as Prime Minster of Ethiopia in February this year, I have had time to reflect upon my spell in office and consider the future of my country without the daily pressures of being in power.

During this period of reflection, I have focused my attention on critical issues, including Ethiopia’s role in protecting our planet. There is a myth that political leaders must weigh up the importance of protecting our planet against the immediate short-term needs of our citizens. We must expel this idea that these two are mutually exclusive. Indeed, we now know it is not only possible to achieve the short-term needs of a country’s citizens without sacrificing long-term environmental protection measures, but in fact by tackling the environmental challenges facing us we can also increase living standards both now and in the future.

Take rainfall for example. Over the past century, declining rainfall is thought to have reduced GDP across Africa by up to 40%. For a country like Ethiopia, which aims to reach middle-income status by 2025 and relies heavily on its agricultural outputs and budding tourism industry, these numbers served as a stark warning for our government.

In addition, we’re losing species across the world at 1,000 to 10,000 times the natural background rate, threatening the balance of our ecosystems in unprecedented ways. Although we might think this doesn’t affect us here in Ethiopia, the reality is this level of biodiversity loss will affect our food, water and medical supplies in a dramatic way, and directly impact on employment and wealth creation.

My predecessor, prime minister Meles Zenawi saw these figures for what they were, evidence of the impact of climate change and substantial habitat loss, but he also saw them for what they could be — an opportunity. An opportunity to choose a new, sustainable development model that offered Ethiopia a different path to middle-income status. A path that would avoid the pitfalls and negative side-effects that a conventional economic development path would lead to.

As a result, before his untimely death, prime minister Zenawi oversaw the development of our Climate-Resilient Green Economy Initiative (CRGE) and it was my great privilege to continue this work during my tenure as prime minister of Ethiopia. As a leading nation in the Horn of Africa we wanted to set an example, to show that it was possible to leapfrog to modern energy-efficient technologies and incorporate sustainable community-led initiatives that protect our natural resources, rather than draining them, in order to progress economically and socially.

It was obvious to me, as it was to my predecessor, that the wellbeing of our citizens depends on preventing the collapse of our natural heritage. Without our forests, our mountains, our deserts and our flora and fauna we risk losing the foundations of our society, our food sources and our water supplies.

In my new role as founder of the Hailemariam & Roman Foundation, I plan to make the protection and sustainable management of our natural resources and biodiversity my top priority through the sustainable and community-led expansion of our tourism sector.

If we look at some of our African neighbours, Namibia or Botswana for example, it is evident that by investing in our national parks, natural reserves and world heritage sites we can not only contribute to the protection of biodiversity for future generations, but also generate income and create much-needed jobs.

For example, in 2017 6.5% of Botswana’s GDP came from tourism, and in Namibia they are on track to reach 21.6% by 2025.What do they have in common? Both nations have committed to protecting 30% or more of their land — indeed Namibia was the first country to designate its entire coastline a national park. I would urge more African nations to follow suit and increase their efforts to protect important land marine habitats while being mindful of the communities who live in and around these areas of natural importance.

Ethiopia is home to immense ecological diversity and a huge wealth of biological resources, but we have not always safeguarded them and in many instances drastic damage has occurred, especially in natural high forests. As part of the CRGE we are addressing this, primarily through intensive reforestation, but we can go one step further by committing to protecting more land through community-led conservation areas and sustainable tourism.

We are one of the few countries in the world that has such an array of endemic species alongside a truly rich cultural heritage. Ethiopia is home to the mountain dwelling Gelada baboon, the striking Walia ibex and even the Ethiopian wolf — Africa’s most endangered carnivore.

In addition, we have eight Unesco World Heritage Sites, including the Simien National Park and Bale Mountains, which provide water for 12 million people across Ethiopia, Kenya and Somalia, in addition to 40% of our country’s medicinal plant species. These national treasures should be protected— and our citizens will reap the rewards for safeguarding these invaluable natural assets.

As my esteemed dear friend and our visionary reformist Prime Minister Abiy Ahmed has noted, in several speeches, tourism has great potential to be harnessed for sustainable development and job creation for our youth. Tourism is increasing, and the rationale for further protection of nature, habitats and biodiversity is clear to see in the figures.

If we continue to move forward with investments in our Climate-Resilient Green Economy Initiative, commit to the expansion and improved management of our national parks and increase community-led conservation as seen in Namibia and Botswana, Ethiopia’s diverse natural habitats will be able to provide us with not just food and water supplies, but greater employment opportunities. My prime minster has shown his commitment in spearheading climate-smart sustainable tourism by organising a corporation that focuses on tourism development.

However, this is not just Ethiopia’s burden to bear Globally we are facing a major biodiversity crisis. Just as late prime minister Meles Zenawi demonstrated bold leadership when he introduced the CRGE, and our current premiers demonstrated unwavering commitment, I too hope to demonstrate an unflinching commitment to protecting Ethiopia’s biodiversity for the sake of future generations and hope it will inspire my brothers and sisters in government across Africa to do the same. DM

Hailemariam Desalegn is a former prime minister of Ethiopia and board member of the Brenthurst Foundation.