Zakes Mda’s play ‘You Fool, How can The Sky Fall’ exposes our insatiable need for a leader 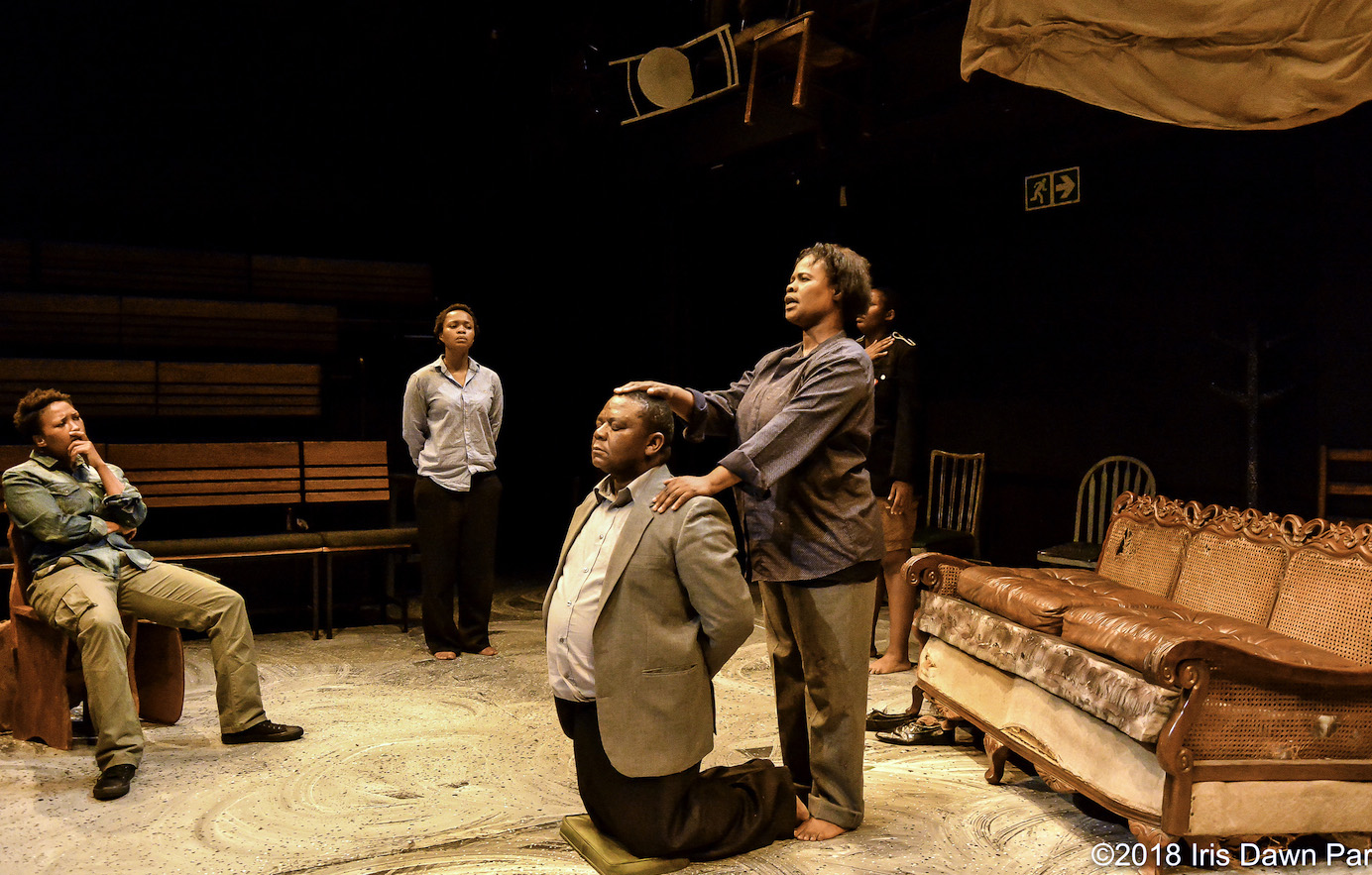 The Sky Cant all you fool. Photo by Iris Dawn Parker

It is evident that throughout history there have been far more bad leaders than good. Those who attempt to live up to the moral and ethical ideals of society are so rare that we cling to them feverishly when they appear, seemingly out of nowhere, to lead. And yet with so many bad examples of leaders and with the current zeitgeist of populism brought back by history’s cyclical movement, Zakes Mda interrogates the reason we keep searching, tirelessly, for a leader.

It is honest criticism that artistic director James’s Ngcobo’s current stage adaptation of Zakes Mda’s 1995 play, You Fool, How can the Sky Fall, currently showing at the Market Theatre, commits some minor plot errors, as it is “needlessly ambiguous” at times and the “gender-switched casting” makes the dialogue a bit confusing.

But what the play does so well is to display in full view the pretentious and corruptible nature of representative democracy, as well as expose our need to be led by someone — and often, anyone will do.

The play is set in an unnamed African country shortly after a revolution or a negotiated settlement — it is not clear, intentionally. And for the play to achieve its satirical criticism, Mda had to stage the drama in an abstract time and space.

The play is removed from any particular context to show universal human traits, both good and bad. And the leaders of this country all wear dirty and torn rags, with no shoes, to show the foolishness of their pretentious verbosity.

The themes discussed are frighteningly familiar.

There is a renewed hope across the land. These new leaders have taken the reins of government from… well, someone. All we know is that the previous administration was worse.

And so to gain legitimacy over this independent state, the new administration must ingratiate themselves to the citizens, subsequently adopt a “policy of benevolence” rather than use an iron hand to stay in power.

And so the show goes on. The president and his ministers imitate democratic values to maintain legitimacy. It’s a sham and we can all see it. Fake roads and houses are set up to impress the international community.

Veteran actor Molefi Monaisa brings a graceful and experienced presence on stage as the the Wise One, the president to whom all must be devoted. And as the father of this unnamed nation he is without question beyond reproach and must be universally adored.

His character seems to be an amalgamation of leaders we have had across many African states. As an audience member you often feel they are talking about Nelson Mandela, or maybe Robert Mugabe, sometimes it feels like it might be Jacob Zuma or Thabo Mbeki or none of them or all of them. Maybe this is the path that lies before Cyril Ramaphosa.

The resemblance, in all he does and says, to the leaders we know is uncanny and feels all too familiar.

When the president enters the stage, he walks about the room where ministers are waiting, and raises his torn pants to check the rotten wound, smelling it and then covering it up as though nothing is wrong. But his small limp is evident throughout the play.

Upon his entrance, his cabinet members are pleased to see him and then declare the meeting to have met quorum simply because he has arrived, even though not everyone is in attendance.

And the matters unsettling the nation are the “daughters of the revolution”, who are marching on the streets and feel that men have received all the rights post-revolution.

And another thorn to the cabinet’s flesh is a young man who does not seem to respect protocol, but sees through the facade of the revered leader.

Ultimately the forces of activism, resistance and popular movements become too much for a government of patronage and corruption. The cabinet collapses on itself through betrayal and self-interest.

What is most striking, however, is the president’s monologue when he finally meets his end at the hands of his own cabinet and longtime comrades.

“You like putting people on a pedestal,” he declares, as he jabs his fist into the air as an act of defiance to their indictment of his crimes.

“How fickle your commitment is to the gods you create,” he continued.

He then sits down on the floor of his jail cell, pulls up the trouser on his right leg and once again checks his rotten wound — a physical representation of his character faults.

Here is a president who believed the sky could not fall on him — as others believe the ANC will rule till Jesus comes back — or as another was president for close on 40 years across the border.

Someone like Mandela, who is seen as a global example of a great leader, come once in a generation if not a millennia. It is reasonable, then, why we celebrate such rare and brave souls who decide to swim against the tide of greed, hatred and corruption.

But these leaders sometime times do not come at all.

We then feel forced, to our own demise, to put in their place someone, anyone, whom we think comes close to embodying those principles that are best about ourselves; principles we admire and yet feel we cannot live up to except vicariously through this great leader, even when we have to pump them up ourselves.

But in earnest, isn’t outsourcing the task to pursue justice and organise society equality for all just another way to evade responsibility?

We create gods to do our bidding until we no longer need them, until they show they are human after all. And then we search for another. This is what You Fool, How can The Sky Fall, shows so succinctly. DM