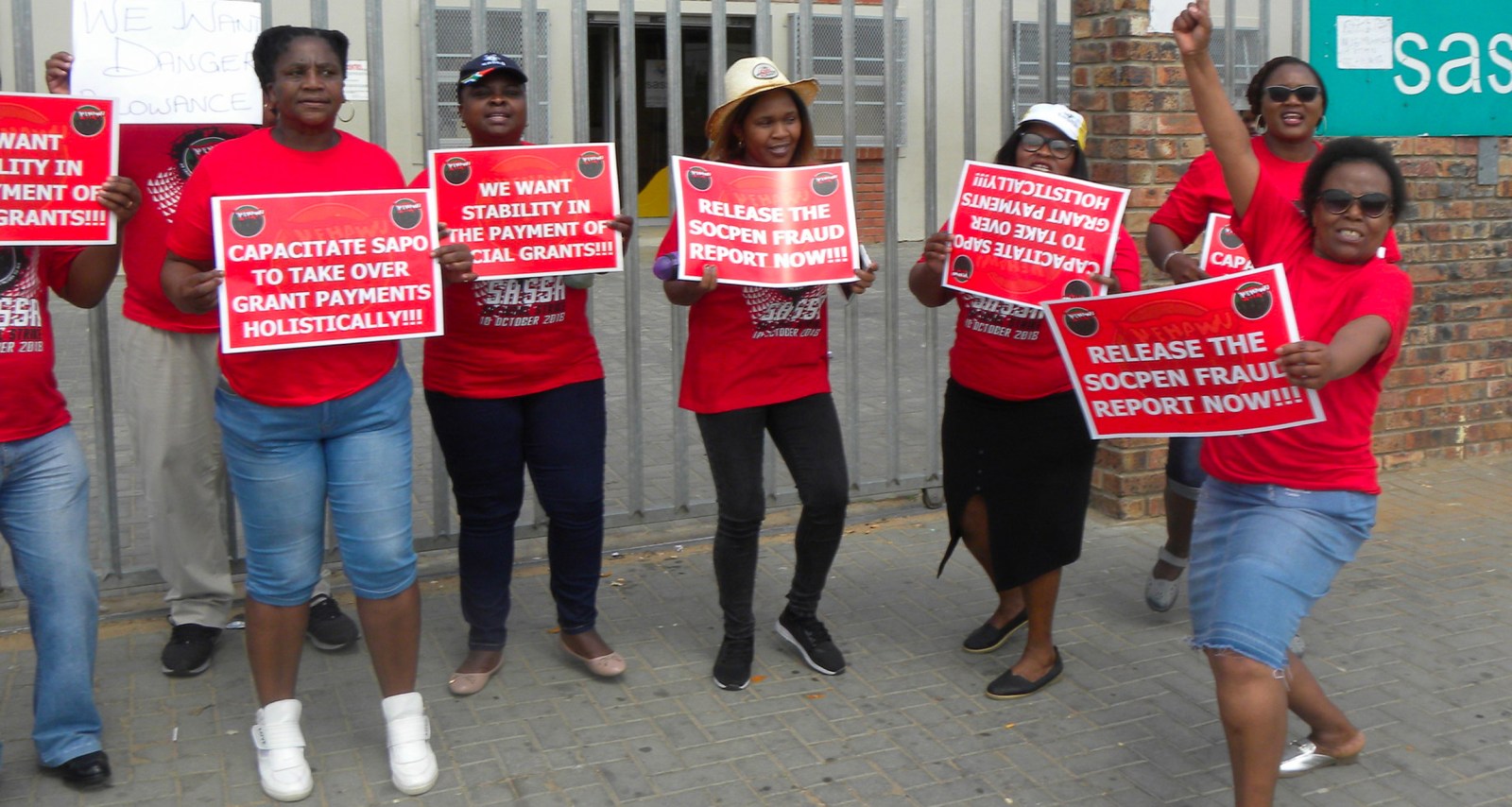 Susan Shabangu and Nehawu are reported to have agreed to suspend system, but union will only confirm on Thursday.

Thousands of South African Social Security Agency (Sassa) staff were expected to down tools and shut down offices across the country on Wednesday. However, while offices in the Eastern Cape did close, in much of the rest of the country it was business as usual for Sassa.

The mass strike action is by employees affiliated to the National Education‚ Health and Allied Workers’ Union (Nehawu). The union announced its intention to strike on Monday after negotiations with management at Sassa deadlocked in September.

The union has a list of demands, but the key one is that the biometric enrolment of beneficiaries be suspended. Nehawu Eastern Cape regional secretary, Khaya Madyibi, explained.

“When the Post Office took over from Cash Paymasters Services, government did not hire people to do biometric capturing. Instead it is being done by our members. They were never fully trained.”

Madyibi said said the machines used for capturing biometrics are often offline, forcing Sassa employees to travel to Home Affairs to do verifications in order to complete the applications.

On Wednesday evening, several news outlets reported that Nehawu and Social Development Minister Susan Shabangu had met and agreed to suspend the biometric system. But Madyibi said that the union would first inform its members on Thursday about the results of Wednesday’s negotiations and get their response, before confirming this. “The agreement is still a draft document that needs to be agreed upon by our members,” said Madyibi.

On Wednesday morning, GroundUp reporters visited several Sassa offices in different provinces. Despite calls by Nehawu for a national shutdown, it appeared to be business as usual at most of the offices visited. Only a few picketers were seen outside some offices.

In the Eastern Cape, a number of disruptions were reported, resulting in the closure of at least six offices.

In Port Elizabeth, all of the three Sassa branches were closed and beneficiaries were sent home. Groups of Sassa staff were seen with placards, singing outside the offices.

Madyibi said all the six offices in his region were closed, which included offices in Uitenhage, Somerset East and Graaff Reinet.

“This strike was long overdue. We approached the government last year with a string of grievances that we wanted resolved. Government did not respond positively to us.”

In Pietermaritzburg, dozens of Sassa officials went on strike. Protesting staff were also supported by Cosatu members. Employee Sanele Ndlovu said that staff were not being compensated for doing more work or working longer hours.

“The shortage of staff has caused a backlog in the department. Management makes decisions on their own without informing us. Senior employees don’t care about junior staff.”

Sabelo Khumalo said the new biometric system was introduced to prevent officials from committing fraud but it has been giving problems.

“The system has not been linked with all the workers. There are problems every day. We have raised these concerns but no one is listening.”

Nehawu regional secretary for Harry Gwala, Zimasile Giyama, said, “[Sassa] undermined the resolutions we agreed on. The introduction of biometric system was a bad move. The system is for the workers and social grant beneficiaries.

“Sassa is never going to have enough capacity to provide the equipment for the biometric system. This is going to give further problems to the beneficiaries. The most vulnerable grant recipients are getting affected every day,” he said.

Meanwhile, in Cape Town, about 15 protesters stood held the Eerste River office. A handful of protesters were also seen outside the Mitchells Plain office. Both offices were open and operating though.

Nelson Ngoma, has been working at Sassa as a grants administrator for six years. Ngoma said management has been “adding more work and changing systems, but are not engaging with workers”.

He said a job evaluation was needed to assess workload and adequate compensation for it.

“All we’re asking for is for them to engage fairly with us and compensate us fairly. The strike really hangs on whether or not management wants to engage us,” he said.

Sassa Western Cape spokesperson Shivani Wahab said a “contingency plan” was in place to ensure services continued and that beneficiaries still had access to their grants without disruption.

“No Sassa Office was shut down due to strike action. Sassa has partnered with the Post Office. This allows social grant beneficiaries to access their social grants via multiple channels (Post Office, merchants and banks), to ensure that we render accessible and efficient services to our clients,” she said.

Wahab said Sassa was committed to “ensuring that we find an amicable way of resolving any outstanding issues regarding the biometric process so that we continue providing our clients with quality services”.

The Ezakheni Sassa offices in Durban – which was mentioned by Nehawu as one of the offices where protests would take place – was operating as normal.

Sassa had not responded to questions about the closures of the Port Elizabeth and Pietermaritzburg offices by the time of publication. DM