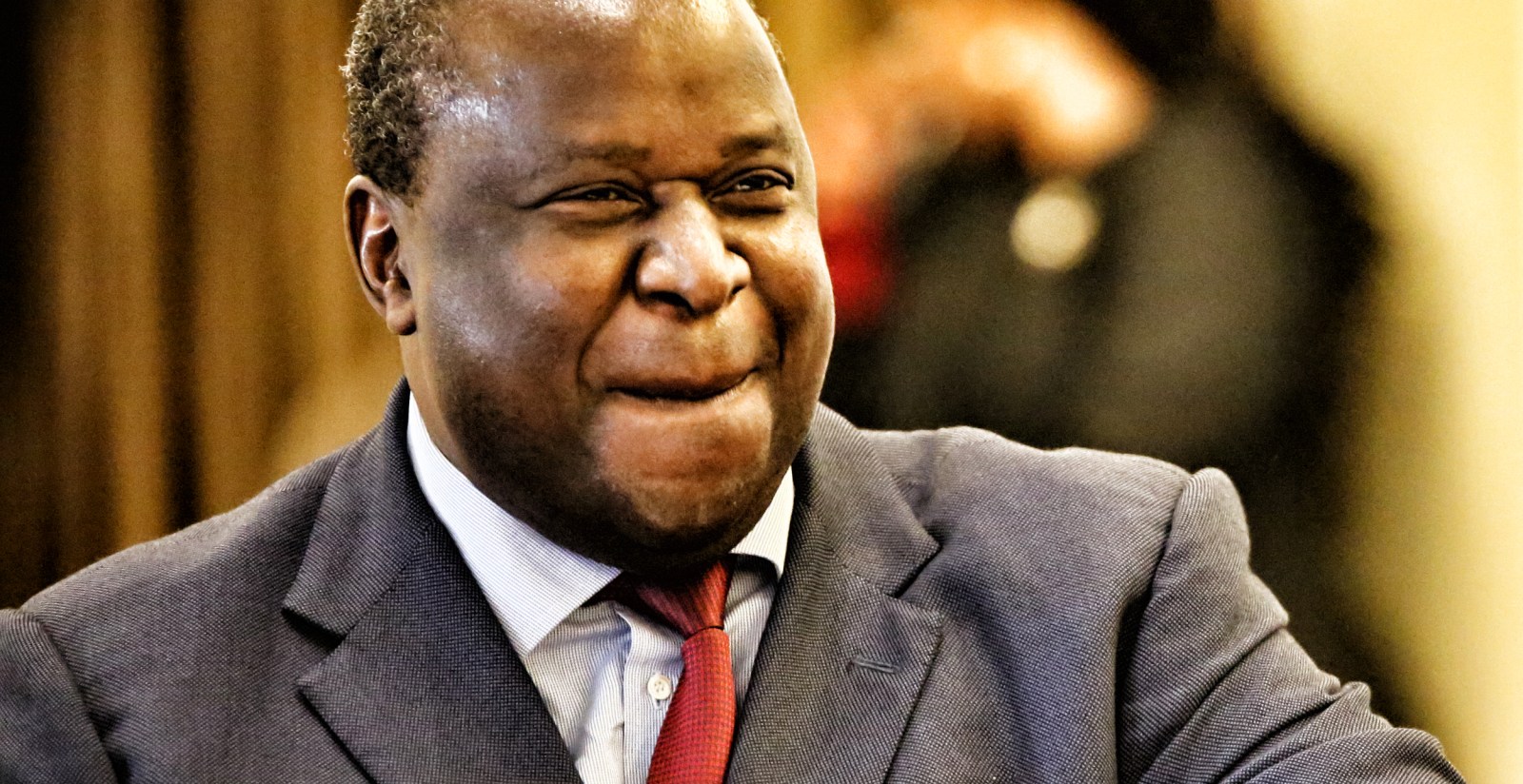 Market friendly. That was pretty much the first reaction amid a broadly welcoming response to the appointment of Tito Mboweni as South Africa’s fifth finance minister in three years. The former labour minister and South African Reserve Bank governor, who in recent years has pursued private business interests, told journalists shortly after his swearing-in on Tuesday at the presidential Tuynhuys offices at Parliament: “I think the president has taken away my freedom.”

Former finance minister Nhanhla Nene is understood to be the first ANC Cabinet minister to decide to fall on his sword and resign. That happened on Tuesday morning, in an official letter to President Cyril Ramaphosa, who accepted it in the “interest of clean governance”, after days of criticism and calls for Nene to resign or be fired for lying over meeting the Guptas.

It was a very different scenario to that of 23 September 2008 when then finance minister Trevor Manuel resigned alongside 10 ministers and three deputy ministers after then president Thabo Mbeki resigned following the ANC’s recall of him.

Many ministers then indicated that they believed there had been no other option because ministers served at the pleasure of the president, according to the Constitution. These ministerial resignations were effectively temporary as most, though not all, returned to work in Cabinet the moment the caretaker president had been appointed two days later.

“It is a measure of Nhlanhla Nene’s character and his commitment to the national interest that he has taken the decision to resign in the wake of errors of judgement, even though he has not been implicated in any acts of wrongdoing himself,” said Ramaphosa in first announcing he had accepted Nene’s resignation, and his decision to appoint Tito Mboweni as the new finance minister.

The former labour minister in the Mandela administration and South African Reserve Bank governor for a decade to November 2009, is a known to the markets – a key factor, given the headwinds South Africa has faced for some time amid international criticism of governing ANC instability and policy uncertainty.

“Mboweni will have the force of personality in government to re-establish National Treasury to a place it has not been in for some time, but this may cause some political headaches.

Some of his macro views have shifted over the years, and that would have to be watched, he said.

“Ultimately, the true test is if he will enable and defend National Treasury staff and in that we think he will be successful in this period of increasing economic populism.”

The political reaction was swift – and welcoming, if not necessarily warmly so.

EFF national spokesperson and MP Mbuyiseni Ndlozi welcomed Ramaphosa’s decision “to remove Nhlanhla Nene from the position of Minister of Finance following his unethical conduct of lying and misleading the public about his relations with the Gupta criminal syndicate”.

The EFF called on the president to apply the same principle to others in his Cabinet such as Home Affairs Minister Malusi Gigaba, Communications Minister Nomvula Mokonyane and Minister for Women Bathabile Dlamini, who had demonstrated “the same disregard of ethical conduct shown by Nene, and like Nene they too have undermined Parliament’s accountability mechanisms”.

Mboweni, the EFF said in its statement, had to “prioritise the interests of the people of South Africa, in particular the poor black South Africans…” and maintain the highest standards of integrity and ethical conduct.

The DA, which had also called for Nene to resign or be sacked, welcomed Tuesday’s developments.

DA finance spokesperson and MP David Maynier said that given Mboweni’s experience, he had “the advantage of being able to hit the ground running and is, at least, known to market participants, ratings agencies and international financial institutions…”

However, Maynier in his statement added that there were some concerns that should be clarified at the latest during the Medium-Term Budget Policy Statement (MTBPS).

“During the years that he was out in the political cold, he often came over on social media, at least, as a little looney posting content that seemed to be at odds with government policy.”

IFP national spokesperson and MP Mkhuleko Hlengwa in a statement said the change had come “when our economy more than ever needs capable, able and stable leadership”.

He experessed concern that Ramaphosa did not take this opportunity to fire Dlamini and Gigaba.

“We await an announcement on the abovementioned Ministers in due course,” said Hlengwa.

“We certainly hope that more ministers within the president’s Cabinet will submit themselves before the (Zondo) inquiry if they have met with Gupta family and how their meetings may have had an effect on government policy, plans or spending.”

“We have consistently been calling on the president to act with speed in instituting a commission of inquiry regarding the PIC. The Gupta scandal makes the exploitation of the PIC look like a Sunday picnic and the President should take immediate action so that the rot may be exposed.”

This was a refrence to, among other things, the Mail & Guardian report on Friday on how Nene’s son received finance from the Public Investment Corporation (PIC), which falls in the finance portfolio, for an investment in Mozambique. Work of this news emerged on social media as Nene was scheduled to appear before the Zondo commission.

When the report was published it seemed to add oil to the water following Nene effectively admitting at the Zondo Commission of Inquiry into State Capture that he had lied publicly about not meeting the Guptas, as he said in an eNCA interview in 2016.

The post-commission testimony apology Nene tendered on Friday did not go down well. He had said, “I deeply regret these lapses and beg for your forgiveness.”

And that set the political moves in motion that ultimately led to Nene’s resignation.

Black Business Council president Sandile Zungu in a statement said Mboweni was “the right person to steer the country out of the financial challenges that we currently face”, including implementing the stimulus package and job creation targets.

“Mr Mboweni has the credentials and experience to serve South Africa well in this position.”

South African Federation of Trade Union (Saftu) General Secretary Zwelinizima Vavi, speaking on eNCA, welcomed Mboweni’s appointment, and commended Nene for standing firm on opposing the nuclear deal. But the conflict over meeting the Guptas and the claims regarding Nene’s son’s business dealings and the PIC had made Nene’s resignation necessary.

Freedom Front Plus leader Pieter Groenewald said Mboweni must be given a chance.

“Now Nene’s prosecution should set the standard for the action taken against other government officials who are implicated in State Capture,” Groenewald said.

Cope, despite welcoming the move, decided to take it a step further. Given that “Ramaphosa’s Cabinet is littered with compromised and clearly corrupted ministers, the party is bringing a motion of no confidence in Cabinet in terms of section 102(1) of the Constitution”, said Cope leader Mosiuoa Lekota. It would be up to Parliament to accept and schedule such a motion.

The ANC’s alliance partners, the South African Communist Party (SACP) and labour federation Cosatu, welcomed Tuesday’s development as an indication of a presidency serious about clean governance, accountability and transparency.

“We wish the new Minister Tito Mboweni all the best in his new position. He has our support as workers and we hope that he can provide the necessary leadership to kick-start our flailing economy,” said Cosatu in a statement.

The SACP in turn in its statement said: “National Treasury must attach great importance to prudential management of our country’s resources and to selflessly serving our people, the majority of whom is the working class.”

For the ANC, Ramaphosa’s announcement that he had accepted Nene’s resignation was a tricky moment. Nene is regarded as being close to Ramaphosa and the “new dawn” project, but the former finance minister’s failure to disclose to the president ahead of his February 2018 appointment that he had met the Guptas, repeatedly, has broken trust in those circles.

ANC national spokesperson Pule Mabe told eNCA, “we (the ANC) recommend Comrade Nene for placing the country first”, describing his resignation as “a bold and timely step”. He welcomed Mboweni as “an accomplished executive, a leader, a stalwart…” and member of the ANC National Executive Committee (NEC).

“(Mboweni) will move the country forward because of his astuteness and experience.”

Outside Tuynhuys, Zizi Kodwa, the spokesperson for the presidency at Luthuli House, welcomed the “swift and decisive action” by Ramaphosa and thanked Nene for owning up to his error of judgement. Mboweni, he said, would hit the ground running.

And that means catching up with the MTBPS, or mini Budget as it’s colloquially known, that Nene had shepherded through to this stage.

There’s two weeks to go – and at this stage changes of any measures are highly unlikely. The MTBPS is expected to be a careful juggling act between tough cost cutting and stimulus in times of technical recession, with some crafty rejigging of financial allocations and savings from underperforming programmes.

But it will be Mboweni’s crucial test. And on Tuesday it seemed he knew it. His reaction to being appointed South Africa’s fifth finance minister in three years?

“Most important is to leave my freedom at home. Later, I’ll pick it up.” DM