US Senate confirms Donald J Kavanaugh ascension to the US Supreme Court, sentences country to his life, no parole 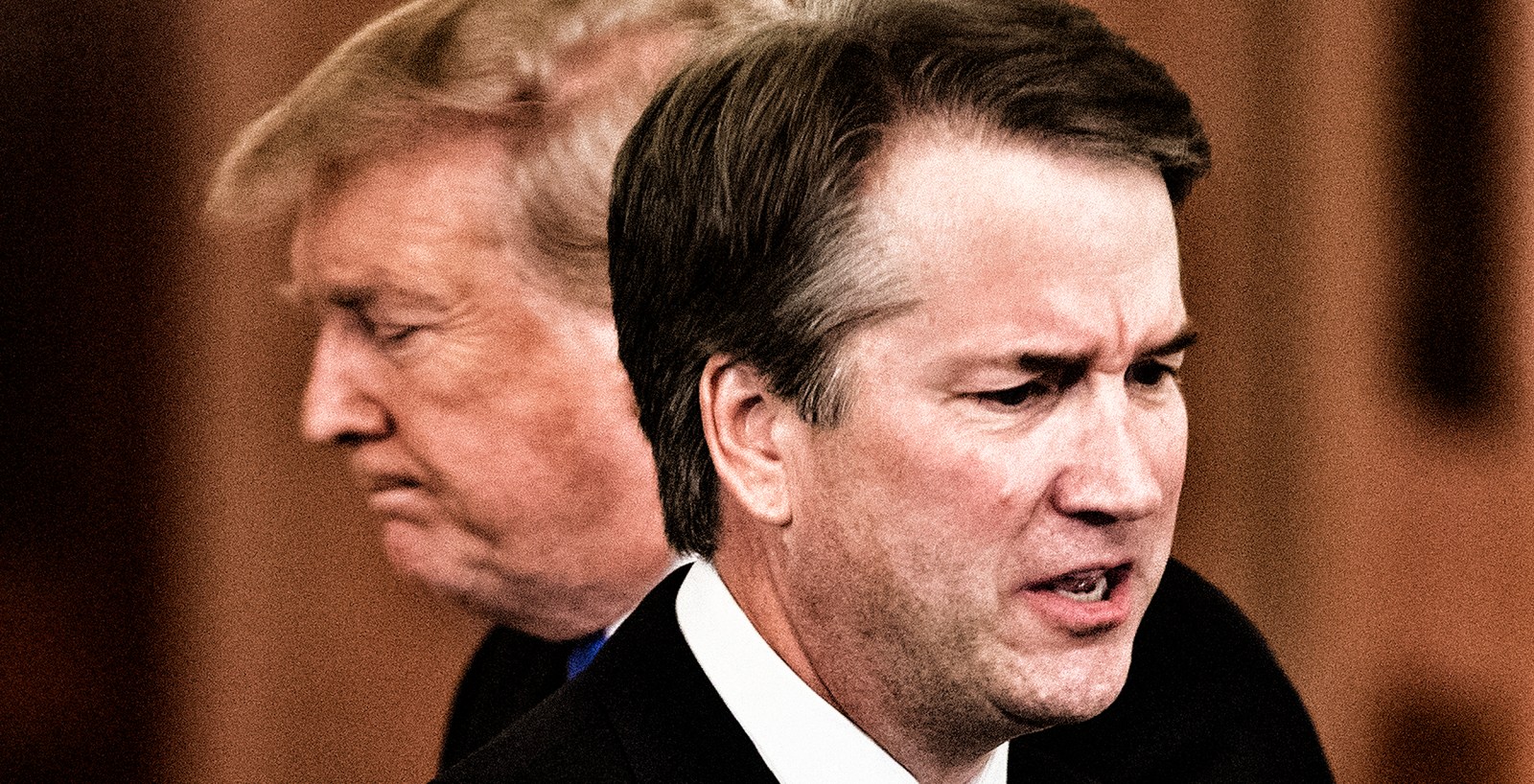 With Brett Kavanaugh’s confirmation as an associate justice on the US Supreme Court, the battle for the 2018 midterm election is now joined. And the divisions in the country are making things more dangerous for its political stability.

It has been an extraordinary week for American politics, American society, and, indeed, for the world. On the one hand, the Nobel Peace Prize has been given to two of the globe’s most inspiring heroes, Congolese gynecologist Dr Denis Mukwege and Yazidi human rights campaigner Nadia Murad, in their struggle against the brutal, dehumanising way armies (or rampaging armed mobs) have used rape and sexual slavery as a tool of warfare, designed to terrorise whole populations into submission. Concurrently, the Roman Catholic Church continues its semi-public agonies, all around the world, over how it deals with or ignores a wave of charges about the depredations of many paedophile priests.

And US First Lady Melania Trump was about to wrap up her nearly below the radar Africa trip. The visit was almost invisible, save for complaints about her choice of hats (wearing a pith helmet right out of White Mischief), her endorsement of US aid projects (a budget her husband has been trying to cut drastically), and her low-key encouragement of her near-Delphic “Be Best” campaign against cyberbullying. Her spouse has not been listening to that campaign, apparently, as he had become busy haranguing Christine Blasey Ford, the accuser of Brett Kavanaugh for sexual assault back in the 1980s. Brett Kavanaugh was Trump’s nominee for an open seat on the Supreme Court.

In the American Congress’s upper house – the Senate – a body often nicknamed the world’s greatest deliberative body (apologies to the British House of Commons), a monumental struggle over the nomination of federal circuit court judge Brett Kavanaugh to become an associate Justice of the Supreme Court came to an unsettling and acrimonious conclusion. In voting for his confirmation by the narrowest of margins – 50 to 48, plus one absent and one present – the Senate publicly demonstrated to the nation and the world that there is a vast chasm between two halves of American society. This is not simply one that splits Democrats from Republicans, or men from women. And the resulting fissure will have all too real implications for American electoral politics, as well as broader societal impacts.

Brought back to testify over charges of sexual assault, in riveting, although sometimes gag reflex-inducing television, Judge Kavanaugh delivered by turns a pugnacious, crying, combative, angry, totally-bought-into-the-alt.right-conspiracy-it’s-all-the-fault-of-the-Clintons, sometimes even uxorious testimony before the Senate Judiciary Committee. His words came after his sexual assault accuser Christine Blasey Ford had already delivered her own testimony. Ford’s words described an unwelcome sexual assault encounter, when she was 15 and Kavanaugh two years older, and initially garnered respectful reviews – even, surprisingly, from President Trump.

Nonetheless, some Republican senators and commentators quickly argued that her inability to pin down the precise date and place had made it less than crystal clear she had all her facts straight – or even that she had fingered the right culprit. With that, the defenders of Kavanaugh’s nomination let all restraint fly out the window by mid-week. Or, as the usually restrained Economist’s Lexington columnist called this transformative Trumpian moment: “From #MeToo to #Screw You”.

After an acrimonious debate within the Senate committee considering his nomination, the committee members accepted a proposal from Arizona Republican Senator Jeff Flake to postpone a final committee vote (and thus the full Senate vote thereafter) for a week. That would give the FBI time to carry out a rush job of a helter-skelter background investigation that was supposed to reach back to events before the nominee’s 18th birthday, and thus his suitability for this lifetime appointment.

All week long, in an increasingly yuck factor exploration, the country gained a more thorough understanding of Kavanaugh’s beer-drenched high school and university years, and a number of apparently popular sex games among his set; and, more generally, a look at the charmed, entitled life he had led as a Washington, DC area rich kid, a prep school jock (but good student), circa 1980. Accordingly, in full pushback mode, there were his efforts to contort his frat boy-style past and recast them into a more benign, nearly choir boy youth – including an unprecedented Op-Ed in the Wall Street Journal framed as a kind of non-apology apology for any youthful “indiscretions” and his use of over-excited language before the Senate committee.

And as the week wore on, President Trump increasingly released himself from his own self-imposed restraints, and began to mock and bitterly attack Ford in a series of campaign rallies across the country. In case anyone has forgotten, the US midterm election is now only a month away and Trump has been venturing deep into “Red State Land” to consolidate voting for his favoured candidates.

By the time the committee vote took place, and with Alaska Republican Senator Lisa Murkowski’s refusal to vote with her party, the president promised her she would face the wrath of her party, the voters, the nation as a whole, and the Flying Spaghetti Party as well (okay, not that last one). On the other hand, as Maine Republican Senator Susan Collins finally came down on the side of the nominee, which prompted dismay and promises that she would be facing the wrath of Maine’s voters when she comes up for re-election in 2020. The Capitol Building and senatorial office buildings had meanwhile come under pressure by large numbers of mostly female demonstrators pushing hard for senators to vote no.

Now, with the vote taken, the court will be coming under growing stress as a result of this increasing politicisation. (Political feelings about nominees reach back to Robert Bork’s nomination in 1986, but never to this level of anger.) The country will now be watching closely as cases come before it if decisions are split along clearly partisan lines. And observers, politicians, and the country as a whole will watch especially closely to see if Kavanaugh lines up routinely and automatically in favour of positions espoused by the incumbent president. Historically, in earlier White House jobs, he had argued for an expansive view of presidential power – and for a president who can do little wrong, except when he was writing those sexually explicit questions for special prosecutor Ken Starr to ask Bill Clinton in interviews that led up to his impeachment proceedings.

Accordingly, people will be sitting in judgement as to whether Kavanaugh hews to his own words, spoken at a lecture at Catholic University in Washinton, DC, back in 2015. At that time, he had said, “A good judge, like a good umpire, cannot act as a partisan… If you are playing the Yankees, you don’t want the umpires to show up wearing pinstripes [the Yankees trademark uniform].”

But the immediate test is going to be the way this confirmation plays out just a month from now when the midterm election takes place. Republicans are fearful they will lose control of the House of Representatives if the fallout from the Kavanaugh vote mobilises numbers of female voters – middle class, white, college educated, suburban – districts narrowly won by the GOP previously. But this time, the fear is that they will vote with an anger stemming from the rhetoric and action on behalf of the court nominee, as epitomised by his testimony and demeanour – as well as that of the president.

Contrawise, it is just possible a contrary wave of Kavanaugh and presidential supporters may nudge the Senate results slightly more towards Republicans. A disproportionate number of the one third of the Senate up for grabs consists of potentially vulnerable Democrats in states carried by Donald Trump in 2016. Still, one of the primary axioms of politics is that a loss galvanises the loser much more than it does a winner. With the Democrats on the losing side of this one, everyone will be watching to see just how much, and most especially who, is so galvanised to create a furious backlash against the political status quo. DM