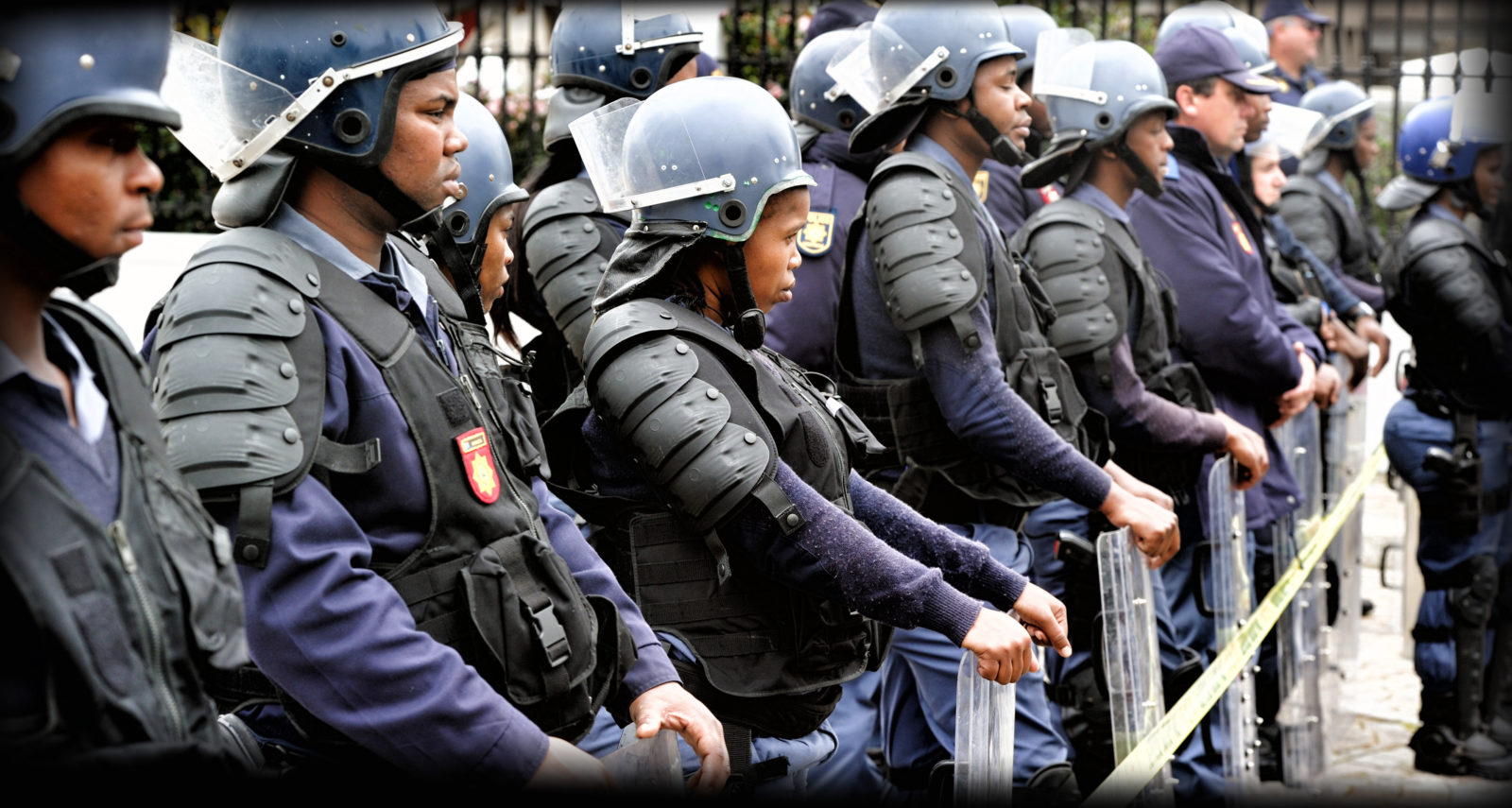 Parliament senior manager Lennox Garane’s recent suicide after 18 months of workplace bullying is being (mis)used by the SAPS to ratchet up security to unprecedented levels in a show of kragdadigheid. And the People’s Parliament, where public access is a constitutional imperative, is being reduced to just another government installation.

The day after SAPS national commissioner Lieutenant-General Khehla Sitole and Police Minister Bheki Cele were requested by MPs worried about the militarisation of Parliament not to haul out the “sledgehammer to kill a fly”, security was stepped up.

The SAPS last week told MPs it was the SAPS that was in charge to “safeguard the Parliament as a strategic government installation and to ensure the safety and protection of VIPs within the parliamentary precinct”. And the SAPS responsibilities include “screening of the person who seeks access to determine if the person is a legitimate visitor and whether his/her reason for visiting the premises is a valid one”.

The Parliamentary Protection Services (PPS), which since 1994 has been in charge of security at the democratic Parliament, was relegated to admin such as issuing permits and keeping records of access. In one fell swoop the SAPS demoted long-established practice and institution at Parliament whose security policy talks to the protection and safety of everyone at Parliament – and honours Parliament as the People’s Assembly. The PPS is similar to the security entities in parliaments elsewhere in the world.

What is happening now at Parliament is not targeted, purposeful security with considered measures that mitigate risk and manage vulnerabilities – the kind of security that enables and facilitates the purpose of Parliament – the People’s Assembly – with a minimum of inconvenience and a focus on retaining the dignity of people, be they staffers, blue collar workers, managers, parliamentarians or visitors.

What is unfolding now is a display of kragdadigheid the SAPS relies on in its one-size-fits-all security approach, with a good dollop of neurotic smoke-and-mirror security games. Security matters now because die kolonel is hierso (the colonel is here).

Yet, the Constitution has imposed an obligation on the National Assembly and National Council of Provinces (NCOP) in Sections 59 and 72 respectively that they “must facilitate public involvement in the legislative and other processes” both in the Chambers and in committees, “conduct its business in an open manner, and hold its sittings and those of its committees, in public”. These sections allow “reasonable measures to be taken to regulate public access” and “provide for the searching of any person…”.

And the 2004 Powers Privileges and Immunities of Parliament and Provincial Legislatures Act puts the presiding officers – National Assembly Speaker Baleka Mbete and National Council of Provinces (NCOP) Chairperson Thandi Modise – firmly and fully in charge of everything that happens in the whole of the parliamentary precinct. Security forces may only be on the precinct, unless there is an imminent threat to life and safety, or property. That’s why special arrangements are made, for example, to serve summonses or legal papers.

But the security cluster long has had its eyes on clinching command and control of Parliament. The creeping securotisation of the Jacob Zuma administration has facilitated this, be it the signal jammers blocking cellphones at the 2015 State of the Nation Address (SONA) or the non-ceremonial soldiers armed with automatic weapons at SONA 2017.

In many ways Parliament has voluntarily conceded space. Garane’s suicide was right off the bat framed in security considerations – “Parliament enhances security…” was the headline on one of the first official statements.

And so, despite vocal opposition from the National Education Health and Allied Workers’ Union (Nehawu) since late 2015, the State Security Agency (SSA) remains on the precinct. And the so-called bouncers, mostly former riot police officers, hired with the primary aim of evicting unruly MPs, actually the EFF, are part of day-to-day life at Parliament.

The PPS top post has remained vacant since the suspension and ultimate dismissal of the previous incumbent. While the job was advertised earlier in 2018, six months after the closing date no appointment has yet been announced. Instead the PPS grievance against the acting manager has been pushed from pillar to post for the past three months.

And then there is also the myth, propagated by both the SAPS and the security cluster, but also from within Parliament’s leadership, that the national legislature is a National Key Point. It is not. Only the presidential Tuynhuys office, the ministerial offices at 120 Plein Street and the House are such key points.

Two weeks after parliamentary manger Lennox Garane shot himself in his office – “It’s a protest suicide” said the funeral notice expressing the details of which his family has not been mincing its words – police finally saw, and grabbed their chance to impose security, SAPS-style.

Police with handheld body scanners man all entrances since last Thursday. Everyone from staff to visitors and contractors is redirected – sometimes by police officials stepping in front of them – to access the precinct only via 100 Plein Street, where the lid from a box of a well known photocopying paper brand serves as the container to put cellphones, keys and coins in for easy passage through the X-ray machines.

Suddenly there are delays and queues, and Parliament is not even in session. Previous deployed SAPS have been rotated out to make way for new ones, who are unfamiliar with how Parliament works, or what the institution stands for. After just five days, the parliamentary grapevine has already identified one police officer (name known) as “just plain rude”, with another police officer coming a close second in the past day or two. There have been a series of verbal exchanges at various points; one woman staffer told police: “I was traumatised that day (of the suicide). Now you are traumatising me.”

In one unfortunate incident on Friday, a constable ripped my cellphone out of my hand as I was trying to take a photo of his nametag – “You will not take photos of me”. At issue? I put my bag through the scanner after going through the X-ray machine, not before.

The constable instructed me to take my bags which by then had passed through the scanner back out and start the process again, this time like he told me. I did, but also asked him not to talk to me like that.

“You will not tell me how to talk to you,” was his response.

The unfortunate incident was taken up and someone without reason to apologise has apologised while the person who should have has not; shifts are cited as reasons.

Here are some takeouts from the past five days of the security crackdown.

But that’s just it with this SAPS kragdadigheid, backed up by ministerial cautions about talking security in open forums like committees because of “planners” – it’s haphazard bluster, not real security based on factual threat and risk analysis. Like Sitole had to admit to MPs: with regards to guns coming on the parliamentary precinct, “there is no record”. Ever.

It’s relatively easy to illustrate the kind of different security, and the role and impact of political leadership, in how security is allowed to manifest itself.

The phalanx of bodyguards, including the counterassault unit with their automatic weapons, who surrounded former president Jacob Zuma, are gone. President Cyril Ramaphosa is moving seemingly by himself, also on those Thuma Mina early morning walks with fellow walkers. But make no mistake and think that presidential walking route has not been checked, vetted, and secured with police stationed discreetly and strategically.

Behind the optics of a chilled president in a tracksuit, or business suit, is hardcore security. But it’s security done with consideration, strategic focus, fact based and a clearly defined approach to mitigate risk and manage vulnerability.

The SAPS described as a “dilemma” the role of Parliament as People’s Parliament and security, or as its presentation to MPs put it last week, “People’s Parliament vs security strategy”. No, there’s no dilemma. Nor is there a contradiction. But it’s a choice of how to do security.

And if that choice is to treat Parliament as just another government installation, turning a blind eye to the national legislature’s fundamental role as the voice and the House of the people, South Africa is in bigger trouble than we think. DM