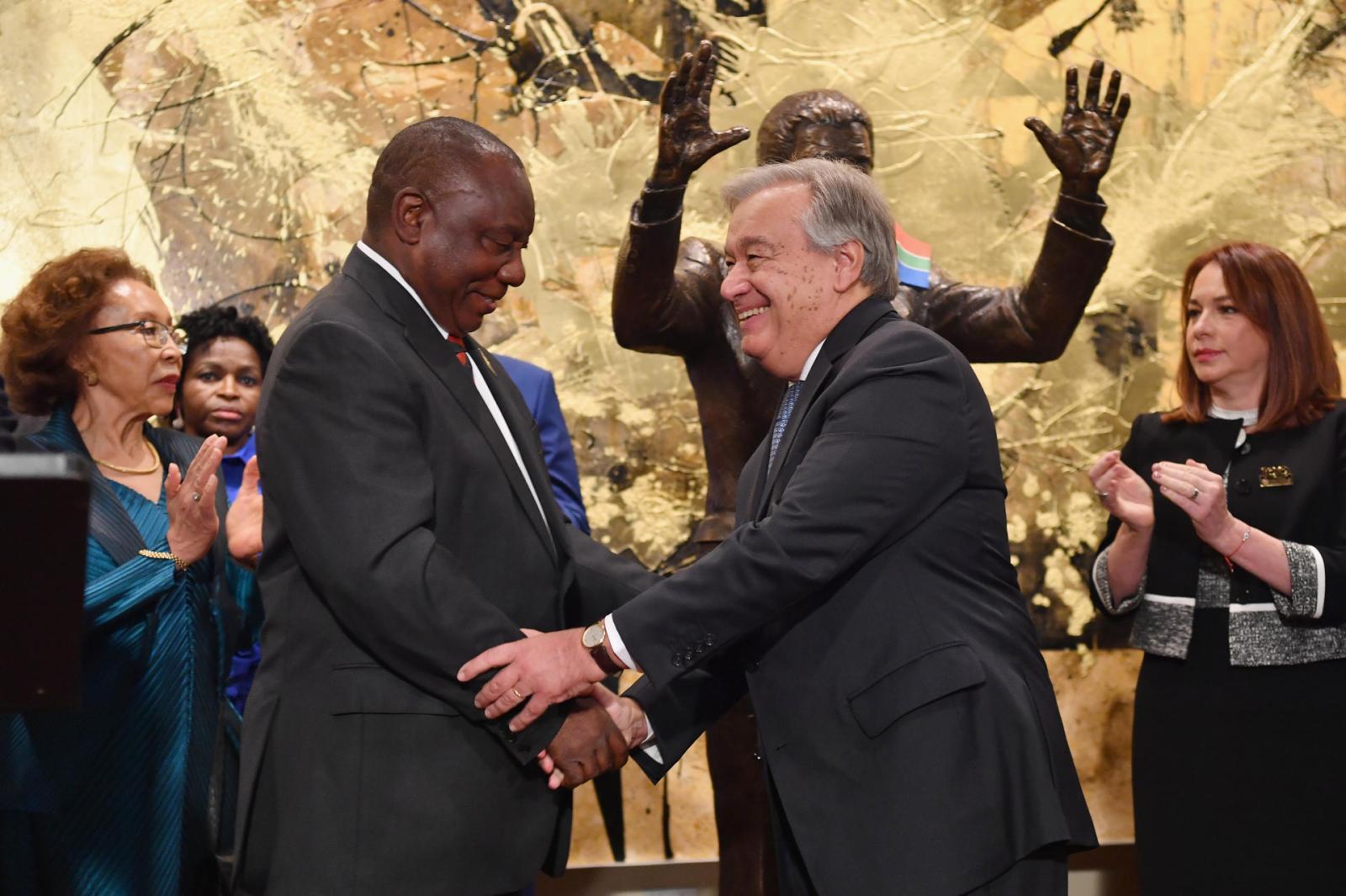 South African President Cyril Ramaphosa (L) and UN Secretary General Antonio Guterres (R) during the unveiling ceremony of the Nelson Mandela Statue from the Republic of South Africa during the 73rd session of the General Assembly of the United Nations at United Nations Headquarters in New York, New York, USA, 24 September 2018. The General Debate of the 73rd session begins on 25 September 2018. EPA-EFE/ANGELA WEISS

To make a difference globally and on the Security Council, details are needed about goals, positions and approaches.  By Gustavo de Carvalho

Last week was South African President Cyril Ramaphosa’s first real chance to present himself to the international community. Throughout his packed schedule at the United Nations (UN) General Assembly, he used the opportunity to remind the world of Nelson Mandela’s legacy.

Coinciding with the centenary of Mandela’s birth, this strategy worked when calling for more effective global approaches to peace, security and development. It was also effective in restoring some legitimacy to South African foreign policy, which was tainted under former president Jacob Zuma’s tenure.

But what does Ramaphosa’s busy time in New York reveal about South Africa’s foreign policy priorities and strategies? And is economic diplomacy, as is widely expected, dominating the country’s approach on the global stage?

Ramaphosa attended a UN Private Sector Forum lunch, a seminar on business opportunities in South Africa, and a round table on investment in South Africa hosted by Michael Bloomberg.

At all three meetings, Ramaphosa marketed the country as a promising investment destination – in line with his goal set earlier this year of attracting $100-billion over five years. He made the case by drawing direct links between economic development and peace and security, particularly in Africa.

Connecting security and economic development isn’t new to South Africa’s foreign policy. But it is clear from Ramaphosa’s engagements last week that this approach will be pursued in an increasing deliberate manner. He rightfully asked UN member states to question how the global body could better secure lasting peace and economic development across the world.

Given his focus on linkages between peace, security and development, it was surprising that Ramaphosa’s speeches in New York made little reference to South Africa’s goals during its upcoming UN Security Council term. During its two-year tenure on the Council, which starts in January 2019, South Africa’s foreign policy will increasingly be tested and questioned.

As things stand, the country has a lot of catching up to do. The Institute for Security Studies (ISS) spoke to government officials, civil society and academics in New York in March 2018 and all agreed that South Africa’s foreign policy has become less visible and less consistent over the last few years.

The ISS research is being conducted to strengthen South Africa’s approaches to peace, security and development in Africa, including during its Security Council membership.

The international community is eager to understand what South Africa has to offer, and how it will manage high expectations. Certainly, the country should not respond only to external demands, but it does need to clearly communicate its goals, positions and approaches.

This is especially important considering that the Security Council is dealing with some stark divides. Permanent members have faced a virtual paralysis on Syria, but also regarding conflicts in Yemen and Ukraine. Such paralysis has also affected Africa, for example when Russia and China blocked a Security Council decision on Burundi that would have infringed the country’s sovereignty.

Some of Pretoria’s intentions were revealed in Ramaphosa’s call – during his General Assembly speech – for the UN to become a more effective instrument for mediation, peacekeeping and post-conflict resolution. South Africa has experience in all three areas.

It has been active in appointing mediators to countries like Sudan, Burundi and Madagascar. Thousands of South African troops have been deployed to UN peacekeeping operations, including an important contingent in the UN Stabilisation Mission in the DRC (MONUSCO).

Pretoria has also advocated for longer-term approaches to conflict resolution, including through bilateral support to post-conflict countries, often via its African Renaissance Fund.

But prioritising the future of MONUSCO may not be enough for South Africa to contribute to sensitive Security Council discussions on the effectiveness of peacekeeping, mission mandates and the allocation of limited resources.

Together with other elected members, also called the E10, South Africa will have an opportunity to bridge divides and propose solutions. E10 members have in recent times found creative ways to play a more effective role in the Security Council.

Through strategic alliances and greater cooperation, they have been able to exert some influence. Australia and Luxembourg, for example, were key in drafting decisions on humanitarian access in Syria, a role that was recently taken up by Sweden.

The key question for South Africa is how it will position itself in relation to other Security Council members. A focus on economic diplomacy could mean balancing competing interests between traditional partners in the West and BRICS partners in the Council. To do so, Pretoria may have to avoid big ideological battles in its voting patterns, particularly regarding non-African issues.

South Africa has the advantage of having served on the Security Council from 2011 to 2012. This provides important institutional memory and capacity to deal with a structure that is highly procedural and requires well-resourced multilateral capacity.

To be effective, South Africa’s mission in New York (and relevant desks in Pretoria) needs qualified and seasoned diplomats. Key partnerships with other Security Council members should be crafted, including in the E10. Timely and clear communication on the government’s vision and how it will be achieved is also essential.

By drawing on Mandela’s legacy, Ramaphosa’s speeches in the UN show that South Africa’s foreign policy clearly connects economic development and sustainable peace, particularly in Africa. But if the country wants to make a difference at the global level and especially in the Security Council, details are needed about how it plans to do so. DM