South African YouTubers share the love – and go on tour 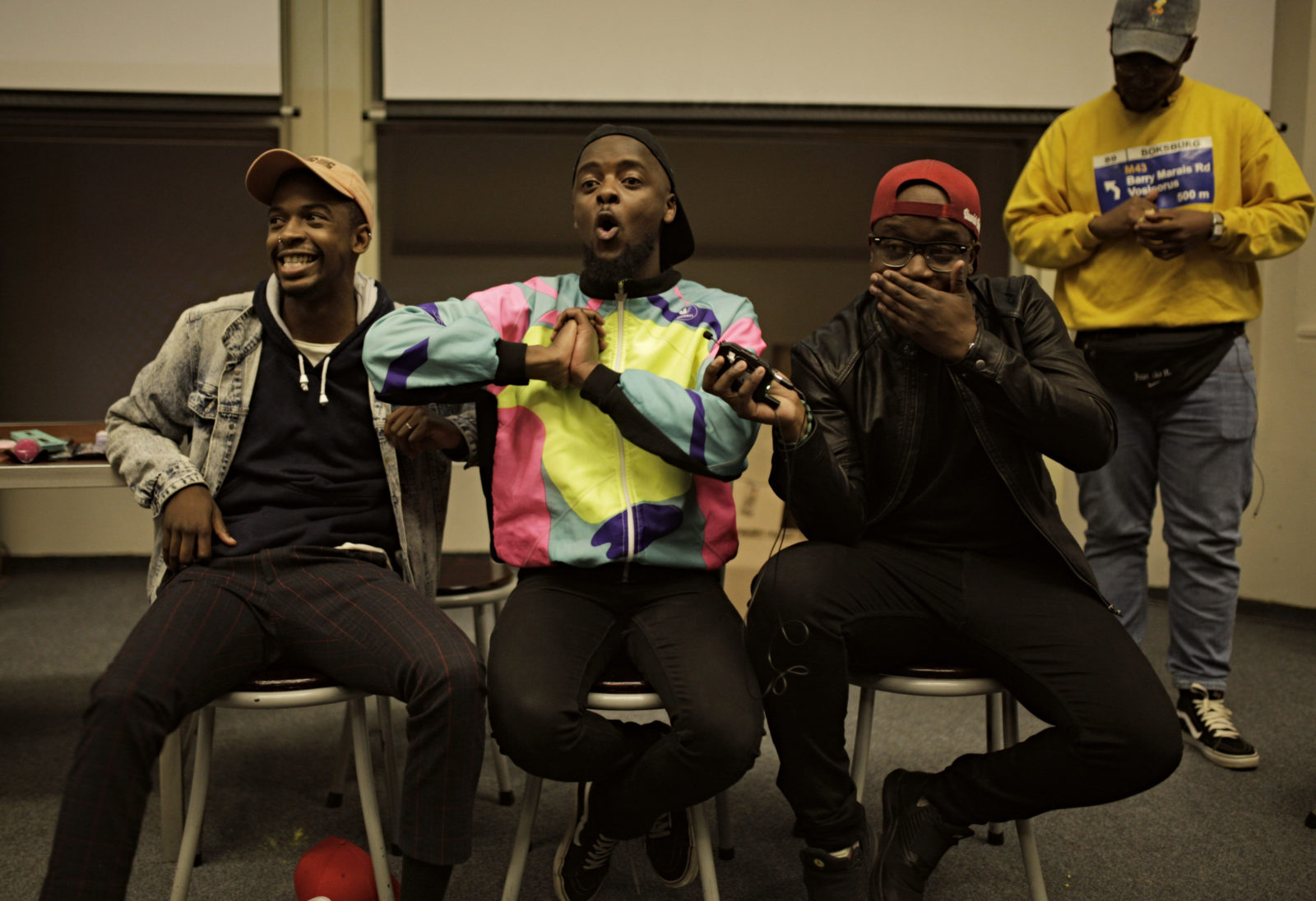 Sipho Muchindu and Sphakamiso Sphaka Ngonyama asked an audience member to join them and re-enact an episode of Microwave Boys. Photo taken on 19 September at University of Cape Town. By Hlumela Dyantyi.

South Africa’s favourite YouTubers, Sibu Mpanza, Okay Wasabi, the MicroWave Boys and Pap Culture visited Cape Town, Durban and Johannesburg on a first-of-its-kind national tour during September . The launch of a new data-friendly version of YouTube, YouTube Go, was featured as part of the tour.

The tour was the brainchild of Moyin Oloruntoba, a South African lifestyle YouTuber with over 11 000 subscribers.

Oloruntoba says she called a few of the YouTube creators, shared her idea and they were excited about it. She said to SABC:

“I pitched it to YouTube and they were like ‘this is could work because we are also launching something amazing’.” This was the YouTube Go app.

YouTube has been at the forefront of making its content more available to users. A previous development available to Android users saw it allow people to download videos from the app when they were in a WiFi zone or when they had data to watch offline later.

YouTube Go is a separate app that allows viewers to download videos and also share the videos among themselves using Bluetooth. It also allows users to choose the size or quality at which they would like to open their video – size and quality of videos impacts on the amount of data needed to view and download them.

YouTubers who were part of the tour, including Sibu Mpanza, a digital entrepreneur and YFM radio presenter; Cynthia Gwebu, a South African beauty and lifestyle YouTuber; and Microwave Boys member Sipho Muchindu, welcomed the latest development.

In the last three years, there has been a growth in the number of South African youth participating in and creating content on YouTube.

Daily Maverick spoke to George “Okay Wasabi” Mnguni, Sphakamiso “Sphaka” Ngonyama of MicroWave Boys, and the Pap Culture trio, Nwabisa Mda, Thembe Mahlaba and Bongeka Masango during the Cape Town leg of the tour on the growth and potential of YouTube.

“Phones are getting better and cheaper, data prices are slowly getting lower, as things go by we will see YouTube grow even more in South Africa,” he said.

Okay Wasabi refers to himself as one of the pioneers of digital skit comedies in South Africa, having started making them as far back as 2015. One of his YouTube channels is with his girlfriend Sasha Langa while the other is with his friend Dali Dangerous. Okay Wasabi and Dali Dangerous’s very popular segment Kota past nine features vlogs where they visit the best Kota spots in Johannesburg, tasting and critiquing them.

Okay Wasabi, whose real name is George Mnguni, says that when he started his YouTube channel he was using it as a launchpad to get on to TV.

“From the beginning, my plan was to use YouTube to get on TV. Being on TV has been my biggest dream ever since I was a kid.” Wasabi says that although this may still be his dream, he has come to realise that on TV, creativity is limited while YouTube allows him full creative freedom.

Despite this, he says that given the opportunity he would use both mainstream media and YouTube to further his career and reach.

“I will balance both because at the end of the day there is a bigger audience on YouTube because YouTube has an international audience which can watch from another country where there is no SABC,” says Okay Wasabi.

Since starting his YouTube channels Mnguni has been on two South African productions, including The Queen on Mzansi Magic and social commentary show TIA on BET.

Another popular YouTube show that has been able to move into mainstream media, without losing their YouTube presence is the Microwave Boys on Menzi Mzimela’s channel Anarchadium.

Sphakamiso “Sphaka” Ngonyama makes up one-third of the trio, along with Sipho Muchindu and Larry Mncube-Nhlane, a seasoned South African entertainer.

Originally from Cape Town, Sphaka described his decision to make the big move to the City of Gold as one of the most difficult decisions he has ever made.

Doing autocue for Don’t Look Down Productions in Johannesburg, Sphaka slept on his sister’s couch for four months and said he earned as little as R2,500 per month for the first three months.

“I started from ground zero. 2016 was a very depressing time, very hard and very confusing. I’d think, I don’t know where I’m going, am I going to achieve my dreams, is this even worth it,” he said.

Sphaka’s passion and determination to make it into the entertainment industry encouraged him to never give up.

He worked with shows such as V Entertainment, Turn Up and The V-Table, and Mncube-Nhlane – a co-presenter on The V-Table – developed an interest in Sphaka because of how his sense of humour and charisma entertained everyone while shooting in the studio.

Mncube-Nhlane said Sphaka was one of the funniest people on set and deserved to be on camera because he was always cracking jokes during the breaks. He recruited him to join a new YouTube show – MicroWave Boys.

“The first thing I told him when he asked me to join the MicroWave Boys was. ‘wow, that’s a really crap name’,” Sphaka said.

On the tour, Muchindu described the meaning behind the name which was met with a great “aha moment” from audience members.

“You know when you’re at work and you’re heating food up in front of the microwave, the banter and the chats, small talk on news and stuff that happen there, that’s basically the whole meaning behind the name. That’s who we are.”

MicroWave Boys has now gone on to be one of South Africa’s most successful YouTube shows.

“By episode 8 we were clocking 20,000 to 30,000 views and we were like wow this is different, people love it. Now I do another show called Gate Crush with Sphaka on Zkhiphani (a local website). I’m trying to venture out on my own right now while still with Microwave Boys. I’m nowhere near making it but I’m enjoying the journey.”

Sphaka now works in the online/digital space full time. He says that even if opportunities to be on television come and he takes them, he will continue to do YouTube.

“I make money from everything online. I love online because it has so much potential. Once it (YouTube) blows up, and I’m telling you, it is going to blow the hell up, we will be the pioneers of this space. They will be looking at MicroWave Boys and everyone here (popular YouTubers at the tour) and they will be saying, everyone who came after them followed in their footsteps.”

Sphaka warned up and coming YouTubers to be aware of their content and their reach and to demand what they are worth when they are approached by brands.

“Know your worth, don’t just do YouTube for money, do what you love. Brands will book you at clubs and say they will pay you with alcohol, that’s not on. Ask yourself will I benefit from this if I do it for free?”

“Don’t start a YouTube channel because you want to attract brands, it will be evident that you are doing this to attract people. When you do get to the position where brands want to work with you, don’t fost the unfostable.” This is Okay Wasabi’s way of saying you must not force matters.

“I had a brand hit me up last month, it was an alcohol brand, they were probably paying a lot of money. But I don’t drink, I don’t smoke so I obviously had to reject. Do not do things because there is an opportunity, work with brands you like and value,” Okay Wasabi said.

Nwabisa Mda from Pap Culture, a trio of woman content creators who share weekly videos on a variety of topics and themes relevant to young black South Africans, says collaborating with a brand is a double-edged sword.

“People don’t understand how to use it effectively and efficiently,” she says.

“As inclusive as the YouTube space is, we are still a minority on the platform. With the few who are pushing through, we are pushing through really hard. The MicroWave Boys pushed through, they are now on radio, and TV. They are pushing YouTube to other mediums, but it would be great if there were lots more of us taking over the space,” says Mda.

Mda spoke on the importance of collaborating and working on YouTube and how that can aid all YouTubers:

“There are some bitter people who look at us and be like ‘why do they get the chance?’ That is because we are supporting each other, and we want to see everyone succeed. If we know about someone’s channel, we will support them.”

Responding to a question about how people who do not have access to the latest technology can enter the YouTube space, Mahlaba says:

“A lot of people started from nothing, if you think of Moshe Ndiki and the pixelated camera he was using and the videos that you loved, it was about the content, not about the HD, if you can really hear or if it was quiet in the background.”

Moshe Ndiki is now a popular South African actor, presenter and all-around entertainer. He started out making videos and posting them on YouTube back in 2013.

“People on the outskirts should start their own support systems in those communities, you probably have a friend who has an iPhone, borrow each other that one iPhone. The only way to stay afloat on the platform is to support each other.” DM