If it takes me until I die, I will seek justice for my son – anguished Cape Flats mothers 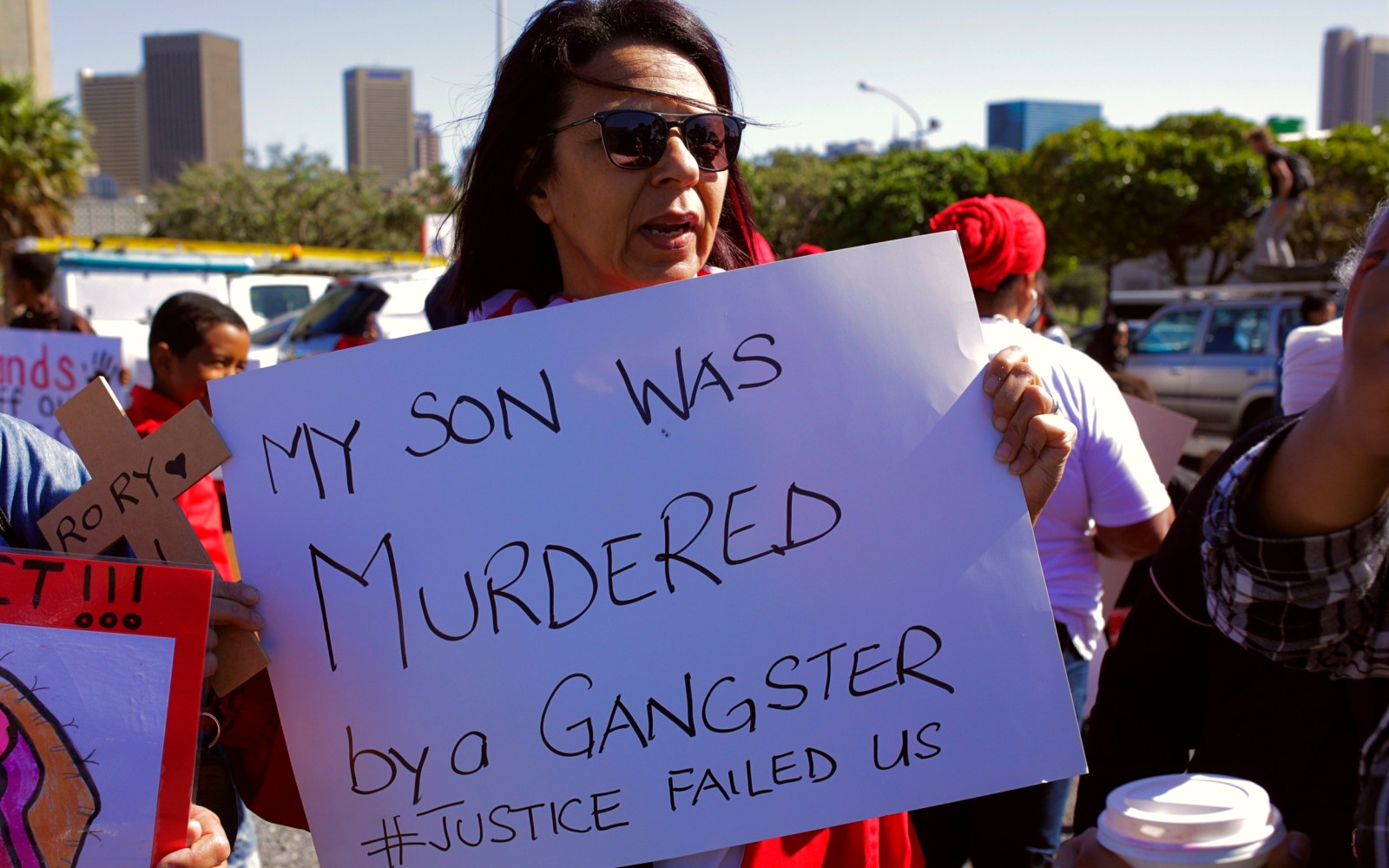 Lesley Wyngaard is one of many mothers who have lost their children to gang violence. (Photo by Aphiwe Ngalo)

Battle fatigued mothers and children affected by gangsterism and crime took to the streets of Cape Town on Wednesday, pleading with national and provincial governments to step up efforts to end the cycle of violence that torments communities on the Cape Flats.

“All I am seeking is justice for my son.”

This was the precise comment from not one, but two mothers from different areas on the Cape Flats. The mothers, Washiela Samuels and Lesley Wyngaard, lost their sons three years ago as a direct result of gangsterism.

The mothers took part in a #TotalShutdown march on Wednesday — calling not only for justice for their sons, but for an end to violent crime, gangsterism, child rapes, police brutality and poor service delivery.

Her son was in Mitchells Plain for a 21st when rival gangs started shooting at each other. He died 20 minutes after being hit. It was a case of “wrong place, wrong time”, she said.

Wyngaard described her son as “in the prime of life”. He had just been promoted as a manager at his workplace, but was killed before he could start his duties. Before he died, Rory “was saving up for lobola” to marry his girlfriend.

Rory was killed two days before his younger brother’s birthday and, as a result, the brother dropped out of college.

Although a suspect was arrested, the case came to naught. The accused committed another crime, but escaped custody. Then the docket went missing, Wyngaard told Daily Maverick. He was charged and convicted in the Mitchells Plain Magistrate’s Court for the other crime and received a five-year suspended sentence. He never went to trial for Rory’s murder.

“I wrote to the NPA about the poor service I’m receiving at the Mitchells Plain court,” said Wyngaard, who approached an advocate at the Cape High Court to assist.

Wyngaard is part of Moms Move for Justice, a support group for mothers who have lost their children to gangsterism on the Cape Flats. The group was launched in 2015, after founding mother Avril Andrews’s son was killed in Mitchells Plain. The group works in areas such as Hanover Park, Parkwood, Mitchells Plain and Manenberg.

Wyngaard told Daily Maverick the support group of 30 mothers counsel one another and provide support by acting as a liaison with SAPS and the department of Justice and Correctional Services. At the moment, the group supports mothers with cases at Mitchells Plain, Athlone, Wynberg and Cape Town courts.

During Wednesday’s march, a group of about 10 members of the group walked together.

The other mother, Washiela Samuels from Hanover Park, lost her 32-year-old son Ashraf in 2015 as he was returning to his home after dropping off his child.

“Probably five minutes later, children came running. I saw him lying there and told him: ‘Assie (his nickname) mammie is hier [Assie, mommy is here]’,” Samuels said on the outskirts of the march at Parliament.

In tears, the single mother said: “Why did they have to kill my son? He was not a gangster, he was my son.”

Her young grandson repeated a year at school because he was traumatised after his father’s death.

Nobody had been convicted of the killing, said Samuels.

“They got the one and let him go because there was not enough evidence or witnesses,” said Samuels.

“They’re all out. We look the perpetrators in the eye. We see them every day.

“Never mind if it takes me until I die, I will seek justice for my son,” said Samuels.

Also part of the march was the mother of 19-year-old Abdul Mutaalib Stevens, who was stabbed to death in September 2018.

His heartbroken mother Zuleiga Stevens said: “All I want is justice for my son. He didn’t deserve to die like that.”

Her son was on his way home when someone approached him with a knife.

“He asked the boy to put his knife away and the boy refused.”

Her husband Suleiman — a bus driver — joined his wife on the march.

“It’s very sad and (we are) heartbroken,” he said.

Zuleiga Stevens said it took two weeks for the suspect’s mother to turn the suspect in.

“What about my son?” she said.

During the march, a memorandum was handed over by the newly formed Western Cape United Safety Forum. Demands include putting an end to gang violence in communities, public safety at railways and regular patrolling in industrial areas. The forum also demands that government fire and charge police officers involved in gang violence and for firearms to be banned and removed from communities.

Outside Parliament, Beukman told the crowd that a meeting would be held later in the afternoon with representatives of the #TotalShutdown network. DM