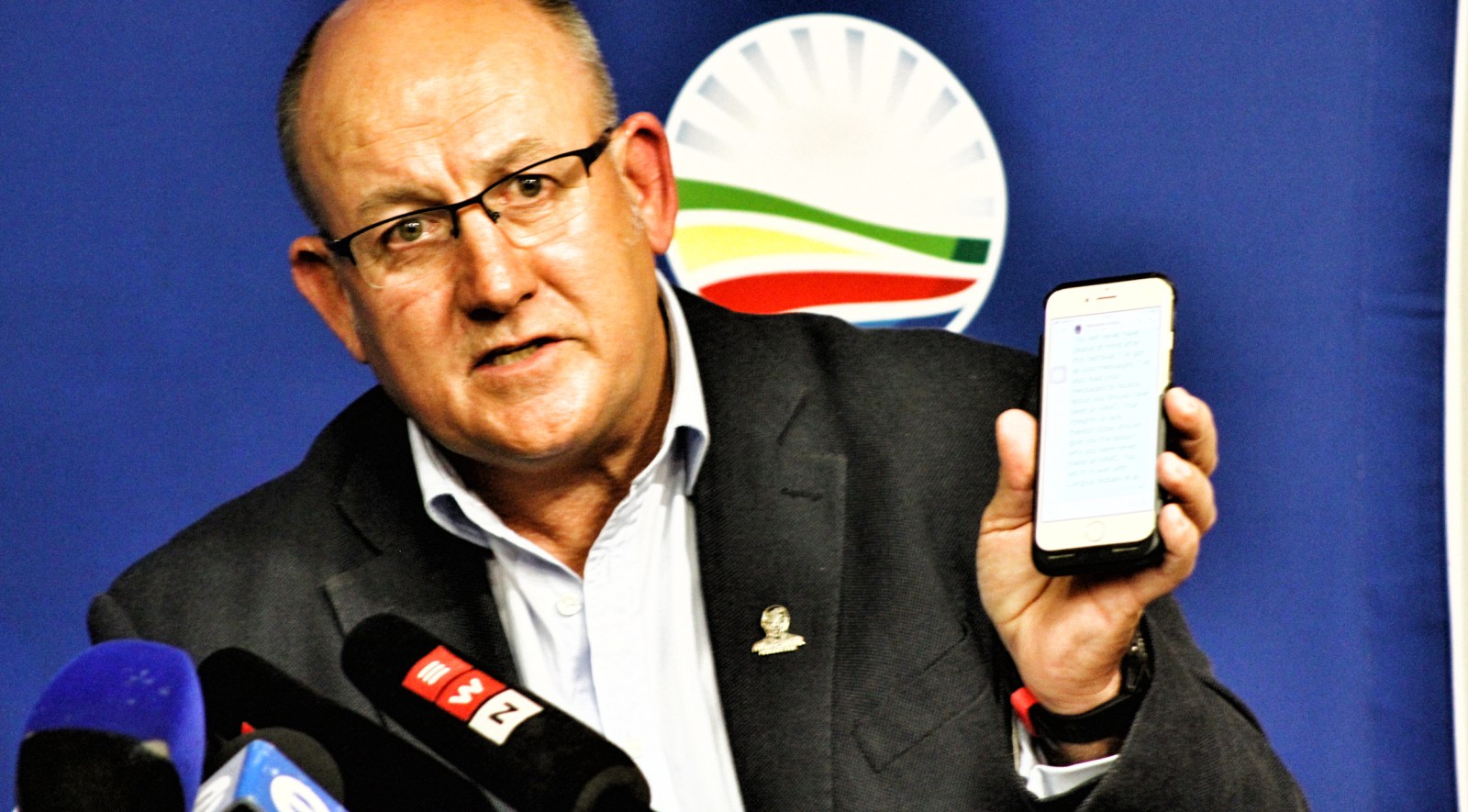 Ousted Nelson Mandela Bay mayor Athol Trollip during a media briefing on August 28, 2018 in Cape Town, South Africa. Trollip and DA leader Mmusi Maimane revealed their plans to challenge the decision to remove Trollip as the process to oust him was sham. (Photo by Gallo Images / Daily Sun / Lindile Mbontsi)

Ousted Nelson Mandela Bay mayor Athol Trollip says he is now “under-employed” — serving as an opposition councillor after being overthrown in a coup orchestrated by his former deputy, the UDM’s Mongameli Bobani. Trollip’s relationship with UDM leader Bantu Holomisa is now actively hostile; EFF leader Julius Malema famously urged councillors to ‘cut the throat of whiteness’ and depose Trollip, but despite this, the DA politician is still convinced that coalition governments can work.

When EFF leader Julius Malema announced his party’s decision to help oust Nelson Mandela Bay Mayor Athol Trollip from power, he explained that the party was targeting Trollip for his race.

“We are cutting the throat of whiteness,” Malema famously told supporters in April 2018.

The national DA reacted furiously to Malema’s comments, accusing him of hate speech. Yet five months later, with Trollip finally out of the mayoral office, the DA politician appears to maintain a grudging respect for Malema.

In an address to the Cape Town Press Club on Monday, Trollip described the context in which the DA entered into coalitions with smaller opposition parties after the 2016 local government elections as a process of “helter-skelter” negotiations spanning a fortnight.

“My experience of Julius Malema was very interesting,” Trollip said. “He was arrogant and demanding — but he also stuck to his word.”

Malema did not take a single note during negotiations, said Trollip. Once agreement between the DA and EFF in Nelson Mandela Bay had been reached, however, Malema gave a press conference summarising the arrangement which Trollip describes as “brilliant”.

While Trollip concedes that the DA’s relationship with EFF representatives in the Nelson Mandela Bay metro “went down the toilet” after Malema’s “cutting the throat of whiteness” comments, the DA politician does not appear to bear any particular grudge towards the EFF leader.

The same cannot be said, however, for Trollip’s attitude towards UDM leader Bantu Holomisa.

On Monday, Trollip produced a thick sheaf of documents and brandished them at his audience. He said the papers were letters he had sent to Holomisa expressing concern about the UDM’s Mongameli Bobani — the man who served as deputy mayor to Trollip’s mayor, and who has now taken the mayoral seat.

“Bobani is corrupt. He represents everything I abhor in government,” Trollip says.

He accuses Holomisa of being aware of Bobani’s alleged multiple acts of wrongdoing but failing to take action — and also says that Holomisa is a “stranger to the truth”.

Trollip claims he is gathering evidence that the UDM took “bad, dirty money” in the run-up to the 2016 elections, but did not elaborate on this allegation.

The source of the conflict with Bobani, Trollip says, was the fact that the DA stopped the payment of a number of excessive contracts. This prompted “extraordinary outbursts” from Bobani and saw the UDM politician begin to vote against the DA in contravention of the coalition agreement between the two parties.

The fact that parties can break a coalition’s co-governance agreement without evident consequences is one of the issues that Trollip identifies as a major challenge to South Africa’s current coalition system.

In retrospect, he concedes that the two weeks taken by the DA to form a coalition to govern in Nelson Mandela Bay after the 2016 local government elections was insufficient.

“There was very little preparation to align policies or principles,” he says.

Asked why the DA would go into coalition agreements with a party such as the EFF, which has obviously conflicting policy positions, Trollip indicated that it was a matter of necessity to gather the necessary support to govern.

“Why would we be in politics if we didn’t want power?” he asked.

Trollip ruled out the possibility of a coalition between the DA and the ANC after the 2019 elections, however — unless a “schism” takes place in the ANC which would see figures such as deputy president David Mabuza and ANC secretary general Ace Magashule form a breakaway faction and effectively exit the party.

In that scenario, the DA could potentially form a coalition with more “moderate” remaining members of the ANC leadership, Trollip said.

Looking back on the circumstances which saw the DA lose control of the Nelson Mandela Bay council, Trollip suggested that such upheavals are the result not just of the instability inherent to many coalitions, but also to the expediency of individual councillors.

“Every time there’s an election [coming up], you have a series of defections,” Trollip said.

“It happens out of self-interest and self-importance.”

He suggested that when black councillors defect from the DA, they do so with a now familiar script: “The DA is racist, there’s baasmanskap…”

In reality, maintains Trollip, “we’re the only party that actually represents all South Africans”.

Now that a court has confirmed Bobani as the legal mayor of Nelson Mandela Bay, Trollip has been relegated to the position of an ordinary opposition councillor. He denied speculation that he might be deployed by the DA to Parliament once again: Trollip served as parliamentary leader for the party between 2006 and 2011, before being defeated by Lindiwe Mazibuko in a bid for the role.

“I have not applied to be a member of Parliament or of the provincial legislature,” Trollip said, noting that the application dates for such roles had passed. But he added that if the party asked him to go somewhere, he would “consider it”.

Despite his bruising ejection from power, Trollip remains bullish about the DA’s chances in Nelson Mandela Bay. He describes the EFF’s support in the Eastern Cape as “quite weak”, noting that in some by-elections the party has received fewer votes than the number of spoilt ballots.

The ability of the DA to govern after the 2016 local government elections, meanwhile, he believes has taught the provincial electorate that “they have the power to change from the ANC”.

Trollip expresses confidence that the new administration in the Nelson Mandela Bay metro will not last long. He claims they have displayed an “inordinate hurry to get their hands on a good cash position ahead of the elections”.

While Trollip says he is content to serve in opposition again for now, he also admits: “I would like to be back in the mayoral chair to complete the project.” DM