The future of the United States

Open letter to American voters: Think carefully about the serious choice you will soon make 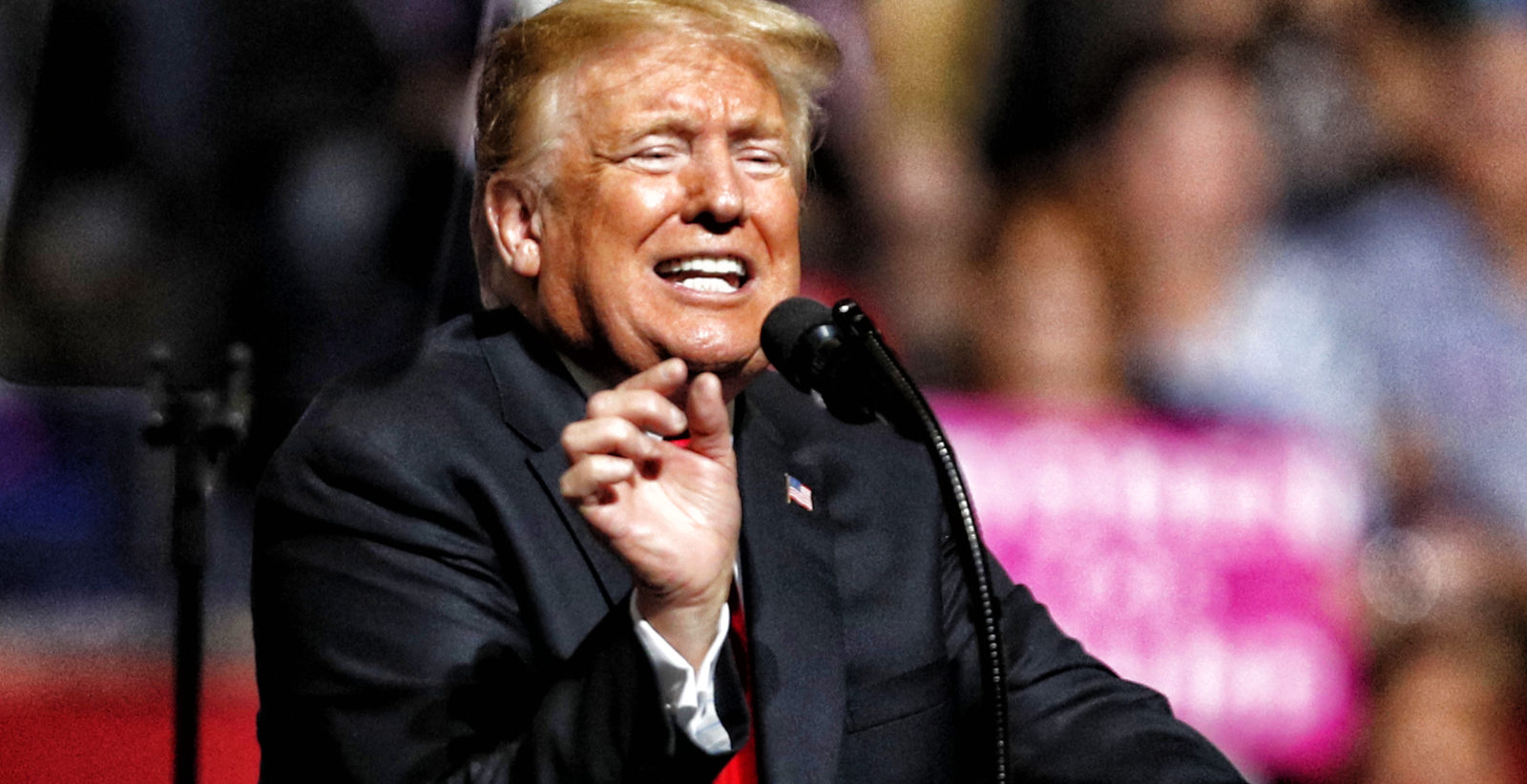 Americans will soon be voting on the House of Representatives and a third of the Senate. Their choices will determine if Congress fulfills its constitutional mandate... And if the US should continue to be lead by the Republicans.

In the past several years I have written the occasional open letter to leaders in South Africa of various parties on important issues of public policy and — less frequently — to American officials, such as to presidential adviser Ivanka Trump. But this time around, I write to all of my fellow citizens.

As some readers know, after retiring as an American diplomat serving in Africa and East and Southeast Asia over some three decades, I now live rather permanently in South Africa. Nevertheless, I remain an American citizen with an active, even obsessive, interest in what happens in my country, and in observing the national temper from afar through reading newspapers, popular publications and a variety of more specialized periodicals, watching the newscasts and by staying in touch with a circle of friends and relatives in the US.

Usually our writing tries to analyse an issue such as the latest international trade proposal for an overseas audience. But this time I want to look at the larger shape of American political life through the lens of an imminent choice by the country’s elected representatives as well as the broader population’s upcoming participation in the midterm election. On that, I want to offer my “two cents” on what it all means for my fellow Americans.

This matters now, of course, because America faces a crucial, probably defining election in just a few weeks that could shape the nature of America’s engagement with the rest of the world for years to come. True, a midterm election is one in which the presidency will not change hands. That can likely only come about via the general election in 2020 — unless an unexpected event such as a resignation, impeachment, or the use of the disability clause of the 25th amendment to the country’s constitution should occur. But depending on how much support or opposition a president has in Congress will have a real impact on how a president can carry out his plans unhindered or subject to more aggressive evaluation and review.

As a result, the issue before American voters is the potential for a rebalancing of strength in the US Congress between the two major parties. Or, in not doing so, and thus choosing “to go with the horse that brung you”, as Americans used to say.

Moreover, the past several weeks have given the world a vivid, even startling demonstration of the importance of the choices that can be made in Congress (specifically, this time by the Senate) — and thus the voters’ ultimate choices about the membership of that Congress after 6 November. For as the millions of Americans who have been closely following the debate know, the Senate Judiciary Committee has been considering the nomination by Donald Trump of a current federal appellate judge, Brett Kavanaugh, to become an associate justice of the Supreme Court, replacing the retiring Anthony Kennedy.

During his years on the court, Kennedy had often been the deciding vote in a body frequently split four-four between liberal and conservative views. As a result, Kavanaugh’s nomination has been widely seen as a way to craft a permanent conservative majority for a generation — especially if Donald Trump eventually gets to fill Associate Justice Ruth Bader Ginsburg’s seat before his time as president finally draws to an end.

After Kavanaugh’s nomination was announced, a number of women began to come forward, claiming Kavanaugh had carried out sexual assaults in his high school and college years. Eventually, the Senate committee was bulldozed into having one of Kavanaugh’s accusers testify before the Judiciary Committee, live on international television, followed by the nominee himself.

It became riveting, astonishing television for millions of Americans who followed it. But I must tell you that millions of foreigners were similarly transfixed by this broadcast as well. While the open, public nature of this real political drama led some to applaud this live autopsy of a man’s life and behavior, it has also led others to question how in the world Americans could even be considering a man with Kavanaugh’s obvious flaws in judicial (and personal) temperament, his sharply phrased political values in support of a quasi-imperial presidency, and his forcibly expressed political bias, to a lifetime appointment to our nation’s highest court.

As things stand now, all Americans — and the rest of the world — will be waiting impatiently for the results of a new FBI review of Brett Kavanaugh’s past, presumably to be completed by the end of this week. And depending on the results of that review, the full Senate will take its final vote — yea or nay — on Kavanaugh. With the ultimate positions of three Republican senators and several Democrats still in the balance, it is now a real-life, but thoroughly made-for-television drama without a final act as of yet. But it will have major consequences for American jurisprudence and politics, either way.

And here is where the choices my fellow Americans will make on 6 November will matter enormously.

A very brief review of America’s constitutional history is important here. As we all learned in our American history and civics courses in high school (unless like a certain Georgetown Prep student, our minds were totally preoccupied by football, brewskis and girls), way back in 1787, the failure of the Articles of Confederation had become obvious to everyone in the newly independent nation.

As a result, men like Alexander Hamilton, Thomas Jefferson, John Adams, Ben Franklin and James Madison had come together to build a more effective, more lasting, more supple government before the new nation had fallen apart completely. These were men who had held responsible jobs in their lives — commercial farming, business, publishing, the law (and yes, some of them were slave holders too).

While they shared the prejudices of their time, they were both careful thinkers and intensely practical men. But they were not abstract, theoretical academics and philosophers. They saw the crisis and sought a solution.

They carefully studied the eventually unsuccessful experiences of most republics throughout history, from the fates of the Roman Republic and Periclean Athens, to the more contemporary Venetian and Dutch Republics. And from that review, they concluded, among other lessons, that too much power in the hands of one part of a government or one office almost inevitably brought down the entire structure or generated system-destroying revolts. But too little in the way of effective government was not much better. Division and a descent into chaos were no answers either.

Under persuasion from Madison, together with several of the others, at a new constitutional convention, they contrived a constitutional arrangement that deliberately designed a more powerful central government. But it was also one where power was distributed between three distinct branches of government and where many aspects of those powers were shared as well.

The chief executive appointed federal judges and senior officials, but the appointments of those same individuals had to be confirmed by the Senate. The chief executive was required to see that the nation’s laws were faithfully carried out, but where those same laws had to be passed by both houses of Congress — including the government’s budgets. The Founders were deeply fearful of an all-powerful, authoritarian ruler ruling by decree and fiat and so they assumed Congress would debate all proposed laws vigorously and fully before acceding to the wishes of a president.

Back when the Constitution was initially proposed, and then adopted, the great divisions in American public life — in a nation of fewer than five million people — were between the more commercial centers of New England and the mid-Atlantic port cities versus the Southern agricultural world and the newly opened up territories of the then-West beyond the Appalachian Mountains. In fact, the current, familiar, overarching division of American political life — political parties — did not yet even exist. But fear of authoritarian rule ran deep and so the idea that Congress represented the will of the voters and that it was the core body of government was given tangible expression by the fact it was defined in the Constitution’s Article I, rather than the chief executive.

And this is where the matter of the nomination of Brett Kavanaugh and the election this November draw together. In about five weeks’ time, you must make choices about who will represent you on the national level, in accord with James Madison’s famous argument that there would not be any need for government at all if all men were angels; but, sadly, they are not.

Instead, the nomination of a rancorous, vengeful, problematic nominee with an apparently troubling past like Brett Kavanaugh helps make the case for a Congress that takes seriously its responsibilities to weigh carefully any presidential appointments. But in the same way, this national legislative body must also take on the role of serious oversight of executive decisions, plans, programs — and, crucially — to investigate potential criminal activity by officials, just as those founders had envisaged Congress’s role over two centuries ago.

It cannot take on the supine role of mindless political support of an equally troubling presidency — simply out of party loyalty. What this means — in less than six weeks’ time — is that voters must weigh the willingness of candidates to challenge the executive branch whenever it becomes necessary — and to exert judgment and a sense of loyalty to the nation writ large, rather than just to narrower, immediate partisan interests.

This kind of choice is far beyond mindless expressions of unswerving party loyalty or to the sub rosa appeals of prejudice and “dog whistles”. The choices, district by district, all across the nation, will be in your hands, come 6 November. Think carefully, research the candidates and their ideas fully, and only then vote with a full knowledge of the consequences if you take this responsibility too lightly.

With best regards and respect,