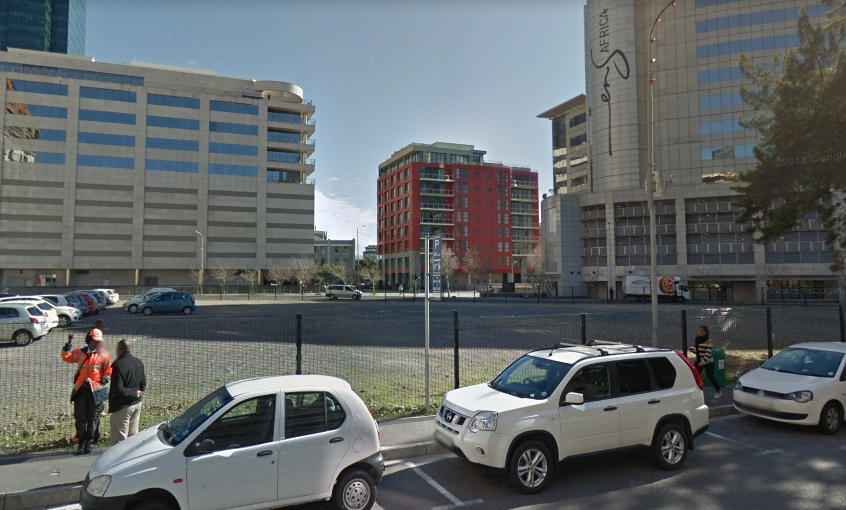 This is the property on the Foreshore that the City of Cape Town sold to Growthpoint. Photo from Google Streetview

Site B appears to have been sold by the City of Cape Town for much less than it was worth. By GroundUp Staff

Mayor Patricia de Lille has requested an investigation into the sale of City-owned land on Cape Town’s Foreshore.

GroundUp previously reported that the City appears to have sold Site B to property developer Growthpoint for less than its market value (see here and here). According to a calculation based on the size of the development that Growthpoint intends to build on Site B, the plot is worth up to R227-million, and not the R86.5-million at which it was sold. The difference relates to the maximum combined floor area that a high-rise building on the site may occupy. Auction documents incorrectly stated that the maximum floor area was 17,500m2, when in fact it was 46,000m2. (This is a slight simplification. Interested readers can read the original article for the details.)

The apparent error was discovered by the housing activist organisation Ndifuna Ukwazi, which has been monitoring and contesting some city centre property sales.

“Following a barrage of media reports… I discussed the matter with the City Manager, Lungelo Mbandazayo, and this week wrote to him to request that he initiates a forensic investigation into what exactly transpired throughout this sale process,” De Lille wrote in a statement released by her office on Sunday.

De Lille wrote: “The erf, also known as Site B on the Foreshore, was sold to Growthpoint Properties through an auction for an amount of R86,5-million. There are allegations that the land was severely undervalued and that this resulted in a loss of R58-million.” (GroundUp’s calculation is that the potential loss is about R140-million.)

“[T]he City could also run the risk of an audit query from the Auditor-General or… a member of the public reporting the matter to the Public Protector,” De Lille wrote.

“It must be swift, the results must be made public and those officials and politicians who are responsible must be held accountable,” the organisation wrote in response to De Lille’s announcement.

Deputy Mayor Ian Neilson was the mayoral committee member for finance at the time of the sale in September 2016. Ndifuna Ukwazi has held him responsible for the error. As reported previously, Neilson disputed that the City made a mistake. He said additional rights for developing a larger floor area on Site B were potentially available, but that Growthpoint “would have to purchase [those rights] from the City in terms of the Municipal Asset Transfer Regulations”.

But Neilson’s interpretation of the law appears to be wrong. The City cannot currently buy and sell development rights on properties.

Ndifuna Ukwazi said that if the City had such rights, it “would fundamentally change the land and property regime as we know it in South Africa”. The organisation said this would be welcome and is done in cities in other countries.

“[B]ut it would seem this is not supported by the current policy and legislative framework.”

De Lille is stepping down as mayor on 31 October, following the resolution of a long conflict between her and the ruling DA. In May, Neilson briefly took over from De Lille as acting mayor after the DA dismissed her, but the decision was overturned in court. DM